Herpes encephalitis is one of the neurological emergencies that can cause serious morbidity and even mortality when treatment is delayed or inappropriate treatment is given. Often it is not difficult to diagnose, but atypic cases can lead to delay in diagnosis and misdiagnosis. In this case report, we aimed to present a case that applied to emergency department with classical acute cerebrovascular event clinic who diagnosed herpes encephalitis later in the diagnostic process.

HSV-1 encephalitis is the most common cause of sporadic fatal encephalitis [1]. The incidence of the disease is approximately 1 in 250,000 [2]. Herpes encephalitis is one of the neurological emergencies because early diagnosis of the disease and the initiation of appropriate antiviral therapy within the shortest time provide a significant reduction in mortality and morbidity [3]. Patients are most frequently brought to the hospital with consciousness alteration, fever, headache, epileptic seizures [4]. Focal neurological deficits may also occur during the course of the disease, but coexistence of aphasia and hemiplegia as the reference findings is not typical. In this article, we aimed to present a case of herpes encephalitis mimicking an acute stroke that applied with isolated global aphasia and right hemiplegia.

A 24-year-old woman was applied to the emergency room with no ability to speak and with loss of strength on the right side. At the medical history, it was learned that she suddenly worsened during the exam and immediately brought to the emergency room. Global aphasia and right hemiplegia were observed on neurological examination. Acute pathology was not detected in cranial CT. In the diffusion MRI, there was a suspicion of diffusional restriction compatible with the field of MCA irrigation on the left, and also no contraindication for intravenous thrombolytic treatment was found because the patient applied in the first 4.5 h, so the patient underwent alteplase treatment. At the second hour after treatment, there was a significant improvement in the patient’s right lower extremity paresis, but the control cranial CT was performed to exclude intracerebral hemorrhage upon the patient’s vulpian symptom development. No hemorrhage was found in control cranial CT. Cranial MRI was performed on the 2nd day of the clinical followup, including diffusion MRI, with encephalitis pre-diagnosis upon body temperature of 40°C and neck stiffness development. MRI was detected at normal limits. No pathology was detected in other scans in terms of high fever etiology. The lumbar puncture made was clear in CSF, CSF pressure was normal, CSF was in normal limits of sugar and protein. Microscopic examination revealed no cells other than 200 erythrocytes. After the patient had one generalized tonic-clonic seizure, control diffusion MR was performed (Figure 1). After diffusion restriction in the inferiomedial part of the left temporal lobe without ADC involvement was detected in the diffusion MRI, intravenous acyclovir treatment with herpes encephalitis pre-diagnosis and intravenous phenytoin treatment as antiepileptic were initiated. EEG was normal with antiepileptic treatment. With antiviral treatment, the patient’s body temperature quickly returned to normal in 24 h. Neck stiffness disappeared on the 3rd day of antiviral treatment. Improvement in aphasia and hemiplegia also began. On the 10th day of the antiviral treatment of the patient, hemiplegia and aphasia were completely improved. In the control cranial MRI performed at 10th day, involvement compatible with encephalitis was detected in the left temporal lobe and the patient’s antiviral treatment was continued for 21 days and discontinued (Figure 2). Figure 1: After the patient had one generalized tonic-clonic seizure, control diffusion MR was performed. 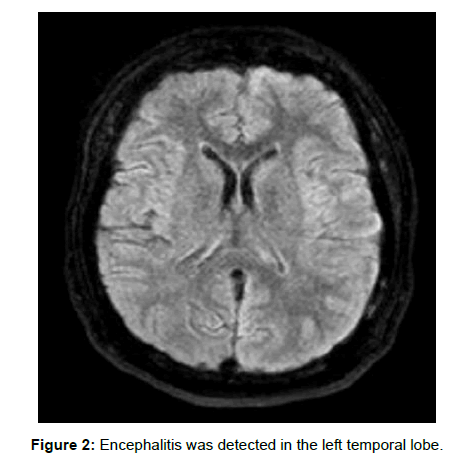 Figure 2: Encephalitis was detected in the left temporal lobe.

One of the first diagnoses to be considered in patients applied with fever and altered consciousness is herpes simplex encephalitis. Delay in diagnosis and late initiation of appropriate treatment can cause serious morbidity and mortality.

Clinical suspicion is the leading step in the diagnosis of herpes encephalitis. However, atypic onset cases can cause delay in diagnosis [5]. The classic symptoms of herpes encephalitis cases at the presentation are consciousness alteration, fever and epileptic seizures. Onset like isolated aphasia and hemiplegia without fever, mimicking stroke, is not a typical presentation. In the literature, the clinical presentation like this case has been presented previously by Abdelmalik et al. [6]. This previously reported case was a 79-year-old woman with multiple risk factors for ischemic stroke and was brought to the emergency clinic with acute onset aphasia and right hemiplegia without fever. In our case that we present, the fact of patient’s being young, the presence of obesity as an ischemic stroke risk factor and the suspected stroke history 15 years ago, being in the therapeutic time for thrombolytic therapy, isolated aphasia and right hemiplegia without fever, the suspicion of diffusion restriction in the diffusion MRI suggested an acute stroke at first. However, in the clinical follow-up, fever, neck stiffness, epileptic seizure and diffusion restriction incompatible with ischemia in the inferomedial part of temoral lobe and the rapid response of the patient to acyclovir treatment suggested the diagnosis of the herpes encephalitis.

The most important viral etiology in a patient with pre-diagnosed encephalitis is HSV, and morbidity and mortality are significantly increased when the disease is not properly treated. Analysis of CSF is an important diagnostic tool in patients with suspected viral encephalitis. The detection of HSV DNA in the CSF PCR analysis took brain biopsy’s place as a diagnostic criterion for herpes encephalitis [7]. In the diagnosis of herpes encephalitis, PCR is highly sensitive (94%- 98%) and specific (98%-100%). However, herpes encephalitis cases with false negative PCR have also been reported previously [8] and it has been emphasized in many publications that especially in the early period of infection, that the BOS PCR result made within 4 days from the onset of neurological symptoms may be negative [9,10]. Lumbar puncture of our case was also performed on the 3rd day in accordance with the literature and the BOS PCR result was negative, but the patient responded well to the antiviral treatment and the improvement of the symptoms day by day did not necessitate lumber punching again.

After herpes encephalitis, recurrences generally occur within the first 3 months after completion of the treatment and have been reported between 5% and 26% [11]. Late relapses are defined as recurrences occurring after 3 months, they are reported as case reports in the literature and are very rare [12]. In our case, the strokelike episode 15 years ago was actually more compatible with the past encephalitis, which seems more compatible because of the current diagnosis of encephalitis.

Herpes encephalitis is a common neurological emergency that can cause serious morbidity and mortality. Clinically, atypic cases have been reported many times and it is a diagnosis to be kept in mind for differential diagnosis of the patient that presented to emergency unit with acute central nervous system findings because with appropriate and timely antiviral treatment, recovery without sequellae frequently occurs.