Both portopulmonary hypertension and hepatopulmonary syndrome are relatively uncommon causes of dyspnoea, but should be considered in patients with portal hypertension in whom other common causes have been excluded. This case study highlights these alternative causes of dyspnoea in patients with chronic liver disease. A 58 year old male with known alcoholic cirrhosis presented with increasing dyspnoea and abdominal swelling. His shortness of breath persisted despite large volume paracentesis. His blood gas revealed a severe hypoxia and a transthoracic echocardiogram showed a severely elevated pulmonary artery systolic pressure. Right heart catheterisation confirmed severe pulmonary hypertension. Liver transplantation was contraindicated due to the severity of the pulmonary hypertension therefore medical treatment was focussed on symptom control. He was started on sildenafil 25 mg three times daily and the patient reported some improvement in symptoms after 3 months of treatment.

Shortness of breath (SOB) is a common presenting complaint and the differential diagnoses are vast. There is a group of patients where the cause of shortness of breath is their underlying liver disease. A common cause of shortness of breath as a direct result of liver disease is abdominal ascites. The fluid in the peritoneal cavity, when in large volumes, can put pressure on the diaphragm. This means the lungs are unable to inflate to full capacity and causes SOB. A hepatic hydrothorax occurs when abdominal ascites translocates into the pleural cavity. This can be managed with diuretics. In some cases a pleural aspiration can be considered for symptomatic relief.

Two other conditions exist which can also cause SOB in chronic liver disease and will be the main focus of this case study; Hepatopulmonary syndrome (HPS) and Portopulmonary hypertension (PPH). These two conditions are both ultimately caused by liver damage but have different pathogenesis, presentation, management and prognosis.

A 58 year old male, with alcoholic liver disease and known cirrhosis, presented to accident and emergency with an eight week history of progressive SOB and increased abdominal swelling.

He reported an 8 week history of increasing breathlessness which had rapidly progressed in the last 2 weeks to feeling short of breath at rest. His exercise tolerance on admission was approximately 5 metres which was limited by his SOB. Five months previously he had been able to walk 200 metres without difficultly. His abdomen had progressively swollen over the preceding 4 weeks. The patient denied chest pain, cough and symptoms of orthopnoea. There had been no preceding viral illness and no history of long distance travel or prolonged immobilisation.

His past medical history included alcoholic liver disease with cirrhosis and hypercholesterolaemia.

He lived with his wife and was usually independent with activities of daily living. He had been abstinent from alcohol for 2 years. He was an ex-smoker with a 40 pack year history.

He had been exposed to asbestos with his previous occupation as a plumber but had no history of keeping birds.

On examination the patient was clinically jaundice and mildly short of breath at rest. The abdomen was grossly distended, tense and dull to percussion, suggesting significant ascites. There were five spider naevi present on the chest. His respiratory rate was 17 and his O2 saturation was 92% on room air. Chest auscultation revealed good air entry throughout the lungs with no added sounds. His heart rate was 92 bpm and is blood pressure was 146/92 mmHg. Heart sounds were normal with an added soft systolic murmur. There was no evidence of hepatic encephalopathy, and he was orientated to time, person and place. There was no asterixis flap, tremor or nystagmus. He was apyrexial.

The patient was diagnosed with decompensated alcoholic liver cirrhosis with gross ascites. It was assumed that the shortness of breath was due to his large volume of ascites. As he was symptomatic he underwent large volume paracentesis and 7 litres of ascites was drained.

The patient continued to be dyspnoeic after his ascites was drained with consistently low oxygen saturation between 91-93 percent. At this point further investigations were carried out to find a cause for his SOB.

With these results the patient was given a formal diagnosis of PPH. He was started on treatment with Sildenafil 25 mg TDS. After 3 months of treatment the patient reported an improvement in his shortness of breath. Unfortunately, for this patient his severe pulmonary hypertension is an absolute contraindication for a liver transplant.

The patient presented at an advanced stage of his disease and so a liver transplant was no longer an option for him. Therefore, this case study highlights the importance to recognising the complications of liver disease such as PPH early so that symptoms can be managed and ultimately mortality and morbidity can be reduced.

The most common presenting feature is dyspnoea. This can be at rest or on exertion and is usually progressive. In advanced cases symptoms such as chest pain and syncope can occur [2]. Physical examination may reveal signs of decompensated cirrhosis and/or right heart failure. Table 4 shows some of the findings that are common. Stigmata of chronic liver disease such as spider naevi and palmar erythema may be present. Chest radiography may show increased main pulmonary artery size or cardiomegaly. Arterial blood gases will show a hypoxaemia. An electrocardiogram may show right axis deviation, right atrial enlargement, right ventricular hypertrophy and right bundle branch block.

Transthoracic echocardiogram will show a raised pulmonary artery pressure among other findings consistent with right heart failure. Diagnostic criteria based on right heart catheter findings are shown in Table 5 [3].

Table 6 shows how the severity of portopulmonary hypertension is categorised [3].

The pathophysiology of PPH is not fully understood. A number of theories have been proposed and the condition is likely to have a multifactorial pathophysiological cause.

The hyperdynamic circulation seen in patients with liver disease causing increased blood flow through the pulmonary vascular bed will lead to increased sheer stress on the vascular walls. This can trigger a cascade of intracellular signals ultimately leading to vascular remodelling [6].

Another hypothesis is that humoral substances which would normally be metabolized by the liver are able to reach the pulmonary circulation through portosystemic collaterals. These include serotonin, interleukin-1, endothelin-1, glucagon, secretin, thromboxane B2, and vasoactive intestinal peptide. Increased levels of vasoconstrictors such as noradrenaline and renin-angiotensin-aldosterone complex and decreased levels of vasodilators, such as nitric oxide and glucagon have been detected in patients with portal hypertension [1,7].

Alternatively, a genetic predisposition may exist. The observation that PPH is infrequent and sporadic among patients with portal hypertension is consistent with this proposal. Genes responsible for PAH have been identified. These or similar gene defects may contribute to PPH [8].

The goal of pharmacological treatment is to improve the pulmonary haemodynamics sufficiently to allow liver transplantation to take place or to improve symptoms. The medications that are commonly used work by increasing vasodilation, decreasing platelet aggregation and any proliferative effects. In the UK the first line treatment is a phosphodiesterase-5 inhibitor. This works by preventing the breakdown of cyclic guanosine monophosphate which increases nitric oxide levels and so enhances the vasodilatory effect. Endothelin receptor antagonists and prostanoids can be used as second line treatments [2]. Other Pharmacological treatments such as diuretics, cardiac glycosides such as digoxin, calcium channel blockers, and nitrates have not been shown to have any significant effect.

The main stay of non-pharmacological treatment is long term oxygen therapy (LTOT). Hypoxaemia is thought to aggravate pulmonary hypertension by increasing pulmonary vasoconstriction [2,9]. Liver transplantation (LT) can be curative for some patients with PPH. However, for those patients with moderate to severe cases of PPH liver transplant is contraindicated mainly due to the increased risk of perioperative morbidity and mortality. There is thought to be a mortality of >50% in severe PPH [2]. Figure 1 summarises the management and recommendations for liver transplantation [3]. 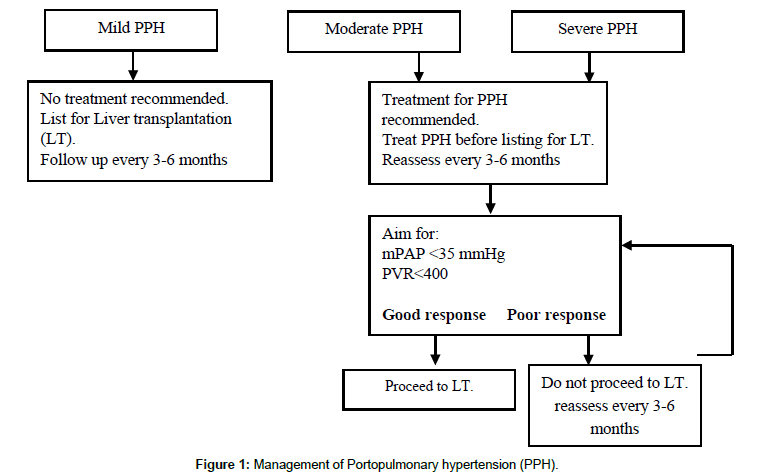 Hepatopulmonary syndrome (HPS) is a separate but related condition characterized by an arterial oxygenation defect induced by intrapulmonary vascular dilatations that is associated with hepatic disease [2].

Most patients with HPS eventually develop dyspnoea usually many years after developing liver disease. Platypnoea is a classic manifestation that is more specific for HPS, but not pathognomonic. This is an increase in dyspnoea when moving into an upright position and relieved by lying flat. You would also expect to find signs of chronic liver failure such as spider naevi in a good proportion of these patients. Chest radiograph and ECG show no changes because of HPS.

The diagnosis is made with a positive echocardiogram and hypoxia in the presence of chronic liver disease. Table 7 shows the triad of characteristics that define HPS [2,7].

The pathogenesis of HPS is also not clear. It is thought that liver failure causes an inability to clear vasodilators, an inhibition of vasoconstrictors and increase in nitric oxide production. This all causes intrapulmonary vasodilatation, which causes ventilation/ perfusion mismatch and shunting [2,7].

LTOT is indicated in patients with severe hypoxaemia at rest. Procedures such as TIPPS (transjugular intrahepatic portosystemic shunt) and coil embolisation have not shown good outcomes. Orthotopic liver transplant gives an 80% chance of complete resolution of disease [2,7]. Table 8 summaries the important features of HPS and contrasts them with PPH.