Background: Diabetes mellitus (DM) is the most prevalent metabolic disease worldwide and is the most potent risk factor for coronary artery disease (CAD). Consequently, finding a clue to diagnose the presence of CAD as early as possible in diabetic patients is very important. Micro albuminuria is a strong and independent indicator of increased cardiovascular risk among individuals with and without diabetes.

The aim of this study was to find any correlation between the degree of albuminuria and the severity of CAD in patients with type 2 DM.

Methods: This was a cross sectional study that included 86 patients with type 2 DM whom underwent elective coronary angiography for suspected coronary artery disease in Mansoura Specialized Medical Hospital from March 2014 till March 2015. Albumin creatinine ratio was determined for all patients and severity of CAD was assessed using the SYNTAX score.

Conclusion: There is a strong relationship between the degree of albuminuria and extent and complexity of CAD in patients with type 2 DM and this association in independent of traditional risk factors.

Type 2 diabetes is a mounting health challenge associated with high rates of cardiovascular morbidity and mortality [1]. In spite of the fact that the seriousness of CVD danger changes between diabetics of distinctive ages and span of illness, numerous patients have sufficient hazard that T2DM has been believed to be a risk equivalent of coronary artery disease (CAD) [2].

Impaired endothelial function is a recognized participator in the pathophysiology of CVD, including hypertension, CAD and DM [3]. Endothelial dysfunction precedes morphological atherosclerotic alterations and has a major action in lesion progress and later clinical complications [4]. Conditions which are accompanied with impaired endothelial function (for example, DM, hypertension, vascular disease, inflammation, and insulin resistance) also may present as impaired glomerular endothelial function (changed permeability), such that micro albuminuria represents a state of vascular endothelial dysfunction, with the kidney being a window to the vasculature in other tissue parts [5]. Chronic renal dysfunction and albuminuria may be important factors determining the occurrence and the severity of CAD [6].

Microalbuminuria is a widely recognized, strong and independent risk marker of cardiovascular disease among individuals with diabetes [7,8]. The presence of microalbuminuria is not associated with endothelial dysfunction and severity of angiographic coronary atherosclerosis in non-diabetic and non-hypertensive patients with acute coronary syndromes [9].

Microalbuminuria is prescient unrelated to conventional risk elements of cardiovascular diseases and entire reasons of death in diabetes or hypertension patient groups and in the general population [10]. It is gaining importance as a marker of atherogenic milieu and indicates the target organ damage and can be a valuable tool in screening and identification of patients with cardiovascular disease [11]. It denotes underlying widespread vascular dysfunction [12]. In asymptomatic patients with type 2 diabetes, microalbuminuria was associated with increased risk of CAD and poorer clinical outcomes [13]. The patients with DM type2, microalbuminuria is an independent predictor of severity of coronary artery stenosis and reveals a positive correlation between microalbuminuria and the Gensini score [14]. Micro albuminuria is associated with the severity of CAD independent of other cardiovascular risk factors [15]. Duration of diabetes and micro albuminuria or macroalbuminuria are important predictors of severity of peripheral arterial disease and left ventricular dysfunction in a cohort of patients selected for the presence of coronary artery disease [16].

This study was performed to assess the correlation between the degree of albuminuria and the angiographic severity of CAD in patients with type 2 DM.

This study was designed as a sectional observational study that included 86 patients with type 2 diabetes mellitus (DM). The patients were underwent elective coronary angiography for suspected coronary artery disease in Mansoura Specialized Medical Hospital from March 2014 to March 2015. The patients with: type 1 diabetes mellitus, patients with eGFR > 60 ml/min/1.73 m2, decompensated liver disease, rheumatic valvular heart diseases, decompensated heart failure, previous myocardial infarction or recent cerebrovascular events (such as brain infarction or hemorrhage) within prior 6 months were excluded from this study.

Patients enrolled in this study were subjected to full clinical history and examination. Hypertension was defined as systolic blood pressure ≥140 mmHg, diastolic blood pressure ≥90 mmHg, and/or the use of antihypertensive drugs. Patients who had smoked within the previous 6 months of entry into the study were deemed current smokers. Patients who used cholesterol-lowering medications or had a total serum cholesterol level ≥200 mg/dl were classified as having hypercholesterolemia.

Data was analyzed using SPSS version 15. Qualitative data were presented as number and percent. Comparison between groups was done using Chi-Square test. Quantitative data was presented as mean ± SD. One way ANOVA was used to compare between three groups. Correlation between ACR and SYNTAX score was tested using Spearman’s correlation analysis. P value< 0.05 was considered to be statistically significant and p value < 0.001 was considered highly significant.

Study protocol was approved by Medical Ethics research Committee of the faculty of medicine, Mansoura University, Egypt and from the mangers of the hospital in which the study conducted. Informed written consent obtained from each participant in the study. Confidentiality and personal privacy respected in all levels of the study. Collected data will not be used for any other purpose.

The patients were classified into three groups based on levels of urinary albumin creatinine ratio (ACR) as shown in Table 1.

Table 1: Classification of patients participated in this study according to the levels of urinary albumin creatinine ratio (ACR).

*P value<0.05 was considered significant. #Hypercholesterolemia was diagnosed if the patient was receiving cholesterol lowering drugs or if serum total cholesterol was ≥ 200 mg/dl.

Table 3: Demographic data of the studied patients based on ACR.

Table 4: Relation between number of vessels affected and ACR.

The SYNTAX score and ACR were significantly positively correlated (p value<0.001), indicating strong relationship between the degree of albuminuria and extent and complexity of CAD as shown in Table 5 and Figure 1.

#Hypercholesterolemia was diagnosed if the patient was receiving cholesterol lowering drugs or if serum total cholesterol was ≥ 200 mg/dl.

Table 5: Demographic data of the studied patients based on SYNTAX score. 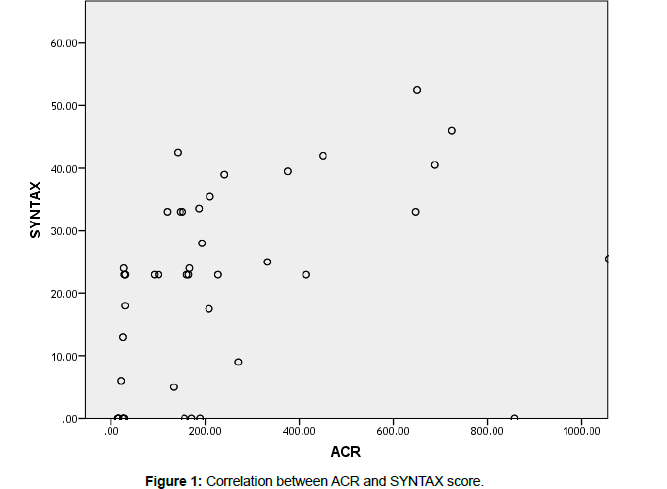 Multiple linear regression analysis was performed using the SYNTAX score as an outcome (dependent variable) and the ACR as a predictor after adjusting for age, sex, smoking, hypertension, hypercholesterolemia, BMI and HbA1c. Analysis showed that ACR was independently correlated with the SYNTAX score as shown in Table 6.

Table 6: Multiple linear regression analysis using the SYNTAX score as an outcome and the ACR as a predictor.

Type 2 diabetes mellitus (T2DM) and cardiovascular disease (CVD) are firmly connected, at least to some extent through simultaneous risk factors which often establish before the beginning of T2DM [18]. Type 2 diabetes is a growing health problem associated with high rates of cardiovascular morbidity and mortality [1,19]. Numerous patients with T2DM have sufficient hazard that it has been believed to be a risk equivalent of coronary artery disease (CAD) [2]. Moreover, it was found that the angiographically detected CAD is more severe in diabetic patients with microalbuminuria than in normoalbuminuric patients [20]. Microalbuminuria (MA) is a predictor, unrelated to conventional risk elements of cardiovascular diseases and entire reasons of death in DM or hypertension patient groups and in the general population [10]. It is gaining importance as a marker of atherogenic milieu and indicates the target organ damage and can be a valuable tool in screening and identification of patients with cardiovascular disease [11].

The results of the current study showed that albuminuria is firmly positively correlated to angiographically detected coronary artery disease in patients with type 2 diabetes mellitus and this association was statistically significant (P<0.001).

Previous study was proved that the ACR can predict CAD and correlate with its severity and there was significant correlation between microalbuminuria and CAD (p value<0.001) [27].

According to study of Zand Parsa et al. that conducted in patients with T2DM, MA and Gensini score were correlated positively (P<0.001) and therefore, MA can predicts the severity of CAD independently [14].

Guo et al. investigated the relation of the urinary albumin excretion rate (UAER) with the incidence, severity and pathological properties of CAD in subjects with T2DM, and explored the effectiveness of UAER as a predictor of the risk of CHD in subjects with T2DM. The dissimilarities in the incidence of CHD, the number of coronary arteries pathologically affected, the Gensini’s score and LVEF percentages between MA group and normo-albuminuria group showed statistical significance (P<0.05). Thus MA in subjects with T2DM is an independent risk factor for CAD and there is a significant positive correlation between MA and the severity of coronary atherosclerosis [28].

Albuminuria is firmly positively correlated to angiographically detected coronary artery disease in patients with type 2 diabetes mellitus and this association is independent of conventional risk factors. Therefore, albuminuria could be considered as a risk factor for predicting the severity of coronary artery stenosis in patients with type2 DM. Prospective studies are needed to determine with certainty the degree of risk of CAD associated with microalbuminuria.

The major limitations of our study are that it is an observational non randomized study; also, it is a single center study, with a small number of patient subgroups.

The research received no grant from any funding agency in the public, commercial or not-for-profit sectors.

The authors declare that there is no conflict of interest.

We express our sincere gratitude to the patients who participated in the study. We thank the technical staff at Mansoura Specialized Medical Hospital, Mansoura, Egypt for their excellent technical assistance.