For the first time, Al-doped ZnO patterned with graded photonic super-crystals with dual lattice and dual period and stacked on SiO2/ silver films, has been studied for plasmonic total light absorption. Broadband total light absorption occurs due to the gradient size distribution of dot disks in the photonic lattice. Localized surface plasmon polaritons (SPPs) are selectively confined in certain dot disks following the SPP formation condition, and total light absorption happens when the SPPs are coupled to the Fabry–Pérot resonance which is dependent on the spacer thickness.

Total light absorption (TLA) (or perfect absorption) and plasmonic TLA with zero reflection and zero transmission in thin film stacks and metal-insulator-metal (MIM) stacks have been studied for applications in photodetectors, solar energy harvesting, among other things [1-13]. In patterned MIM stacks, light can easily couple with surface plasmons to form surface plasmon polaritons (SPPs) following momentum conservation [1,4,5,8]. Plasmonic TLA has been observed in MIM stacks without strict conditions for the material selections, as is the case for thin film stacks [1-8]. In the infrared wavelength range, indium tin oxide (ITO), Ga-doped ZnO, and Al-doped ZnO (AZO) are good candidates for plasmonic materials due to their low optical loss and thermally, electrically, or optically tunable optical properties [14-22]. These materials have used to realize tunable plasmonic TLA [14-22].

TLA in broad wavelength is desired for applications such as solar energy harvesting. Multiplexed plasmon resonances in metal duallattices [4,5,23] have been used to achieve broadband plasmonic TLA. Dual lattice photonic crystals can be used to generate broadband light trapping enhancement for solar energy harvesting [24-26]. Simulations have shown that the light extraction efficiency is greatly enhanced if the cathode of an organic light emitting diode is patterned with gradient photonic super-crystals (GPSCs) [27].

In this paper, for the first time, we have simulated the light reflection from AZO/glass spacer/silver stacks that are patterned with a newly discovered GPSC with dual lattice and dual period. The gradient size distribution of dot disks in the GPSC lattices provide many choices for the formation of localized SPPs. Electric field intensity simulations illustrate the selection condition of localized SPPs and plasmonic TLA is explained in terms of SPPs coupling with Fabry–Pérot (F-P) resonance.

and the large period P3=12P1. These different periods (P1, P2, and P3) help couple light from free space to the GPSC pattern following the conservation of momentum. Two sets of lattices (dual lattices) can be identified by the yellow and blue squares although the size of the dots on the vertices of the square are graded. The size of the dots in one set of the lattices indicated by the yellow square become smaller as we move from the edge to the central region, while the dot size becomes bigger for the lattice indicated by the blue square.

The interference pattern I(r) was compared with threshold intensity. When I(r)< Ith the pattern becomes air, and AZO when I(r)> Ith. The dielectric function of the AZO was obtained through characterization of an AZO film by spectroscopic ellipsometry in our previous paper [29]. The thickness of the AZO and silver layers in the AZO/glass/silver stack, as shown in Figure 1b in cross-section, were both set to be 100 nm, and the glass thickness was adjusted to search for TLA. The absorption (A) is related to the transmission (T) and reflection (R) by A=1-T-R. The transmission is zero due to the silver mirror. Thus, in the simulation, the reflection from the AZO/ glass/silver stack was simulated and plotted. A=100% when T=R=0. The simulations of reflection spectra were performed with a finitedifference time-domain (FDTD) method, using MIT’s open source software package, MEEP [30]. The polarization of light source is in the [0,1] direction. Due to the large unit cell size, all simulations were performed on the Simpetus Electromagnetic Simulation Platform in Amazon Web Services (AWS). Parallel computations were used in 36-core virtual machines in AWS.

Figure 2: Simulated electric field intensity in the spacer layer (a) just above the silver layer and (b) just below AZO for AZO/spacer/silver stack patterned with GPSC. The solid circles duplicate the location of one set of lattices indicated by the blue square in Figure 1a. (c1, c2, c3) Cross-section views of the simulated E-field intensities cutting through the dashed blue, yellow, and white lines in (b). (c4) A schematic showing the zig-zag Fabry-Pérot path inside the glass spacer.

The following condition will be met for the formation of SPPs at the interface of the AZO and glass spacer:

Where λ is the wavelength, m an integer number, neff the effective refractive index as defined in Eq. (2), εAZO and εs the dielectric constants of AZO and spacer, respectively. For m=2 and diameters 840 and 940 nm, SPP wavelengths of 3037 and 3269, respectively, can be obtained from the Eq. (1), compared with the broadband plasmonic TLA in the range of 3055 and 3298 nm from the reflection spectra. From Figure 1a, the measured sizes for the largest and second largest dot disks are 914 and 822 nm, respectively. It is the dot area where strong electric field confinement appears, as in Figures 2a and 2b. Thus the gradient size of dot disks contributes to the broad TLA.

Using Eq. (1) and Eq. (2) with period P1 of 1400 nm and dot disk sizes between 960 and 1040 nm, SPP wavelengths were calculated between 3317 and 3517 nm. These disk sizes were used for the calculation of the F-P resonance wavelength above. However, the dot disks with sizes of 960 and 1040 nm in diameter in GPSC with a period P1 of 1400 nm are no longer in the central region of the unit super-cell. Thus the electric field simulation is performed in AZO/ spacer/silver stack patterned with GPSC with a period P1=1400 nm and a spacer thickness of 650 nm, as shown in Figure 4. The electric field intensities in the x-y plane at a location just above the silver, between the silver and AZO, and just below the AZO are shown in Figures 4a, 4b and 4c, respectively. From these figures, we can see that strong electric fields are confined in eight dot disks in row #2, ten dot disks in row #3, and four dot disks in row #4. Thus most of the electric field is confined in dot disks with sizes of 67.4% and 74.0% of period P1 for row #2 and #3, respectively. P1=1400 nm thus these sizes are 944 and 1036 nm, respectively, in good agreement with the predicted dot disk sizes of 960 and 1040 nm based on Eq. (1) and Eq. (2).

Figure 4: Simulated electric field intensity in the spacer layer (a) just above the silver layer, (b) between the silver and AZO, and (c) just below AZO for AZO/ spacer/silver stacks patterned with GPSC with spacer thickness of 650 nm. The solid circles duplicate the location of one set of lattices indicated by the blue square in Figure 1(a). The numbers in (c) are the percentage of dot disk size relative to the period P1 in different rows.

The coupling of SPPs with F-P resonance is further tested and the tunability of TLA is simulated. When a negative bias is applied onto AZO, a carrier accumulation occurs in a thin layer of AZO near the AZO/spacer interface. The carrier distribution can be solved by Poisson’s equation [21]. The change of carrier concentration results in a change of plasma frequency for AZO, as described by Eq. (3).

Figure 5 shows the results of simulations of plasmonic TLA in AZO/spacer/silver stacks when the plasma frequency of a 10 nm layer of AZO near the AZO-glass interface is changed from 1.45 eV to 1.65 eV and 2.20 eV while the rest of the AZO (90 nm) keeps the original plasma frequency of 1.45 eV. The stack is patterned with GPSC with a period P1=1000 nm and has a spacer thickness of 560 nm. For a plasma frequency of 1.65 eV, localized SPPs around the dot disk with smaller size than the one in Figure 2a can participate in coupling with the F-P resonance thus the TLA dip wavelength is shifted as seen in the Figure 5. At a plasma frequency at 2.20 eV, localized SPPs occur but are not coupled to the F-P resonance. This simulation indicates the tunability of plasmonic TLA through changes in carrier concentration. A real device can be designed with air holes in AZO for connection to an electrical source. 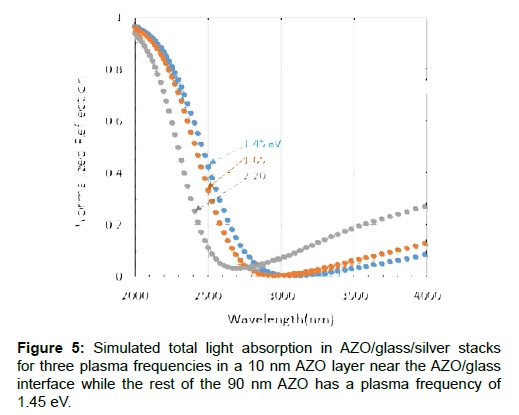 Figure 5: Simulated total light absorption in AZO/glass/silver stacks for three plasma frequencies in a 10 nm AZO layer near the AZO/glass interface while the rest of the 90 nm AZO has a plasma frequency of 1.45 eV.

Broadband plasmonic TLA has been observed in the simulations of reflection from AZO/spacer/silver stacks patterned with a GPSC with dual period and dual lattice. The TLA broadening is caused by the gradient size distribution of dot disks in the patterned AZO. TLA occurs when the localized SPPs are coupled with the F-P resonance in the spacer.