Caffeine (1,3,7-trimethylxanthine) is a well-known plant alkaloid that is present in several food and beverage products, such as coffee and tea are commonly consumed worldwide. After oral ingestion, caffeine concentration in the plasma peaks within 30-120 min. Furthermore, the hydrophobic property of caffeine allows it to pass through all biological membranes [1]. Caffeine is highlighted as a potent dietarycomponent associated with reduced risk of several chronic diseases, including type 2 diabetes [2,3]. Caffeine and other methylxanthines are used in clinical medicine as diuretics, analgesics, and muscle relaxants, and they can aid in the treatment of brain disorders such as headaches and Parkinson’s disease [4-6]. It has been reported that caffeine acts on various tissues; in particular it has a stimulating effect on the central nervous system [7,8] and cardiac muscle [9,10]. The mechanism by which caffeine improves performance is not clear, but several possibilities have been proposed, such as antagonizing adenosine receptors and increasing catecholamine release. It is known that a chronic low dose of caffeine (10mg/kg) in rats reduces ischemic brain damage and global ischemia. Caffeine and its metabolites could have different effects on the treatment of ischemia depending on the dose, the application, and the model of ischemia [11]. The treatment of rats with a sustained lower dose of caffeine (10 mg/kg) reduced ischemic brain damage and global ischemia. Caffeine’s actions have been shown to be mediated through blocking cell surface adenosine receptors, through inhibition of cAMP phosphodiesterase (PDE) activity, and by affecting the release of calcium from intracellular stores. Each of these three mechanisms has been implicated in modulating Blood Brain Barrier (BBB) functions, and the effects of caffeine on these mechanisms are clearly concentration and dosedependent. Caffeine’s protective effects against Alzheimer’s disease (AD) and Parkinson’s disease (PD) and potential mechanisms against BBB leakage respectively [12]. In liver Karas et al. [13] found that the oral administration of caffeine (150 mg/kg) increased MDA levels in the rat liver that had been treated with allyl alcohol to reduce the hepatotoxicity from the high dose of caffeine [14]. Interestingly, coffee has been suggested to have a potential favorable impact on liver diseases. In North America and Europe, studies have shown that coffee drinking reduces the risk of liver cirrhosis and Hepato Cellular Carcinoma (HCC). In addition, the protective effect of coffee drinking on the development of HCC has been reported in a case control study in japan [15]. Caffeine is metabolized by the liver to form dimethyl and monomethylxanthines, dimethyl and monomethyl uric acids, trimethyl and dimethylallantoin, and uracil derivatives [16,17]. The demethylation, C-8 oxidation, and uracil formation occur mostly in liver microsomes. The fundamental biochemical mechanism that underlies the actions of caffeine at doses achieved in normal human consumption must be activated at concentrations between the extremes (between barely effective doses and doses that produce toxic effects). This tends to rule out the direct release of intracellular calcium probably via an action on ryanodine receptors, the only known mechanism that is significantly affected by the relevant doses of caffeine binding to adenosine receptors and antagonism actions of agonists at these receptors [18,19]. Even though the primary action of caffeine may be to block adenosine receptors this leads to very important secondary effects on many classes of neurotransmitters, including noradrenaline, dopamine, serotonin, acetylcholine, glutamate, and GABA [20]. This in turn will influence a large number of different physiological functions. Caffeine is also known to affect a number of other cell signaling molecules and physiological functions. Caffeine inhibits acetylcholinesterase which inturn responsible for release of acetylcholine, but not butyryl cholinesterase [21]. Caffeine action is also not clear with carboxyl esterase metabolism. A human liver carboxylesterase (hCE-2) that catalyzes the hydrolysis of the benzoyl group of cocaine and the acetyl groups of 4-methylumbelliferyl acetate, heroin, and 6-monoacetylmorphine was purified from human liver [22]. Hydrolysis by carboxylesterases is increasingly used as a basis for drug design, particularly on pro-drugs containing functional groups such as carboxylic acid ester [23-25]. Carboxyl esterases are a group of enzymes widely distributed in nature (mammalian tissues) and isoforms have been described in human liver, brain and placenta. CEs comprises a group of serine–dependent esterases having the highest activity in hepatic microsomes [26,27]. They catalyze the hydrolysis of carboxylic acid esters to produce free acid anions and alcohols. Since a significant number of drugs are metabolized by carboxyl esterase, altering the activity of this enzyme class has important clinical implications. Caffeine can have both positive and negative health effects. However the effects of caffeine on total protein activity and specific activity of carboxyl esterase in young and old aged rat groups is not well understood There are several known action mechanisms to explain the effects of caffeine but not with CE for its activation on drug metabolism. Hence the main objective of this study was to determine effects of caffeine on total protein and carboxyl esterase activity for drug metabolism with Caffeine treated young and old aged male wistar rat’s brain and liver were used in this study.

Dose of the drug was calculated by converting adult human therapeutic dose (150 mg/day) to animal dose. The average dose of caffeine was amounted to 20 mg/kg of rat’s body weight per day. To study the effects of the drug, five young and old rats were treated with modulators (caffeine) orally for 5 days.

Collection of rat tissue and processing of tissue specimens

The samples of brain and liver were collected by sacrificing the rats. The model was first anesthetized using Xylazine and Ketamine in the ratio 1:4. The models were then prepared for dissection by securing them on wax boards and a cut was made near the dorsal line of skin to take out the liver and brain, which was removed by making a cut near the skull region. Both the liver and the brain were then subjected to wash with 0.9% Phosphate Buffer Saline (PBS) to remove the residues and blood, then weight of tissues were measured.

Preparation of tissue extraction from specimens for biochemical studies

Specimens (brain and liver) were homogenized using pestle and mortar followed by glass homogenization with tris buffer saline (TBS pH=7.4 containing 1% (v/v) triton-X 100) and protease inhibitors (10 μl 0.5 mM phenyl methyl sulphonyl fluoride in ethanol). Tissue to buffer ratio was 1:10 w/v (wet weight). Denaturation was prevented by maintaining specimens at low temperatures (5oC-10oC). Then homogenized sample was centrifuged at 10,000 rpm for 15 minutes at 4°C. The supernatants were collected for biochemical analysis and stored at 4°C until the enzyme activity was assessed.

Activity was measured based on the method by Gomori [30], which was later modified by Van Asperen [31]. Enzyme reaction was initiated by adding 900 μl of 5 mM α-naphthyl acetate in phosphate assay buffer (pH 7.0) to 100 μl tissue extract then incubated for 15 min at 27°C. Subsequently, the reaction was stopped by adding 500 μl DBLS reagent and enzyme activity was measured at 600nm.

The brain tissue supernatant sample of 40 μl was electrophoresed in a native polyacrylamide gel (10 %) at a constant voltage of 50 Volts. The run was stopped when the marker dye coomassive brilliant blue reached 1-2 mm above the lower edge of the plate. The gel was carefully transferred to the PBS solution. Then gel was incubated in substrate 5 mM α-naphthyl acetate solution for 10 minutes and stopping reagent DBLS was added and incubated till intense bands were seen [32]. 2D Electrophoresis was also performed for young brain and caffeine treated samples. Native PAGE for carboxylesterase was also performed for young and old brain with their caffeine treated samples.

The mean and standard deviation was calculated for carboxyl esterase by comparing with their controls and for respective age groups of wistar rats by using ‘t’ test calculator (Quick Calcs, GraphPad Software).

Specific activity of CE was calculated by determining total activity and total protein (from rat’s brain and liver tissue samples) and expressed as nm or μm/min/mg of protein. Initially both groups of rats were treated with caffeine intraperitoneally for 150 mg/kg body weight. It was observed that the caffeine dosage given was high enough that they died after 3 days treatment due to toxicity. This confirmed that higher caffeine content is toxic to brain and liver cells. Therefore the dosage was reduced to 20mg/kg body weight for 5 days chronic period. 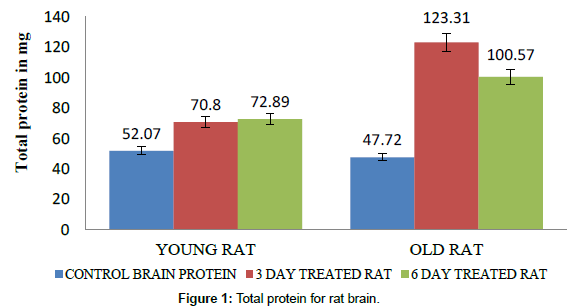 Table 1: Weight of Brain and Liver samples obtained after dissection. 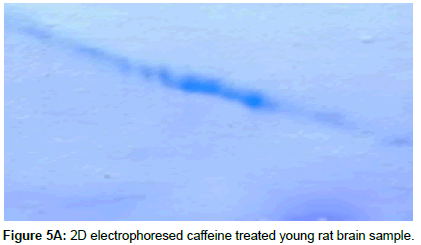 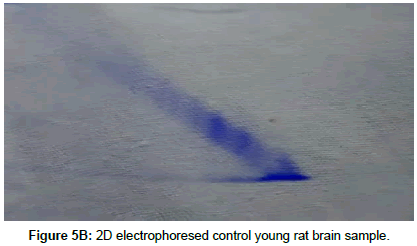 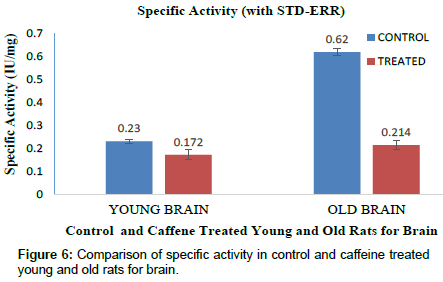 Figure 6: Comparison of specific activity in control and caffeine treated young and old rats for brain. 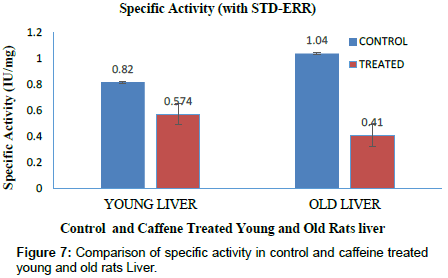 Enzyme kinetics deals with several factors affecting the rate of enzyme catalyzed reactions. The most important factors are: time, pH, temperature, and substrate.

pH: Effect of different buffers with different pH on carboxyl esterase’s was carried out in the range of pH-5-9 in which optimum pH 7.5 showed maximum CE activity. During the assay, the pH is brought back to optimum to detect the maximum activity (Figures 13 and 14).

Figure 13: Determination of optimum pH of esterase activity in A young and treated brain B old brain and treated old brain.

Figure 14: Determination of optimum pH of esterase activity in A young control and treated liver B caffeine treated old liver.

We express our sincere thanks to Prof. Nagaveni, Head of the Department, MLACW for giving us an opportunity to carryout project work in their institute. We would like to thank Dr. Channarayappa, Professor and Head, Department of Biotechnology, MSRIT for his guidance and encouragement. Authors would also like to acknowledge, Sameer, Pooja, Pooja C, who were also helped for this project.