Methods: This study prospectively enrolled 14 CAD patients who underwent antiplatelet therapy (DAPT in 13 patients) and had no history of symptomatic stroke. Brain MRI was performed at baseline and after 8-month follow-up.

Cerebral micro bleeds (CMBs) are small, round, boundary clear, hypo intensity lesions seen on T2*-weighted magnetic resonance imaging (MRI) that reflect histological changes around the small vessels, such as hemosiderin deposition in macrophages, hyaline degeneration, and amyloid deposition [2]. It is considered that CMBs are a new marker of cerebral small vessel disease, which provides evidence of blood leakage from pathologically fragile small vessels mainly affected by hypertensive arteriolopathy (i.e. deep CMBs) or cerebral amyloid angiopathy (i.e. lobar CMBs) [2-4]. A largescale prospective observational study has shown that the presence of CMBs is associated with a subsequent cerebral hemorrhage and ischemic stroke in 2,102 healthy elderly individuals [5]. Further, a systematic review and meta-analysis of prospective cohort studies has demonstrated that patients with CMBs have an increased risk for recurrent stroke, particularly for cerebral hemorrhage after ischemic stroke or transient ischemic attack [6]. Therefore, this suggests that the presence of CMBs is a potential risk factor for future cerebral hemorrhage. In this regard, there are concerns over the safety of antithrombotic therapy using antiplatelet and/or anticoagulant agents for the primary and secondary prevention of cerebrovascular disease in patients with CMBs. Among patients on oral anticoagulant therapy, it has been shown that the presence and number of CMBs, particularly lobar CMBs, are associated with a higher risk of future cerebral hemorrhage [7-9]. However, it remains controversial whether antiplatelet therapy using aspirin or thienopyridines would increase the risk for CMBs formation in patients with cerebrovascular disease or the risk for future cerebral hemorrhage in patients with CMBs [10-16].

This prospective observational study enrolled CAD patients for whom coronary angiography (CAG) and elective PCI were planned between March 2012 and October 2012 in Kurume University Hospital. Patients with a history of symptomatic stroke and those on warfarin or direct oral anticoagulants were not included. This study was performed in accordance with the Declaration of Helsinki and was approved by the Kurume University Ethics Committee. All patients gave their written informed consent. [UMIN Registration ID: UMIN000007367]

At the time of registration (baseline), medical history, smoking habits, and medications were evaluated. The baseline MRI was performed within 3-7 days after the index CAG/PCI (except 1 case with CAG alone). Eight patients had received DAPT at least one month before the index CAG/PCI, whereas DAPT was started within one week before the index PCI in five patients. Blood pressure (BP) was measured using a sphygmomanometer in a quiet, appropriate environment at room temperature after 5-min rest in the sitting position in a chair, according to the Japanese Society of Hypertension guidelines for the management of hypertension 2009 [17]. Measurements were performed twice with a 2-minute interval, and the two measurements were averaged. Eight months later, patients underwent the follow-up MRI.

Brain MRI and definition of CMBs

Brain MRI was performed using a 3.0-T MR system (Signa HDxt, GE Healthcare, Little Chalfont, England). MRI sequences were obtained in the axial plane with the following parameters: slice thickness = 5 mm, slice gap = 1 mm, TR/TE = 11 ms/5 ms for T1, TR/TE = 6000 ms/76 ms for diffusion weighted imaging, TR/TE = 9002 ms/140 ms for fluid-attenuated inversion recovery, and TR/ TE = 600 ms/20 ms and flip angle = 30° for T2*-weighted gradient echo. The imaging protocol consisted of T2*-weighted gradient echo, T1-weighted spin echo, T2-weighted fast spin echo, fluid-attenuated inversion recovery, and cerebral magnetic resonance angiography. The MRI examinations were evaluated visually for the presence of CMBs, cerebral infarction, white matter lesions, and arterial stenosis on the basis of the agreement of two cerebrovascular physicians specializing in brain MRI blinded to other clinical information. MRI imaging was performed under the same conditions, such as slice thickness and inter slice gap, throughout the present study. Special attention was given to match MRI slices of the same patient at baseline and at follow-up by using the intracranial anatomical components as the guide marks. CMBs were defined as small in diameter (2-10 mm), homogeneous, boundary clear, round foci of low signal intensities, which did not appear on more than two thinsliced images, on T2*-weighted MRI in accordance with the Micro bleed Anatomical Rating Scale (MARS) [18]. CMBs mimics were carefully excluded; particularly, linear and curvilinear hypoinstensity lesions in the subcortical area and the juxtacortical subarachnoid space were eliminated as the cortical vessels, according to the MARS [18]. A lacunar infarct was defined as a small, deep infarct of diameter less than 15 mm, with low signal intensity on T1-weighted images. White matter lesions were evaluated using a semi quantitative method proposed by Fazekas [19]: periventricular hyper intensity (PVH) was graded as 0=absent, 1=“caps” or pencil-thin lining, 2=smooth “halo”, or 3=irregular PVH extending into the deep white matter. Deep white matter hyper intensity (DWMH) was graded as 0= absent, 1=punctate foci, 2=beginning confluence of foci, and 3=large confluent areas.

CAG was evaluated at the time of the index PCI for the severity of coronary lesions at baseline. The number of coronary artery lesions with ≥75% stenosis according to the AHA classification and the SYNTAX score were assessed based on the agreement of two blinded PCI specialists [20].

Data are described as means ± SD. Statistical analysis was performed using commercially available software (JMP 11, SAS Institute Japan, Tokyo, Japan). Unpaired Student’s t-test and the χ2 test were used for comparisons of baseline characteristics and demographics and the MRI findings between the CMB-positive and CMB-negative groups. Mann-Whitney’s U test was used to compare the number of coronary lesions, SYNTAX score, SBP level, and SBP change between the two groups. A value of p<0.05 was considered significant.

This study enrolled 14 CAD patients with no history of symptomatic stroke (Table 1). Their mean age was 70.4 ± 5.8 years, and 85.7% were males. At baseline, systolic BP was 120.3 ± 17.1 mm Hg and diastolic BP was 68.3 ± 13.6 mm Hg. Among the 14 patients, two and seven had a history of effort angina and old myocardial infarction, respectively. Seven patients had undergone PCI or coronary artery bypass grafting. Symptomatic peripheral artery disease was found in one patient. On the index admission, 10 and one patients were diagnosed as having effort angina and silent myocardial ischemia, respectively, and three had acute coronary syndromes.

On baseline MRI, two (14.3%) of 14 patients had CMBs; one lobar CMB was detected in each subject (Table 2). Follow-up MRI showed new CMBs in two other patients (14.3%): one subject showed three lobar CMBs in the bilateral cerebral cortices and another had one deep CMB in the left putamen. The four patients who had CMBs on the follow-up MRI were classified as the CMB-positive group, and the remaining 10 patients were classified as the CMB-negative group.

At baseline, most patients had mild white matter lesions, and the PVH and DWMH grades did not differ between the CMB-positive and CMB-negative groups (Table 2). Lacunar infarction was shown in one and two patients of the CMB-positive and CMB-negative groups, respectively. Right vertebral artery stenosis was found in one patient of the CMB-negative group. Except for CMBs, the MRI findings did not change during the 8-month follow-up in each patient. Furthermore, the appearance of new CMBs was not associated with the presence of small artery disease and large artery disease at baseline.

Table 1 shows the baseline characteristics and demographics of the studied patients. Age, the prevalence of males, and baseline BP levels did not differ between the CMB-positive and CMB-negative groups. There were no differences in the CAD diagnosis at the index admission, past history of CAD, coronary risk factors, comorbidities, and DAPT use between the two groups. 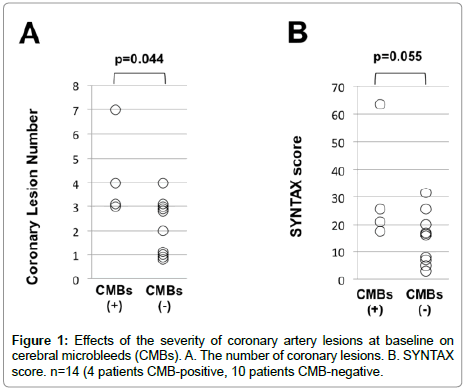 Figure 1: Effects of the severity of coronary artery lesions at baseline on cerebral microbleeds (CMBs). A. The number of coronary lesions. B. SYNTAX score. n=14 (4 patients CMB-positive, 10 patients CMB-negative. 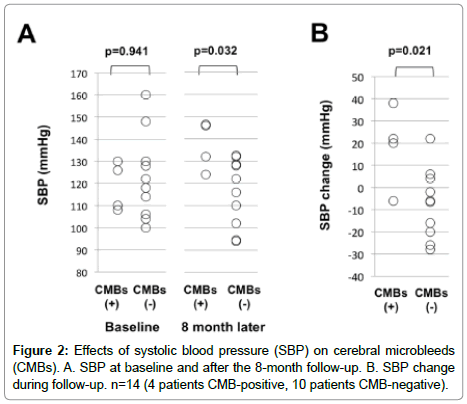 Figure 2: Effects of systolic blood pressure (SBP) on cerebral microbleeds (CMBs). A. SBP at baseline and after the 8-month follow-up. B. SBP change during follow-up. n=14 (4 patients CMB-positive, 10 patients CMB-negative).

The most important finding of this study was that the CMBpositive group had more severe coronary artery lesions and more poorly controlled hypertension compared to the CMB-negative group in patients with CAD on antiplatelet therapy (Figures 1 and 2). It has been shown that the severity of coronary artery lesions is associated with the comorbidity and severity of other vascular diseases in CAD patients [24]. Thus, it is plausible that patients with severe CAD may be susceptible to CMBs. After the 8-month follow-up, the CMBpositive group had higher BP than the CMB-negative group, which is in line with the previous studies showing that hypertension increased the risk of CMBs by 2- to 4-fold in the healthy general population [5,14].

Limitation of this study

The number of patients studied was small and the observation period was short. However, this prospective pilot study would provide the rationale and valuable information for conducting and designing a future large-scale prospective observational study to clarify the incidence of CMBs and the long-term outcomes, particularly cerebral hemorrhage, in CAD patients with CMBs. Such a future study would address whether the presence of CMBs can be a predictor of cerebral hemorrhage in CAD patients on antiplatelet therapy.

This study was supported partly by JSPS KAKENHI Grant (26460756, 15K4567). The authors would like to thank Katsue Shiramizu, Miyuki Nishikata, Miho Kogure, and Makiko Kiyohiro for their secretarial assistance.