A 7-year-old male child presented to the department of cardiology with the history of multiple swellings on elbow and knee. The lesions were initially noted when he was 2 years of age, but no medical care was sought until lesions increased in size, there was no history of the similar finding in family members, premature coronary artery disease, sudden death and myocardial infarction in a family. On examination, there was corneal arcus (Figure 1) and multiple, diffuse symmetric xanthomas on bilateral elbow and knees (Figure 2-4) Laboratory tests revealed the following lipid concentrations: Total Cholesterol (TC), 903 mg/dl and LDL-C, 339 mg/dl; the total Triglyceride (TG) and High- Density Lipoprotein Cholesterol (HDL-C) levels were within the normal ranges. When the family was screened father had serum cholesterol levels of 430 mg/dl, LDL-C was 300 mg/dl, TG 160 mg/dl and HDL-C 43 mg/ dl. The patient was clinically diagnosed to have homozygous familial hypercholesterolemia. Genetic testing was not available. Parents were counseled about diet and child was started on tab rosuvastatin 20 mg OD and advised to follow up. Father was also started on high dose statins and tab ezetimibe. The patient was unfortunately lost to follow up. 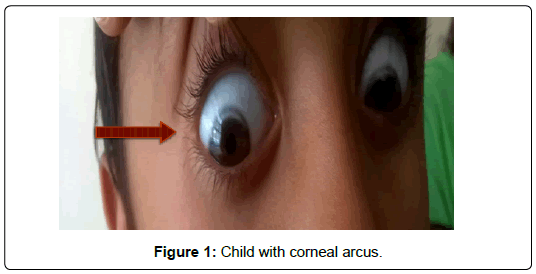 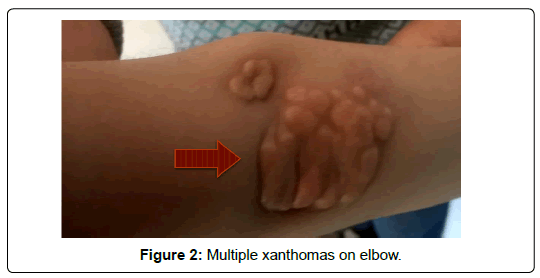 In 1939, Muller first described FH [1]. It is an autosomal dominant genetic disorder due to mutations in the Low-Density Lipoprotein Receptor (LDLR) gene that is located on chromosome 19 [2]. It is characterized by the significant elevation in levels of LDL-C and patients are at high risk for premature Coronary Heart Disease (CHD) [3]. There are two types of FH: the Heterozygous (He) form in which one has one normal allele and one mutated allele This is the most common form of FH with an incidence of 1 out of 500 [4].The homozygous (Ho) form is rare and has two mutated alleles, with an incidence of approximately one in a million although recent estimates suggest that the prevalence may be as high as 1 in 300,000 [5]. HeFH patients are usually diagnosed during adulthood and they often respond well to medical therapy. On the other hand, patients with HoFH are often diagnosed early in childhood, but have poor response to medical therapy. They can progress rapidly to premature CHD. In untreated FH, life expectancy is reduced with Myocardial Infarction (MI) and sudden death being the principal causes of mortality. Thus, timely and effective lipid-lowering treatment improves the life expectancy of patients with FH. In most countries, less than 20% of all estimated prevalent FH cases are diagnosed, with only less than 1% of patients are aware of their condition [6]. FH is associated with elevated levels of LDL-C. LDLR in liver clear LDL micelles containing cholesterol from plasma. Due to the defect in the LDLR the micelles are not cleared from the plasma leading to increase in the cholesterol levels resulting in atherosclerotic changes in arteries. Furthermore, cholesterol accumulation may occur in other parts of the body leading to the development of cutaneous xanthomas, which are yellow, elevated lesions, located in the elbows, hands, knees, Achilles tendon and on subcutaneous and periosteal tissue. These lesions usually develop within the first 4 years of life and often times are the first clue for diagnosis like in our patient [7]. Pathogenic variants in 1 of 3 genes, i.e. LDLR, APOB, or PCSK9, account for most cases. Thus, the cardinal manifestations of FH are significantly elevated LDL-C levels, early-onset ASCVD, and pathognomonic signs of cholesterol deposits under the skin (xanthomas) and in the cornea (corneal arcus). The biochemical mechanisms of corneal arcus remain controversial. The cornea has a temperature gradient which can effect lipid deposition. It also has a gradient regarding how dense the collagen fibers of the cornea are packed and thus affecting what size of particle can move towards the centre. Finally the cornea is avascular, with only the periphery being close to limbal capillary beds, which are the source of the lipid in arcus [8,9]. Various clinical criteria have been proposed to establish a diagnosis of FH but no international criteria are available. Three screening approaches have been proposed for FH: targeted (opportunistic), universal, and cascade. The National Lipid association guidelines recommend universal lipid screening and eliciting the family history of hypercholesterolemia and CHD in individuals with elevated levels [10]. High-intensity lipid-lowering therapy, including the maximum tolerable dose of a statin, is the cornerstone of management of patients with FH as well as patients with severe hypercholesterolemia (defined as an untreated fasting LDL-C level ≥190 mg/dL in adults (>20 years old) and ≥160 mg/ dL in children and adolescents) [10]. Treatment with high doses of atorvastatin and rosuvastatin reduced LDL-C levels by up to 20% in hoFH. When LDL-C targets cannot be reached by statin therapy alone, or in the case of statin intolerance, other drug treatments or combinations are recommended. Mipomersen and lomitapide are the two latest drugs recommended in the treatment of homozygous familial hypercholesterolemia. [11]. As such this population of patients poorly responds to drug therapy and LDL apheresis is required. With LDL apheresis levels can decrease by 40% to 60% per session, but the result is temporary. After a median of 3 to 4 weeks higher serum levels return in patients with homozygous FH, thus regular sessions are required to maintain lower LDL levels. Currently, LDL apheresis is recommended at weekly or biweekly intervals with concurrent administration of maximal doses of lipid-lowering agents. LDL apheresis delays but does not prevent the development of atherosclerosis. Furthermore, Starzl et al. [12] first described in 1983 that Orthotropic Liver Transplant (OLT) has been considered a modality of treatment for FH. OLT is specifically indicated for patients with homozygous FH that do not otherwise respond to maximal medical therapy and has been proposed as the only cure for homozygous FH [13].

Thus, to summarize there is a need for rapid and automated case identification, supplemented by clinical decision support systems to assist health care providers in managing patients and families with FH.