The aim of this paper to construct more closed form wave solutions of the nonlinear telegraph equation and the third extended fifth order nonlinear equation using the modified simple equation method. The remaining part of the paper is arranged as follows: In Section 2, method is described. In Section 3, the MSE method is applied to explore the solutions. In Section 4, graphical representation of the obtained solutions and In Section 5 conclusions are provided.

To describe the modified simple equation method we consider a nonlinear equation of two variables of x and t in the following form:

where P is polynomial of u(x, t) and its partial derivatives and u(x,t) is an unknown function.

The essential parts of this method are given in the following

Step 1: Introducing a compound variable ξ with the combination of real variables x and

where c is the wave speed.

Equation (1) converts into an ODE with the help of Equation (2) of the following form:

where Q is a polynomial in u(ξ) and its derivatives with respect to ξ.

Step 2: The solution of (3) can be expressed of the form:

Where ψ(ξ) is not known and to be calculated such that ψ’(ξ)≠ 0 and αi(i=0,1,2,3,…N) are arbitrary constants to be determined such that αN ≠ 0. Since ψ(ξ) is not known function or not a solution of any equation so it is not possible to guess in advance what kind of solution may be obtained. This is the exceptionality of this method. Therefore it might be possible to achieve some fresh solution by this method.

Step 3: The positive integer N can be evaluated by balancing the highest order of derivative term and nonlinear terms appearing in (3).

Step 4: Calculate the derivatives u’,u”,...and place in Equation (4) into (3) then we find the function ψ(ξ). These make a polynomial of (1/ψ(ξ)) and now equating the like terms of this polynomial to zero gives a system of algebraic and differential equation which on solving we get the values of αi ’s and ψ(ξ)'

Exploration of the Solutions

In this section, the modified simple equation method (MSE) has been put to use to examine the closed form solutions leading to solitary wave solutions to the third extended fifth order nonlinear equation and the nonlinear telegraph equation.

Now we will apply the method which is described in section 2 to explore the closed form wave solution of nonlinear telegraph equation [36]:

Equation (5) is referred to as (1+1) dimensional hyperbolic telegraph equation with constant coefficients which models a mixture between diffusion and wave propagation by introducing a term that accounts for effects of finite velocity to standard heat or mass transport equation.

The wave transformation u(x,t)=u(ξ),ξ=x-ωt reduces the PDE (5) to ODE in the following form

where ω is a constant (wave speed) to be determined latter.

Hence the solution form of (6) turns into

Where α0 and α1 are constant such that αi ≠ 0 and the unknown function ψ(ξ) to be calculated. Putting the value of (7) with its derivatives in equation (6) and equating the coefficient of ψ0, ψ-1, ψ-2, ψ-3 to zero we attain the following successive algebraic and differential equation,

where c1 and c1 are arbitrary constants.

As c1 and c2 are arbitrary constant one may randomly can choose their values. So if we let c1 = 1 and c2 = 1/λ then we get the following closed form wave solution

Again setting c1 = -1 and c2 = 1/λ in Equation (16), we obtain the closed form wave solution of nonlinear telegraph equation of the form:

Using hyperbolic functions identities, Equation (17) and Equation (18) can be rewritten as,

then replace with these values of α0, α1, ω and λ in (17) provides the closed form wave solution in u(x,t) variables :

Since c1 and c2 are arbitrary constant we may pick their values. If we replace c1 = 1 and c2 = 1/λ we get the closed form solution of nonlinear telegraph equation in the following form:

with hyperbolic functions characteristics, Equation (22) and Equation (23) can be modified as,

Integrating (27) twice with respect to ξ and assuming the constant of integration to zero, we obtain

Therefore, the solution of Equation (28) becomes

Where ψ(ξ) is an unknown function to evaluated latter and α0 and α1 are constant such that αi ≠ 0. Substituting Equation 29 with its derivatives into (29) and then equating the coefficient of ψ0, ψ-1, ψ-2, ψ-3 to zero we get a system of successive algebraic and differential equation.

Since c1 and c3 are constant so any one can put c1 = c1+ c3. The general closed form wave solution of third extended fifth order nonlinear equation is as follows:

Since c1 and c3 are integration constants, one may arbitrarily choose c1 = c1+c3.Thus, the general closed form traveling wave solution of the third extended fifth order non-linear equation is obtained as follows:

Graphical Representation of the Obtained Solutions 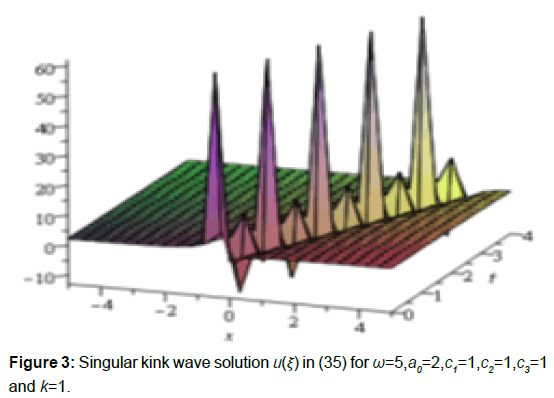 In this article, the modified simple equation method has been successfully applied to explore the closed form wave solution of two nonlinear equation named the nonlinear telegraph equation and the third extended fifth order nonlinear equation. The solutions are verified to test the correctness by putting the solutions back into the original equation and found correct. The used method has many advantages: it is straightforward and calculation procedure is very concise. Therefore this efficient method could be more effectively used to solve various NLEEs which regularly arise in science, engineering and other technical arenas.

The authors wish to take this chance to express their gratitude to the referees for their valuable observations and suggestions which improved the quality of this article.