Phenolics are considered as vital compounds in human health because of their major role in the defence from oxidative damage. Considering the significance of phenolic compounds, an investigation was undertaken to analyze combining ability for flavonoids, flavonols and total phenols in cabbage hybrids developed by crossing parents in different combinations. Variance among parents, crosses and parents vs. crosses were noted to be significant. The proportion of σ2gca/ σ2sca was less than unity and therefore highlighting the role of non-fixable type gene action for all compounds. The parents SEL-7, C-5 and DARL-852 were good general combiners for various traits. The crosses SEL-1 x C-3, SEL-7 x C-5, SEL-7 x C-7, C-3 x C-7, C-5 x C-1 and C-1 x D-851 exhibited significant specific combining ability (SCA) in desirable positive direction that can be exploited by breeding programme. The information could be used for developing heterotic cabbage hybrids for phenolic compounds with enhanced antioxidant activity

Cruciferae vegetables are highly nutritious and contain different antioxidant compounds [1]. Cabbage (Brassica oleracea var. capitata L.), is a foremost crucifer vegetable grown worldwide for its heads, and consumed fresh in salads, in various culinary dishes and also preserved by pickling, dehydration or freezing [2]. It is a rich source of dietary antioxidant phyto-chemicals and mineral nutrients [3,4]. Antioxidants are phyto-chemical compounds contain vitamins, polyphenols, flavonoids, flavanols, enzymes and minerals that have ability to protect our body from various active oxygen species (AOS) [5]. Most of the metabolic deformities in human body develop by the deleterious AOS which are inevitably generated in human body during normal metabolism as well as when exposed to stress [6]. Antioxidants are phyto-chemical compounds that scavenge or deferred the oxidation of active oxygen species by suppressing the oxidizing reactions [7]. Among phyto-chemicals that possessing antioxidant capacity, phenolics are one of the most important functional group in plants as secondary metabolites, and developed in plant via shikimic acid pathway and classified in two group flavonoids and non-flavonoids [8]. Phenolic compounds and flavonoids abilities to scavenge AOS is related with number and position of hydroxyl groups in molecules, higher number of hydroxyl group showed higher antioxidant activity [9]. These compounds showed anti-artherogenic, anti-microbial, antioxidant, anti-allergenic, anti-inflammatory, antithrombotic and cardio protective properties [10-14]. They can play dominant role in adsorbing and neutralizing active oxygen species (AOS). In living organism excessive AOS generation along with deficient antioxidant activity leading damage to central nervous system and cell components, accelerate ageing, induces disorder and diseases [15-18]. Antioxidant system contains protective agents that reduces oxidative damage from active oxygen species and reduces development of diseases and lipid peroxidation [19-22].

Nine cabbage lines namely, SEL-1, SEL-7, C-5, C-3, C-1, C-7, DARL-851, DARL-852 and DARL-SEL respectively, consist of the basic experimental materials for the investigation. These genotypes were selected based on their prior information.

The genotypes were crossed in all possible combinations without reciprocals during 2013-2014 to develop F1S. Manual emasculation and pollination was used to make the crosses [25]. Suitable flower, 1-2 days before opening were emasculated with the use of scissors and forceps. After the emasculation, the flowers buds were covered and pollens from male parent were transferred on the next day morning to complete pollination. After that, the flowers were protected to avoid any chance contamination by foreign pollen by covering pollinated flower buds with white semi-transparent paper bags. After 30-35 days of pollinations, seeds from pollinated plants were harvested, packed in moisture proof envelops and kept in cold storage.

Hybrid seeds were sown in nursery beds to raise seedlings, before sowing the seeds were treated with Diathane M-45 and bavistin as a prophylactic measure. Thirty five day old seedlings of 36 cross combinations along with nine parents and one check with four to five true leaf stages were transplanted in experimental field of Defence Institute of Bio-Energy Research, Pithoragarh, Uttrakhand. Pithoragarh falls in mid Himalaya region and located at an altitude of 1514 m and at 29.58° N latitude and 80.22°E longitude. Minimum and maximum temperature during crop season (August-January) was 20.39-1.0°C and 25.87-15.07°C, respectively with relative humidity (RH) of 79.44 - 60.20 %. Total rainfall during the crop season was 479.60 mm. Soil of the experimental farm was slightly acidic (6.45) with E.C 0.043. Twenty plants were accommodated in each plot of size 2.0 m x 3.0 m with spacing of 60 cm x 50 cm. Randomized complete block design (RCBD) with three replications was used for evaluation of experimental materials in the field. All the intercultural practices were carried out in accordance with the recommended agronomic practices and plant protection measures uniformly to all the parents and hybrids during the experiment.

Fresh samples were collected from each genotype when cabbage heads were at marketable stage and analysed for the analysis of flavonoids, flavanols and total phenols. The head was chopped into pieces and lyophilized at -30°C and then grounded with the help of mortal and pestle in powder form. The powder was stored at -20°C until extraction of antioxidant phyto-chemicals.

Aluminium chloride based colorimetric method described by Chang et al was used to determine flavonoids [26]. Sample was extracted with 80% aqueous ethanol under 200 rpm shaking for 24 hours. A volume of 1.0 mg/ml of sample extract was mixed with 100 μl of 10% aluminium chloride, 100 μl of 1.0 M potassium acetate, and 2.8 ml of double distilled water (DDW). The reaction mixture was shaken gently and kept for 30 min followed by determination of absorbance at 415 nm using UV-Vis spectrometer. The calibration curve was prepared using quercetin as a standard. Flavonoids contents determined using quercetin standard curve were expressed as mg quercetin equivalent/g (mg QE/g) of sample dry weight.

The Flavonols was analysed by the method of Kumaran and Karunakaran with certain modification [27]. Dried powder was extracted with aqueous ethanol with agitation for 24-30 h. A volume of 2.0 ml of sample extract (mg/ml) was added to 3.0 ml (15g/L) aluminium trichloride and 5 ml (50 g/L) sodium acetate. The reaction sample was shaken gently, and after 2 h incubation at room temperature, the absorbance at 440 nm was taken using UVVis spectrometer. Rutin standard curve was prepared to determine flavonols in mg rutin equivalent/g (mg RE/g) of sample dry weight.

Folin-Ciocalteau reagent approach of Singleton et al was used to analyse total phenol content [28]. The powder sample were mixed with ethanol (80%) at room temperature, spin at 10,000 rpm for 10 min and the supernatants was taken out. The residue was re-extracted and supernatant was evaporated to dryness followed by making up of volume to 5 ml with double distilled water (DDW). 100 μl of evaporated extract was pipette out and this volume was made up to 3 ml with DDW. In this extract 500 μl of Folin- Ciocalteau reagent was added. After 3 min, 2 ml of freshly prepared 20% sodium carbonate (Na2Co3) was added and shaken gently or vortex and incubated for 30 minutes at room temperature. Absorbance was then noted at 650 nm using the double beam PC based UV-Vis spectrometer. Total phenols were expressed as milligrams catcheol equivalent per gram (mg CE/g) of sample dry weight.

The statistical tools SPSS 10.0 and Windostat version 9.2 were used to analyse the data. The analysis of variance was performed and estimates of variance were calculated. The variances of GCA (σ2g) of parents and SCA (σ2s) effects of cross combination were determined using expected mean squares. Additive (σ2A) and non-additive (σ2D) genetic variances were determined following Matzinger and Kempthorne [29].

Table 1: Analysis of variance for flavonoids, flavonols and total phenols in cabbage.

Table 2: Variance of component for flavonoids, flavonols and total phenols in cabbage.

Table 3: GCA effects and mean of parents for flavonoids, flavonols and total phenols in cabbage. 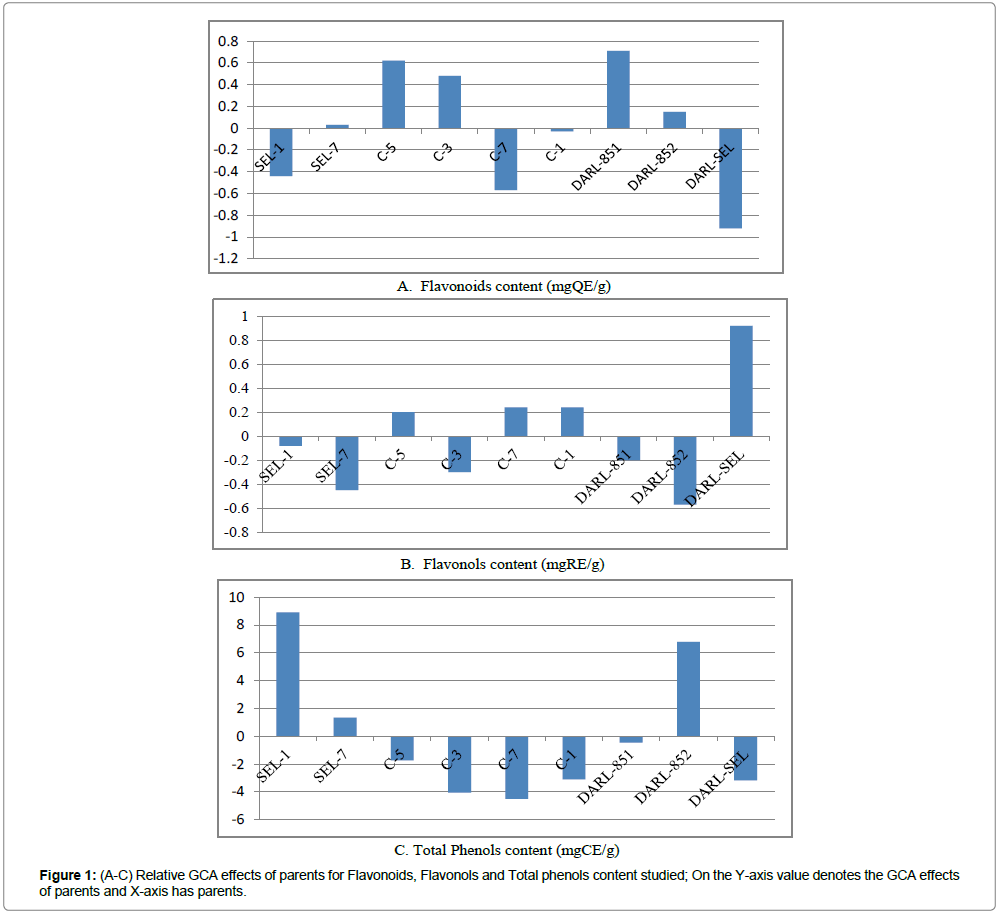 Table 4: SCA effects and mean of promising crosses for flavonoids, flavonols and total phenols in cabbage.

The significant variance among parents crosses and parent plus crosses for flavonoids, flavonols and total phenols indicate diverse nature of experimental materials and further validate that the materials chosen for the investigation are adequate for genetical studied to draw valid inferences. The significant variances for parents and parents vs. hybrids showed extensive role of both fixable and non-fixable variances for all the three antioxidant compounds. Less than one ratio of σ2gca/ σ2sca in all the cases specified greater role of non-fixable gene action for flavonoids, flavonols and for total phenols. Greater value of σ2D than the σ2A further revealed more significance of non-fixable gene action in determination of flavonoids, flavonols and for total phenols. In cabbage, Singh et al have also reported dominant gene action for antioxidant enzymes (SOD, POX and CAT) [24].

The parents that have high GCA producing high SCA hybrids are an indication of additive x additive gene interaction. In the present investigation however, superior cross combinations were obtained not only from crossing parents with good GCA but also from parents with good and poor, and poor and poor GCA combinations. This suggests the significance of non-fixable type of gene action in the inheritance of the trait. The information on SCA effects is important for exploitation of heterosis. The promising cross combinations identified namely (SEL-1 x C-5; SEL-7 x C-5; SEL-7 x C-7 and C-3 x C-7) possessing significant SCA effects for flavonols and total phenols, (C-5 x C-1 and C-5 x C-7) for flavonoids and total phenols and (C-1 x DARL-851) for flavonoids and flavonols were derived from crossing parents with good GCAs, good and poor GCAs, and poor GCAs and can be effectively utilised in heterosis breeding programme for development of hybrids with improved flavonoids, flavonols and total phenols. However, majority of the cross combinations have at least one good general combiner as a parent.

Based on the observation, it is clear that parents that have higher as well as lower GCA effects could be exploited in hybridization programme for development of hybrids and synthetic cultivars in cabbage with enhanced antioxidant compounds. Singh et al. opined that for enhanced antioxidant activity in cabbage, parents with high per se performance, at least one parent with good GCA of a cross combination and, crosses with favourable SCA estimates would be advantageous to increase the frequency of desirable alleles [24].

Significant variance among the parents, hybrids and parents vs. hybrids for flavonoids, flavonols and total phenols signify the effect of both fixable and non-fixable gene action. However, ratio of less than unity of σ2gca/ σ2sca pointed out the predominant role of non-fixable gene action. Higher estimate of σ2D than σ2A further signifies the greater role of non-fixable gene action for antioxidant compounds. Parents SEL-7, C-5 and DARL-852 expressed higher GCA for various antioxidant compounds that could be exploited through hybridization programme. The cross combinations namely (SEL-1 x C-5), (SEL-7 x C-5), (SEL-7 x C-7), (C-3 x C-7), (C-5 x C-1), (C-5 x C-7) and (C-1 x DARL-851) manifested significant SCA effects for various antioxidant compounds and provide opportunity to improve these compounds via heterosis breeding programme. The results of the study can be helpful in cabbage breeding for development of hybrids and synthetic cultivars with higher flavonols, flaovonoid and total phenols content for the benefit human health.

The authors sincerely obliged to the Director, DIBER, Haldwani for providing all facilities for Research work. DRDO, India is duly acknowledged for financial support.