Background: To Study the coronary artery profile in young Kuwaiti patients who are using anabolic steroids for bodybuilding.

Subjects and methods: We have done a retrospective analysis of all young Kuwaiti male patients ≤ 30 years who underwent coronary angiogram in Sabah Al Ahmed Cardiac Center, Al Amiri Hospital during the period of 2014 to 2017. Patients were categorized into two groups, group A1 consisted of patents who were anabolic steroid users, while group A2 consisted of patients who were not anabolic steroid users. Chi-square test of independence was used to compare A1 and A2.

Conclusion: Incidence of acute coronary syndrome associated with anabolic steroid use was 83.3%, it was contributed to by LAD and RCA lesions along with slow flow phenomenon.

McNutt et al. first documented the association of myocardial infarction and anabolic steroids [1]. Anabolic steroids are synthetic derivatives of testosterone used by body builders and is well known for its serious side effects. Coronary artery disease is one of the major complication of AAS use. The commonest presenting complaint of such cases is chest pain [2-4]. Treatment options include angioplasty and thrombolytic therapy depending on the underlying etiology of the infarction [4]. Coronary angiogram mostly reveals a normal coronary artery profile lacking vascular lesions [5,6].

We did a retrospective data analysis of all male Kuwaiti patients ≤ 30 years of age who underwent coronary angiogram for various reasons between the period of 2014 to 2017. The data was collected from Sabah Al Ahmed Cardiac Center, Al Amiri Hospital, Kuwait during the six-week period of January 8th to February 15th 2018. The data we collected included demographics, medical history, baseline characteristics, treatment, procedures and discharge instructions. Young was defined as ≤ 30 years of age. The patients were categorized into two groups, A1 consisted of anabolic steroid users and A2 consisted of non-users.

Categorical variables on Baseline and outcome data presented as percentages and frequency. Interval variables are presented in standard deviation (SD) or median and range. Chi-square test of independence was utilized for establishing the association between G1 and G2 and for A1 and A2. P Value ≤ 0.05 is considered statistically significant. SPSS V.21.0 statistical software was used to analyze the data.

We included a total of 19 young Kuwaiti males < 30 years of age who underwent coronary angiogram during the period of 2014 to 2017; they were then stratified based on anabolic steroid use. Group A1 had the anabolic steroid users, which consisted of 6 patients, whereas group A2 had the non-anabolic steroid users, which consisted of 13 patients (Figure 1). Demographics of the patients are as follows; mean age was 24.37 ± 3.15; group A1 had a mean of 24.33 ± 3.5 while group A2 had a mean of 24.38 ± 3.12. The mean BMI of the patients was 29.81 ± 5.2, group A1 had a mean BMI of 32.8 ± 5.1 , and while group A2 had a mean BMI of 28.6 ± 5 . The risk factor profile of this group of patients included, hyperlipidemia in 15.8%, family history of coronary artery disease (CAD) in 26.3%, hypertension in 21.1%, diabetes mellitus 10.5%, current/ex-smoking in 94.7%, history of heart failure in 5.3% and 10.5% had history of valvular heart disease. Group A1 had a significant number of current/ex-smokers at 100%, whereas hyperlipidemia, family history of CAD, hypertension, history of heart failure and history of valvular heart disease were only present in 16.7% in A1, no diabetics were present in this group. Group A2 patients had hyperlipidemia and diabetes in 15.4%, family history of CAD in 30.8%, hypertension in 23.1%, history of valvular heart disease and chronic renal failure in 7.7%, and smoking also was the common risk factor present in 92.3%, whereas no patient had history of heart failure (Figure 2). The admission diagnosis had acute coronary syndrome (ACS), myocarditis and others which included heart failure (HF) and dilated cardiomyopathy (DCM). Majority of patients (68.4%) were diagnosed to have ACS, while 15.8% were diagnosed with myocarditis. Group A1 had 83.3% diagnosed with ACS, 16.7% were placed in the other category and no myocarditis cases. Group A2 had 61.5% ACS, 23.1% myocarditis and 15.4% in the other category (Table 1). 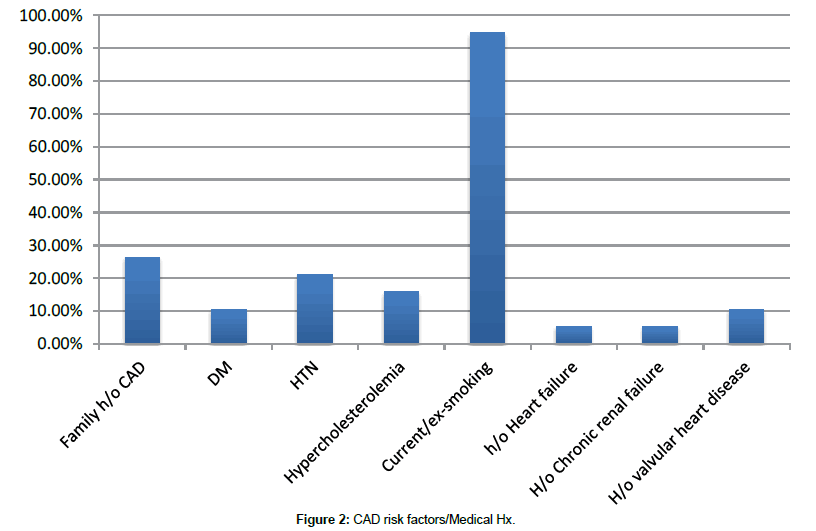 Table 1: Demographic and clinical characteristics of the cohort stratified by anabolic steroid use among young Kuwaiti male patients.

The medications used in the first 24 h where analyzed, this showed that the most commonly used drug was aspirin 89.5%, followed by beta-blockers 63.2%, glyceryl trinitrate (GTN) 57.9%, statins and clopidogrel were used 52.6%, angiotensin converting enzyme inhibitors (ACE-I)/angiotensin receptor blockers (ARBs) 47.4%, ticalgrelor and glycoprotein 2B/3A inhibitors (GP2B/3A inhibitors) were used in 15.8%, insulin was used it 10.5% and aldosterone inhibitors (spironolactone) were used in 5.3%. Use of ACE/ARB’s were seen more with group A1 with a statistical significance. Almost all patients in group A1 received beta-blockers while in group A2 only half of the patients received it in the first 24 h. Medications during discharge showed aspirin to 73.7%, ACE-I/ARBs to 68.4%, statins and beta-blockers to 63.2%, ticalgrelor to 31.6%, clopidogrel to 21.1% (Table 2).

Table 2: Medication utilization of the cohort stratified by anabolic steroid use among young Kuwaiti male patients. 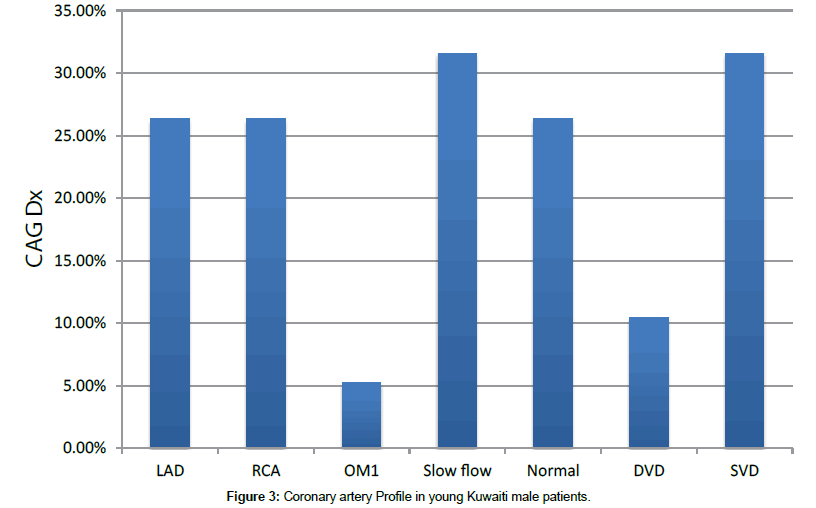 In our single center study we analyzed the coronary artery profile of 19 young Kuwaiti ≤ 30 years of age male patients. It was evident in our study that AAS use was associated with higher incidence of ACS which accounts up to 83.3%. Among AAS users ACS was mainly contributed by slow phenomenon and lesions in LAD and RCA. We found smoking as the major risk factor which accounts almost 94.3%. In a study of 140 male weight lifters within the age range of 34-54 years old, 86 of which were on AAS and 54 were not, their results showed that, over time AAS use causes early coronary artery atheroma [7].

Another study to assess coronary artery disease in young patients who are ≤ 35 years of age, they enrolled the first 200 patients who were scheduled for CAG, they found that SVD was present in 32.5%, DVD in 19% and TVD in 15%, with smoking being the most significant risk factor with a prevalence of 71% among the enrolled patients [8]. In our study we found to have 33.3% of SVD and 16.7% DVD among AAS users.

Presences of DVD with ventricular arrhythmias were noticed in young males with AAS use [9]. Association between AAS use and premature CAD was analyzed in a study of 51 males with the age 23-43 years, who were on AAS for a minimum of 2 years. The study concluded that 24% of the AAS users showed coronary atherosclerosis; whereas the non-users showed no sign of CAD on CAG [10]. In our study we found 16.7% had normal coronary angiogram among AAS users.

The cardiovascular effects related to steroid use can be due to lipid profile alteration which leads to the high density lipoproteins (HDL) levels decrease with an increase in total cholesterol and low density lipoproteins (LDL) which leads to an atherogenic environment. Thrombosis secondary to anabolic steroid use is caused by alterations to the coagulation cascade and the various coagulation factors can contribute a prothrombotic environment. ACS related to AAS use is mainly due to vasospasm. The AAS use can cause direct myocardial cell injury leading to necrosis [11] Post mortem examination of urine showed metabolites of AAS in young body builders, whereas his coronaries where normal with no sign of atheroma on autopsy [6,11]. In 12 year follow-up study the mortality of AAS users when compared to a control group was 12.9% whereas the control group had only 3.1% [12]. In our study we found zero mortality in 3 year follow-up.

AAS use can lead to various complications of anabolic steroid use affects various body systems, ranging from acute coronary syndrome, infertility and gynacomastia, hypogonadism, baldness, tendon rupture also increased aggression. It has a negative impact on mental health and can cause mood disorders [12].

Limitations we encountered during this study included the lack of time as we only had 6 weeks to complete it. The narrow age criteria we implemented significantly reduced the number of patients. We were not able to retrieve some files; we also excluded females from the study.

Anabolic steroid users are more prone to have acute coronary syndrome and smoking was seen as the commonest risk factor among young Kuwaiti males. Single vessel disease involving LAD or RCA was seen common with this group of patients on AAS. We need more studies with a large cohort for a better conclusion on the coronary profile of young males using AAS.

It is a single center observational study. We did retrospective analysis only at department of cardiology, Sabah Al Ahmad Cardiac Center, Al Amiri hospital Kuwait.

There are no ethics restrictions preventing the sharing of the raw data.