Background and rationale: Previous data demonstrated that regional fat distribution plays an important role in the development of an unfavorable metabolic and cardiovascular risk profile. Epicardial adipose mass reflects intra-abdominal visceral fat, is related to left
ventricular mass and other features of the metabolic syndrome, such as concentrations of LDL cholesterol, fasting insulin and adiponectin, and arterial blood pressure.

Aim of the study: To examine the relation of peri-coronary epicardial adipose tissue (EAT) to coronary artery calcification and atherosclerosis in Egyptian post-menopausal women.

Patients and methods: The study enrolled 100 post-menopausal women with suspected coronary artery disease. The amount of EAT surrounding the left main and three main coronary arteries was quantified in axial cuts with the most distinct layer of EAT.
The amount of calcium in the coronary arteries was quantified with multidetector-row computed tomography (MDCT) using dedicated software for calcium scoring that is based on the Agatston score. Coronary artery disease severity was assessed in terms of number
of vessels affected and severity of coronary stenosis by multiplanner reformation (MPR) technique.

Over the past couple of decades, there has been accumulating evidence as to the role of visceral adiposity both as a marker, as well as an etiologic factor in the pathophysiology of metabolic syndrome, and other cardiovascular risk factors. Epicardial Adipose Tissue (EAT) shares common embryological origin with visceral adipose tissue. Both have been proven to act as reservoirs for several inflammatory cytokines, directly involved in the etiology of atherosclerotic vascular disease.

Previous studies demonstrated that EAT measured either on the right ventricle or surrounding the whole heart is significantly related to waist circumference, diastolic blood pressure, left ventricular mass, high level of insulin, and the severity of CAD assessed by coronary angiography [1,2].

Segments of coronary arteries lacking EAT or separated from it by a bridge of myocardial tissue appear to be protected against the development of atherosclerosis. This may be due to the absence of adipose tissue within the myocardium as compared to the epicardium, which through harboring epicardial adipose tissue (EAT) may be involved in the pathophysiology of atherosclerosis within the epicardial coronary arteries [3].

One hundred post-menopausal females (a homogenous group more prone to develop coronary artery disease) referred for multidetector computed tomography (MDCT) scan of the coronary arteries were prospectively enrolled in the current study. All patients signed an informed consent prior to enrollment.

Women at the peri-menopausal state, missing date of onset of menopause, subjects with history positive for use of oral contraception and/or post-menopausal hormonal replacement therapy, subjects who had documented history of previous cardiovascular events (Acute coronary syndrome including ST elevation myocardial infarction, Non-ST elevation myocardial infarction, percutaneous coronary intervention, and coronary artery bypass grafting), subjects with contraindications to IV contrast injection (hypersensitivity, chronic renal impairment), subjects with familial hypercholesterolemia, subjects with CAC score more than 1500 Hounsfield Units (HU) due to the difficulty in assessing the coronary arteries with heavy calcification), and subjects with history of thyroid dysfunction due to influence on lipoprotein and fat metabolism.

All scans were performed on a 64-slice CT scanner (Toshiba Aquilion, Toshiba Medical Systems, Nasu, Japan). Breath holding was utilized to minimize motion artifact. IV-β-blockers were administered when the resting heart rate of the patient exceeded 70 beats per minute.

Before the injection of iodinated contrast for the performance of coronary CT angiography (CCTA), a test bolus injection was given to determine the timing of acquisition, the CCTA was performed by retrospective ECG gating according to the following protocol: tube voltage 100-140 kilo-Volts depending on patient’s weight; tube current 560 milli-Amperes with dose modulation; gantry rotation time 0.33 seconds; pitch 0.2-0.44 adapted to heart rate; collimation 0.6 millimeters, leading to an isotropic voxel resolution of approximately 0.2 mm3. A volume of contrast agent (Omnipaque) adjusted for body weight (1.25 cc/kg) was injected continuously at a rate of 6 cc/s. Axial images were reconstructed with 0.75 mm slice thickness and reconstruction increments of 0.4 mm.

The amount of calcium in the coronary arteries was assessed with multidetector-row computed tomography (MDCT) scanner. During a single breath hold, images of the heart was acquired using prospective ECG triggering at 50-80% of the R-R interval, depending on the heart rate. Quantification of coronary calcium was performed on a separate workstation with software for calcium scoring. Coronary artery calcification (CAC) was quantified based on the Agatston score, which is a measure of the area of a calcified lesion multiplied by a factor based on the maximum pixel density.

The computer system provided the Agatston score for each of the following locations: left main coronary artery, left anterior descending artery, left circumflex artery, and right coronary artery. (A total score representing the cumulative calcium burden in all the above locations was then calculated for each patient as the final Agatston score, which was reported in the study results. All the previously mentioned regions with a density>130 HU were manually identified as potential calcifications [4,5]. Coronary artery calcium score of 400 Hounsfield units or higher was considered a cutoff point to define “significant” coronary calcification, based on previously reported data [6]. CAC measurements were performed by an observer other than those who performed EAT measurements to minimize bias.

• Every artery was classified to proximal, mid, and distal segments.

• No Stenosis was defined as no lesions at different segment of the coronary arteries.

• Non-Significant stenosis was defined as lesions of severity less than 50% at different segments of the coronary arteries.

• Significant stenosis was defined as lesions of severity equal to or more than 50% at different segments of coronary arteries.

The amount of EAT surrounding the left main and the three main coronary arteries was quantified on the MDCT scans, using previously reported techniques [6]. This was performed by two different observers; both were blinded to the study rationale. Scans were loaded into the work station to an adjusted window setting to make the pericardium and EAT visible. Next, the sections with axial cuts perpendicular to the surface of the heart were identified and utilized for EAT measurements (to avoid an overestimation of EAT diameter due to obliquity). This was done separately for the three main coronary arteries; right coronary artery (RCA), left anterior descending artery (LAD), and left circumflex artery (LCX), as well as for the Left Main Trunk (LM). Cuts with the most distinct layer of EAT was chosen for measurement (Figures 1-3). Intra- and interobserver coefficients of variation were calculated for 50 scans and were 11.0% and 12.5%, respectively. 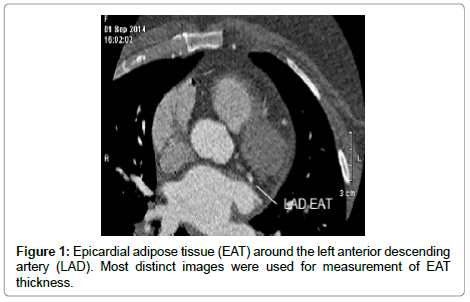 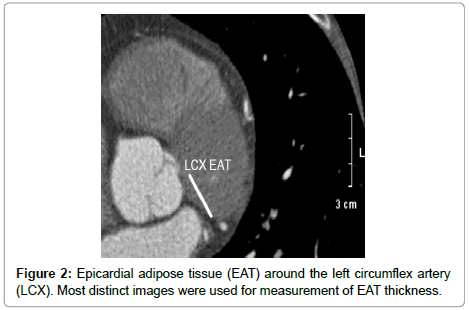 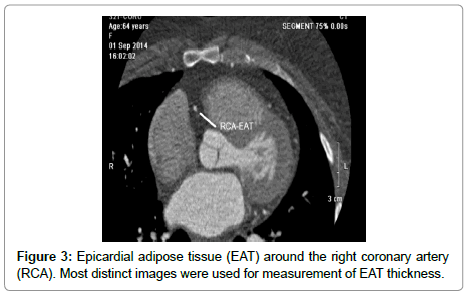 Data were collected, revised, coded and entered to the Statistical Package for Social Science (IBM SPSS) version 20. Qualitative data were presented as number and percentages while quantitative data were presented as mean, standard deviations and ranges. The comparison between two groups with qualitative data was done by using Chi-square test. Fisher exact test was used instead of Chi-square test when the expected count in any cell was found less than 5. The comparison between two independent groups with quantitative data and parametric distribution was done by using Independent t-test. The confidence interval was set to 95% and the margin of error accepted was set to 5%. The p-value was considered significant as follows: p>0.05: non-significant, p<0.05: significant, p<0.01: highly significant.

No statistically significant differences were observed between groups I and II with regards to age; height, body mass index, waist circumference, or waist/hip ratio. Baseline demographic data and anthropometric measurements for groups I and II are listed in Table 1.

Table 1: Baseline demographic variables and anthropometric measurements for Groups (I) and (II).

An average EAT was calculated for each coronary artery. Values for pericoronary epicardial adipose tissue (EAT) thickness for the entire study cohort are summarized in Table 2.

Table 2: Peri-coronary EAT in major epicardial coronary arteries (all in mm) for the entire study cohort.

Values for pericoronary epicardial adipose tissue (EAT) thickness for groups (I) and (II) are summarized in Table 3.

Table 3: Peri-coronary EAT in major epicardial coronary arteries (all in mm) for Groups (I) and (II).

Pericoronary epicardial adipose tissue (EAT) and visceral adipose tissue share a common embryological origin. Both act as reservoirs for inflammatory cytokines, which have a role in the pathophysiology of atherosclerotic vascular disease. EAT and visceral adipose tissue were previously demonstrated to be associated with cardiovascular disease and risk factors, including diabetes mellitus [7-9] insulin resistance [7,10,11] hypertension [12-14] and dyslipidemia [15-18]. In the Framingham Heart study, the volume of visceral fat determined by CT was associated with multiple metabolic risk factors as well as metabolic syndromes [19].

Although the exact pathophysiologic mechanism has not been established, it has been hypothesized that EAT release inflammatory signals that promote atherogenesis in coronary arteries [13]. Mahabadi et al., demonstrated a strong independent association between the local pericoronary fat (immediately surrounding the coronary arteries) and the presence of both non-calcified and calcified coronary artery plaques [20].

The current study explored the relation between pericoronary epicardial adipose tissue (EAT), and coronary artery calcification and/or atherosclerosis in a specific patient subset; post-menopausal women; utilizing the multi-detector CT (MDCT). Any potential protective effect of female hormones would be negated by including this patient subset.

Many studies have demonstrated a strong association between EAT thickness and/or volume and an increased CAC, coronary plaque burden, and major adverse cardiac events (MACE) [21-27]. These findings and our observation of strong association between EAT and documented coronary lesions (non-obstructive as well as obstructive) suggest that pericardial fat may play a more direct role in the etiology of coronary atherosclerosis. These results coupled with the results of Mahabadi et al. point to the importance of baseline CAC score and EAT measurements. In Mahabadi et al.’s study, 3367 subjects had had median CAC scores measured at baseline and remeasured after a follow up period of 5.1 ± 0.3 years. Those subjects with progression of CAC scores above the median were demonstrated to have had higher EAT volume than subjects with a less pronounced CAC change (101.1 ± 47.1 ml vs. 84.4 ± 43.4 ml; p<0.0001) [28].

Similarly, Kim et al. in a study conducted on 209 subjects using MDCT before diagnostic coronary angiography, demonstrated that EAT volume was higher in the CAD group (P<0.001), and the severity of coronary artery disease increased linearly with each tertile increase in EAT volume (P for trend<0.05). Similarly, the CAC score was also increased with each increase in EAT tertile (P=0.002). They observed that EAT volume measured by MDCT was associated with the presence and severity of CAD and may give important information about risk evaluation in CAD [29].

The current study did not include a systematic follow-up of females enrolled. Nonetheless, the results of previous studies, indicate that baseline EAT measurements at baseline have a definite diagnostic utility, and that regular EAT follow-ups have prognostic implications for patients with subclinical, as well as clinically overt coronary artery disease.

The current study is limited by the small sample size, the lack of follow-up at short or long term, the assessment of epicardial adipose tissue (EAT) thickness by one -rather than multipleimaging modalities. A comparison between premenopausal and postmenopausal women could have shed some light on the potential protective effects of female hormones, and the mechanism through which this protective effect was exerted. Software for EAT volume assessment (which is a more accurate estimation of epicardial adipose tissue burden) was not available on the multi-detector CT scan utilized in the current study. The current study is also limited by the absence of verification of coronary stenosis severity by the standard bench mark invasive coronary angiography.