Background: There has been a considerable debate over dietary salt reduction. The objective of this survey was to understand Indian medical practitioners’ knowledge and perception on benefits of dietary salt restriction in real life setting.

Materials and methods: A prospective, cross sectional, observational, questionnaire-based survey was conducted among registered Indian practitioners. The questionnaire consisted of questions based on practitioners’ knowledge regarding the salt intake in their patients, perception on laws regarding salt restriction and awareness of their patients’ knowledge regarding salt restriction. Data was summarized by percentage graphs.

Results: A total of 674 practitioners participated in survey across India. Majority of the participants (67.8%) stated that their patients were aware of the harmful consequences of excessive dietary sodium intake. Almost 43% of doctors stated that salt added during cooking or table salt was the main source of salt in the Indian diet whereas 29% of doctors responded that salt from processed foods such as breads, noodles, etc. is the main source of salt in the Indian diet. Most doctors (49%) were aware of the WHO recommendation for dietary salt intake for an Indian adult i.e. 5 g/day. About 52% of the doctors agreed that their patients should reduce the salt intake. About 24% of doctors stated that there are no major barriers to discussing ways to reduce dietary sodium intake with hypertensive or pre-hypertensive adult patients. Approximately 40% stated lack of patient awareness, paucity of scientific evidence and non-compliance as some of the major barriers for dietary salt reduction.

Conclusion: The overall results from this survey strongly support the current public health policy for a reduction in salt intake. Another fact highlighted by this survey was that there is a paucity of well-planned education campaigns and dietary salt reduction programs in India.

Recent reports suggest that hypertension is one of the leading causes of global disability. [2] Meta-analysis of multiple prevalence studies, conducted by Kearney et al, stated that approximately 25% of adults worldwide suffer from hypertension [3]. It is estimated that this number will rise to 29% by 2025. Prospective Studies collaboration of a million subjects noted a direct relationship between blood pressure levels, cardiovascular and cerebrovascular mortality [4]. This finding was confirmed by the Framingham study as well [5].

An important risk factor for increased risk of hypertension documented in literature is excessive consumption of salt [6-8]. The recommended value by World Health Organization (WHO) for daily dietary salt intake is 5 g/day and <2000 mg sodium per day [9]. A sodium intake of <2300 mg/d is suggested by Canada’s 2010 Sodium Working Group [10] whereas the American Heart Association suggests sodium intake of <1500 mg/d [11]. A sodium restriction of <2300 is recommended by the recently published 2015 Dietary Guidelines for Americans [12]. The dietary food guidelines for Indians published by the Food and Agricultural Organization of the United Nations recommended that the dietary salt intake should be <2400 mg/d [13].

It is known for years that the relationship of blood pressure and salt intake is direct and progressive. Scientific literature suggests a consistent dose-response relation between blood pressure and salt intake and the range is thought to be within 3 to 12 g of salt per day. [14,15] Previously published data also suggests that a reduction of only 3 g/d may reduce blood pressure by 3.6 to 5.6/1.9 to 3.2 mmHg in hypertensive subjects and 1.8 to 3.5/0.8 to 1.8 mmHg in normotensive subjects. An ordinary reduction of 6 g in daily salt intake for around 4 weeks may decrease blood pressure by 7.11/3.88 mmHg in hypertensive individuals and 3.57/1.66 mmHg in normotensive individuals [14,15].

The present survey was a prospective, cross sectional, observational, questionnaire-based survey conducted across India from May 2018 to June 2018.

Registered medical practitioners with recognized qualification in cardiology or endocrinology (MS/MD/DM) working in public and private clinics/hospitals participated in this survey.

Data was summarized categorically by number ‘N’ and percentage (%) in each category where ‘N’ represents total number of participants responding to each question. Data was interpreted and summarized in graphs. A few participants have responded to more than one option for some of the questions and some participants did not answer all the questions.

As this was a survey where no patient related data was captured hence ethics committee approval was not essential and so not obtained. Likewise, since this was not a clinical trial, clinical trial registration was not needed.

A total of 674 practitioners participated in survey across India. Final data of 674 participants’ responses were evaluated and analyzed as follows: 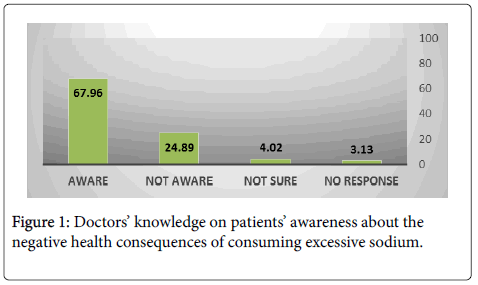 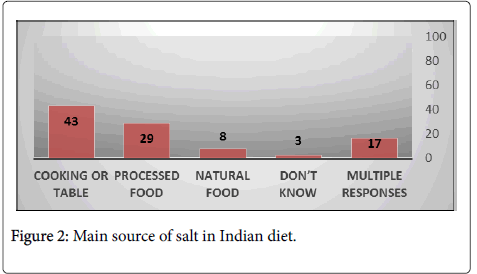 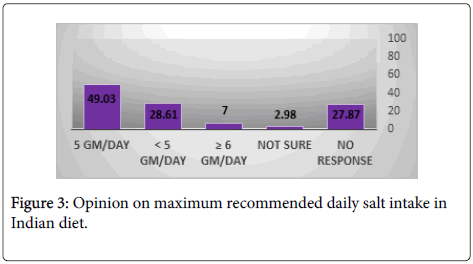 About 24% of doctors stated that there are no major barriers to discussing ways to reduce dietary sodium intake with hypertensive or pre-hypertensive adult patients. Approximately 23% doctors stated lack of patient awareness, 15% stated paucity of scientific evidence and 12% mentioned non-compliance as some of the major barriers for dietary salt reduction (Figure 5).

Approximately 53% doctors were in agreement with the fact that there should be laws governing addition of salt in manufactured foods (Figure 6). Total 49% of doctors agreed that it is difficult to understand sodium information displayed in food labels (Figure 7). Almost 68% doctors were of the opinion that when eating out at restaurants/cafes/ pubs, lower salt options are not readily available or available only in limited variety (Figure 8). 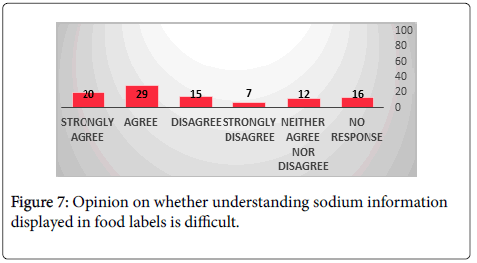 Figure 7: Opinion on whether understanding sodium information displayed in food labels is difficult.

To the best of our knowledge, no randomized controlled trials have studied the effect of reducing the salt intake of populations on cardiovascular disease and overall mortality. However, the link is strong and generally accepted by the physicians and regulatory authorities. Although, the argument for reduction in salt intake to prevent cardiovascular disease is strong, physicians’ attitude towards salt intake plays a major role. This study focuses on the knowledge, attitude and practices of the physicians with regard to reducing salt intake in their patients.

Over years, there has been a considerable debate on dietary salt reduction leading to what is known as ‘salt controversy’. Clear evidence indicates that reduction of salt intake lowers blood pressure and reduces the risk of hypertension and other cardiovascular disease (CVD). The WHO has recommended a population-wide target of reducing intake of salt from present level of 10 g daily to <5 g per day [17]. This recommendation has been challenged by several studies, including cohort studies, which have suggested a J-shaped relationship between salt intake and CVD risk [17]. However, these studies were associated with several methodological problems, like reverse causality and assessment of salt intake by spot urine which led to measurement errors [17]. In light of the available evidence, measured and continuous salt reduction as recommended by the WHO remains a feasible and effective method to prevent the risk of hypertension.

Majority of the participants stated that their patients were aware of the harmful effects of excessive dietary salt consumption. According to most participants, salt added during cooking or table salt is the main source of salt in the Indian diet whereas few of the participants responded that salt from processed foods such as breads, noodles, etc. is the main source of sat in the Indian diet. This finding is in agreement with previous reports of dietary salt in Indian scenario [18,19].

Major barriers for reducing the salt intake reported in the present survey were lack of strong evidence, lack of patient education tools, poor patient compliance. These barriers could be overcome by conceptualizing and executing various salt reduction programs thereby creating a platform for patient education and motivate them to restrict dietary salt.

The UK has pioneered a successful salt-reduction program undertaken under joint leadership of Consensus Action on Salt and Health (CASH; a nongovernmental organization) and the Food Standards Agency (a quasi-governmental organization). This deal warrants a ‘level playing field’ for the food industry as all the major food and nutrition companies would have to aim for the similar targets. A sizeable progress has been made since the program was initiated, and the salt content in many foods has been reduced by 20–50% [19].

A similar 3-year initiative called ‘A National Salt Reduction Program for India’ has been undertaken to develop the awareness required to design a nation-wide dietary salt reduction program. The program is structured to develop an elaborate policy response and action plan by the Indian government, covering stores, street vendors, chain restaurants, food manufacturers and consumers. The sodium content would be reduced and the information on the labels would be easier to understand [22].

The overall evidence strongly supports the current public health policy for a reduction in salt intake. The result from the present survey is in accordance with this finding. An interesting fact highlighted by this survey was that there is a paucity of well-planned education campaigns and dietary salt reduction programs to overcome the barriers in achieving the WHO recommended daily salt intake. This makes it extremely important to have more robust initiatives in collaboration with the food industry dedicated to dietary salt reduction.