Background: The myofibers of the heart has geometric orientation that induces its characteristic wringing motion around its long axis during contraction leading to the systolic LV twist. This motion is created by the apical and basal rotations that are oppositely directed and has an important role in regulation of LV function. Several studies have demonstrated that LV systolic function and mechanics had delayed deterioration after RV apical pacing with limited data regarding the acute effects.

Methods: This study was conducted on Twenty-Four patients who were indicated for pacemaker insertion due to complete heart block. Echocardiographic examination was done to measure the LV dimensions and ejection fraction (EF) before and 24 hours after RV apical pacing. LV twist changes were assessed by using speckle tracking imaging modality.

Conclusion: Pacing of RV apex impairs the LV rotational mechanics acutely which subsequently have a detrimental effect on LV function.

Cardiac pacing is considered the most effective treatment in the management of bradyarrhythmia and some cases of tachyarrhythmia. It helps in improvement of symptomatic SA nodal disease and atrioventricular (AV) block [1].

But what is more important is that these trials have suggested a strong relationship between right ventricular (RV) apical pacing and cardiac morbidity and mortality. The direct electric stimulation of the RV apex induced an abnormal activation sequence and hence asynchronous ventricular contraction [7-9]. Subsequently, LV performance is impaired leading to a decrease in the stroke volume and abnormal relaxation [10].

The apex of the heart rotates in opposite direction to the base resulting in the twisting of the left ventricle around its long axis which is determined by the contracting myofibers in the LV wall [11,12] as they are arranged in opposite directions between the subendocardial and subepicardial layers [13-15]. This twisting motion plays an essential role regulating both the LV systolic and diastolic functions [16].

The LV rotational mechanics are sensitive indicators of the cardiac performance [13,17]. Many studies demonstrated that LV systolic function and mechanics had a delayed deterioration after RV apical pacing [8-10]. This study aimed to assess the short-term effects of apical RV pacing on LV function and twist mechanics using speckle tracking echocardiography.

After approval of Menoufia Ethics Committee for the study proposal, Twenty four patients indicated for pacemaker insertion were included in the present study. In twenty three cases the indication of pacemaker insertion was to treat complete heart block and in the remaining case the indication was to treat sick sinus syndrome. We excluded patients with LV systolic dysfunction ((EF < 40%)), acute coronary syndrome, significant valvular heart diseases, myocardial diseases and bad echogenic window.

A transthoracic echocardiographic examination was performed for every patient before and 24 hours after pacemaker insertion and then off line analysis was done to measure LV twist. We used the available machine (Vivid 9, GE Vingmed Ultrasound AS, Horten, Norway) equipped with a 1.7-4 MHz phased-array transducer with simultaneous ECG tracing. All the patients were lying in the left lateral position during the examinations to allow for a better image quality [18]. 2-dimensional parasternal long axis view was obtained by placing the probe at the left sternal border in the third intercostal space with the probe marker directed to the right shoulder.

We measured the end diastolic diameter of the left ventricle, the end systolic diameter and the ejection fraction (EF) using M-mode modality with the curser perpendicular to interventricular septum and posterior wall passing through mitral valve tips [19]. 2-dimensional parasternal short axis views were obtained by rotating the probe 90 degrees clockwise while in the parasternal long axis position directing the marker towards left shoulder.

Speckle-tracking imaging analysis was performed using the available software (Echo PAC BT 12, GE-Vingmed; Norway). We manually traced the endocardial border of the LV and then the software automatically generated a second, larger, concentric tracing at the epicardium so that all the LV myocardium became included. Then, the software automatically transformed each LV view into 6 equal segments and performed the speckle-tracking on a frame-to-frame basis [18]. 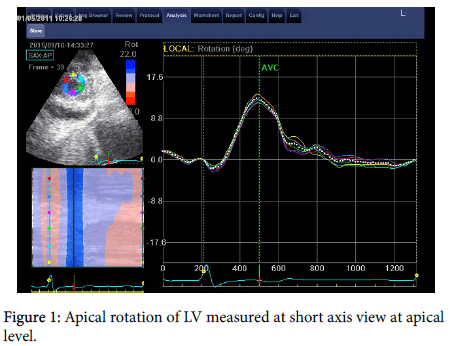 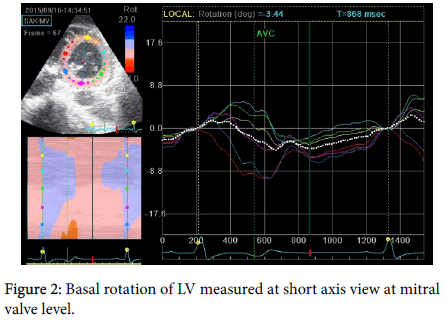 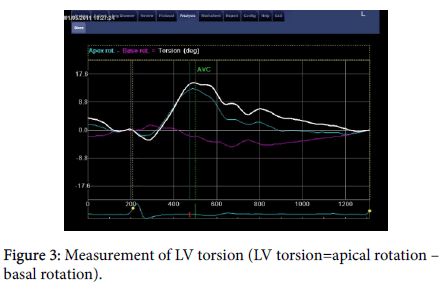 Data was statistically analyzed by using the well-known program statistical package for social science (SPSS) version 13 for windows (SPSS Inc., Chicago, IL, USA) and during all the analysis process a p value below 0.05 was considered statistically significant. Data are shown as mean, range or value and 95% confidence interval (95% CI) and frequency and percent. Paired t-test was done for comparing two normally distributed variables related samples to measure mean and standard deviation. The Wilcoxon signed-rank test is was used for comparing two non-normally distributed related samples.

The long-term effects of RV apical pacing on LV function and mechanics have been detected in many previous studies, [7,8,10,20] but unfortunately no much data is available about the acute effects. Our study showed that the LVEDD decreased acutely after RV apical pacing which may be simply explained by the increase in heart rate and consequently a shorter time for LV diastole.

On the other hand the LVESD increased acutely after RV apical pacing and we contributed this to the expected decrease in the stroke volume according to Franc Starling law due to decreased myocardial stretch after pacing. The EF significantly decreased in our study after pacing in agreement with Maher Nahlawi et al. [21] study which showed a significant decrease in EF after short term (2 hours) RV apical pacing in patients with sinus rhythm, and intact AV conduction..

Sorger et al. [23] studied the impact of different pacing sites on left ventricular (LV) torsion in a canine model by using tagged magnetic resonance. The following pacing sites were used, right atrial pacing, right ventricular pacing, and simultaneous pacing from the RV apex and LV base. Their study showed significant reduction in LV twist in case of RV apical pacing and biventricular pacing in comparison with atrial pacing so, it was clear that activation of the heart outside the normal sequence provided by the His-Purkinje system radically alters the normal pattern of LV torsion and this also comes in agreement with our study.

Victoria Delgado et al. [24] was the first study to detect the effect of RV apical pacing on LV twist in humans using speckle tracking echocardiography and they found a significant reduction in LV twist acutely after pacing in agreement with our results. Victoria Delgado et al. added a new explanation for the reduction of LV twist which is the impairment of LV longitudinal shortening. The LV has a complex architecture that shows a characteristic pattern of deformation consisting of shortening in the longitudinal and circumferential directions during systole [25]. This pattern of deformation explains the typical wringing motion of the heart with a net counterclockwise rotation of the apex relative to the base [26]. Any abnormality in this complex pattern of deformation and twist can lead to a significant affection on cardiac performance.

LV twist is a sensitive indicator for LV function but further studies are needed to assess the acute and chronic effects of different pacing sites on LV twist and function.

Small number of patients in the study. Many patients were included in the study before pacemaker implantation but they were excluded as the pacemaker was inserted in the interventricular septum. Simpson’s role is the recommended method for assessment of EF as mentioned by the latest guidelines of the American College of Cardiology. Most of our patients were elderly and it is well known that aging itself affect LV Torsion. Lastly our patients have different heart rate before and after pacing and it is not known if this difference would affect LV torsion.

Pacing of RV apex impairs the LV rotational mechanics acutely which subsequently have a detrimental effect on LV function. Further studies are still needed to evaluate the early and long term effect of different pacing sites other than the RV apex on LV twist and untwist as sensitive indicators of LV function