The degrees of soil salinity in the Azerbaijan Republic are known to be quite different. Despite widespread chloride-sulphate and sulphatechloride salinization, carbonate salinization is not uncommon. Sodium salinization also prevails [1,2]. Thus, the clarification of the mechanisms of salt effects on plants and the adaptive reactions of plant organisms has not only theoretical, but also great practical importance.

Recently, complex studies of physiological, biophysical and biochemical aspects of plant salt tolerance have been performed [1,3,4].

In this case, a more logical is a comparative study of the respiratory and reductive activities of the root system of plants differing in their salt tolerance. The study of the above physiological processes in seedlings under the influence of potassium permanganate and salts provides important information about the primary mechanisms of the metabolic disturbance in the plant organism.

Objects and methods of the study

The objects of the study were 5-day-old seedlings (not considering the day of seed soaking), of widely used in agriculture varieties of barley (Garabagh-21) wheat (Sharg), beans (local Piyada). The seedlings were grown in Knop’s solution and in 50 mm, 100 mm and 150 mm NaCl solutions. Salinity began on the 3rd day in a thermostat at 25°C under aerated conditions.

The photocolorimetric method using the dye 2,6-dichlorophenolindophenolate sodium (2,6-DCPIP) at a concentration of 10-3 M with the redox potential +0.217 V was used to determine the reducing activity of the root system homogenates.

The polarographic method was used to determine the rate of oxygen uptake by the plant roots (Gasymov, 2012).

The polarographic method with a platinum electrode is widely used in the study of oxygen metabolism in various organisms. The main advantage of this method is that the method allows determining the content of oxygen, directly in a living organism. This method is frequently used in physiological studies on animals and plants. The sensitivity of the polarographic device was 3.2·10-7 M/l О2. The experiments were performed in 3 and 5 replicates, and the results were calculated on 1 g root fresh weight. The obtained data were statically processed according to G.F. Lakin (1990).

Changes in the rate of oxidative reactions in plants under the influence of salt should also affect the shift of equilibrium between the oxidative and reductive activities of the root system of plants. The total definition of the reductive activity of plant roots during extreme salinity can also be one of the integral indicators of the intensity of cellular metabolism, in particular, the rate of oxidative processes, because the rate of biological oxidation, along with other factors, is also limited by the content of the substrate, i.e. the content of recovered products [5].

We have studied the kinetics of the reduction of the dye 2,6-DCPIP by homogenates of glycophytes with contrasting salt tolerance-barley (high salt tolerance), wheat (medium salt tolerance), beans (weak salt tolerance). Reductive activity of the root system of beans was found to be higher compared with that of wheat and barley (Figure 1). 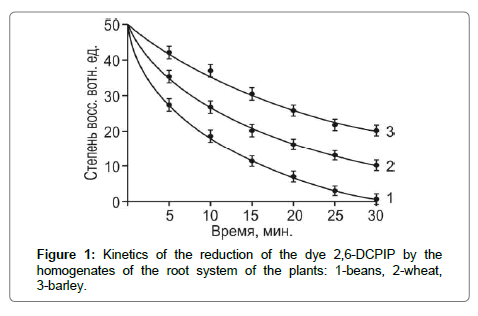 Figure 1:Kinetics of the reduction of the dye 2,6-DCPIP by the homogenates of the root system of the plants: 1-beans, 2-wheat, 3-barley.

The results of the study showed that the pre-soaking of seeds in solutions of the potassium permanganate preparation (10-3 М; 10-4 М; 10-5 М) usually decreases the reductive activity of the roots of seedlings. When the substrate was salinized with 50, 100 and 150 mM NaCl, all the used concentrations of potassium permanganate also decreased the reductive activity of the roots, but in this case the reduction was more pronounced than in the seedlings grown without salinization of the substrate [6]. 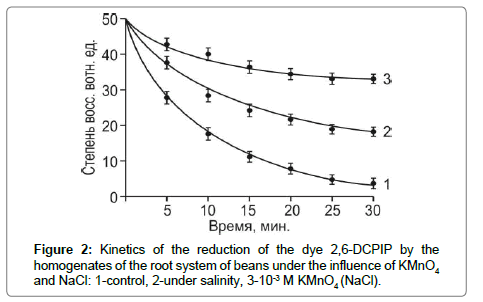 Figure 2:Kinetics of the reduction of the dye 2,6-DCPIP by the homogenates of the root system of beans under the influence of KMnO4 and NaCl: 1-control, 2-under salinity, 3-10-3 ? KMnO4 (NaCl).

It is known that the processes of energy supply and its utilization play an important role in the normal functioning of the cell. Therefore, the study of the efficiency of respiration in seedlings with contrasting salt tolerance under extreme salinity will provide important information on primary mechanisms of the disturbance of metabolism in the plant organism.

According to our results, barley roots uptake less oxygen, than roots of wheat and beans (Figure 3). Thus, by the intensity of O2 uptake, the plants we studied are normally arranged in the following order: beans˃wheat barley. 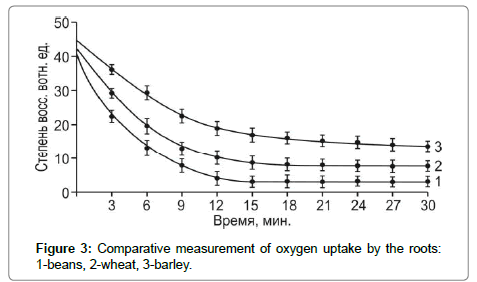 Experiments showed that with increasing salt concentration (50- 150 mM NaCl), oxygen uptake of the seedlings decreases linearly. Pre-soaking of seeds in a KMnO4 solution increases the intensity of respiration in seedlings under salinity.

It was established that the rate of O2 uptake by the roots and the reductive activity of the root system of plants correlate inversely with salt tolerance [7,8].

The results obtained show that at low concentrations (10-3 М) of NaCl, the total reductive capacity of the root system and the intensity of respiration are slightly different from the controls.

These data suggest that, under the influence of high NaCl concentrations, the components and substrates of the plant respiratory systems are rapidly transferred to the oxidized state with increasing salt concentrations.

The results of the experiments allow a more comprehensive understanding of the nature of the plant salt resistance, and thus contribute to the development of more effective methods of diagnostics and increasing salt resistance of cultivated plants.