Efficacy and Safety of Tolvaptan in Infants after Open Heart Surgery

Background: Reports on the efficacy of tolvaptan, which is a selective vasopressin V2 antagonist, in infants who undergo cardiac surgery are rare. We evaluated the efficacy and safety of tolvaptan to manage early fluid retention in infants following open heart surgery.

Methods: Pediatric patients under the age of 1 year who underwent biventricular repair with CPB were received conventional diuretics. Additionally, tolvaptan was administered in 18 patients two days after the administration of conventional diuretics when conventional diuretics did not effectively control fluid. For the evaluation of the effect of tolvaptan, the cumulative 24-h urine volume was measured. Changes in laboratory values, cardio hemodynamic factors, and all adverse events were also evaluated.

Conclusions: The addition of tolvaptan to conventional diuretics increases urine volume without major adverse events, and could be beneficial to control fluid in infants who underwent open heart surgery.

In infants with congenital heart disease, high pulmonary blood flow and pulmonary artery pressure lead to an increase in pulmonary vascular resistance (PVR) preoperatively, which is aggravated by the development of overt pulmonary endothelial dysfunction after cardiopulmonary bypass (CPB) [1]. In some patients the postoperative increase of PVR may be more marked, regress slowly, show intermittent spontaneous or precipitated crisis-like exacerbation, and require prolonged ventilation and specific strategies to maintain lower PVR [2].

Cardiac surgery with CPB causes a marked increase in total body water due to heavy fluid load. Postoperative fluid overload in infants following cardiac surgery with CPB may raise PVR and leads to pulmonary hypertension crisis, which is associated with increased morbidity and mortality [3,4]. Thus, appropriate fluid management in the early postoperative period significantly improves the patients’ prognosis and respiration can be managed more easily. Loop diuretics, such as furosemide, are usually the first choice drug to treat diuresis immediately after cardiac surgery, but the effectiveness of this method is sometimes limited, and a high dose of loop diuretics leads to reduced sodium and intravascular volume, increases in the renin-angiotensinaldosterone system (RAAS), and deterioration of renal function.

Tolvaptan, which is an orally administered, selective vasopressin V2 antagonist, has only been approved for the treatment of heart failure. Tolvaptan promotes the aquaretic effect without adverse effects, such as low blood pressure, electrolyte abnormalities, adverse effects on renal function, or increased RAAS activity [5].

This single center, retrospective study investigated pediatric patients under the age of 1 year who underwent biventricular repair with CPB between June 2013 and March 2017 in Tenri hospital. Institutional review board approval was granted and patient consent was waived for this retrospective study. Permission to collect data prospectively was obtained from the parents prior to entering the study. All clinical and operative notes were reviewed in detail.

Patients received convention diuretics doses of 2 mg/kg of furosemide and spironolactone starting on postoperative Day 2. Additionally, 0.20 mg/kg of tolvaptan was administered in 18 patients two days after the administration of conventional diuretics when conventional diuretics did not effectively control fluid. The criteria for uncontrollable fluid were as follows: 1.The cumulative 24-h urine volume was less than 75.0 ml/kg and 2.Chest radiographs showed congestive heart failure. Tolvaptan was administered once daily, and the use of tolvaptan was limited to 2 consecutive days (Day 4,5) during the intensive care unit stay. The preoperative baseline characteristics and perioperative factors of the patients in this study are listed in Table 1.

Data are expressed as mean ± standard deviation and were analyzed using Student’s t-test for continuous variables and a chi-test was use categorical variables using SPSS software (SPSS Inc, Chicago, IL). Differences were considered statistically significant when the p-value was less than 0.05. 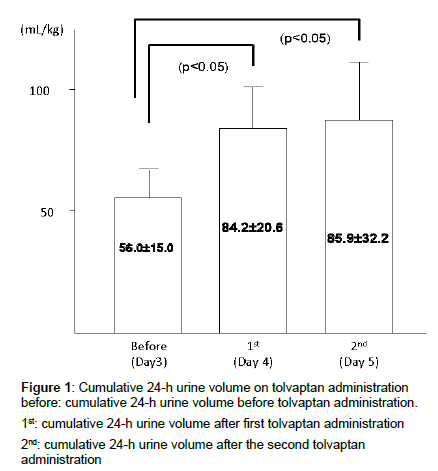 We investigated the efficacy and safety of tolvaptan for the management of early postoperative fluid retention in infants following cardiac surgery with CPB. We showed that adding tolvaptan to conventional diuretics in infants who underwent biventricular repair with CPB increases urine volume without major adverse events.

Regan et al. demonstrated that tolvaptan increased urine volume and elevated the serum sodium concentration in pediatric patients with chronic heart failure [6]. A recent report has indicated that the combination of tolvaptan with conventional diuretics increases urine output after open heart surgery in adult patients [7]. We hypothesized that tolvaptan would demonstrate effectiveness for acute heart failure after open heart surgery in infants. Higashi et al. reported that 0.25 ± 0.18 mg/kg/day of tolvaptan can be effectively and safely administered for chronic heart failure in pediatric patients whose mean age was 49.1 ± 60.8 months [8]. Thus, 0.20 mg/kg of tolvaptan was administered once daily in this study because postoperative hemodynamics were unstable in infants who underwent cardiac surgery with CPB. Usually, acute heart failure after cardiac surgery with CPB recovers over time. The use of tolvaptan was limited to 2 consecutive days and within 7 days after the operation because acute heart failure within about a week after cardiac surgery with CPB was closely connected closely to respiratory control in infants. In the current study, the urine volume was significantly increased after the addition of tolvaptan according to our protocol.

A recent report demonstrated that 18.7% of adult patients who were given tolvaptan had experienced adverse drug reactions [9]. We could find no adverse events including drug reactions in this study. Because infants could not express thirst and dry mouth, we might not have noticed their complaints. An elevation in serum levels is a major side effect of tolvaptan due to sodium retention. However, there were no patients with a severe elevation in serum sodium level in this study. The fact that an electrolyte imbalance and severe dehydration did not occur in the patients in this study proved the safety of tolvaptan in infants who underwent open heart surgery.

We also evaluated intubation time to clarify the efficacy of tolvaptan to treat acute heart failure after the operation and control respiration in infants. However, 2 patients had tracheomalacia and they were discharged with intubation in this study. In next study we will re-evaluate the efficacy of tolvaptan to control respiratory failure after open heart surgery.

We acknowledge that the present study has several limitations. First, there was limited number of patients and a patient selection bias, because this study was retrospective. Second, we only enrolled patients with biventricular repair of “simple” cardiac defects to evaluate the efficacy and safety of tolvaptan for acute heart failure with CPB, and not for heart failure of patients. Tolvaptan may be required after surgery for acute heart failure in patients with complicated heart defects. The dosages and duration of tolvaptan administration were also limited because dosing for pediatric patients, especially for infants after cardiac surgery has not been established. Further investigation with other dosages and duration of tolvaptan will be needed, especially for patients with complicated heart defects.

None of the authors of this manuscript has any financial of personal relationship with other people or organization that could inappropriately influence their work.