The microcrustacean Daphnia play an important role in carbon transferring from primary producers to higher trophic levels [1]. It   is the primary consumer feed on bacteria, algae, protozoa, detritus, and yeast and principal prey of many fish species [2]. Therefore, the changing of its population can cause a significant effect on freshwater food webs [3,4]. Also, Daphnia has been considered an important representative of Cladocerans in both basic and applied aspects of research due to the short life cycle, small size, and easy to maintain in the laboratory [5,6].

One of the interesting  characteristics  of  Daphnia  (Cladocera) is cyclical parthenogenesis, i.e., they have two different types of reproduction including sexual and asexual (parthenogenetic) reproduction modes in its life cycle. During the parthenogenetic cycle, females produce diploid eggs that develop directly into daughters. Sexual Reproduction in which female Daphnia produces haploid eggs that require fertilization by males. Then, these eggs are enclosed in   a protective shell ( Ephippia) and need to undergo a diapause before female offspring will hatch from them [6-8].

Ephippia play an important role in maintaining the Daphnia population during harsh environmental conditions such as high population density, low food, too high or too low temperature, drought [9,10], co-existing of predators [11]. The dormant eggs, diapausing or resting eggs, cysts or statoblasts that often sink and accumulate in sediments, forming egg banks [12] which have proved an important tool for biodiversity studies, understanding the environmental cues that induce Ephippia hatching, ecological biogeography, paleolimnology, nature conservation, evolutionary ecology, and community population ecology, and taxonomy [13]. One another function of Ephippia is to invade new aquatic areas through transporting by water, animals, or human transport [14]. Also, Daphnia Ephippia morphology was used as a key for the identification of some Daphnia species [15].

Also, Cladocerans are used in aquaculture industry due to their abundance, tolerance to environmental conditions, high nutritional quality, ease of handling and sorting from other zooplanktons, suitable sizes (0.2 mm-6 mm), parthenogenetic reproduction, short generation time, richness in digestive enzymes, and high caloric value [16,17]. Moreover, Cladocerans as a potential live feed available in small ponds and lakes [18] have gained certain economic importance as they are widely used in larvae aquaculture, and large filter-feeding planktonic species have an indirect economic impact as important fish food or phytoplankton-controlling group [5]. Another research has reported high levels of protein, free amino acids, fats, and carbohydrates in Cladocerans like Daphnia carinata, D. longispina, D. magna, and D.pulex, which are considered valuable live feeds [19]. Therefore, Daphnia species are excellent food sources, which could provide quality first feed for fish and crustaceans [20,21]. The Cladoceran like Moina sp, Daphnia sp, etc. have already been explored as a living capsule of nutrition for many cultivable fishes [22]. On the other hand, Caldocerans as intermediate hosts of some parasites may potentially pose a threat to human health [5].

Despite a large number of studies on the mechanisms behind   the reproductive switch in Cladocerans [8], the exact environmental stimuli needed for sexual reproduction are still uncertain because zooplankton communities are very sensitive and react to a wide variety of environmental stress [23]. Several environmental factors have been reported as stimuli for switching between reproductive modes and Ephippia formation including ultraviolet light and storage time in darkness, temperature, pH, population density, food quantity and quality, photoperiod, fish kairomones, population dynamics and fecundity [8,23-30].

On the other hand, laboratory and field studies on nutritional deficiency in Cladocerans resulted in a negative effect on growth and reproduction. In extreme conditions, Cladocerans produce resting eggs and disappear from the plankton [31-34]. Also, most of the environmental factors research on the reproduction in Cladocerans was done with species of temperate origin including D. magna [8,28,35] and D. pulex [36,37], and very few have been done for the tropical species such as D. carinata [6,38].

Therefore, we performed this study to extend the experimental research on the effect of food quality on Daphnia reproduction and to present further evidence for the importance of food type on its reproduction mode. Consequently, we tested the effect of four different types of powdered food such as Rice, Wheat, Chickpea/Hummus, and Spirulina on the parthenogenesis and Ephippia production of  the tropical D. carinata. Besides, a mixture of the previous feeds was also tested to alleviate any nutritional deficiencies and Daphnia can benefit from its elements. Moreover, this study, up to our knowledge, is the first to test different powdered food on the reproductive mode in the tropical D.carinata and it could be important basics for further studies of D.carinata life cycle as a portion of live food in aquaculture and its important role in carbon transferring from primary producers to higher trophic level.

D. carinata used in the present study was hatched from Alshwaib- Dam within Abu Dhabi Emirate-UAE [39] and its life cycle (Figure 1) was maintained nearly for two years in the marine biology laboratory, United Arab Emirates University. Cultures were grown in desalinated commercial water (Oasis Company-AlAin, UAE) at 19°C ± 2°C and fed on a mixture of food (R, W, C, and S) under 12:12 hours light/dark conditions. About 150 no. of D. carinata, resting and parthenogenetic eggs- free females, were isolated from the maintained cultures in separate jars by a plastic dropper under the stereomicroscope (Leica, 200M 2000) and used in this research. Isolated D. carinata females were left for 48 hours in the laboratory to ensure that males did not fertilize them. The water used in stock and experimental cultures were filtered through a 0.22 µ micropore filter system before using in Daphnia cultures and salinity was checked by salinometer and was zero ppt. Data were statistically analyzed using SPSS, 17.0 for windows (SPSS, Chicago, IL, USA). Standard error was calculated and Analysis of Variance (ANOVA) was performed on the data to determine the Least Significant Difference (LSD) between treatment means with the level of significance at P ≤ 0.05. The average followed by the same letter does not differ, according to the t-test or one-way ANOVA (p ≤ 0.05). 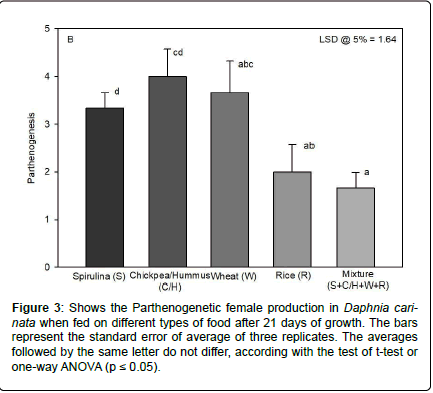 Figure 3: Shows the Parthenogenetic female production in Daphnia carinata when fed on different types of food after 21 days of growth. The bars represent the standard error of average of three replicates. The averages followed by the same letter do not differ, according with the test of t-test or one-way ANOVA (p ≤ 0.05). Figure 4: Shows the ephippia production in Daphnia carinata when fed on different types of food after 21 days of growth. The bars represent the standard error of average of three replicates. The averages followed by the same letter do not differ, according with the test of t-test or one-way ANOVA (p ≤ 0.05)

The enormous success of the genus Daphnia in freshwater ecosystems is at least partially due to their cyclical parthenogenetic life cycle, in which asexual and sexual reproduction alternate periodically. This  temporal  change  between  reproductive  strategies  allows for (1) rapid population growth via subitaneously (parthenogenetic) developing eggs when environmental conditions are appropriate  and (2) the maintenance of genetic diversity via sexual reproduction and the production of resting eggs when environmental conditions deteriorate [40]. The success of this reproduction mode is reflected in the known 620 species that radiate within Cladocera and the genusDaphnia,  within  Cladocera,  approximately  150  species-rich [41]. Besides, the reproduction in cladocerans can either be parthenogenetic (asexual) or maybe intermixed with periods of gamogenetic (sexual) reproduction. Two female morphotypes are thus recognized in the populations, which include the parthenogenetic individuals and ephippial forms. Although, parthenogenesis is the predominant mode of reproduction [42].

Also, this study proved that there was a relationship between the type of powdered food (R, W, C/H, S, and a food mixture) and the Ephippia production of the tropical D. carinata. This was evident because the animal group fed on a mixture of food (R, W, C/H, and S) has produced a significant number of Ephippia in comparison to (R or W, or S) groups. So, the results of the present research agree with the previous studies, which reported that the life history traits of Cladocera change depending on the quality and quantity of the resource [55, 43]. Besides, a mixture of food (R, W, C/H, and S) which contains a combined high concentration of all ingredients found in these feeds, may increase and block the filtration system of Daphnia and switch its reproduction mode as an unfavorable condition. Moreover, minerals in a mixture of food have increased and it may be another stimulus for the Ephippia production because the elemental characterization of Daphnia resting eggs by X-ray analytical microscopy demonstrated that phosphorus, sulfur, potassium, and calcium were detected as elemental components of the resting egg [56,57].

On the other hand, it was reported that food limitation is not     an obligate requirement of shifting from parthenogenesis to sexual Ephippia production in D. carinata [6]. This research showed that Rice alone produced the least number of Ephippia between all groups because there was a significant decrease in its formation in comparison to (W, C, S, or a food mixture). This may be because Rice does not contain essential lipids, sterols, minerals, and especially amino acids like arginine, histidine, and eicosapentaenoic, which  are important components needed for the formation of Ephippia in Daphnia [36,40,58]. Also, the number of parthenogenetic females was low in comparison to (S, C/H, and W), and this is in agreement with the previous reports which found that food limitation/deficiency is a major cause of reduced fertility in Simocephalus expinosus (Cladocera: Daphinidae) reproducing smaller-sized females which matured slowly and generate a lesser number of neonates [59,60]. Moreover, mineral limitation such as calcium was found to affect reproduction, molting, and population growth when food quality and quantity is low [61].

The results of this study have revealed that Wheat, Chickpeas/ Hummus or Spirulina powder has triggered the parthenogenesis in D. carinata and can be used in aquaculture of D. carinata as a highly nutritive and cheap live food. Moreover, sexual Ephippia production in D. carinata could be promoted when fed with a  mixture  of  highly nutritive powdered food consists of Rice, Wheat, Chickpeas/ Hummus, and Spirulina,which may be helpful for the production of an egg bank of this species. Indeed, the produced egg bank can be used in some invertebrate aquaculture or toxicological experiments for further understanding of the reproductive cycle of the tropical D. carinata. On the other hand, low-value nutritive food such as Rice was not an obligate requirement to change the mode of reproduction in the tropical D. carinata but it affects negatively on its life cycle by producing the lesser numbers of resting eggs and parthenogenetic females.

This research was fully funded by the Biology Department, FOS, UAE University as a part of the undergraduate research projects. Many thanks to the UAE University for supporting this research. Special thanks are extended to Prof. Waleed Hamza for his continuous support and guidance during the work.