Evaluation of Narcissus Genotypes under Karewa Condition of Kashmir Himalaya

Narcissus (Narcissus spp) is very popular winter bloomers, commonly known as Daffodils or Nargis, belongs to family Amaryllidaceae. The cut flowers are attractive due to earliness, magnificent odor and marvelous shades of white, yellow and light orange colour. Narcissus is popular as a cut flower, garden flower and pot plant and can be grown with little care in flower beds, around deciduous trees and as window garden. The crops ranked second in the world production of flower bulbs [1] and its commercial cultivation mainly confined to Europe and USA. The genus is characterized by central trumpet or disc shaped corona surrounded by six tapels. The flowers (1-7) borne on hollow scape of 25-30 cm height. Haadi-evincheh et al. [2] reported that genus Narcissus consisting of about 63 species and many sub specific taxa and natural hybrids. The number of cultivars increased rapidly and characteristics such as plant vigor and the size, shape, and colors of the flowers were markedly improved [3].

In narcissus commonly grown species include N. tezeta, N. pseudo-narcissus, N. poeticus, N. bulbicodium, N. albus, N. triandrus, N.odorus, N. jonquilla and N. cyclamineus and most of species are native to Mediterranean regions, however few species are reported from Central Asia and China [4]. It is earliest bloomer among the temperate bulbous crops and flowering starts from mid February and last up to mid April in Kashmir. Turkoglu et al. [5] reported that in narcissus natural vegetative reproduction is very slow as it produces 1.6 daughter bulbs annually and flower only in the third year of planting. The vase life is very short ranging from 4-8 days in plain water, which is not sufficient for distant market [6]. In Kashmir narcissus grow naturally in wild as well grown as bed plants and around deciduous trees in parks, lawns, houses, office premises and graveyard. According to Aslam et al. [7] it is among top ten ornamental genera with maximum number of species of Kashmir. Low temperature before 12 to 14 weeks is required for successful flowering of narcissus. A temperature of 9° C is ideal until the appearance of flower buds and 13-16°C for anthesis [8]. The similar type of congenial climatic condition is available in temperate regions of India particularly in Kashmir (Table 1). It is not grown commercially in India owing to short vase life and blooming period along with low multiplication rate. Therefore it is essential to evaluate narcissus genotypes under temperate condition of Kashmir Himalaya and find out promising genotypes for quality cut flower and bulb production.

The present study was carried out at experimental field of ICARCentral Institute of Temperate Horticulture, Srinagar during 2010- 2014 to evaluate the performance of eighteen narcissus genotypes collected from different parts of Kashmir valley. The experimental field is situated at about 33° 59' N latitude and 74° 46' E longitude and 1674.88 m elevation above mean sea level. The soil characteristics of experimental field were clay loam to silt clay, pH 6.81 and EC 0.36 dsm-1 with adequate drainage and water holding capacity. Healthy and uniform bulbs of 2.5-3.5 cm diameter and 15-20 g weight were used as planting material. The experiment was laid out in Randomized Block Design with three replications and twenty bulbs per treatment per replication were planted during second fortnight of November at the spacing of 20 x 20 cm2 on raised bed and at a depth of 10-12 cm. Uniform agronomic practices were followed during the experimentation. Crop was grown as biannual for two cycles from 2010 to 2014. The data were recorded on different parameters pertaining to growth, flowering and bulb production of different genotypes from five random plants in each replication. Vegetative and floral traits were recorded annually while bulb related attributes recorded at the end of each cycle. The plant propagation coefficient (%) is the ratio of the total weight of bulb and daughter bulb produced and the weight of bulb planted, expressed in percentage. Data were analyzed statistically as per the methods suggested by Gomez and Gomez [9]. The critical difference (CD) value at 5% level of significance [10] was used to determine difference between treatments.

Evaluation of narcissus genotypes (Figure 1) revealed that there were significant variation among the genotypes with respect to vegetative, floral and bulb attributes. These variations are owing to genetic background of the genotypes.

The evaluated genotypes exhibited vide variation in floral attributes (Table 3). Narcissus flower earliest among the temperate bulbous flowers, which is matchless characteristic and most liked. Earliest bud appearances was noticed in CITH-NS-1 (102.25 days) followed by CITH-NS-5 (103.45 days) and CITH-NS-2 (104.50 days) while delayed bud appearance was noticed CITH-NS-17 (116.68 days) and CITH-NS-11(114.32). The narcissus genotypes were classified in three groups early, mid and late bloomers based upon time of flowering i.e. before 10th March, 11th March to 20th March and after 21st March. Out of 18 genotypes evaluated five genotypes namely CITH-NS-1, CITH-NS-2, CITH-NS-5, CITH-NS-6 and CITH-NS-16 were early bloomer and five genotypes CITH-NS-8, CITH-NS-9, CITH-NS-11, CITH-NS-13 and CITH-NS-17 came in late category and remaining eight were mid bloomers. It may be due to different genetic composition and chilling requirement of the genotypes. These can be utilized for extending blooming period of narcissus, which is a major constraint in its exploitation. Variation in time of flowering in narcissus cultivars was also reported by Fry [13]. Earliness in narcissus genotypes was also observed by Rees et al. [14]. Flower scape length, corona and flower size are important criteria in quality of narcissus cut flowers. The highest value for flower scape length was recorded in CITH-NS-3 (32.34 cm) which was statistically at par with CITH-NS-1 (30.50 cm) and CITH-NS-15 (30.14 cm). Cohen et al. [15] also found variation in flowering time, size of flower and other morphological traits in narcissus germplasm. Similar variation in flower grade was obtained by Rees and Wallis [16] in narcissus. Number of flower per plant varied from 1 to 8 among different genotypes and found highest in CITH-NS-4 (8.00) followed by CITHNS- 6 (6.00). Flower size also varied significantly among different genotypes and recorded largest 9.69 cm in CITH-NS-15 and was at par with CITH-NS-10 (9.37 cm), CITH-NS-11(9.31 cm) and CITHNS- 1(9.22 cm). Smallest size flowers of 3.16, 3.21 and 3.70 cm were recorded in genotypes CITH-NS-6, CITH-NS-9 and CITH-NS-14, respectively. Corona is important features of narcissus cut flower. Corona diameter was recorded maximum 4.96 and 4.53 cm in CITHNS- 1 and CITH-NS-10 while minimum was recorded 0.83 and 0.98 cm in CITH-NS-6 and CITH-NS-16, respectively. Blooming period was varied significantly among different genotypes and was found superior in CITH-NS-1 (20.15 days) followed by CITH-NS-6 (19.00 days), CITH-NS-16 (18.64 days), CITH-NS-12 (18.55 days), CITHNS- 13 (18.25 days) and CITH-NS-2 (18.23 days). Genotypes CITHNS- 8, CITH-NS-9, CITH-NS-10, CITH-NS-15 and CITH-NS-18 were inferior owing to short blooming period (<15 days). Variation in flower size, corona diameter and flowering duration are in accordance with those reported by Siddique et al. [11] in narcissus. Vase life is an important parameter in cut flower quality and varied from 8.15 to 12.72 days (Figure 2) among different genotypes. It was recorded highest 12.72, 11.82, 11.45 and 11.05 days in genotypes CITH-NS-1, CITH-NS-4, CITH-NS-2 and CITH-NS-11, respectively. 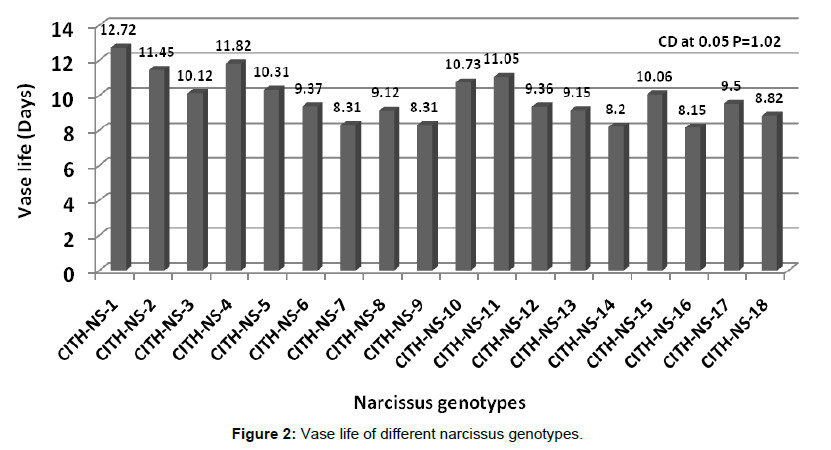 Wide variation was recorded in bulb characteristics like bulb number per plant, bulb size and weight, number of daughter bulbs per plant, daughter bulbs weight per plant and total yield (Table 4) among different genotypes. In narcissus bulb multiplication rate is slow, which hinders its commercial exploitation. The bulbs were categorized in two grades i.e. productive bulbs >10 g weight which can produce flower and smaller daughter bulbs <10 g weight, which further requires 1 to 2 years to produce flower, however flower production capacity also varied from genotype to genotype. Number of bulbs per plant was found significantly high in genotype CITHNS- 2 (5.10) followed by CITH-NS-3 (4.55) and CITH-NS-7 (4.41) as compared to lowest 1.20 in CITH-NS-14. Genotypes CITH-NS-7 was superior in respect of bulb size (4.38 cm) and at par with CITH-NS-4 (4.10 cm), CITH-NS-5 (3.81) and CITH-NS-1 (3.75 cm). Highest value for bulb weight 25.24 g was observed in genotype CITH-NS-5 followed by CITH-NS-7 (23.16 g) and CITH-NS-9 (22.95 g) while lowest bulb weight was observed in CITH-NS-17, CITH-NS-18 and CITH-NS-15. Variability in corm size, weight and number per plant was also reported by Kumar and Yadav [17] in gladiolus. Significant variability with respect to number of daughter bulbs per plant was observed and it was recorded maximum 10.41 in CITH-NS-3 which was statistically at par with CITH-NS- 6 (9.31) and CITH-NS-16 (9.00). Average weight of daughter bulb was also varied significantly and recorded highest in CITH-NS-7 (9.75 g) and CITH-NS-6 (9.27 g). Variation in daughter bulb number and weight was also noticed by Ranchana et al. [18] in tuberose. Genotype CITH-NS-6 produced highest total bulb yield 80.99 t/ha which was at par with CITH-NS-2 (74.66 t/ha) and CITH-NS-7 (71.25 t/ha) as against lowest 14.46 t/ha in CITH-NS-15 followed by CITH-NS-10 (15.70 t/ha). Propagation coefficient showed the multiplication rate of bulbs (Figure 3) and it was recorded highest 851.98 % in CITH-NS-3 followed by CITHNS- 6 (845.90%), CITH-NS-7 (784.69 %) and CITH-NS-2 (733.03 %). It may be due to high photosynthetic efficiency owing to higher number of leaves per plant, longer leaves and prolonged field life. Low multiplication was observed in CITH-NS-10 (251.24%), CITH-NS-15 (282.15%) and CITH-NS-9 (283.37%), which was probably due to less number of leaves of per plant, shorter leaf length and field life resulted in a reduced amount of photosynthates production and accumulation to the bulbs. Similar type of variation in bulbs and bulblets production was also noticed by Jhon and Khan [19] and Ahmed and Khurshid [20] in tulip. Owing to variation in different traits, narcissus had been classified in 11 groups [21] and utilized for developing new varieties. Based on different vegetative, floral and bulb attributes genotypes CITH-NS-1, CITH-NS-2, CITH-NS-3, CITH-NS-6 and CITH-NS-11 were found promising which can be utilized for quality cut flower and bulb production while CITH-NS-16 found suitable for planting in flower beds. Evaluation of narcissus genotypes also showed that it is an early bloomer, have attractive flower, high cut flower and bulb yield with wide variation in blooming period and vase life. It is hardy crop; require less care as compared with other temperate bulbous crops like tulip, lilium and hyacinth which can help in its commercial exploitation. It is conclusively proved that there is significant variation in narcissus genotypes which can be utilized for formulating further improvement programme.