Hepatitis C virus (HCV) infection is a major health problem worldwide. It is a well-documented systemic disease whose extra hepatic consequences increase the weight of its pathological burden. Paroxysmal nocturnal hemoglobinuria (PNH) is a rare but life-threatening bone marrow failure disorder that manifests with hemolytic anemia, thrombosis and peripheral blood cytopenia. Fortunately, the introduction of Eculizumab, a humanized monoclonal antibody, has brought a paradigm shift in PNH management and prognosis. We hereby report an unusual association of HCV and PNH which has witnessed persistent breakthrough hemolysis and progression to complications despite Eculizumab. Our report suggests reconsidering the management of PNH patients with HCV especially since the only approved PNH treatment (Eculizumab) is one of the world’s most expensive drugs and must be administered indefinitely for a sustained response [1].

We report a case of an unusual association of HCV and PNH with subsequent poor response to Eculizumab and complicated course.

A 40-year-old Georgian man presented to the emergency department on July 24th, 2014 with acute onset of abdominal pain and jaundice. He denied any similar previous clinical episode but complained of chronic fatigue. Unemployed, his past medical history was insignificant and reported no alcohol abuse or illicit drugs. He was icteric, alert and with normal vital signs; the body temperature was 37.6°. On the physical exam, there was no sign of chronic liver disease. His abdomen was diffusely tender to palpation. The remainder of the physical examination was normal.

The patient received a transfusion of 2 units of red blood concentrates (RBC) and was transferred to the hematology department for continuing management in collaboration with our hepatology unit. The peripheral blood smear showed normal Leukocyte and anisocytosis with red blood cell agglutination. Direct Coombs test was negative. Paroxysmal Nocturnal Hemoglobinuria (PNH) was suggested as a diagnostic and a flow cytometric analysis was performed. Antisera against CD14, CD16, CD24 and CD55 were used, in combination with Fluorescent Aerolysin (FLAER). The results confirmed the presence of a type III PNH clone (Figure 1). The Bone marrow analysis showed hypercellularity without any other abnormalities, consistent with a classical PNH (Figure 2). Figure 2: A cellular marrow with erythroid hyperplasia of normal morphology and increased number of megakaryocytes without evidence of hematopathies

HPN short term evolution was characterized by 2 recurrent hemolytic episodes with subsequent transfusion. Eculizumab prescription was validated by the expert center and initiated with a dose of 600 mg two weeks after meningococcal vaccination. Hemolysis was controlled; the patient was discharged with a close follow-up in outpatient hepatology clinic. He continued Eculizumab every week thereafter for 3 weeks (600 mg) and then biweekly on maintenance (900 mg) along with antibiotic prophylaxis by Oracillin (2 MUI/d) as recommended [2].

Three weeks after discharge, transient elastography by Fibroscan was performed in the absence of hemolysis. Liver stiffness measurement was 5.4 KPa confirming no or mild fibrosis (F0F1). The multidisciplinary consultation meeting agreed not to prioritize antiviral treatment and decided to pursue an active surveillance. Fibroscan performed every 6 months thereafter showed no fibrosis progression. The patient adhered fully to Eculizumab which was well tolerated. No further symptoms or hemolysis have been noticed for two years.

On June 2016, HCV eradication for all genotype 3 patients was allowed regardless of liver fibrosis stage [3]. Patient treatment by direct-acting antivirals (DAA) combination was planned for September. However, In August 1st and after 50 Eculizumab infusions, the patient was hospitalized in the hepatology department for hemolysis breakthrough complicated by oliguric acute renal failure. He presented with profound jaundice, dark-colored urine and fatigue. He was well oriented, afebrile and with normal vital signs. Diuresis volume was 300 mL on the first day. Laboratory tests revealed regenerative hemolytic anemia (65 g/L) with 218 G/L of reticulocytes, neutropenia (0.66 G/L), normal level of platelets (151 G/l), low haptoglobin (<0.08 g/L) and elevated LDH (Nx6.4). The Bone marrow analysis confirmed hypercellularity without any other abnormalities. The Immunophenotypic analysis of peripheral blood has discarded other possible causes of cytopenias, such as myelodysplasia or leukemia. Renal function was altered with decreased creatinine clearance 30 ml/mn/1.73 m2. Serum creatine phosphokinase (CPK) was increased (Nx3). Liver tests showed hyperbilirubinemia (Nx15.5) and increased aminotransferases (Nx10). Serum albumin and international normalized ratio (INR) were within normal range. Inflammatory biological syndrome was negative. A primary work-up for infections etiologies was negative. Cryoglobulinemia could not be measured because of hemolysis. The abdomen ultrasound with Doppler showed no hepatosplenomegaly, no thrombosis and normal kidneys.

The patient was restarted on blood transfusions (4 units of phenotype-matched RBC) and vigorous intravenous hydration. The urine volume increased with fluid administration up to 1200 mL on the third day. One week later, hemoglobin increased to 101G/L, LDH decreased to Nx1.2, bilirubin decreased to Nx3 and creatinine clearance increased to 48 ml/mn/1.73 m2. We then decided to treat chronic hepatitis C with combination of daily sofosbuvir (400 mg) and daily daclatasvir (60 mg) for 12 weeks (A1) as recommended. However, co-administration of DAA with Eculizumab had not been studied yet and no drug interactions had been described to date, moreover, sofosbuvir had never been tested in hemolytic context. Hence, the patient was referred to the tertiary center where further analysis confirmed negative cryoglobulinemia but revealed positive Mycoplasma pneumonia IgM (1.424) consistent probably with the episode of breakthrough hemolysis. Gradually, liver cytolysis decreased to within the normal reference range and mycoplasma PCR and serologic results enhanced considerably.

HCV therapy was initiated after the 52nd Eculizumab infusion. The first month of DAA/Eculizumab co-administration was uneventful clinically and biologically but later the patient experienced deterioration of the clinical status with fatigue worsening, recurrent abdominal pain and hyper chromic urines. His physical exam was unremarkable. Laboratory tests revealed pancytopenia: hemoglobin 81G/L, platelets 107G/L and neutrophils 55 G/L, associated with a persistent but reduced intravascular hemolysis as demonstrated by the LDH level (Nx1.1), reticulocytosis (146G/L), raised unconjugated bilirubin (Nx5) and low haptoglobin (<0.08 g/l). No iron, folic acid or vitamin B12 depletion was found. Renal function was normal as well as aminotransferases. An extensive infectious workup was performed that was negative.

An assessment of complement activity showed CH50 <10% (<11 U/ml) confirming complement blockade [4]. Thus, Eculizumab was maintained for the same doses and intervals. In addition, according to DAA/Eculizumab interactions on Hep-druginteractions, we performed the lysosomal acid lipase activity assay showing no deficiency (0.71nmol/punch/h) and confirming no breakthrough therapy.

However, the patient remained transfusion dependant (2 units of RBC per month). A real-time PCR-based assay with a lower limit of detection of ≤15 IU/ml was used to monitor HCV RNA levels and was undetectable at week 2 and then every 2 weeks thereafter, at the end of treatment and 4 weeks later. SVR 12 was achieved too. 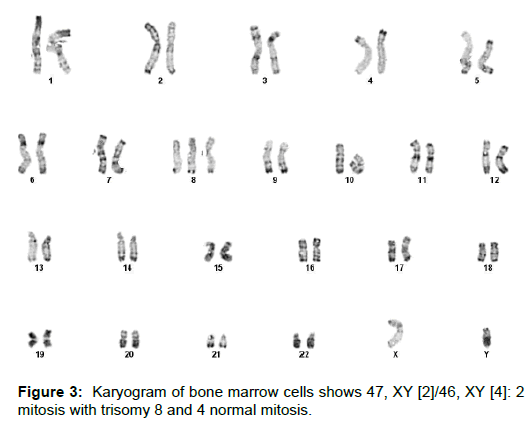 Chronic Hepatitis C had been substantially studied in patients with blood disorders but this is the first time where an association with Paroxysmal Nocturnal Hemoglobinuria is reported in a Caucasian male.

PNH is an acquired clonal disorder of hematopoietic stem cells in which the lack of glycosylphosphatidylinositol-anchored protein complement-regulatory proteins (CD55 and CD59) leads to intravascular hemolysis. Eculizumab is a humanized monoclonal antibody that binds to complement protein 5 (C5), thereby inhibiting the formation of the terminal components of the complement cascade. Eculizumab has demonstrated reduced hemolysis, more stable hemoglobin levels, lower transfusion requirements, and improved quality of life, as well as reduced frequency of thromboembolic events [5].

The management of HVC/PNH association was overall challenging especially since there were no previous published studies or experiences. HVC therapy was not initially prioritized because DAA were limited to F3 or F4 fibrosis patients by French health authorities at that time [6] moreover, benefits/risks discussion of Ribavirin regimen proned therapeutic abstention due to its hemolytic induced anemia.

Interestingly, the association of untreated HVC with PNH under Eculizumab was uneventfull for two years with particularly no hemolysis breakthrough. However the clinical course showed progression to complications: bicytopenia, pancytopenia and myelodysplastic syndrome. The patient did not achieve transfusion independence and experienced persistent recurrent abdominal pain crisis with significant quality-of-life impairment. Fortunately, no thromboembolic episodes occurred.

The incidence of such PNH complications under Eculizumab appeared to be similar to PNH natural history where the cumulative incidences of pancytopenia and Myelodysplastic syndrome were nearly 5 % by the second year after diagnosis [7].

Under this scenario, we hypothesize that HCV could have taken over PNH evolution so that it could not be controlled effectively by Eculizumab. It could have a link with hemolysis worsening, bone marrow failure increasing and poor response to Eculizumab. We may suggest that HCV might be a prognostic factor for the development of PNH complications.

The relationship between HCV and such hematological disorders is not a known extra-hepatic manifestation; the majority of available data concern HCV-related autoimmune and/or lymph proliferative disorders [8]. Nonetheless, mixed cryoglobulinemia (Type II) codevelopment in this patient pleads more for the potential VHC role in un-controlling PNH and leads to the suggestion that the underlying pathological mechanism may be immune-mediated. The Human Anti-Eculizumab IgG assessment was performed and it is still underway.

Our report would enrich the global PNH Registry. We suggest reconsidering the management of PNH patients with hepatitis C infection. Future basic and clinical research should provide a better insight on the implication of HCV infection in increasing PNH activity and possibly to find clues to overcome this issue.

We would like to thank Proff. Regis Peffault de la Tour for his comments and suggestions concerning the patient co-management and Dr. Sophie Iquel, Dr. Julien Decker, Dr. Thomas Guery for providing us with the figures.

The Authors whose names are listed above have co-managed the case. Si-Nafa Si-Ahmed and Amal Chakkor designed the report; collected the patient’s clinical data and analyzed it. Amal Chakkor wrote the paper.