Background: Hypertension is an important public health problem in Brazil, and has been affecting individuals of different ages and social strata.

Objective: To determine the prevalence of hypertension and its associated factors in Brazilian adult population.

Results: Hypertension increased with age in both sexes, and the men were more likely than women to have that disease in all age categories analyzed. Male sex, older age, not living with partner, low educational level, physically inactive, smoking, overweight, diabetes type 2 and high blood cholesterol were associated with hypertension.

Conclusion: These results reinforce the need for adoption and implementation of measures, based on strategies for prevention, treatment and control of hypertension, still present in expressive way in Brazil and different parts of the world.

It is estimated that CVD will become the leading cause of death and disability, globally, by 2020 [3]. The trend of increasing hypertension prevalence seems to prevail among developing countries. In Latin America, the prevalence of hypertension-given the broad diversity of the region-ranges from 13.4 to 45.5%, and this rates are likely to triple by 2030 [4-6].

In 2013 in Brazil, the study found that the prevalence of adults with high blood pressure was 22.8%, higher in men (25.8%; 95% CI: 24.8-26.7) than in women (20.0%; 95% 19.3-20.8%) [7]. According to the 2010 national census, of the 190 million people in Brazil (130 million adults), 160 million live in urban areas while 30 million live in rural areas [8]. Nowadays the Brazilian population is estimated to be of more than 202 million [9] and once rapid unplanned urbanization is one of the main factors that contribute to the development of hypertension and its complications, extensive and updated data about the prevalence of hypertension and its associated factors would be of urgent public health importance, especially due to an exponential increase in the CVD burden [1].

Thus, considering the complexity, multi-causality, and that the available data on hypertension in 2013 until then refer to the prevalence, and considering that the factors associated with the disease have not yet been adequately elucidated in this population, the deepening and understanding of these predictors constitute justification for this work. In this way, this study aimed to determine the prevalence of hypertension and its associated factors in Brazilian adult population.

This is a cross-sectional population-based study involving Brazilian adults aged 18 years and older. Data were obtained from the National Health Survey, a nationally representative household survey conducted by the Brazilian Institute of Geography and Statistics (IBGE) and Ministry of Health in 2013 [10]. A multistage sampling method was used to select a national representative sample of the Brazilian population. The primary sampling units were census tracts based on the 2010 census and randomly selected from the IBGE national master sampling plan. Within each census tract households were randomly selected from a national registry of addresses. Within selected households a randomly selected respondent aged 18 years or older was invited to take part in the survey.

Initially, 79,875 households were selected. Upon completion of data collection, the final sample size was 64,348 households with an overall response rate of 78%. Person-level survey weights were calculated taking into account the probability of selection as well as non-response rates. For the purpose of this study, the data of adults selected within each domicile to answer the individual interview and whose blood pressure was measured were analyzed. Thus, our sample consisted of 59.402 individuals.

In all of the analyses, the effects of complex sampling were considered. First, we described participant characteristics by weighted frequencies. Hypertension prevalence in the population was then calculated at a 95% confidence interval (CI). To identify factors related to hypertension prevalence, we calculated prevalence ratio (PR) using bivariate analysis and calculated the adjusted PR by a multiple regression of Poisson model with robust variance. In this model, all of the variables were analyzed simultaneously. We preferred to use this more conservative model that included all of the variables to allow for better confounding adjustment. Other models that included only the most significant variables were tested and did not change the significance of the variables. Associations were considered to be statistically significant when p<0.05. The STATA software version 13.0 was used for all of the calculations. 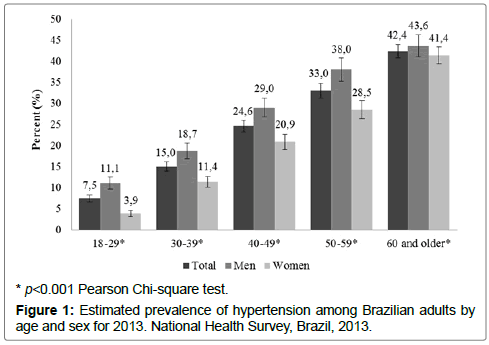 The prevalence of hypertension was significantly high (p<0.001) among individuals with bad (32.0%, 95% CI 29.06-35.01) or too bad (34.6%, 95% CI 28.93-40.79) self-perceived health status. Behavioral associated factors for self-reported hypertension such as being physically inactive was more likely to be identified among hypertensive patients (p<0.001). However, it was observable higher prevalence of high blood pressure among adults who reported selfperception of very low salt consumption. Cigarette smoking was significantly associated with hypertension in the bivariate analysis (Table 1).

Table 2: Multiple regression of Poisson to hypertension among Brazilian adults, according to sociodemographics, behavioral and comorbidities. National Health Survey, Brazil, 2013.

The prevalence of hypertension by the analyzed sociodemographic characteristics was higher among those aged ≥ 60 years, and among black adults, men, married or living as if married individuals, and among people with low educational levels. The prevalence of hypertension has increased with age in both sexes and was higher in men than in women at all ages. This difference increased with age. Since global prevalence of overweight is higher among women than men [19], we assessed the association between overweight and sex. Similarly, our study shows that overweight was more prevalent among women than men. Multivariate regression analysis also showed that diabetes type 2 and high blood cholesterol were significantly associated with hypertension. Overall, most of the present study’s findings align with several epidemiological studies that have revealed an association between hypertension sociodemographic, clinical, and lifestyle factors [18,20-22].

We also found a significant inverse linear relationship between self-perceived consumption of salt and hypertension prevalence rate in Brazil, but this relationship was not maintained in the final model. Still, draws attention the fact that traditionally, high salt intake has been identified as a risk factor for the occurrence of hypertension, and that the current guidelines [23,24] and several studies [25,26] are categorically recommend a low salt intake as a way to reduce blood pressure. It is worth noting that hypertension is considered a lifestyle disease, and the success of your treatment is directly related to accession lifestyle guidelines recommended by health professionals. In a study with 10.773 adults-designed to assess adherence to lifestyle recommendations by individuals who were aware of their hypertension-Kim and Kong noted that reducing salt intake was only slightly higher among those aware of their condition status [27- 29]. Thus, we believe that the inverse association similar between a associated factor of hypertension and its prevalence observed in our study suggests a change in the pattern of behavior motivated by diagnosis or awareness of the disease, in addition to knowledge of the implications of the lifestyle of hypertensive patients on the clinical manifestations of the disease. Thus, monitoring of the health service and the perception of hypertension appear to have led to a reduction in self-perceived daily salt consumption. Although previous studies have shown that better control of blood pressure reflects improvements in awareness of hypertension and lifestyle changes may be associated with newly diagnosed hypertensive patients, reductions of the entire population in daily salt consumption among hypertensive patients were not commonly reported in the literature.

Additionally, we verified that the self-perceived health despite having been significantly associated with hypertension in the bivariate analysis, this relationship also did not remain in the final explanatory model. As an independent predictor of mortality, poor self-perceived health status can lead to a lower engagement in preventive health practices and disease treatment [30]. In addition, changes in selfreported health can induce life-style changes which may have a delayed effect on health. Harrington and his colleagues found that the food quality is influenced by the core life behaviors and poor general state of self-perceived health is associated with poor-quality diet [31], which is contrary to the results observed when self-perceived consumption of salt. However, as this study looked at self-perceived consumption of salt intake, it may be that individual perception simply plays the medical discourse, not representing the total real consumption practiced by individuals.

Our study had limitations. For example, the cross-sectional design does not allow establishing cause and effect relationships, which makes it difficult to assess whether the factors identified as associated with hypertension are a consequence of preceded by the occurrence of the disease. Therefore, it is suggested to carry out studies with longitudinal drawings, in order to establish the temporal relationship among causal factors and the study outcome. In addition, it should be noted that although the procedures were standardized and the professionals trained, blood pressure measurement was performed using a digital automatic device, not traditional stethoscope [32,33]. Regarding self-reported morbidities, it is known that this method may result in an underestimation of the prevalence of injuries among individuals, however self-report morbidity remains one of the most widely used methods in clinical and public health research, and it has been found to be significantly associated with important outcome measures such as mortality, general health status, physical well-being, emotional well-being, among others [30,34].

Overall, hypertension is prevalent in about one-fifth of Brazilian adults, and being more predominant in men. The factors that presented a consistent association and greater chance of disease were: male sex, older age, not living with partner, low educational level, physically inactive, smoking, and overweight, diabetes type 2 and high blood cholesterol. These results reinforce the need for adoption and implementation of measures, based on strategies for prevention, treatment and control of hypertension in various sectors, which contribute to promotion and maintenance of healthy, lifestyles, as well reducing the burden of disease and complications, still present in expressive way, in Brazil and different parts of the world.

The National Health Survey was funded by the Ministry of Health (MS) and executed by Brazilian Institute of Geography and Statistics (IBGE). The author PM receives scholarship from Fundacao de Amparo à Pesquisa do Estado de Alagoas (FAPEAL).

The authors declare no conflicts of interest.