Inverted Meckels Diverticulum as the cause of Intussusception in Adults

The patient is an otherwise healthy 20-year-old female, who presented to the hospital after two days of cramp-like abdominal pain associated with nausea and vomiting. It consistently worsened over the period of one day, necessitating a visit to the emergency department (ED). Upon examination in the ED, she was nauseated and had dull, aching abdominal pain. The patient had mild tachycardia in the low 100s. There was mild and diffuse tenderness to palpation of the abdomen with no palpable mass appreciated. Initial laboratory values were significant for an elevated white blood cell count of 16,300/mcL. Abdominal and pelvic CT scans with intravenous contrast showed evidence of ileoileal intussusception and mesenteric adenitis (Figure 1, 2A, 2B). When it was clear that she was not improving, the plan was made for exploratory laparotomy, possible small bowel resection. Figure 1: Axial computed tomography cut of the abdomen and pelvis with intravenous contrast. 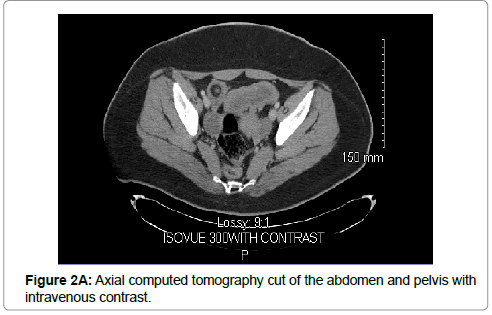 Figure 2a: Axial computed tomography cut of the abdomen and pelvis with intravenous contrast. Figure 2b: Coronal computed tomography cut of the abdomen and pelvis with intravenous contrast.

Risk, benefits, and complications of surgery were explained in detail to the patient and written consent was obtained. Procedure was done under general anesthesia. Midline abdominal incision was made and carried down to the fascial level with electrocautery. Upon entering the abdomen, the distal ileum was dilated and edematous. Loops of very friable thickened small bowel approximately 2 feet away from ileocecal valve was noted, highly suggestive of an intussusception (Figure 3A). This region of small bowel appeared to be very injected and ischemic in appearance. A point proximal to the dilated ileum was chosen as a resection point. A defect in the mesentery was made with a hemostat and the small bowel was transected with one firing of the GIATM stapler (Medtronic, Minneapolis, MN). An area of viable small bowel just distal to the distended loops was then chosen for the distal resection point and the bowel was transected in a similar fashion. The specimen was then removed by dividing the mesentery between clamps (Figure 3B). Once the specimen was passed off, the edges of the mesentery were checked for hemostasis. A stapled sideto- side, functional end-to-end stapled anastomosis was created. The small-bowel enterotomies were then closed with a single firing of the GIATM stapler in the perpendicular fashion and the staple lines were oversewn in a Lembert suture pattern with 2-0 Vicryl (Ethicon, Somerville, NJ) suture. The anastomosis was felt to be widely patent at the conclusion of the anastomosis. The abdomen was then copiously irrigated with 3 L of warm saline solution. The liver and spleen were palpated and no masses were appreciated. The fascia and skin were approximated. The patient was extubated and transferred to the PACU in a stable condition. Postoperatively, the patient was kept nothing by mouth. Her diet was advanced when she had flatulence on postoperative day 4. She was discharged home on postoperative day 6 without any complications. At 2 weeks follow up, staples were removed and the incision was clean, dry, and intact. At six weeks follow up, the patient was back to her normal activities. Figure 3b: Intraoperative photograph of resected segment of ileum. The specimen consisted of a resected rigid small bowel segment, measuring 40 cm in length, with a maximal diameter of 4 cm. Intussusception site is grossly identified and the starting point was about 5.5 cm from one resection margin

Gross pathological examination of the specimen showed a resected rigid small bowel segment, measuring 40 cm in length, with a maximal diameter of 4 cm. The Intussusception site was grossly identified and the starting point was about 5.5 cm from one resection margin. A bloody Meckel’s diverticulum was identified inside of the resected small bowel, which measured 31 cm in length with diameters ranging from 1.5-2.5 cm. The distal tip of the telescoping Meckel’s diverticulum had a blind end, with an infarcted mass measuring 3.3 cm in length and a maximal diameter of 1.5 cm. The microscopic pathological examination of sections through the telescoping Meckel’s diverticulum showed extensive hemorrhagic infarction. Sections through the mass lesion at the lead point of intussusception showed a lipomatous lesion with hemorrhagic infarction. Scattered benign glands were present, consistent with heterotopic gastric tissue. There was no evidence of malignancy.

In adults, intussusception is a rare cause of acute abdominal pain and bowel obstruction. Unlike pediatric intussusception, which is idiopathic in 90% of the cases, intussusception among adults is secondary to a lead point, arguably due to pathological abnormality in 70-90% of the cases [10]. Adult intussusception is shown to be caused secondary to processes such as lipoma, postoperative adhesions, Meckel’s diverticulum, inflammatory polyps, human immunodeficiency virus, endometriosis, Henoch-Sconlein purpura and primary or metastatic malignancy [9,11,12]. Transient adult intussusception is known to be present in patients with Crohn’s disease and Celiac disease as non-lead point intussusceptions [13,14]. Symptomatology of intussusception is predominantly abdominal pain with associated constitutional symptoms such as nausea, vomiting and gastrointestinal bleeding. Intussusception should be considered in the presence of small bowel obstruction. Intussusception creates internal prolapse of the proximal bowel, causing the mesentery to fold within the lumen of the adjacent distal bowel impairing peristalsis. This mechanism causes obstruction of the bowel contents and impairs the mesenteric blood supply to the affected segment, thus leading to ischemia of the bowel wall [9].

Our patient, with adult intussusception due to Meckel’s diverticulum, initially presented with vague abdominal symptoms leading to a wide array of differential diagnoses. Despite the rarer incidence of adult intussusception secondary to Meckel’s diverticulum, it is important to always include this diagnosis in the differentials while conducting the proper workup for associated conditions and malignancies. Due to the delayed presentation of the patient after the initial start of abdominal pain, ischemia of the bowel did not allow for initial reduction. Therefore, bowel resection with primary anastomosis was the only indicated surgical procedure. Without early intervention, this condition can result in high morbidity and mortality.