The knowledge of floral structure, floral biology and pollination behavior are pre-requisite for understanding the system and its manipulation for developing a proper crossing in which is largely lacking in small millets. The variability in floral structure and biology was studied in various finger millet genotypes. The inflorescence consisted of a cluster of variable number of spikes called fingers. Each finger has two opposite rows of spikelets. A spiklete contains variable number of florets. The florets are hermaphrodite, perfect except for the terminal florets. The floret is covered by two large glumes, enclosed between a pair of palea. The florets are in the axil of lemma. The androecium consists of three stamens. The gynoecium is bicarpellary, unilocular with superior ovary. Near the base of ovary two lodicules are present. There was a wide range of variation in the length of anther, filament, stigma and style. Anthesis occurred between 1.00 a.m. to 6.00 a.m., the peak period of anthesis being between 3.00 a.m. to 5.00 a.m. the pollen viability at the time of dehiscence of anthers ranged from 76.92 percent to 100 percent.

Finger millet (Eleusine coracana subsp.coracana)and its wild relatives are the member of Chloridoidea, one of the primary subfamilies of the grass (Poaceae) family. The cultivated E. coracanais a tetraploid species (2n=4x=36) derived from its wild ancestor E. coracana subsp [1]. Millets are the most important cereals of the semi-arid zones of the world. For millions of people in Africa and Asia they are staple crops. Among millet crops, finger millet figures prominently; it ranks fourth in importance after sorghum, pearl millet and foxtail millet. Finger millet cultivation is more widespread in terms of its geographical adaptation compared to other millets. It has the ability to withstand varied conditions of heat, drought, humidity and tropical weather.

Finger millet is predominantly a self-pollinated crop grown in southern Asia and eastern Africa, both for grain and forage [2]. It is the most important small millet in the tropics (12% of global millet area) and is cultivated in more than 25 countries in Africa (eastern and southern) and Asia (from near East to Far East), predominantly [3]. Its cultivation extends from sea level to higher elevations in the Himalayas. Finger millet is a good source of calcium (358 mg/100 g) and dietary fiber and consumed both in native and processed form [4,6]. Several health benefits such as hypo-cholestrolemic, hypoglycemic and anti-ulcerative are associated with regular intake of finger millet [4]. Finger millet grains can be stored for years without being infested by storage pest, which makes it a perfect food commodity for famine prone areas. The crops valued for assured crop harvest in low input agro-ecology.

Considering its importance in food and fodder security, there is a need for genetic enhancement of finger millet productivity from the current levels of 1.3 t ha-1 to 1.9 t ha-1. Continuous genetic improvement to mitigate dynamic production constraints driven by changing production environments, and to cater to ever changing preferences and requirements of the farmers and the end-users is necessary for adoption of a well-conceived strategy that hinges on the sound knowledge on the nature of genetic control of economic traits (among others) in the working germplasm. This genetic improvement can be made either by introduction, collection or crossing . To properly employ the crossing method one has to be clearly identified the floral structures of finger millet and emasculate well. The aim of this paper is to show clearly the structure of floral parts of finger millet and the process of hand emasculation.

Primarily the finger millet is grown in small pot that can capable of working easily on the laboratory table during 2014 at Debrezeit agricultural research center. To carry out the emasculation process we have to have the materials such as microscope, forceps and needle as shown in Figure 1. When the plant start to flower the potted plant has placed on the laboratory table and properly focuses under a microscope until we obtained a clear vision. Here hand emasculation is too difficult since finger millet is a small seeded plant care should be taken during the process to protect the lemma and palea from being damaged (Figure 1). The present investigation shown that the finger millet utricle has a thin membranous pericarp composed of several layers of collapsed cells which provides little protection from the environment. In contrast, pearl millet has a pericarp fused to the seed with only a thin testa. The testa layer of finger millet is unique among the cereal grains in its structure; it contained five layers. The surface is covered by a thin layer that auto fluoresces. The inner layers of the testa contain tannins while the outer layer contain s phenolic compounds which auto fluoresce. The cell wall of the endosperm undergo strong auto f1uorescence. The starchy endosperm contains mostly compound starch granules, but a few simple granules are present, especially in the peripheral area. The testa of finger millet adheres strongly to the aleurone layer, and the flour is generally produced by grinding the whole grain. The bisexual flowers (florets) being smaller in size render artificial hybridization a difficult process. Emasculation without injury to floral parts is difficult. Hence, contact method of crossing was adopted for obtaining crossed seeds. In this brief investigation of the floral parts of finger millet I have tried to identify the following floral structures. Each finger millet plant has several fingers (inflorescence), each finger has in turn a number of spikelets, each spikelet further contains five florets, and each floret has three anthers around the stigma when you observe under a microscope as illustrated in Figures 2a and 2b (Figure 2).

The florets are covered by two large barren leaves each being enclosed between a pair of scale known as palea. The florets are in the axial of the lower flowering glumes known as lemma, which has small appendage. Near the base of the ovary, two little scaly lodiclues are present [2]. The three stamens which I have seen here (Figures 3 and 4) having another 0.5 mm-0.8 mm long, not pediculate. The gynoecium is bi-carpellary, uni-locular with superior ovary having two styles with plumose stigma. The androecium almost surrounds the stigma, which ensured self-pollination. The filament is very short (0.48 mm-0.85 mm), while anthers are bigger than filaments [2] (Figure 5).

Figure 3: Floret within lemma and palea. 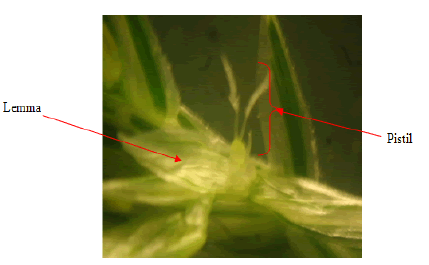 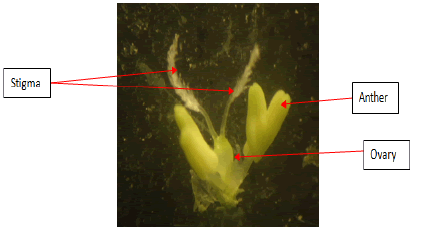 Figure 5: Anthers and pistil without lemma and palea.

Nevertheless, its productivity of the crop and also a pre- requisite to plan productivity is very low mainly due to lack of improved a meaningful breeding program. Effective breeding is the result of understanding and well-studied the pollination system in finger millet. Their study revealed that when stigma comes out of the lemma, it is covered with a thick cloud of pollen dust due to association of elongation of style and filaments with anthers bursting (Figure 6). This condition hardly allows any chance for cross pollination.

The anthers get dehisced while still being inside the palea. Soon after the dehiscence of anthers, the flower is observed to be closed with no traces of stigma. Only empty dehisced anthers are observed hanging out from the closed flowers at low humidity and high temperature. At high humidity and low temperature both anthers and stigma are observed hanging outside from the closed flowers. This phenomenon sequence predisposes finger millet into cleistogamous as well as chasmogamous species [2].

As it’s observed in the present study, within a spike, spikelet opens from top to downward while within a spikelet floret opens from bottom to top and one floret in a spikelet opens per day. The maximum number of flowers opens on the third day after initiation of flowering. It takes 5 days-7 days to complete flowering. The anthesis occurs between 1.00 a.m. to 5.00 a.m. As soon as lemma and palea begins to gap, the stigma and anthers emerge almost concurrently. The anthers dehiscence longitudinally and it occurs prior to the opening of the florets. The sticky stigma and anthers attained the same height inside the flower at the time of dehiscence. The anthers dehisce pollinate their own stigmas. The pollen remains viable for 20 min while receptivity of stigma is up to 5 h [2]. Therefore, estimation of natural crossing does not exceed 1% in finger millet. Inter-varietal hybridization using contact method is the simplest and easiest way. For The successful hybridization, genotypes having dominant character such as pigmentation on nodes have been used as male parent, which helps in the identification of true hybrids in the F1 generation [6].

Finger millets are highly self-pollinated and relatively low level of improvement in small millets appears to be the consequence because of difficulties in hand emasculation and hybridization. Hence, including male sterility is one of the ways for effective hybridization and enhancing out-crossing for improvement in these crops.

The author would like to thank McKnight foundation for financial support and Debrezeit Agricultural Research Center (DARC) to host the training.