Permanent export development is one of the most important national purposes ensue to economical field. The main concentration of future development of country depends on growing export, especially in some products that country has competitive advantage on them. Mazandaran province is being in strategic sphere base on both political and economic point and has its important role for permanent developing trend for country. With calculating RCA index is appeared that this province has obvious comparative advantage in both agriculture and industry. Products in agriculture and small industries not only can provide needs of this province people, but also can help people of the country, meanwhile can helps to fortify export fundamental. Exporting of these kinds of products have fluctuated since recent decades and did not follow fixed trend. This research has done base on identifying obstacles of non-oil export products in province with descriptive method. Statistical sample is 30 superior exporters of Mazandaran. Questionnaire has evaluated by Likert speculum and one sample T-test has used to recognize questionnaire. Results of this research show that we encounter to challenge against of exporting non-oil products. This challenge has identified 17 subheadings that we test three of them here.

Today developing non-oil export is one of the most important strategies for developing countries which regard economic growth programs for their selves. Based on theoretical subjects, growth of international trade has considerable role in trend of countries for developing; with regarding to deterioration of materials in international trade and being non-oil products as the only source for growing national production and increasing foreign exchange earnings, thereby regarding to non-oil export is national necessity.

Research sphere is investigate on non-oil export barriers in Mazandaran province and analyzing obstacles according to their priority, influence of export function for surmounting obstacles, exploring superior view point of relative organizations such as chamber of commerce, industries and mines, organization of commerce and exporters to identifying obstacles better and operate for overcoming them according to exploring priorities. This research tries to respond this main question that what are the main challenges about non-oil export in Mazandaran province? And how are the alternatives for quitting from this condition?

Challenges of non-oil export in Mazandaran province is the main variable in this research. For making measurements easy and thereby finding challenges and classification them this variable is divided into 3 special variables that those are: obeying fixed export policy, lack of bureaucracy and excessive formalities and awareness of market developments.

Iran is an important country according to trade and economy and from the past time had trade relation with neighbor’s countries. Iranian traders either before Islam or after that had reputation and transacted with China, India, Byzantine and Roma; so this trades due to long time had various type of happenings, sometimes for authority of government and domestic security be boosted or sometimes for rebel and civil commotion be debilitated [1].

Territory is included middle east, middle Asia and Caucasus that because of bipolar system collapse and existence of ample amount of hydro carbon has acute arena condition; also, international condition is appeared to be public where has not direct effect on relations, operations and activities though has indirect effect on it. Since 1931 that department of commerce has established and international trade has coped by government exclusively, different types of promotion has given to developing export till in 1939 to 1941 export rate was more than import about 200 million Rials; existence of different capacities for colleagues to developing markets and joint area ventures [2].

Goldstein and khan in an article investigated supply and demand function in 8 countries Belgium, France, Germany, Italy, Japan, England and United States of America during 1955-1970 with simultaneous equation system. Their research results have shown all price elasticity in export demand function (except Japan) has negative sign and income elasticity for all cases has positive sign. Also base on prediction has done export rate in all supply function is positive (except Japan) and statistically were significant [3].

Overall function of America export has significant and positive effect on beneficiaries and productive groups in America; in addition, necessity of knowing relation between governmental credits can help to step up export function of America, because this subject can have important effect on export [4].

Using IT and E commerce

Barriers due to non-oil export

There are a lot of controversies about obstacles of non-oil export and experts of economy have opined which mentioned. Payam Noor University will explain:

Low quality of export products and lack of permanent exposure

Lack of producer innovation for changing shape of products and lack of attention to design products suitable with wanted and interested of consumer.

Over price of some Iranian production

Disregarding to after sales service [6]

Instability of law, bureaucracy and regulation

Lack of competent experts for marketing and export

Non-oil export chronically has mentioned as one of the most important worries of every statesman and it has special consideration at first, second, third and fourth development policy of Iran. In this case there is some serious problem:

West restriction against Iran and possibility to step up them

Research methodology is surveying, indeed researcher descripts the variable. Descriptive methods define as methods that aim to descript condition with under investigate phenomenon. Initially, we wield basic methods for both total and abstract thesis and then we use basic knowledge about integrating systems [9].

In this research main lane for collecting data is authenticities and questionnaire which is explained below:

Total sample of ranking has shown in Table 1.

Reliability coefficient of research has calculated according to Cronbach’s Alpha in export trade market of Mazandaran province. For reliability of questionnaire in this research, introductory performance has done for 30% of samples and 0/74 has caught which means questionnaire has interior stability and monotonous.

For doing this research, there are different types of conceptual models which can be used for choosing evaluating index, in fact according to enquires one of the most complete models is exposed in 2008 by Mirza Hassan under the name of the book “export and import management” published by Payam Noor university that we used it for this research: Figure 1. 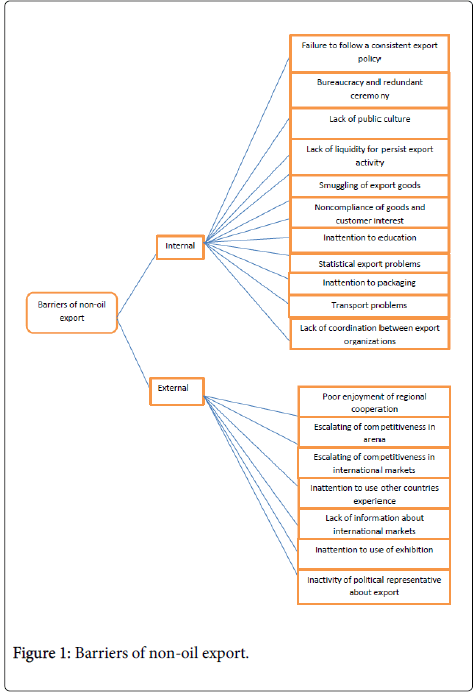 As the figure shows there are 17 variables in conceptual model that research has worked and investigate on 3 of interior variable of this. Analyzing of data will be shown below with explanations of them.

Hypothesis 1: Non-oil export is acceptable base on superior exporters of Mazandaran province (Table 2).

As table shows t has caught (-5.714) and it is more than t of table; so, significance even with the gauge of 99% (1 percent failure) is the possibility for accuracy, it means this kind of difference is not accidently. The concept of that is difference of non-oil export acceptance from Likert average is significant. Negative sign of average difference shows that real average is less than Likert average; indeed it can be mentioned that non-oil export has not good enough acceptance between exporters and it is one of the obstacles for superior exporter to export

As table shows t has caught (-2.829) and it is more than t of table; so, significance even with the gauge of 99% (1 percent failure) is the possibility for accuracy, it means this kind of difference is not accidently. The concept of that is difference of obeying fixed export policy from Li

kert average is significant. Negative sign of average difference shows that real average is less than Likert average; indeed it can be mentioned that obeying fixed export policy is one of the obstacles for superior exporter to export.

Hypothesis 3: There is adaptation of products quality with needs of consumption markets based on superior exporters of Mazandaran province (Table 6).

This research has done base on 3 hypothesis and according to statistical analysis has been done by SPSS software with using of T test method; it is appeared that average sum of caught data are less than moderate average. Analyzing data shows that these 3 factors from nonoil export obstacles are known as problems; thereby non-oil export in Mazandaran province has difficulties like some those mentioned here. This research has done by a main question and 3 hypotheses.

Based on research literacy and main question of research we can mention to 5 effective factors include policy, export culture, export economy, export diplomacy and macro thinking about export. First aim or question of this research was identifying main obstacle factors of non-oil export in Mazandaran and these 5 factors can be develop province when are performed and can be as challenge of development for province if are not performed.