The connection between livelihood transition and adaptive bamboo forest management was investigated in a village adjoining Salakpra Wildlife Sanctuary, Kanchaburi Province, where three species of bamboo-Dendrocalamus membranaceus, Bambusa bambos, and Thyrsostachys siamensis-were collected by villagers. From January to December 2014, 141,539 full culms (180,873 logs) of bamboo were harvested, generating a total income of 1,856,616 baht. Of the respondents surveyed, 46.4% had already stopped bamboo cutting, and 39.6% were retiring between 31 and 45 years of age. The main reasons for their retirement were changing to a new occupation (52.7%) and old age (31.9%). Today, only 14.8% of
respondents are still bamboo cutters, and their declining numbers mean that the bamboo forest in Salakpra Wildlife Sanctuary continues to degrade due to the area of bamboo forest and access to it being limited. In 2005, the local community established activities for forest conservation after they built a weir in Salakpra Wildlife Sanctuary. Specifically, new customary regulations and village-level bamboo forest demarcation was introduced to sustain production and services, particularly bamboo culms. The situation in Salakpra Wildlife Sanctuary and Thungna Village indicated that partial forest transition is occurring in at least, a village in Thailand.

This paper describes the situation of adaptive bamboo forest management in Salakpra Wildlife Sanctuary (SPWS), Thailand’s first wildlife sanctuary, established in 1965 in Kanchanaburi Province [1]. SPWS is situated on the eastern bank of the Mae Klong or Khwae Yai River (14o 09’ to 14o 40’ N and 99o 09’ to 99o 30’ E, Figure 1). SPWS is dominated by three forest types that occur in a landscape mosaic: Seasonal dry evergreen forest, deciduous dipterocarp forest, and mixed deciduous forest. About 60% of SPWS area (515.13km2) is mixed deciduous forest with much more bamboo in the lowlands [1]. Bamboo has a long history of intense exploitation in this area, and SPWS is an important source of bamboo for cutting. In 1977, SPWS was partially abrogated, creating an area of about 77.65km2 to be used for the Srinakarin dam-building project and preparation for resettlement [2]. This project directly affected SPWS because bamboo cutting was the main cash income of the reservoir refugees. The process of the development policy from the past to the present time has affected the local people’s livelihoods and bamboo forest utilization in SPWS. 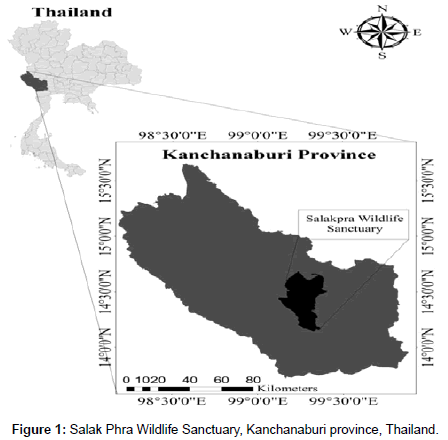 The study area is Thungna Village. It is the largest resettlement village in Nongped Sub-district, Srisawat District, Kanchaburi Province, and is located on the north side of SPWS. It consists of villagers from many small villages from the area flooded after completion of the Srinakarin Dam. Bamboo cutting was the main source of cash income for the villagers before they moved to the new area.

The study found that the main reasons for bamboo cutters to retire from bamboo cutting were that the person needed a new occupation (52.7%), old age (31.9%), fear of being captured (9.9%) and fear of wild elephants (9.9%). The reasons for former bamboo cutters changing to other occupations were stability of household (76.9%), higher income (67.0%), and safety from danger (58.6%). Therefore, the study indicated that bamboo cutters require stability and security in their lives and careers.

In SPWS, three species of bamboo were cut by the local people, namely, Bambusa bambos, Thyrsostachys siamensis and Dendrocalamus pendulas. Table 3 shows the sizes, lengths, trading names, and market prices of bamboo by species and utilization. These bamboo species have diverse sizes and market prices, all of which are based on market demand. The difference in species and sizes of bamboo lead to differences in utilization. A selective cutting method was used for bamboo harvesting. In the first step, the bamboo cutters select straight bamboo. A knife was use for bamboo cutting, the handle of which is used for measuring the lengths of bamboo. A saw was used to split the bamboo into the lengths required to fulfil market orders. Bamboo cutters count the number of bamboo culms to calculate the income. Bamboo cutters stop cutting bamboo if the income from bamboo cutting is sufficient for around two to three days of household expenses. In selective cutting, bamboo cutters leave about three to four culms per bamboo clump or all of the bamboo culms in the clump if the sizes and lengths are not suitable for the market orders.

Table 3: Size of bamboo for trading, market price and use by consumers.

The quantity of bamboo cutting from SPWS is shown in Table 4. The largest quantity of bamboo was cut in September. 29,416 culms were cut by bamboo cutters, most of this being Dendrocalamus membranaceu, which is a multipurpose bamboo for farmers in Thailand. However, “Pai Khaao Laam,” the first year (8-12 months) of Bambusa bambos, is the most popular kind of bamboo, because it fetches a high price. Only 30 to 40 culms are cut per day per trolley, from which the bamboo cutters obtain the equivalent sum of more than 150 culms of Dendrocalamus membranaceus. The cutting period for Pai Khaao Laam is around October to April. From May to September the bamboo cutters cut “Mai Sor” from Bambusa bambos. Mai Sor are used for bridge construction in the mangrove forest, orchard scaffolding, and for constructing shacks on mussel farms.

Table 4: The quantity of bamboo cutting from Salak Phra wildlife sanctuary in 2014. Agriculture was chosen as the main occupation for former bamboo cutters. Agriculture in this period complied with the development policy of Thailand, supporting monoculture, commercial agriculture and industries, based on The Fourth to the Sixth National Economic and Social Development Plans [12].

The third period of occupation change for the villagers was in the period 2000 to 2012. After the conflict between Khuean Srinagarindra National Park and people who encroached on the forest area (1998- 2000), access control by the Department of National Park Wildlife and Plant Conservation become stricter. Most of the bamboo cutters stopped bamboo cutting after that time. The main reasons why bamboo cutters stopped cutting bamboo were the decrease in bamboo forest after the bamboo forest area was declared a protected area, licenses for bamboo cutting and transportation were canceled by the Royal Forest Department (RFD), and some of the middlemen or traders in Kanchanaburi Province ceased to trade in bamboo.

Bamboo forests are managed according to a culm-selection method; the clumps have to be inventively worked on for proper distribution of new culms. Bamboo older than two years is suitable for construction use such as wave barriers against sea coast erosion. Only Bambusa bambos at age eight months to one year is suitable for cooking Khaao Laam i.e. sweet rice cooked with coconut milk in bamboo tubes. The method of bamboo harvesting in the past was selective cutting in all bamboo forest areas, but nowadays the bamboo cutters apply a selective cutting and felling cycle in SPWS due to the limitation of the bamboo forest area. The bamboo cutting areas are informally divided into sections depending on species and site, and a felling cycle is about one or two years. Only three species of bamboo were harvested by bamboo cutters, each species being grown at the same site. Orders from the markets affect the felling cycle, as different species are required at different times.

In addition, the research indicated that traditional knowledge and customary regulations were used for bamboo forest management namely; (1) Selective cutting must be used for bamboo culm harvesting, and only suitable sizes for sale should be harvested, (2) It is prohibited to harvest bamboo culms of an age of less than one year, and (3) Bamboo cutting is prohibited on important days. In 2005, the local community built a reservoir in SPWS. The head of village stated the importance of the surrounding forest, especially the bamboo cutting zone, for water supply, and this became the villagers’ main incentive for practicing conservation in SPWS. The regulations used before 1975 were once more returned to enforce strict practices and new regulations were created. Another reason for villagers to enforce strict regulations to control bamboo cutting is the shortage of bamboo for use in village activities and pressure by the SPWS office and patrols. This situation led the villagers to participate in community meetings to make the decision to enforce strict regulations on bamboo utilization combined with the restoration of forest conservation activities, namely, forest plantation, checking dams, and zoning of the conservation zone. The new regulations for bamboo forest management enforced from 2005 up to the present day are as follows.

• The harvesting of bamboo shoots is prohibited for commercial purposes but allowed for household consumption due to bamboo culms being more expensive than bamboo shoots when they are fully grown.

• Selective cutting must be used for bamboo culm harvesting, and only suitable sizes for sale can be harvested.

• It is prohibited to use cattle or vehicles for transporting the bamboo culms in the forest, and only trollies are allowed for transport.

• Timber cutting is prohibited. Anyone found cutting timber should be reported to the village head.

• Bamboo culm harvesting is prohibited in the conservation area, namely, Thung Salakpra and Thung Na Moon. The village head that not be a guarantor for trespassers. Adaptive bamboo forest management in SPWS, based on traditional knowledge, socio-economic and resource conditions, has changed to include limitations on the bamboo forest area. The shortage of bamboo culms and forest degradation led the bamboo cutters and members of the village to engage in regulation formulating activities and demarcation of the bamboo forest. The villagers created new regulations based on the traditional regulations and demarcated the bamboo forest based on perceptions concerning the value of SPWS. All of these are tools for the management of the bamboo forest area in SPWS and to protect SPWS from hunting and illegal logging. The purposes of informal regulations are (1) to sustain production of multiple goods and services, particularly bamboo culms, (2) to generate income for the villagers, and (3) to enhance livelihood security and the quality of life. The situation in Salakpra Wildlife Sanctuary and Thungna Village indicated that partial forest transition is occurring in at least, a village in Thailand.