Locoweeds, which are a common name for poisonous species of the genera Astragalus and Oxytropis, are toxic leguminous plants through a symbiotic association with the fungal endophyte Alternaria section Undifilum. The fungus produces an indolizidine alkaloid, swainsonine, which causes a toxicosis of grazing animals, named locoism. By what means stress from environment or genetics of locoweed endophytes affect fungal growth and synthesis of swainsonine as well as how fungal endophyte synthesize swainsonine in locoweeds, in addition to disruption of the toxic alkaloid swainsonine in locoweed plants, have not been well identified. To answer the above questions, further research is needed as locoweed plants are most palatable to grazing animals especially when locoweed plants are at flowering stage. This review outlines the present situation on locoweed plants in China, production of swainsonine, detection and interaction of locoweed endophytes as well as their transmission within locoweed plants .

Locoweeds are toxic legume plants of the genera Astragalus and Oxytropis [1,2], Fabaceae family, which live symbiotically with the fungal endosymbionts being part to Alternaria section Undifilum [3]. Locoweed toxicity is due to a mutualistic association with a locoweed fungal endophyte of Alternaria oxytropis that produce swainsonine (Figure 1) [4-6]. The classification of locoweed endophytes has passed through different changes where at first they were described as species of Alternaria [4], followed by species of Embellisia [7] and then, they were described as a new genus, Undifilum oxytropis , phylogenetically related to additional Pleosporaceae genera as Alternaria , Embellisia , and Ulocladium [5]. After that, morphological and phylogenetic data brought about the reclassification of these endophytes as Alternaria section Undifilum [6,8]. Locoweed endophytes colonize the plant hosts and are vertically transmitted by means of seeds [9]. The locoweed endophytes, classified as Alternaria oxytropis , are asexual and produce an alkaloid toxin, swainsonine [3,10], which is an agent of a neurological disease (locoism) after grazing animals consume the plants [1,7,11]. The fungal endophyte Alternaria section Undifilum produces an indolizidine alkaloid, swainsonine, which in the Golgi apparatus inhibits α-mannosidase and mannosidase II [12-16]. It was confirmed that as the concentration of swainsonine increases, the amount of endophytes also increases in locoweed plants and vice-versa [12,17]. 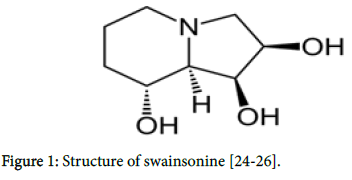 It is in eight locoweed species that the isolation of endophytes was made for determining the presence of swainsonine-producing fungal endophyte for main locoweed species in China, and they are distributed in different parts of China (Table 1 and Figure 2) [18,19], while worldwide, fungal endophytes were isolated in sixteen locoweed species (Table 2). According to phylogenetic analyses, the fungal morphology and also based on adequate ITS sequences, these endophytes were reported as Alternaria oxytropis [18,19]. Fungal endophytes known as Embellisia oxytropis have been also isolated from some species of locoweed, Oxytropis kansuensis [7] and Oxystropis glabra [20,21] that grow far and wide on western rangelands of China. The morphological along with biological characteristics of these endophytes are related to that of swainsonineproducing endophytes isolated from locoweeds [18]. 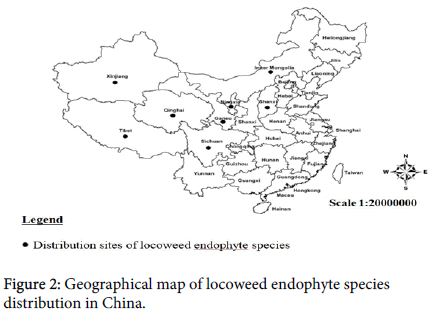 The locoweeds from North America, China, and in addition to Swainsona from Australia, were revealed to hold an endophyte, Alternaria section Undifilum that produces swainsonine [22,23]. All toxic plants that hold swainsonine have shown to have a swainsonine producing fungal endophyte, although not each plant in a population is toxic or contains the endophyte [22]. The entire locoweed plant parts contain endophytes, but they are highest in the crown (Figure 3) and they are hard to isolate from the roots. Amounts of endophyte alter seasonally in the upper parts of plants until the plants are mature [23]. 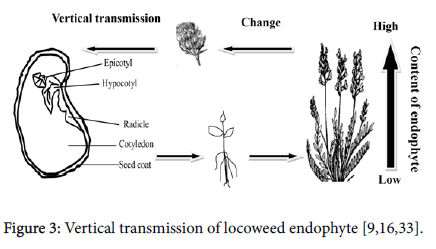 Transmission Paths of the Locoweed Endophytes

Grazing livestock and wildlife that consume Astragalus and Oxytropis plants get a neurologic toxicosis “locoism” distinguished by altered behaviour, weight loss, depression, decreased libido, infertility and abortion, as well as defects of birth along with death [14,24-28]. It was confirmed that the main path of locoweed endophyte transmission is through invaded seeds into the next generation throughout vertical transmission in locoweed plants [9,16]. As a result, the infection of new seedlings is thought to be at the stage of germination and the fungal endophytes move into all parts of the plant but are considered minor in roots [9,16,29]. When the seed coats are removed, the results showed that there is no detectable swainsonine in plants and hence the transmission of the endophyte through the vertical process can be blocked [30]. In a vertically transmitted process, locoweed endophytes are typically moved clonally and are transmitted by fungal hyphae. The mycelium of the fungus grows into the sheath, stem, leaf tissues, and lastly go in the flowering stem, seeds and then is through the seed that the endophyte is passed to the next generation of plants [31,32], and the propagation of locoweed fungal endophyte is closely linked with its seeds distribution [21,29]. However, locoweed endophytes have not been found in the root of field-collected plants [9,29].

In a number of locoweeds species in China, fungal endophytes are recognized to fit in the similar taxonomy species of fungus, except, given that these fungal endophytes are isolated in their respective hosts and vertically transmitted to the seeds of the next plant generation, it is likely that the endophytic fungus of the different species of locoweed have developed distinctive biological traits. According to [33-36], fungal endophytes are generally defined as species that exist inside the tissues of living plants for some of their whole life cycle. The plant entry of the fungal endophytes can be through root hairs or stomata in leaves and then disseminate systemically throughout the plant. Some fungal endophytes are capable of colonizing roots, aerial parts of plants, the vascular system, and seeds [37], and may support the growth of host plants, improve nutrient supply and protect plants from both biotic as well as abiotic stresses [38-40]. However, some endophytes are pathogenic to their host, while others interact as a commensally [41,42]. As reported by [29,43,44], locoweeds are toxic plants and their toxic component is an alkaloid, which can be divided into two classes: quinolizidine alkaloids and indolizidine alkaloids that are known as swainsonine and swainsonine N-oxide, and it is swainsonine alone that causes the symptoms of the locoweed endophyte poisoning [43].

It is thought that locoweed endophytes might play a role in the health and productivity of plants. Locoweed endophytes are a likely natural source of biological control agents against plant pathogens. Some fungal endophytes identified have been found to have a virtuous impact for health and productivity of plant by promoting plant growth and suppressing pathogens, for others the role is less clear [45-56]. Species of fungal endophyte depend on the plant host for nutrition, reproduction and guardianship from abiotic and biotic stress. Profits to the host plant for grass endophytes comprise tolerance to pathogens, enhanced competitive abilities, and resistance to insect herbivory in addition to animals [57].

The Interaction between Endophytic Fungi and Locoweed Plants

Interactions of fungal endophytes with locoweed plants offer the nutrients of endophytes, hormones and also a number of other signals in inducing their ability to produce swainsonine. Locoweed plants, as the host of the endophytes, have a straight influence on the swainsonine production [58]. Locoweed and fungal endophytes have likely been associated for a long time. First, locoweeds provide fungi the minerals and photosynthetic products, a fixed internal environment for its growth and reproduction and play a role in its spread through the seeds. The metabolites produced by endophytic fungi induce the development and growth of locoweeds, and improve the resistance of locoweed plants to the biotic stress along with abiotic stress, then produce toxic metabolite swainsonine for plants protection from the feeding of animals [10,56].

Locoweed plants are perennial legumes characterized by a hard seed coat that allows the seeds for living in rough conditions and stay viable for several years [59,60]. The endophyte Alternaria section Undifilum is a seed-borne fungus that passes between generations through the seed coats of locoweeds; plants grown from seeds lacking seed coats are endophyte-free, while plants grown from whole seeds comprise the endophyte and swainsonine [9]. By means of microscopy, culturing, as well as polymerase chain reaction (PCR), Alternaria oxytropis can be detected in locoweeds, and among them, PCR is the most sensitive [9,52,61]. In the amount of Alternaria section Undifilum , the difference was thought to be coupled with the highly variable concentrations of swainsonine in Astragalus and Oxytropis [12,17]. In the locoweed seeds, endophytes were detected inside the coat but not the embryo. The fungus can be cultured from seed and the endophytes could be maternally transmitted [9].

Fungal endophytes and their interactions with host plants 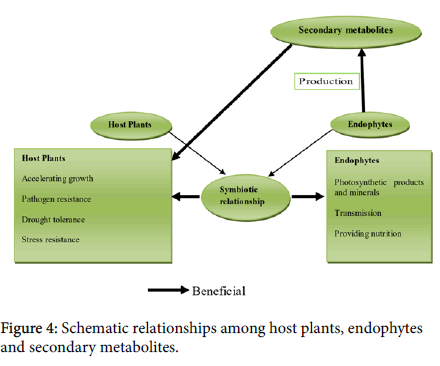 The majority of locoweed fungal endophytes show thread-like hyphae of 2–10 μm in diameter and reach up to various centimetres in length. The growth of hyphae at their tips and new hyphae are normally formed by the new emergence of tips along existing hyphae [3]. When hyphae come into contact, they fuse then this process is called hyphal fusion. Processes of these growths lead to the mycelium development, an interconnected network of hyphae [69].

Most of locoweed fungal endophytes produce conidia in culture [5,70]; conversely, the conidia have not been found in infected plants [71]. The fungus grows very slowly, less than 0.2 mm/day [5,10]. Conidia of locoweed endophytes produce germ tubes in process of germination. The shape of conidia produced from locoweed fungal endophytes is ellipsoid, with a small number of ovate spores, and produce a sole wavy hypha at the time of germination [5]. Most conidia have thin septa which are undifferentiated from conidial walls, a common characteristic in conidia of Embellisia species [5,70].

The pathogenic fungus Embellisia astragali [72], recently known as Altenaria gansuense [73], because of its molecular and morphological characteristics [5,70], is similar to locoweed endophytes Altenaria cinerea and Altenaria fulva. Their hosts belong to the genus Astragalus [70] and are found in similar tissues of its host where the fungus resides, within the seeds, stems and leaves. Furthermore, the growth of all these fungi on artificial media is slow. But, some differences exist in the features of conidia and conidiophores between locoweed endophytes and Embellisia astragali [73]. Embellisia astragali known at Altenaria gansuense is found in roots and is pathogenic to its host [4]. Altenaria section Embellisia is known based on a combination of aspects including predominantly transversely septate conidia with distinctly pigmented and thickened septa, variously swollen, curved or sigmoid conidia, umbilicate sites of conidium production at conidiophore geniculations and intrahyphal proliferating chlamydospores in culture [74,75].

Production of the alkaloid swainsonine

Fungi belonging to Alternaria section Undifilum found in locoweeds [14], an endophyte infecting Swainsona canescens [24,76], the insect pathogens Metarhizium anisopliae [77-79], the clover pathogen, Slafractonia leguminicola that previously was recognized as Rhizoctonia leguminicola [80,81] and a recently discovered fungus belonging to the order of Chaetothyriales found in morning glory are known to produce the alkaloid swainsonine [13,14,44]. Swainsonine may play a role in mutualistic symbiosis and plant diseases in addition to animal toxicoses. This indolizidine alkaloid is under consideration as a constituent of chemotherapeutic treatments for some cancers [82,83].

The variety of locoweed fungal endophytes that produce swainsonine suggests numerous ecological roles for the alkaloid among symbionts and parasites of plants as well as animals. Concerning toxic locoweed plants, livestock develops a preference in spite of the disturbing cytotoxic and neurological effects caused by the alkaloid swainsonine [14].

The toxicity of locoweed plants is due to endophytic fungi. Locoweed plants are resistant to cold temperatures, drought as well as to poor and saline soil conditions. For these reasons, locoweeds have a fine impact on the regeneration of rangelands with prevention of windstorms, sand fixation, soil conservation and moisture, enhancing the fertility of the soil and can fit the harsh environment of western China. Even though locoweed plants may have a beneficial impact on the ecosystem of rangeland, they cause poisoning and death to the grazing animals through the production of alkaloid swainsonine and in consequence, applies a great negative influence on the production of livestock and the income of herdsmen in western China. For this reason, additional research on locoweed plants, locoweed endophytes and swainsonine is needed as, although animals are poisoned by eating locoweeds, locoweed plants could have a great impact in the ecological communities, and thus, they should be considered as “better than nothing”.

This study was supported by the Agro-scientific Research in the Public Interest (201303057), the China Agriculture Research System (CARS-34), the Yunnan Province High-Tech Talents Introduction Project (2012HA012), the 111 Project (B12002) and the Fundamental Research Funds for the Central Universities (lzujbky-2017-k02).