Background: Noncompaction Cardiomyopathy (NCCM) is a primary genetic cardiomyopathy with variable clinical and Echocardiographic (echo) features. Association with Mitral Regurgitation (MR) was reported but the mechanism of this association has not been well described in pediatric patients. Aims: To describe clinical and echo features of MR in NCCM. Methods: All pediatric patients with NCCM associated with MR and preserved ventricle function seen in one center from January 2015 to March 2020 were included. Clinical and echo features were described. Results: Twelve patients were identified (66% females), 8 (66%) presented with heart failure due to severe MR , and 4 were asymptomatic with mild-moderate MR. Echo features in all patients showed Papillary Muscle Noncompaction (PMNC). The Papillary Muscle (PM) base was discontinuous with the endocardium in 5 patients (41%) and PM were not well differentiated from the noncompacted myocardium in 3 patients (25%)There were variable degrees of chordal elongation and malcoaptation of the leaflets in all patients. Five patients (41%) had associated congenital heart disease including ventricular septal defects in 4 and patent ductus arteriosus in one patient. Conclusion: PMNC causes MV chordal abnormalities that lead to malcoaptation of the mitral leaflets resulting in MR. NCCM needs to be considered when evaluating patients with MR.

NCCM is a Primary Genetic Cardiomyopathy (CMP) characterized by prominent myocardial trabeculations with deep intertrabecular recesses, readily identified by echocardiography (echo). It was initially described by histopathological studies in 1975 where it was referred to as “spongy myocardium” [1]. In 1984, the first echo features of NCCM were described as “myocardial sinusoids” [2] and the term NCCM was first used in 1990 by Chin et al [3]. Clinical features in children are heterogenous, some cases are asymptomatic, incidentally identified and others had severe heart failure and arrhythmias [4]. The disease has familial occurrence in up to 30% of cases, different genes have been identified and there is a wide overlap with other types of CMP [5].

In 2004, we described the first series of patients with NCCM associated MR and preserved myocardial function [6]. Subsequently, many other pediatric patients were reported by us describing the echo features which was characterized by PM affection [7,8].

In this report we report more pediatric cases with NCCM / MR and describe the echo features of PMNC which we believe is a unique mechanism for MR.

The study is retrospective and included all pediatric patients with NCCM associated with PM affection and MR seen from January 2015 to March 2020. The study protocol was approved by the hospital administration and ethics committee. Data on clinical and echo assessment (using Toshiba (Aplio) machine) were collected. Diagnosis of NCCM was based on the criteria of Jenni et al [9] using the following:

1. The appearance of a two-layer myocardium with multiple myocardial trabeculations and recesses.

2. The noncompacted to compacted layer thickness ratio measured from the parasternal short axis view during systole of >2:1.

MR was assessed using the American College of Cardiology Guidelines [10]. We did not exclude patients with congenital heart disease.

We identified 12 patients with PMNC. Clinical and echo features are shown in (Table 1).

Table 1: Clinical and Echo Features of 12 Patients with PMNC.

The age ranged between 2 months and 12 years. Females were 66%. Clinical presentations include heart failure in 8 patients (66%), and a heart murmur without symptoms in 4 patients (33%). Echo features in all patients showed NCCM involving PM base. The PM base was discontinuous with the endocardium in 5 patients (41%) (Figures 1). The PM were not well differentiated from the noncompacted myocardium in 3 patients (25%) (Figure 2) There were variable degrees of chordal elongation /rupture. The mitral leaflets appear malcoapting in all patients (n). The anterior leaflet was more affected leading to variable degrees of superior displacement of the leaflet tip and in one case it was flail. MR was severe in 6 patients (50%), moderate in 5 (41%) and mild in 1 patient. Ejection fraction was normal>55% in all 12 patients. Associated congenital heart disease were found in 5 patients (41%) including Ventricular Septal Defects (VSD) in 4 (2 of them had multiple VSDs) and patent ductus arteriosus in one patient. Figure 2: Parasternal short axis view of the left ventricle at the level of papillary muscle showing extensive NCVM with papillary muscles not clearly distinct from the noncompacted myocardium. 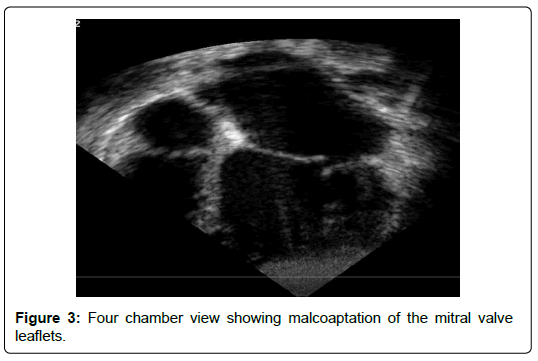 The mechanism of MR in NCCM can be related to mitral valve annular dilatation secondary to left ventricle dysfunction, however in patients with normal ejection fraction, the mechanism of MR is more likely to be related to PM affection, as shown in this case series. As has been observed by us and others, the PMNC leads to elongation/rupture of chordae resulting in variable degrees of leaflet malcoaptation [6,11]. Chordal rupture has been confirmed by intraoperative inspection where the PM base was found to be friable prohibiting MV repair [12].

Other authors observed the lack of coaptation of the MV in NCCM, however, the causal relation with PMNC has not been emphasized [13]. Coaptation abnormalities might be similar to MV prolapse, many authors in fact, described “mitral valve prolapse” association with NCCM [14,15]. On the other hand, there had been reports about the frequency of CMP in patients with MV prolapse in the absence of MR. Some patients in these series showed left ventricle dilatation or abnormal systolic or diastolic dysfunction [16]. 1n this latter report, the cases shown had trabeculated left ventricle myocardium, though this was not pointed out by the authors. We believe that in this subset of patients with “MV prolapse”, NCCM needs to be considered and ruled out as the MV abnormalities could mimic those seen in PMNC as both conditions can lead to chordal elongation/rupture.

The most compelling evidence of PMNC came from Badhwar who initially reported a case of NCCM with severe MR who underwent MV surgery and later had sustainable improvement of ejection fraction [17]. On intraoperative inspection, similar to our patients, the author found that the usual PM and their chordal continuity were absent and multiple PM-like structures, attached to the MV leaflets by thin chords were seen. According to the author, these findings could impact on surgical techniques such as PM repositioning or neo-chord reconstruction.

Cardiac magnetic resonance imaging has been helpful in delineating the PM affection in NCCM and showed that the total PM area in patients with NCCM was lower than controls [18].

As NCCM has a guarded prognosis due to later onset of heart failure, arrhythmias and thrombo-embolism, PM dysfunction related to NCCM should carefully be looked for when evaluating patients with MR in order to plan patient management and counselling.

We described a distinct entity: PMNC that has characteristic echo features leading to leaflet coaptation abnormalities. PMNC has important implications on patient management and prognosis.