Physiological and Biochemical Studies in Black Gram as Affected By Iron

The response of black gram (Vigna mungo L.) at different levels i.e. control (5.6 ppm), deficient (1.4 ppm) and toxic (56 ppm) of iron was investigated. Deficient and toxic levels of iron suppressed the growth of black gram seedlings as compared to control. A significant reduction was seen in radicle and plumule length, and biomass of plant at deficient level of iron as compared to toxic. The photosynthetic pigments were also found to be reduced at deficient level of iron than toxic and control. Iron deficiency and toxicity were associated with an increase in the activities of catalase and peroxidase. Both iron deficiency and toxicity decreased the concentration of DNA, RNA and protein contents in young seedlings of black gram. Iron deficiency proved to be more deleterious for black gram than iron toxicity.

Iron is third among all important micronutrients for plant growth [6,8]. It is involved in different biochemical processes like photorespiration, glycolate pathway and transport of energy in the plant [9]. It is an essential element for many enzymes, including cytochrome that is involved in electron transport chain, chlorophyll synthesis, involved in the structure of chloroplasts, and much enzyme activity [10-13]. Iron as an essential metal, its acquisition by plant roots from the soil enables its entry into the food chain. Therefore, in this way, essential nutrients reach to the animal and human diets.

Iron is involved in the formation of chloroplast protein hence due to deficiency of iron chloroplast protein is reduced and cell division stops, therefore, growth of leaves has been reported to be decreased [14,15]. Kumar and Soll in 2000 reported that iron is required in the active site of glutamyl-tRNA reductase, an enzyme needed for the formation of 5-Aminolevulinic acid which is a precursor of chlorophyll biosynthesis [16]. As iron is not trans located easily in the plant, the deficiency symptoms first appear in young leaves hence its deficiency causes chlorosis as reported in corn and sorghum. In flooding soils due to low redox potential large amounts of iron may be available for plant which could be toxic for the plants. Visual symptoms of iron toxicity include root flaccidity, reduced root branching and mottling of leaves [17,18]. Catalase and Peroxidase play a role in the protection against any type of environmental stress [19]. The levels of both the enzymes which belong to oxido-reductase group have been usually increased by catalyzing the reduction of H2O2 in preventing oxidative stress [20].

In present study, we have described the changes in growth, pigment content and activities of antioxidant enzymes (catalase and peroxidase) in response to deficient (1.4 ppm) and toxic (56 ppm) levels of zinc as compared to control (5.6 ppm) in the seedlings of black gram.

Na2MoO4; 0.1 μM CoSO4 and 0.1 μM NiSO4. The stock solutions of all nutrients were prepared with analytical reagent grade salts. Seeds were initially kept in dark and humid conditions for 48 hours. Seven days after the emergence, seedlings were subjected to different concentration of iron i.e. control (5.6 ppm), deficient (1.4 ppm), toxic (56 ppm). The seedlings were harvested after 14 days for the following studies.

The experiment was conducted in a Completely Randomized Design (CRD) with 3 replications. The data were analysed by one way ANOVA using software program Sigma stats 3.5. It was followed by comparison of mean values using Holm Sidak method.

Iron deficiency and toxicity has been reported in this plant species grown under laboratory conditions. The results observed are shown in Table 1. There is alteration in growth which is characterized by different parameters such as fresh and dry weight/biomass accumulation, shoot and root length. Snowden and Wheeler; Schmidt and Fühne; de la Guardia and Alcántara, 2002a have reported that at inadequate supply of Fe there is gradually growth depression showing reduction in shoot length and dry biomass [25,26,18]. In our results there is reduction in plumule length and radicle length which became more evident in deficient level, and it was 41.46% and 28.81% respectively (Table 1). During, Fe deficiency stress biomass allocation towards the roots might be explained by increased phosphoenolpyruvate carboxylase activity in roots [27]. Batty and Younger in 2003 reported that above a threshold Fe concentration in the medium there is reduction in growth due to toxic level of Fe. They observed changes in root growth of common reed. In the findings of Snowden and Wheeler (1993) root growth of most investigated dicotyledonous species was more susceptible than shoot growth [25].

The first visual sign of iron deficiency in young leaves is Chlorosis. Gogorcena and co-workers in 2001 have reported that during Fe deficiency chlorosis might be developed without having any effect on growth while Kosegarten; Gruber and Kosegarten have reported that depreciation in growth have been seen at the beginning of yellowing of leaves or without yellowing [29-31].

Suh and co-workers in 2002 reported that toxic level of Fe increases cytochrome b6/f complex, a photosynthetic component of photosystem II (PSII) in thylakoids [32].

It has been studied that excessive dissipation of light might cause photo inhibitory damage [33-36].

In our study toxic level of Fe resulted in increase in pigment concentration than deficient level (figure 1). Similar results were observed by Kampfenkel and co-workers (1995) in root cutting of Nicotiana plumbaginifolia plants.

Figure 1: Effect of iron on chlorophyll a, chlorophyll b and total chlorophyll content in mg/g fresh weight of black gram seedlings in response to different concentration[control=5.6ppm, Fe(-)=1.4ppm,Fe(+)=56ppm].

They also gave evidences for photo inhibition. Suh and co-workers (2002) also supported this photo inhibition in pea. A high chl. a/chl. b ratio was observed in our experiment which indicated reduction in size of antenna related to reaction centre[28].

In the present study, two indicators of oxidative stress i.e. catalase and peroxidase were examined in the 14 days old seedlings of black gram. Fe deficiency impaired the electron transport chain both in the chloroplast and mitochondrion which resulted in the formation of Reactive Oxygen Species (ROS) leading to the induction of oxidative stress [37]. Mittler (2002) reported that against ROS formation plants use a series of antioxidant molecules represented by non-enzymatic antioxidant activity [38].

Catalase is a tetrameric iron (heme) containing enzyme which rapidly degrades H2O2 and exerts a dual function at low concentrations. It acts peroxidatically and shows catalytic function at high concentrations [39]. It has been proposed that catalase may be uniquely suited to regulate the homeostasis of H2O2 in the cell. In the present study catalase activity was increased at deficient and toxic level as compared to control (figure 2A). Baskaran and co-workers in 2009 found similar results in Vigna radiate [40]. As cells are in stress both at deficient and toxic level due to catabolic processes rapidly generating H2O2 which was degraded by catalase in an energy efficient manner. Peroxidase (POD) enzyme is involved in reducing H2O2 to H2O. In the present study, our results showed that there was increase in POD activity which was explained by the fact that POD contains Fe (figure 2B). Increased peroxidase activity is directly correlated to the Fe content of the plant. Fang and Kao in 2000 also reported that there was an increase in peroxidase activity in leaves of rice. De Santiago recorded almost 1.5 times increase in peroxidase activity in wheat [41].

Figure 2: Effect of iron on (A) activity of catalase in EU/mg protein and (B) peroxidase activity in Δ OD/mg protein of black gram seedlings in response to different concentrations [control=5.6ppm, Fe(-) =1.4ppm, Fe (+)=56ppm].

The nucleic acid contents were decreased at deficient and toxic level as compared to control (figure 3). Measurement of nucleic acid (DNA, RNA) contents has been showed the level of oxidative stress. One of the mechanisms of decrease in nucleic acid content involves the OH- radical, which is known to cause strand breakage, deoxyribose fragmentation, and extensive base modification [42]. In the present study black gram seedlings were subjected to iron treatment (56 ppm), showed reduction in the level of protein (figure 4). There was significant decrease at the toxic level of iron as compared to control. Similar results were observed by Kumar and coworkers in 2015 in Vigna mungo. According to Tripathi and Gautam in 2007 there was reduction in protein content which might be due to increased rate of denaturation of protein. Slatni and co-worker in 2011 reported in that breakdown of existing protein into amino acid is the main cause of decrease in protein content in bean. 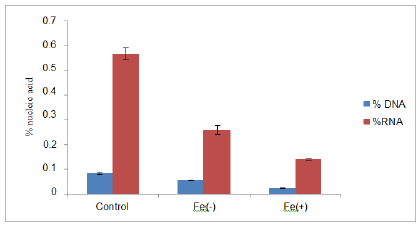 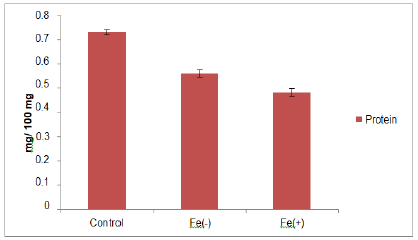 When plants are not supplied with an optimum amount of Fe, reduction in growth and many physiological and biochemical changes were observed depending on the deficient and toxic levels. Chlorophyll concentration is also very sensitive to Fe supply as iron plays an indispensable role in photosynthetic pigments. A decrease in photosynthetic pigments under Fe deficiency has followed the same trend as growth depreciation. The impact of Fe deficiency on photosynthetic pigments mainly impairs electron transport chain both in mitochondria and chloroplasts leading to the formation of Reactive Oxygen Species (ROS). Though Fe is essential yet excess level of Fe is toxic results in the induction of oxidative stress in plant cells. Catalase and peroxidase activity was increased in both the treatments as compared to control. In the present study significant changes have been observed to understand the role of Fe in healthy or stressed condition, to quantify the antioxidants of plants and scope of ameliorating them by providing additional supply of essential nutrients may be worked out for better plant growth.