Background: There is no single noninvasive index that can directly assess diastolic function. Untwist, contributes to diastolic suction, early filling. Speckle tracking imaging (STI), can be used to study the relation between diastolic indices and untwist in patients with diastolic dysfunction.

Patients and methods: 75 patients with diastolic dysfunction and 25 normal volunteers were selected for this study. According to mitral flow pattern they were classified into Group I (abnormal relaxation), Group II (pseudo-normalized) and group III (stiffness pattern) Using STI, the basal and apical short axis views were imaged. Stored data were processed to get apical and basal rotation, systolic twist, peak systolic twist ratio, diastolic untwist ratio and time to peak twist and untwist ratio.

The physiological hallmarks of LV diastolic dysfunction are impaired relaxation, loss of restoring forces, reduced diastolic compliance, and elevated LV filling pressure. Left ventricular diastolic dysfunction in clinical practice is generally diagnosed by imaging and there is no single noninvasive index that provides a direct measure of relaxation, restoring forces, compliance, or LV filling pressure [1]. However, by using a combination of different [2].

In clinical practice to identify and stratify patients with LV diastolic dysfunction, echocardiographic assessment of LV filling using pulsed- Doppler flow velocity of the LV inflow in conjunction with pulmonary venous flow and mitral annulus velocity measurements using Doppler tissue imaging (DTI) have been used [3,4]. However, all these indices are load-dependent, measuring events that occur after mitral valve opening (MVO), thus provide little information on the relaxation process that predominantly occurs prior to MVO, and evaluating only the later stages of LV relaxation [5]. That is why a novel non-invasive method for assessing the earlier stages of LV diastole, (relaxation and restoring forces) need to be developed [6].

Considerable additional work is needed to fully define all aspects of LV twist and untwist mechanics and to determine its role in the assessment of normal and diseased heart [7] speckle tracking imaging, a relatively recent modality, enabled rapid assessment of LV twist and untwist mechanics, which have expanded our understanding of both normal ventricular physiology, adaptation, and decompensated function in key disease states

Aim of the Work

Assessment of the relation-ship between indices of early diastolic function and untwist in patients with diastolic dysfunction.

From the apical 4 chamber view with the electrocardiogram connected to the patient, the time interval between the onset of the QRS on the electrocardiogram to the aortic and mitral valve opening and closure, were measured using pulsed wave Doppler from the LV outflow and inflow, respectively.

Speckle tracking imaging (STI), module was used for assessment of left ventricular rotational mechanics through scanning and recording from left para-sternal short axis view of both basal and apical shortaxis planes to quantify basal and apical LV rotations using the same machine and probe with a probe frequency range 1.7-2.0 MHz at a high frame rate (range 80-115 frame/s). The basal level was marked as the plane showing the tips of mitral valve leaflets at its center with full-thickness myocardium surrounding the mitral valve. Then the transducer was positioned one or two inter-costal spaces more caudal and slightly lateral from the basal site to be perpendicular to the apical imaging plane [9]. The apical level was defined just proximal to the level of LV apical luminal obliteration at the end-systole. The cross-section must be as circular as possible. We have to pay a careful attention to ensure that full thickness of myocardium is imaged throughout the cardiac cycle. Three consecutive cardiac cycles were digitally saved in a cine-loop format for later offline analysis [10]. Offline analyses was done by an independent echo-cardiographer who was not involved in the image acquisition.

To analyze twist and untwist parameters, from the basal and apical short axis, data set with a well defined endo-cardial border and the regions of interest were adjusted to include all myocardial thickness without including the pericardium. The endocardial borders of both basal and short axis planes were manually traced and subsequently tracked by the software. If poor tracking quality was observed the region of interest was readjusted until acceptable tracking was obtained otherwise the segment with poor tracking was discarded and replaced by another one. After processing, curves of basal and apical LV rotation, twist, twist rate and untwist rate were automatically generated by the software. (Excel; Microsoft Corporation, Redmond, WA) twist was calculated as apical rotation relative to the basal rotation with counterclockwise rotation as viewed from LV apex expressed as positive value and clockwise rotation as a negative value. Peak LV twist, peak LV twist rate (as first positive peak after R wave on ECG), and peak LV untwist rate (as the first negative peak after aortic valve closure) were recorded. Cardiac cycle length was measured as R-R interval. Time to peak twist rate was measured as time from R wave to peak twist rate and time to peak untwist rate was measured as time from R wave to peak untwist rate.

This study included 75 patients proved to have diastolic dysfunction by Doppler mitral flow pattern and 25 normal volunteers. 33.3% of patients were males and 66.7% were females with mean age of 50.83 ± 9.27 years compared to 24% were males and 76% were females with a mean age of 49.29 ± 11.77 years of normal controls. With no significant difference between patients and controls as regard to Sex and age (P ≥ 0.05). The prevalence of risk factors (especially hypertension and diabetes) was higher among included patients (P ≤ 0.001). There was non-significant difference as regard to conventional echo-cardio-graphic parameters (LVIDd, LVIDs, EDV, ESV. and EF) except for a highly significantly higher the left atrial diameter between patients and control (Table 1). 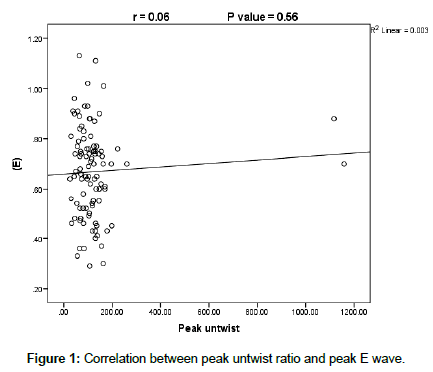 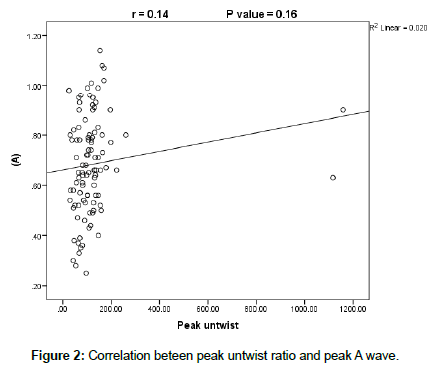 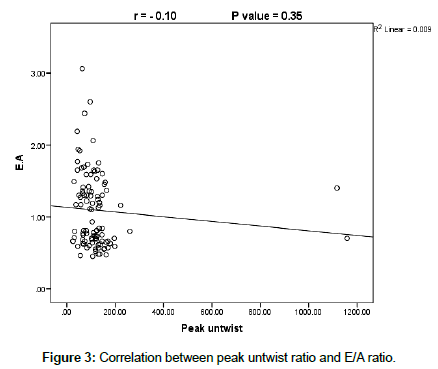 These findings can be explained as follow. Twisting and untwisting of the left ventricle are important aspects of the cardiac mechanics and function. In a normal heart, the onset of myofiber shortening occurs earlier in the endocardium than the epicardium [14]. During pre-election, subendocardial shortening and subepicardial stretch contribute to a brief clockwise rotation of the LV apex and counterclockwise rotation of the base [14,15]. During ejection, the activation and contraction of the sub-epicardial layer with larger radius of arm of momentum produces higher torque to dominate the direction of rotation, resulting in counterclockwise of the apex and clockwise rotation the base leading to ventricular twisting. Twisting and shearing of the sub-endocardial fibers deform the matrix and result in storage of potential energy in the deformed intracellular giant protein titin filaments and in the extracellular collagen fibers to be converted into kinetic energy (restoring force) with the start of relaxation leading to recoil and untwist in early diastole [16]. In the majority of patients with diastolic dysfunction the subendocardial layer suffers first and becomes affected earlier leading to a decrease in its counterbalancing effect and the subepicardial domination of rotation becomes more prominent with increased both twist and untwist. With disease progression the sub-epicardial layer becomes affected leading to decrease of its domination with progressive decrease of both twist and untwist [17].

The absence of correlation between untwist ratio and both mitral inflow and Doppler tissue derived diastolic parameters can be explained as follow, first: all these indices are load-dependent, measuring events that occur after mitral valve opening (MVO), thus provide little information on the relaxation process that predominantly occurs prior to MVO and evaluating only the later stages of LV relaxation [5] However, untwisting starts in late systole before aortic valve closure and nearly 50% to 70% of LV untwisting occurs within the period of isovolumic relaxation before mitral valve opening, while the rest is completed during early diastolic filling phase [7] leading to time disassociation between the two events. Second: relaxation and stiffness are the major determinant of mitral flow pattern but relaxation is not the sole determinant of untwist where untwist is controlled mainly by the interaction between relaxation and restoring forces and finally, untwist ends in early diastole and before the effect of stiffness. Left ventricular untwisting rate has been associated with early diastolic load and restoring forces but not LV stiffness [19,20]. It becomes clear that the factors controlling mitral flow pattern are not the same that control untwist ratio in addition to different timing of both events. These facts can explain the lack of correlation between both parameters.

Untwist may add a new dimension to the noninvasive assessment of diastolic dysfunction. It actually reflects the mechanical aspect of global diastolic function especially the early phase of diastole responsible for creation of suction to assure efficient early filling. Twist and untwist are a strong bridge between systole and diastole.

The sample size especially Group III was smaller (10 patients). Heterogeneity of the underlying cause of diastolic dysfunction. Inspite of paying greater attention to locate the exact apical and basal planes variability may occur between patients and this may affect values of rotations from patient to patient. Apical; and basal plane imaging does not occur in the same cardiac cycle. Lastly out of plane motions especially at basal plane may be a problem. Thus 3D STE may solve some of these limitations.

I would like to thank professor said shalaby professor of cardiology, cardiology department faculty of medicine Menoufia University, for his great help and continuous education and unlimited effort.