Background: Studies have shown that regular exercise reduces both the burden of diabetes and the risk of death from cardiovascular disease. The determinants of an active lifestyle are not fully understood.

Objective: The hypothesis of the current study is that athletic participation in high school (HS) would confer health benefits in adulthood in the form of greater fitness and less metabolic risk.

Methods: 372 consecutive outpatients referred for exercise testing were asked to complete a questionnaire that included number of years of HS interscholastic sports participation, smoking status, presence of diabetes, total number of medications taken per day, level of education, amount of exercise they engaged in per week and attendance at a US or foreign HS. Waist circumference, blood pressure, (BP) and body mass index, (BMI) were measured. The Standard Bruce Protocol was utilized to obtain total exercise time and METs.

Conclusion: Our study demonstrates that participation in HS athletics is associated with improved adult lifestyle habits and cardiovascular fitness. Further study is needed to confirm the findings.

Studies have shown that regular exercise reduces the risk of death from cardiovascular disease as well as reducing the incidence of obesity, Type 2 diabetes and metabolic syndrome [1-4]. Lack of physical exercise also leads directly to another serious but oftenneglected risk factor: poor cardiorespiratory fitness (CRF). Greater CRF has consistently been shown to be associated with lower all-cause and cardiovascular mortality [5-7]. Only about 20% of adults and one third of children meet recommended targets for physical exercise. The alarming increase in childhood obesity has raised awareness that the patterns of adult behaviors are formed much earlier in life. Obese children and adolescents suffer from decreased cardiorespiratory fitness and are at risk for adverse metabolic parameters including increased blood lipids, glucose intolerance and elevated blood pressure. Most importantly, as adults, they face an increased risk of premature morbidity and mortality. Understanding the behaviors that lead some individuals to remain fit and active is a first step in creating more informed and effective policy interventions for all age groups. The hypothesis of the current study is that participation in interscholastic high school (HS) athletics would confer health benefits in adulthood in the form of greater fitness and less metabolic risk.

The institutional review board at Holy Name Medical Center approved the trial and all patients provided written informed consent. English and Spanish language consents were available.

Consecutive out patients ≥18 years old who were referred for medically indicated exercise stress electrocardiography were included in the study. Exclusion criteria included patients who were unable to complete at least 3 minutes of the standard Bruce protocol, had uninterpretable electrocardiogram or who had resting systolic blood pressure, (BP) >160 or resting diastolic BP >100. No deviation from the standard Bruce Protocol was permitted.

Prior to stress testing, patients were asked to complete a questionnaire. This included the following: Age, sex, country in which they attended HS, whether they participated in interscholastic athletics, and, if so, for how many of the four years. Other questions included: Maximum level of education, do they continue to engage in sports or exercise on a regular basis and for how many hours per week. Other questions related to whether they were current smokers, if they have been diagnosed or treated for diabetes. Finally, they were queried on the total number of medications taken per day.

In addition, the following measurements were obtained

Body weight and height (from which, body mass index (BMI) was derived), seated BP after five minutes of rest and waist circumference. The exercise test was conducted by a physician or nurse practitioner who was blinded to the responses made on the questionnaire.

A total of 372 subjects volunteered to participate in the study. Table 1 shows the demographic data of the subjects divided into years of HS athletic participation, (0-4 years). We found a positive correlation between athletic participation in HS and total treadmill exercise time during the Bruce Protocol, (Figure 1), (454 ± 120 sec) (no sports) vs. 526 ± 122 sec (4 years of HS sports) (p<0.001) and METs (Figure 2) (9.9 ± 2.37 vs. 11.11 ± 2.36 p<0.001). Participation in HS sports was also associated with higher reported weekly exercise time, (Figure 3) (1.99 hrs. ± 2.93 vs. 3.56 ± 3.97 p<0.001). Women were significantly less likely to have participated in HS sports, (among those reporting no HS sports participation, and 64% were women). If males perform better during the exercise test than females, then it is possible that much of the increase in exercise time could be due to gender differences instead of high school athletic participation directly. Therefore, multiple linear regressions to control for sex were carried out. An additional year of high school athletic participation was still statistically significantly associated with increased treadmill exercise time (11.235 ± 3.889 seconds, p=0.004), METS (0.161 ± 0.075, p=0.032), and hours of weekly exercise. (0.356 ± 0.108, p=0.001). We could not find any association among HS sports and diabetes, smoking, waist circumference, total medications taken, domestic or foreign HS, BMI or BP. 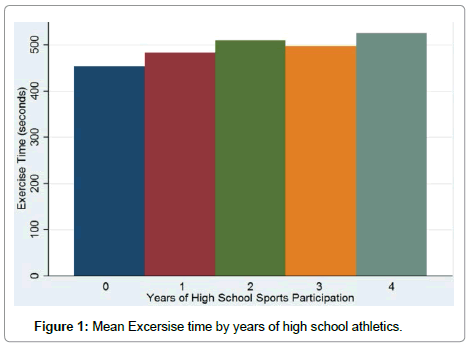 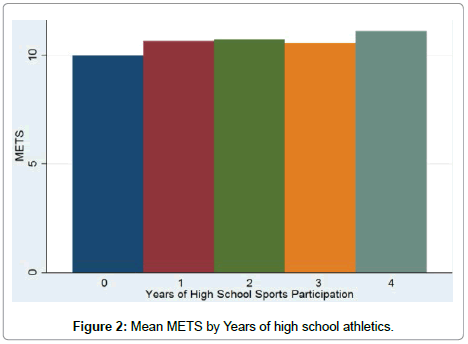 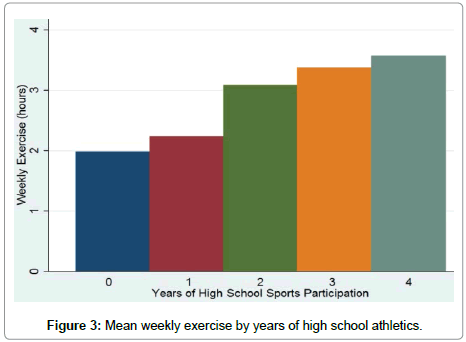 Today, it is estimated that one third of children are obese and will spend 7.5 hours in front of a screen. Only about one third will engage in the minimum amount of recommended exercise time. While alarming, concern about the lack of exercise among our youth is not new. In December 1953 an article “Muscular Fitness and Health,” coauthored by Dr. Hans Kraus and Bonnie Prudden was published that sounded an alarm about the poor state of youth fitness in America [8]. After other studies confirmed these findings, President Eisenhower established the President’s Council on Youth Fitness in 1957. In 1961, President Kennedy continued to expand the program with an emphasis on incorporating vigorous daily exercise into school curriculum. This program has continued and today is known as President’s Council on Fitness, Sports & Nutrition with recommendations for diet and physical activity for both children and adults. In an effort to promote greater adult CRF the Centers for Disease Control and Prevention issued guidelines for physical activity that include 150 minutes per week of moderate intensity exercise or 75 minutes per week of vigorous intensity exercise [9]. A joint task force by the American College of Cardiology and the American Heart association made similar recommendations [10]. Despite such recommendations, sedentary behavior has increased in children and adults.

Obesity and its attendant chronic illnesses are an ever-growing burden on individuals and our healthcare resources. Obesity has doubled among adults since the 1970s. Renewed focus on preventing childhood obesity has been seen as critical in stemming this trend. Obesity, once acquired in childhood often persists into adulthood [11]. Obese children and adolescents are at risk for immediate health consequences including elevated lipids and blood pressure as well as abnormal glucose tolerance. In addition, these children may be the Targets of discrimination and often suffer from low self-esteem. Longer term, they are at increased risk of premature adult morbidity and mortality. Understanding the behaviors that lead some individuals to remain fit and active is a first step in creating more informed and effective policy interventions for all age groups.

Studies have shown that regular exercise reduces the incidence of obesity and Type 2 diabetes and metabolic syndrome, (MS), defined as abdominal obesity along with abnormal lipid metabolism, glucose intolerance and elevated blood pressure is also strongly associated with a sedentary lifestyle. Laaksonen et al in a prospective study, showed that leisure-time physical activity of moderate or vigorous nature, decreased risk of MS by up to nearly two thirds in a population based cohort of middle-aged men [12].

We could not find any association among HS sports and diabetes, waist circumference or BMI. The lack of correlation is consistent with a longitudinal study by Lefevre, et al that reported that participation in youth sports was not associated with levels of vascular risk factors in adult men after 27 years of follow up [13]. Similarly, Twisk et al in an observational longitudinal study over 20 years, did not find a relationship between physical fitness during adolescence and cardiovascular risk profile at age 32 [14]. Yang et al, on the other hand, in a longitudinal study over 21 years did find that intense participation in youth sports over 3 years was inversely and significantly associated with metabolic syndrome in adulthood [15]. Exercise is only one component of the recommended healthy lifestyle. Diet choices play a major role in determining body composition and lipid sub fractions. Consumption of high fat foods and sugar-sweetened beverages was found to unaffected by sports participation in a study by Vella et al. [16]. Efforts to change behavior towards healthier food choices and increased physical exercise in both children and adults must continue if we are to impact the enormous individual and societal burden of obesity, type 2 diabetes and cardiovascular disease.

A sedentary lifestyle also leads directly to another serious but often-neglected risk factor: Poor CRF. Long recognized to be one of the most powerful markers of cardiovascular health, it is not currently considered when assessing a patient’s overall cardiovascular risk profile. CRF is traditionally measured via oxygen uptake and its utilization during maximal intensity exercise, (VO2 max). Greater CRF, typically assessed by exercise tolerance testing, has consistently been shown to be associated with lower all cause and cardiovascular mortality. Our study utilized the Bruce Protocol, one of the most widely used maximal exercise tests, to estimate CRF.

Earlier studies have shown only a modest correlation between activity levels when tracked from childhood to adulthood [17]. However, a study by Dennison et al found inter-school sports participation a strong predictor of adult involvement in sports [18]. Dohle and Wansink found that participation in varsity sports in high school was associated with remaining physically active after the age of 70 [19]. In the Cardiovascular Risk in Young Finns Study 2309 boys and girls were followed longitudinally over 21 years [20].

Their results support the finding that engaging in competitive youth sports significantly predicts adult physical activity. Similarly, our study demonstrates that participation in competitive athletics in adolescents is associated with higher exercise participation in adults. Our study also shows greater CRF as measured by total treadmill exercise time and METS. Reasons for this association may have to do with acquisition of certain skills during youth sports participation. These could include greater interest, knowledge and proficiency in sports. In addition, self-efficacy, defined as one’s belief in one’s ability to succeed in specific situations or accomplish a task, may be increased. Other important factors may be the generally higher socioeconomic status enjoyed by high school athletes as well as genetics and personality.

According to The National Federation of State High School Associations it is estimated that 55 percent of all high school students play a sport. At a time of shrinking school budgets, it appears that investment in school athletic programs is in danger. From 2009 to 2011, $3.5 billion was cut from schools’ sports budgets, and an estimated 27 percent of U.S. public high schools will not have any sports by the year 2020 according to Up2US, a nonprofit for sports-based youth development. Countering this trend is important. Administrators and parents should work together to enhance school participation in fitness and sports programs. These programs, by encouraging fitness and healthy lifestyle choices can be a key element in combating the rampant epidemic of poor fitness and early morbidity and death.

Our study demonstrates that participation in interscholastic high school athletics is associated with greater cardiorespiratory fitness and a greater tendency to engage in physical exercise in adulthood. If confirmed, in other trials, encouraging greater participation in high school athletics may offer a promising approach to reducing the high toll that poor CRF and obesity exacts on our society.

This study has several limitations including the observational design. Confounding factors could be present that could influence the results. In addition, we did not measure blood lipids, which may have yielded important additional information. Finally, Sample sizes are fairly small for all HS athletic participation levels aside from zero and four years.

The authors funded the research.

We declare there are no competing interests.