Background: Ischemic heart disease is the most common cause of death all over the world; its rate is expected to be accelerated in the next decade. Adiponectin is a protein hormone that modulates a number of metabolic processes, including glucose regulation and acid oxidation.

Subjects and methods: Ninety subjects were recruited from catheterization unit (36 subjects with normal coronary arteries and 54 patients with CAD) and they were subdivided into four groups according to the number of affected vessel. Their modified Gensini score was calculated according to the severity of coronary lesions. Blood samples were withdrawn to measure adiponectin levels.

Ischemic heart disease is the most common cause of death all over the world; its rate is expected to be accelerated in the next decade thus will lead to high financial cost [1]. It is considered that Adipose tissue is a storage depot of excess energy and it is known that it participates in mediating vascular complications. It has an endocrinal and paracrinal functions as it secrets numerous mediators called adipokines that share in different metabolic processes.

Leptin, TNF, and a plasminogen activator inhibitor-1 are adipokines that have atherogenic effects, while adipokines like adiponectin may have a protective role through its anti-inflammatory and anti- atherogenic effects [1]. It inhibits the class a macrophage scavenger receptor which leads to inhibition of foam cells formation.

Moreover, adiponectin inhibits LDL binding to biglycan; this ultimately decreases lipid accumluation in the subendothelial space, the cause of atherosclerotic plaque formation [2]. We aimed to study the correlation between adiponectin serum levels and CAD severity as assessed by coronary angiography using modified Gensini score [3].

Exclusion criteria were DM, infectious disease, thyroid dysfunction, and liver dysfunction based on medical history or laboratory tests, neoplastic disease, chronic renal failure (Cr>2.0 mg/dl) or on hemodialysis. The study was accepted by the ethics committee and written consent was taken from the patients.

Selective coronary angiography by standard seldinger technique was performed for all subjects. Two cardiology interventionists who were blinded to study evaluated the coronary angiograms. The modified Gensini score was used to assess coronary lesions severity. Scoring was applied as follows: lesion in left main coronary was given score 5; lesions in proximal left anterior descending (LAD) artery and the left circumflex artery (LCX) were given score 2.5; while lesion in the mid-LAD artery was given score 1.5; lesions in the first diagonal branch (D1), the obtuse marginal branches and the right coronary artery were given 1 score; lastly lesions in the second diagonal (D2) and the LCX posterior-lateral branch were given score 0.5 [3]. Then the score was calculated as seen in Figure 1.

Regarding age and sex; no significant difference was found in the studied groups (P>0.05). In patients with CAD, the levels of serum adiponectin were found to be lower than those without CAD by a statistically highly significant value (P<0.001). Moreover, the patients with two vessels, multi-vessels disease and LM disease had lower adiponectin levels significantly compared to normal coronary arteries group (P<0.001) (Table 1).

Table 1: Comparison between the studied groups as regard to age, sex, and risk factors of CAD and serum adiponectin levels.

On the contrary the adiponectin levels in patients with singlevessel disease and normal coronary arteries group showed no significant difference (P>0.05).

Table 2: Comparison of serum adiponectin levels and modified Gensini score in the studied groups and subgroups.

Receive-operating characteristics (ROC) curve showed that cutoff value of serum adiponectin level for detection of CAD was<4.6 μg/ml with sensitivity 85%, specificity 69%, accuracy 79%, PPV 81% and NPV 76%. As regard cut-off values of serum adiponectin level for prediction of severity of CAD in two-vessels disease (G2), it was ≤ 4.4 μg/ml, for multi-vessels disease (G3), it was<3.9 μg/ml, and finally for left main disease (G4), it was<3.8 μg/ml (Figure 2 and Table 3).

Table 3: Sensitivity, specificity and accuracy of serum adiponectin levels in the studied patients and subgroups for detection of CAD and prediction of its severity. There was a significant negative linear correlation between modified Gensini score and serum levels of adiponectin in the studied patients group and subgroups (Figure 3 and Table 4). 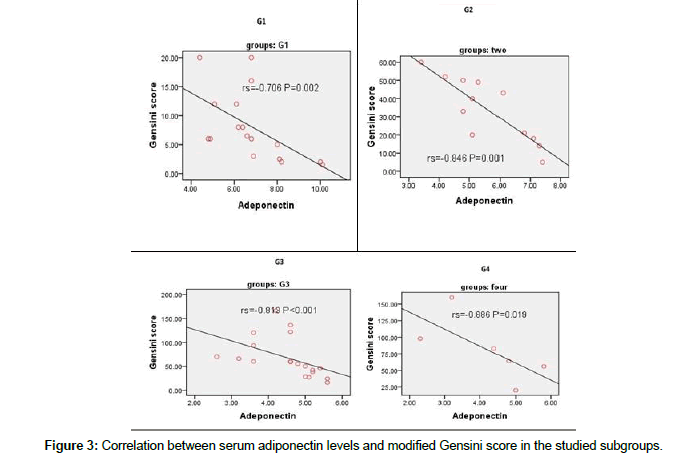 Coronary artery disease is a major cause of mortality and morbidity in developed countries. Although its rates of mortality decreased in the last four decades, it remains the cause of death in more than one-third of individuals over age of 35 [4-6].

Leptin, TNF, and a plasminogen activator inhibitor-1 are adipokines that have atherogenic effects, while adipokines like adiponectin may have a protective effect through its antiinflammatory and anti-atherogenic properties [1]. It inhibits the class A macrophage scavenger receptor which leads to inhibition of foam cells formation.

Moreover, adiponectin inhibits LDL binding to biglycan which is a vascular proteoglycan. This ultimately decreases lipid accumluation in the subendothelial space, the cause of atherosclerotic plaque formation [2]. Therefore, understanding the clinical importance of adiponectin may have a role in prevention of atherosclerosis [7].

Our study showed that, patients with angiographically diagnosed CAD had significantly lower levels of serum adiponectin than the normal coronary group (P<0.001). This agreed with Mohamed et al., who found that adiponectin levels were significantly lower in CAD group compared to the control group and revealed that this finding might be attributed to the acceleration of vascular inflammatory events caused by loss of protective effects of adiponectin on the vascular endothelium. Similarly, Selcuk et al. [8] found lower adiponectin levels in patients with significant CAD than those without CAD in a study performed in patients undergoing coronary angiography.

In addition, our study showed no significant difference in adiponectin levels in patients with single-vessel lesion compared to the normal coronary arteries group (P>0.05); whereas it was found to be significantly lower in patients with two-vessels, multi-vessels and left-main lesions when evaluated by usual method of scoring systems for severity of CAD. These results were similar to Gokosoy et al. [9] who found that, patient with single-vessel disease and control group had no significant difference in serum adiponectin levels, while patients’ subgroups with two-vessels and multi-vessels lesions had significantly lower levels compared to control group. As a result, low serum adiponectin levels may indicate multi-vessels (≥ 2 vessels) or left-main disease rather than single-vessel disease [10].

This disagreed with Mohamed et al., who found that adiponectin levels were significantly lower in patients with single-vessel lesion compared to the control group; this may be attributed to small numbers of patients of single-vessel disease in our study compared to their study. In another study done by Cavuflolu et al. [11] in which coronary angiography was performed for male patients with stable angina pectoris, unstable angina pectoris and NSTEMI, it was found that low serum levels of adiponectin had a predictive role in occurrence of acute MI and cardiac mortality. It has been suggested that CAD patients with complex lesions have lower levels of serum adiponectin that may indicate vulnerability of the plaque [12].

When we analyzed CAD patients subgroups, a significant negative correlation was found between adiponectin levels and modified Gensini scores, meaning that, there was lower levels with CAD progression, and it was highly statistically significant higher in patients with two-vessels disease, multi-vessels disease and left-main disease compared to single-vessel disease, and in multi-vessels disease and left-main disease compared to two-vessels disease. Similarly Shams et al. [13] found a significant linear negative correlation between adiponectin levels and severity of CAD based on usual method for evaluation in coronary angiogram. In our study, the mean Gensini score in the patients group was found to be 40.52 ± 41.02 and when we demonstrated the cut-off point of serum adiponectin level for detecting CAD, it was<4.6 μg/ml with sensitivity 85%, specificity 69%, accuracy 79%, PPV 81% and NPV 76%. As regard cut-off values of serum adiponectin level for prediction of severity of CAD in twovessel disease (G2), it was ≤ 4.4 μg/ml, for multi-vessels disease (G3), it was< 3.9 μg/ml, and finally for left main disease (G4), it was< 3.8 μg/ml.

The strength of our study was that, it approved the presence of a significant negative linear correlation between adiponectin levels and modified Gensini score as a predictor of severity of CAD not only in total patients but also in each subgroup of CAD patients categorized by usual method of scoring system for reporting coronary angiogram individually [15].

Only total form of adiponectin was measured while High Molecular Weight (HMW) adiponectin alone may be a clinically useful marker of CAD than total form.

Serum adiponectin levels are lower in CAD patients in comparison to normal coronary arteries group. The lower the levels the more severe CAD will be. So, measurement of adiponectin levels may be helpful as a diagnostic tool in risk stratification of patients with CAD.