1Department of Cardiology, College of Medicine, University of Menoufia, Egypt

Conclusions: In asymptomatic normotensive patients with type 2 DM and preserved LVEF, the LV GLS was reduced, while there was no significant evidence of diastolic dysfunction.

The effect of DM on LV diastolic function is still controversial. Previous studies demonstrated frequent association of impaired LV filling and type 2 DM during the earlier stage of the disease before systolic function becomes impaired. Most of these studies assessed systolic function by way of LVEF %, while evaluating diastolic function by pulsed wave Doppler and Tissue Doppler velocity echocardiography [1-3]. The effect of DM on LV compliance was explained by diabetic microvasculopathy, accumulation of advanced glycation end products in myocardial tissue, and change in myocardial metabolism. Investigators supposed myocardial injury by over the uptake of myocardium to lipid as a result of insulin resistance of visceral adipose tissue, with associated accumulation of triglyceride in the myocardium [4]. The oversupply of myocardium with fatty acids is associated with disruption of mitochondrial function with subsequent myocytes damage which in turn is replaced by fibrous tissue. Myocardial fibrosis will decrease LV compliance [5].

Subclinical systolic dysfunction in DM can be recognized using tissue Doppler velocity and myocardial strain speckle tracking echocardiography beyond that indicated by LVEF%. The aim of the current study was to demonstrate the effect of type 2 DM on the LV diastolic function according to the latest recommendations of the American Society of Echocardiography [6] and on LV systolic function assessed by speckle tracking echocardiography among asymptomatic normotensive patients with preserved LVEF.

We recruited 40 patients (with mean age 57.3 ± 10.8) with type 2 DM between June 2016 and March 2017 who had followed up in diabetic outpatient clinic of Aljahra central hospital, Kuwait. The inclusion criteria were patients with type 2 DM with preserved LV systolic function (LVEF >50%). World Health Organization criteria were used to diagnose Diabetes Mellitus [7]. Patients, who had a history of hypertension, coronary artery disease, previous percutaneous coronary intervention, non-sinus rhythm, valvular diseases, or kidney diseases, were excluded from the study. Those with chest pain and a normal resting electrocardiogram (ECG) were referred for an exercise stress test or myocardial perfusion imaging to exclude ischemic heart disease. A 20 sex- and age-matched healthy persons without history of DM and with LVEF >50% were used as a control group. This study was approved by the local research committee of the hospital, and written informed consent was obtained from the patients before their involvement in the study.

A VIVID E9 machine (GE Healthcare, Chicago, IL, USA) equipped with a 3.5 MHz phased-array transducer was used to make an initial two dimensional (2D) transthoracic echocardiography. The 2D imaging was performed from the standard apical and parasternal views. The average of three consecutive heartbeats was used. The standard 2D and M-mode measurements were recorded, and the LVEF% was assessed using modified Simpson’s rule. The biplane arealength method used for the measurement of left atrial volume (LAV) in apical four and apical two chamber views at the end of systole. By division of LAV to body surface area, Left atrial volume index (LAVI) was recorded. LAVI ≥ 34 ml/m2 was considered increased. The recommendations of the American Society of Echocardiography were applied when registering all of the 2D and conventional Doppler variables [8]. 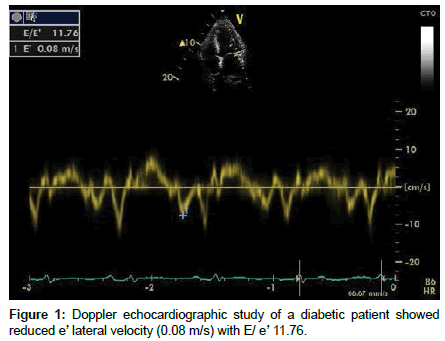 All of the data were stored digitally in a cine loop format, and the speckle-tracking imaging of the LV was done offline using a workstation (EchoPAC, version 7.0; GE Healthcare, Chicago, IL, USA). The frame rate was adjusted from 60 to 100 frames per second to display grayscale 2D images. The study began with the apical long axis view from which the time of aortic valve closure was marked. Then, apical four chamber and apical two chamber views were used. Automated functional imaging (AFI) [9] was used to record the LV global longitudinal strain (GLS). The software automatically traces the regions of interest to identify the whole myocardial wall. Speckle tracking echocardiography uses the sole myocardial ultrasound outlines tracked frame by frame, which is used to derive the strain. In some instances, the endocardial tracing was manually modified to attain ideal alignment. In those segments with poor tracking, the endocardial trace line was adopted until a better tracking score was achieved. The longitudinal strain percentage is defined as the change in the length of the regions of interest from end-diastole to end-systole. The LV wall was partitioned into six segments, and the computer software calculated the peak systolic strains inside each segment. GLPS-Average represents the overall peak systolic longitudinal strains of the entire LV segments.

Information were encouraged to the PC and investigated utilizing IBM SPSS software package variant 20 (Armonk, NY: IBM Corp).The Kolmogorov- Smirnov, Shapiro and D’agstino tests were utilized to confirm the ordinariness of dissemination of factors, Comparisons between groups for clear cut aspects variables were assessed using Chisquare test (Fisher or Monte Carlo). Student t-test was utilized to think about two groups for ordinarily appropriated quantitative factors. Mann Whitney test was utilized to compare between two groups for unusually appropriated quantitative factors. Correlation between the abnormally quantifiable variables was done by Spearman’s coefficient, while correlation between the normally quantifiable variables was done by Pearson’s coefficient. Statistically significant level was reached at p ≤ 0.05.

Table 2: Comparison between the two studied groups according to echocardiographic findings.

The results of speckle tracking strain analysis in all segments of the LV and the average GLS were demonstrated in table 3. Longitudinal strain of the LV was significantly different in most LV segments. Average GLS in overall segments were lower in diabetic patients in comparison to control subjects (16.9 ± 1.6 versus 19.4 ± 1.9, p<0.001) (Figure 2a and 2b). The presence of DM was the independent factor for reduced longitudinal strain after adjustment for BMI (Table 4).

Table 3: Comparison between the two studied groups according to speckle tracking echocardiographic data. 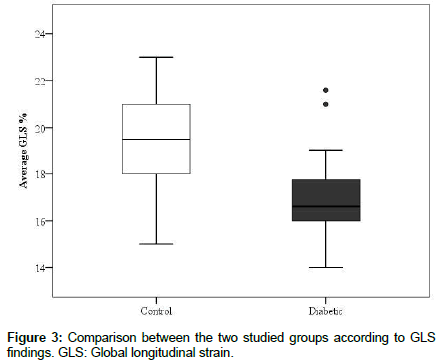 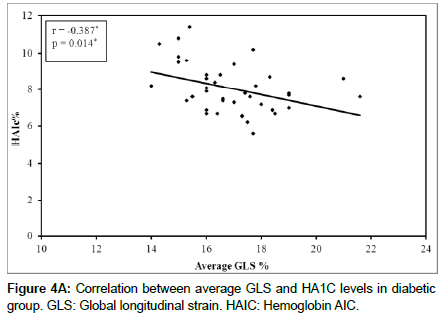 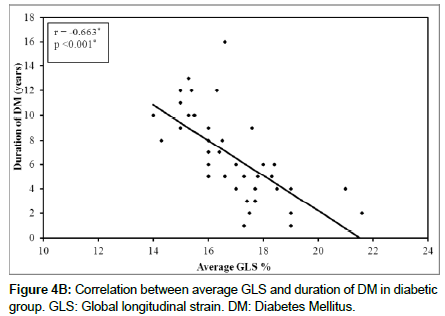 Evidence of an intrinsic diastolic dysfunction in diabetes mellitus is still controversial.

Alteration of LV filling in type 2 diabetic patients has been observed in the early course of diabetic heart disease before the development of impairment of systolic function even in the absence of coronary atherosclerosis and arterial hypertension [10].

In the present case control study, 40 patients with type-2 DM as cases; and 20 healthy subjects as controls, were included. Diastolic and systolic function of the LV were evaluated by doppler echocardiography, tissue Doppler imaging, and speckle tracking echocardiography. BMI, fasting blood sugar, HbA1c, were significantly higher in diabetic cases. There were no significant differences between cases and controls with regard to LV diastolic dysfunction.

The findings of this study are in agreement with previous researches. Romanens et al. reported no evidence of diastolic LV dysfunction in normotensive patients with type I diabetes mellitus [11]. Takenaka et al. reported a normal diastolic function of LV in their study of 60 normotensive diabetic patients [12]. They used transmitral Doppler flow velocity to assess LV filling state. Cosson et al. reported non significant difference with regard to diastolic filling of the LV in 48 normotensive diabetic patients who were free from diabetic microangiopathic complications. They used only lateral mitral annular e’ and E/e’ lateral as indices of TDI in the evaluation of diastolic function of the LV [13].

These differences between those studies might be explained by variations in clinical selection of cases, and in echocardiographic indices that were used to evaluate diastolic function. Some studies used transmitral flow which is affected by LV loading conditions and heart rate, others used TDI mitral annular velocities and pulmonary venous flow.

The current study demonstrates negative correlation between longitudinal strain and plasma level of HBA1C and duration of diabetes. future studies are recommended to strength this issue, therefore, the better control of DM may delay the progression of cardiac pathology.

The often association of DM with hypertension and ischemic heart disease made the selection of asymptomatic normotensive ones not easily with enrollment of small number of patients. Further studies of larger samples are required to support the role of speckle tracking echocardiography in early recognition of myocardial dysfunction in the diabetic persons. Some diabetic normotensive patients were excluded from the study because of the poor echogenic image of the subendocardial layer that affect recording of longitudinal strain. Estimation of LV filling pressure by invasive cardiac catheterization to diagnose diastolic dysfunction or to exclude the coronary artery disease was difficult as our patients were asymptomatic without any cardiovascular comorbidity.

In asymptomatic normotensive patients with type 2 DM and preserved LVEF, the LV GLS was reduced, while there was no significant evidence of diastolic dysfunction.

This research did not receive any specific grant from any funding agency in the public, commercial or not-for-profit sector.