Sucrose Metabolism and Regulation in Sugarcane

Sucrose Metabolism and Regulation in Sugarcane

Photo assimilates store in the form of sucrose in the stalks of sugarcane that provide 70% of world sugar. To meet the growing demand for sugar, it needs to increase the sugar yield. Sucrose accumulation is a complex physiological process controlled by network genes. This review summarized the development in the molecular regulation mechanism of sucrose accumulation in sugarcane. The molecular involving in source-sink communication, sucrose metabolism and storage were discussed. Although the sugar yield in sugarcane has not been increased by genetically modification, further researches to clarify the regulatory networks of sucrose accumulation will be helpful to breed high sugar content sugarcane.

Sugars are carbon and energy resources for organisms. These sugars originate from photosynthesis which converts inorganic CO2 into carbohydrates. Generally, these carbohydrates store in the forms of polysaccharides, such as starch and cellulose, in plant sink organs. However, sugarcane can directly store assimilates in the form of sucrose in stalk parenchymatous cells which can directly supply sugar to humans. Hence sugarcane becomes an important worldwide sugar crop and provides more than 70% of sugars in the world. The world sugar demand is growing by years. It is necessary to increase sugar yield from sugarcane. The molecular genetics control mechanisms on sucrose content in sugarcane are complex, which limits the improvement on increasing sucrose yield. To clarify the molecular mechanisms on sucrose accumulation will be beneficial to improve sugarcane quality and understand sucrose accumulation regulation in plants.

Sugar accumulations in plants are decided by source supply and sink demand. When source supply is not enough for sink demand, it defines as a source-limited plant. On the contrary, when source supply exceeds sink demand, it defined as sink-limited plant. For most of sugar plants, it seems to be sink-limited during sugar accumulation [9]. Sucrose demand in sugarcane stalks feedback regulates source leaves photosynthesis activity [2,10]. In general commercial sugarcane cultivars, photosynthesis activity decreased gradually with stalk maturation [10] (Figure 1). Moreover, high-sucrose genotypes (Saccharum officinarum L.) had lower photosynthesis activity than low-sucrose genotypes (Saccharum spontaneum L.) [10]. It demonstrates that the source-sink interactions control sucrose accumulation in sugarcane. Sucrose supply in source leaves: In C4 plants, CO2 is fixed by phosphoenolpyruvate carboxylase (PEPCase) in mesophyll cells to form C4 acid, which is decarboxylated to release CO2 in bundle sheath cells. Then the released CO2 is fixed again by ribulose-1,5-biphosphate carboxylase:oxygenase (Rubisco) into Clavin-Benson cycle to synthesize triose phosphates, which is transported in the cytoplasm to synthesize sugars. These sugars, major in the form of sucrose, are immediately loaded into phloem for export to heterotrophic organs. When sugars in cytoplasm are excessive, they are transported into vacuoles for transient storage and triose phosphates are used to synthesize starch in chloroplasts (Figure 2). The activity of photosynthesis can be influenced by development and environmental signals. Although C4 photosynthesis was firstly reported in sugarcane leaves [11], the regulation mechanisms of sugarcane photosynthesis are far unknown. 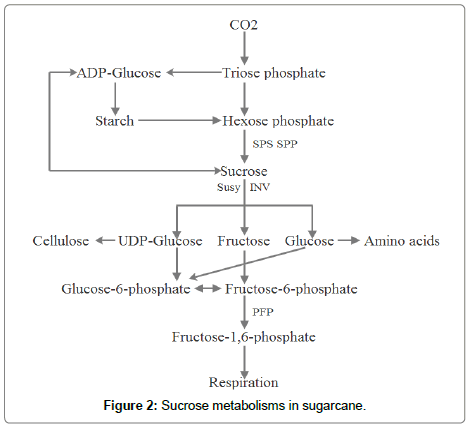 The transcriptom and photosynthesis activity in segments of the first leaf were analyzed in sugarcane [12]. It showed that the middle segment had the highest photosynthesis rate, higher abundance and activity of PEPase and the most genes expression abundance including enzymes in Calvin-Benson cycle. However, there were no difference of Rubisco activity and the transcriptional expression of PEPase along the leaf segments. When exogenous sucrose was supplied on sugarcane leaves, the photosynthesis activity was decreased and the activity of Rubisco was also down-regulated, but the activity of PEPCase did not change [13]. Moreover, the activities of sucrose metabolism enzymes, invertase, sucrose phosphate synthase and sucrose synthase, were up-regulated under exogenous sucrose treatment [13]. These studies indicated that PEPCase and Rubisco were the key regulating points to control source supply in sugarcane source leaves. As a C4 plant, sugarcane leaves have two CO2 carboxylase, PEPCase and Rubisco, which cooperated to regulate photosynthetic activity [10]. The activity of PEPCase can be developmentally regulated and the activity of Rubisco can be regulated by sugar feedback in sugarcane.

Sucrose accumulation in stalks: The photo assimilates synthesized in source leaves will be transported by phloem to heterotrophic sink organs to supply plants growth and development. When the unloading assimilates exceed the metabolism demands, they will be stored in sink organs or inverted to other storage carbohydrates. Once more assimilates, major in the form of sucrose, accumulate in sink cells, it will induce high turgor pressure. Plant sink cells use two strategies to keep low turgor to drive continuous unloading. One is to compartment sucrose during cytoplasm, vacuole and apoplasm. The other is to synthesize low osmotic polymers such as starch, protein and oil to reduce turgor [6,9]. In sugarcane stems, sucrose is unloaded symplasmically firstly into storage parenchyma cells, then leak into apoplasm with sucrose concentration at 400- 700 mM [14,15]. The apoplastic sucrose cannot return into phloem preventing by a suberized cell walls barrier of bundle sheath cells [16]. Sucrose leakage in apoplast not only increases the amount of sucrose storage but also maintains a low turgor homoeostasis of parenchyma cells to accelerate sucrose accumulation [14]. Hence sucrose compartmentation between vacuole and apoplast is a control step for sucrose accumulation in sugarcane. It can be postulated that there is a low tugor maintence mechanism during sucrose accumulation and redistribution between apoplasm and symplasm in sugarcane stalks. Sucrose is actively metabolized to continuously hydrolyze and resynthesize and used for respiration, metabolism and storage in sugarcane internodes [1,17] (Figure 2). In immature internodes, 66% of carbon partitioned into respiration and synthesizes of proteins and fiber, while 34% of carbon was stored as sucrose [18]. But in more mature internodes, 66% of carbon partitioned into sucrose and carbon for respiration, proteins and fiber syntheses decreased [18]. The carbon assimilates mainly partitions between sucrose and fiber in mature sugarcane stalks. The compartmental distribution and partitioning of sucrose decide sink strength and sucrose yield in sugarcane stalks. However, the molecular networks to control sucrose content in sugarcane stalks are needed to be studied.

Sucrose metabolism enzymes: Enzymes catalyzing sucrose synthesis and hydrolysis regulate sucrose content in sugarcane. Sucrose phosphate synthase (SPS) and sucrose phosphate phosphatase (SPP) are responsible for sucrose synthesis. SPS is the key enzyme regulating sucrose synthesis which can be active or inactive by protein phosphorylation under light and osmotic stress conditions [21]. The activity of SPS can be active by glucose-6-phosphate and inhibited by Pi [21]. In plants, SPS which expresses both in source and sink takes part in sucrose re-synthesis and regulate starch accumulation [22], protein storage [23] and cellulose synthesis [24]. Invertase (INV) and sucrose synthase (Susy) catalyze sucrose hydrolysis in plants. Invertases are classified as soluble acid invertase (SAI) and neutral invertase (NI) according to their optimum pH. Invertase involves in regulating carbon allocation and development and Susy involves in regulating syntheses of cellulose, starch and protein in plants sink tissues [7]. Transcription factors: Transcription factors regulate gene expressions to control metabolism pathways in plant growth and development. The transcription factors potentially relative to regulate sucrose accumulation in sugarcane were also discovered by cDNA microarrays [30]. They were hormones and stresses response genes, such as DREB, ERF, NAC, MYB, auxin response factors ARF and ethylene regulator EIL. Sugar signaling usually interacts with other signaling pathways, for example, hormone and redox signals [45]. The Arabidopsis transcription factor bZIP11 with a sucrose control peptide and its translation can be repressed by sucrose to regulate amino acid metabolism [46]. The homologous of Arabidopsis bZIP11 in sugarcane still need to be identified. Over expression of Arabidopsis transcription factor AtDREB2A CA increased sucrose content and drought resistance in transgenic sugarcane plants [47]. It demonstrates that sucrose accumulation may interact with drought and hormone signal pathways.

Genes involving in cell war metabolism: In sugarcane mature stems, the unloaded sucrose is partitioned into polysaccharides synthesis. Cellulose is synthesized from UDP-glucose by cellulose synthase complex consisted of cellulose synthase (CesA) and accessory proteins. UDP-glucose is hydrolyzed from sucrose by sucrose synthase which may regulate the proportions of sucrose and cellulose [7]. Over expression of Susy in poplar increased the cell war cellulose content [48]. Genes relative to cell war synthesis were identified in sugarcane. The primary cell war synthesis related genes, ShCesA1, ShCesA7, ShCesA9 and Shbk2l3 were highly expressed in parenchyma and secondary cell war synthesis related genes, ShCesA10, ShCesA11, ShCesA12 and Shbk-2 were highly expressed in rind [35]. The correlative effect between sucrose accumulation and fiber synthesis in sugarcane stalk is still unknown. It needs more researches on different sugarcane cultivars with diverse sucrose and fiber contents to clarify the relationship between sucrose and fiber contents.

Sucrose metabolism is composed of synthesis, breakdown and conversion to other sugars, such as hexoses, oligosaccharides and polysaccharides. In order to increase sucrose content and sugar yields, studies have focused on increasing sucrose synthesis, reducing sucrose hydrolysis or converting sucrose to other sugar forms to increase total sugar yield. Nevertheless, these attempts to improve sugar yield in field-planted sugarcane plants by molecular genetic engineering have not been achieved due to the complex interactions during sucrose metabolism enzymes and the osmotic regulation of sugars in storage parenchyma cells. SPS is a key regulatory enzyme for sucrose synthesis. However, over expression of SPS in sugarcane didn’t increase the sucrose yield [49]. Reduced CIN activity in transgenic sugarcane plants led to a higher ratio of sucrose/hexose in culm internodes but the growth vigor of these plants decreased greatly than untransformed plants [50]. Pyrophosphate: fructose 6-phosphotransferase (PFP) is a key control point in glycolysis. Down-regulation of PFP activity in sugarcane increased sucrose concentrations in immature internodes [51]. Expression of a vacuolar-targeted expression of bacterial sucrose isomerase (SI) which converts sucrose into isomaltulose in sugarcane led to double sugar content accumulation under greenhouse growth condition [52]. Nevertheless, total sugar contents in SI transgenic sugarcane were not increased under field growth conditions [53]. 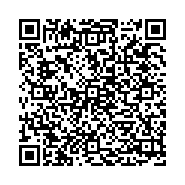