Pinellia ternata (Thunb.) Breit. is a kind of medicinal plants (perennial herb) belonging to araceae, the medicinal parts are tubers which is an important major traditional Chinese medicine. It has many pharmacological effects such as dryness phlegm, downbear counterflow and check vomiting [1-3]. In recent years, the researchers found that P. ternata had the functions of antifertility, anticancer, antilipidemic and treating coronary heart disease [4-7]. According to statistics, there contain P. ternata in more than 200 kinds of proprietary Chinese medicine [8]. Because of the market demand increasing, together with the predatory excavation and changes of environment conditions, the medicinal materials of wild P. ternata appeared serious shortage. So artificial planting has become a major means to resolve the medicinal materials shortage of P. ternata. However, artificial planting easily led to lots of problems, such as the frequent damage of diseases [9-11], germplasm degeneration and yield decline [12-17] and it requires a large amount of reproduction materials and high cost. Although it provided a new approach that the tissue culture technology of P. ternate got success for to solve its reproduction and germplasm innovation, but the workload to transplant test-tube plantlets is very large, the survival rate is lower, and its management process is also complicated. Therefore, the technology has a slight practical significance in large-scale cultivation of P. ternata.

Our research team based on many years of trials [12,26,35], using the leaf blades or petioles as explants from aseptic seedlings of P. ternata to induce callus, then changing the intercellular bonding degree of callus cells by regulating carbon sources and plant growth regulators concentration and culture conditions to obtain the discrete and loose callus. Follow on to carry through the suspension culture to disperse callus cells into homogeneous cell masses (in this paper called “cell micromasses”) suspension system which is the important basis of subsequent synchronization differentiation. Finally, we successfully constructed and optimized the technology system of artificial embryos synchronization culture of P. ternata. This study laid a reliable technological foundation for solving required a large number of excellent-quality seed stocks and seedlings in large-scale cultivation of P. ternata.

In this experiment, the pH value of all media was 5.8, temperature was (25 ± 1)°C, illumination intensity was 1500 lx to 2000 lx; illumination time was 12 h/d. For particular conditions were specified otherwise.

The tubers of P. ternata were washed with running water for 2 h, then to sterilize the tubers for 45 s by 75% alcohol and to wash 3 to 5 times by sterile water, and to sterilize for 8 min with mercury bichloride and to wash 3 to 5 times by sterile water. Finally, the tubers using sterile filter paper to dry surface water were inoculated on the culture medium (MS+1.0 mg/L 6-BA+0.1 mg/L IBA+30 g/L sucrose+6 g/L agar) to induce the asepsis seedlings. Selecting the vigorous seedlings of 15 d age, cutting the leaf blade into 0.5 cm2 small pieces or 0.5 cm petiole short segments to use as the explants.

The orthogonal table of L9(34) was selected for studying the effects of three factors including 2,4-D, 6-BA and explant sources in callus induction (Table 1). Each treatment contained 5 test bottles, each bottle inoculated into 3 explants, to repeat 3 times, and regularly checking the induction rate and biomass (fresh weight) of the callus, so as to screen the appropriate media to suitable for callus induction and proliferation. At the same time, the fresh and well glossy callus selected were inoculated on the appropriate media to subculture and proliferate for obtaining discrete and loose callus which will be used for suspension culture.

Establishment and optimization of suspension culture system of cell micromasses

Selecting the discrete and loose callus to inoculate into the suitable liquid medium (above appropriate medium for callus proliferation, but not contain agar) for suspension culture (rotating speed 90 rpm). After 7 to 10 days, the suspension cultures were filtered through 40 mesh screen to obtain homogenous cultures. The homogenous cultures was continued to culture in MS medium containing different concentrations of 2,4-D, 6-BA, sucrose and casein hydrolysate (CH) to set up suspension system composed of uniform cell micromasses (synchronization). The suspension system was optimized through L9(34) orthogonal experiment which factors and levels were shown in Table 2. The medium bottling volume was 30 mL per bottle, the inoculation quantity was 2 g loose callus per bottle, inoculating 5 bottles per treatment, and repeated 3 times. The rotating speed of shaking table was 90 rpm. After 25 days, sucking cell micromass to use for subculture and proliferation. Meanwhile, filtering suspension cells to weigh and calculate the biomass.

* Different lowercase letters at the end of figure on the same column indicate significant differences (P<0.05). The same below.

Synchronization differentiation of cell micromasses and formation of artificial embryos

Sucking the uniform cell masses (synchronization cell masses) from continuous subculture 3 weeks to inoculate in basal medium (MS+10 g/L sucrose+300 mg/L CH) and adding different concentrations of 6-BA and IBA (Table 3). The medium bottling volume was 30 mL per bottle, the inoculation quantity was 50 cell micromasses per bottle, inoculating 5 bottles per treatment, and repeated 3 times, the illumination intensity was 3000 lx to 4000 lx, the rotating speed of shaking table was 50 rpm. The differentiation rate of cell micromasses and the amount of artificial embryos were calculated when the process of artificial embryos formation was basic completed.

Table 3: Effects both 6-BA and IBA for cell micromasses to differentiate and form artificial embryos.

The SPSS 20.0 and DPS v 7.05 software were used for statistical analysis in this test.

Effects of explants and plant growth regulators for callus induction

The effects of callus induction rate and its biomass (fresh weight) by orthogonal combining experiment both explant based sites and plant growth regulators were analyzed. The results showed that the combination both explant parts and plant growth regulators had different degree influence for the biomass, color and texture of callus, but the difference was not too big for the induction rate of callus (Figure 1 and Table 1).

The callus appeared early after inoculating 7 to 10 days when the petiole base of P. ternata was used explants. At the 15th day, most of the treatments formed callus. The rate of callus formation reached the maximum at the 25th day. The high concentration of 6-BA was advantageous to the callus induction and proliferation, and the callus was more loose while adding high concentrations of 2,4-D into the medium. Overall, for callus induction and proliferation, leaf blade was the most explants, petiole base was second, and petiole top was less.

Culture conditions of suitable for cell micromasses formation and proliferation

The homogeneous cell micromasses of P. ternata were continuous subcultured for 3 weeks by MS+1.0 mg/L 2,4-D+0.5 mg/L 6-BA+40 g/L sucrose+300 mg/L CH to form the larger cell masses (Figure 3A). Through the preliminary experiment based on different plant growth regulators combination, we found 6-BA and IBA combination showed a good effect for the cell micromasses synchronization differentiation to form artificial embryos. So 6-BA and IBA combination were selected in the suitable ratio test which the larger cell masses by successive transfer culture for three weeks were used for synchronization differentiation to form artificial embryos, the results were shown in Figure 3, Figure 4 and Table 3. 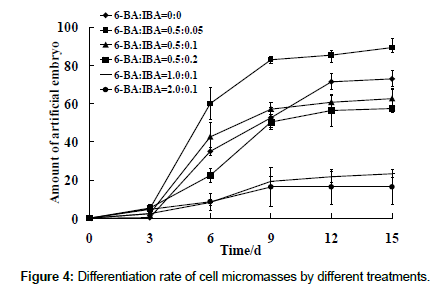 The yield and germination rate of P. ternata natural seeds are all lower, and its medicinal materials yield is lower and the production cycle is longer when the natural seeds are used as breeding materials. So, people mainly adopt the tubers propagation in artificial planting of P. ternata. Because P. ternata is a weak herbaceous plant and the ability to compete against weeds is weaker. In order to reduce the heavy weeding workload in artificial planting, the planting pattern of high density planting to suppress weeds was widely used [12,36]. Therefore, the dosage of seed stock is larger and its production cost is higher in the present production conditions P. ternata. In view of this phenomenon, it has become the key problem to realize the industrialization of medicinal materials that how to construct the scale production technology of P. ternata seeds or seedlings.

For important medicinal plants like P. ternata which natural seeds do not suitable for medicinal materials production, tubers propagation need very high cost and test tube seedlings are inconvenient to field operation, its artificial seeds production is undoubtedly a promising technology choice, and this technology has also attracted many researchers. However, because artificial embryos of P. ternata must are the small tubers by callus differentiation and development, but the callus of P. ternata is quite tight and difficult to be dispersed, this is a fatal restriction factor for the embryo synchronization and it has not been broken through, causing the researchers almost still stay on these links such as artificial seed production process, artificial endosperm preparation and artificial seed coat screening, etc [13,20,39,46-48].

This study started with regulating carbon source and plant growth regulators concentration, cooperating with appropriate culture conditions, and solved effectively the problem which can reduce intercellular adhesion to form discrete and loose callus. Based on this, we established the dispersive and homogeneous cell micromasses suspension system; it realized the first breakthrough of P. ternata artificial embryos synchronization technology. This research work laid a good foundation for to build the industrialization technology of P. ternata artificial seeds.

This research belongs to the research project of the tutor, which is accomplished by the unified guidance of the tutor in the same laboratory. There is no conflict of interest. All the data and materials in this paper are reliable and available from our lab.