Thrombosis of the Inferior Vena Cava (IVC) is an under recognized entity with a variety of clinical presentations. Thrombosis of the IVC in the absence of congenital abnormalities is rare; when it does occur, it is usually the result of a predisposing hypercoagulable state. We describe a rare presentation of acute thrombotic occlusion of IVC, which was diagnosed accidentally.

50 years male presented with history of pain in bilateral sacro iliac region for 4 days. Pain was moderate in severity, and was more on walking. Patient took treatment from local hospital in the form of analgesics. There was no relief of pain. His X ray of lumbosacral spine was done, which was normal. His pain increased in severity over next 3-4 days and he was confined to bed. He then went to private hospitals, where his blood investigations were done, which were normal. His CT for lumbosacral was also done and was normal. They also did ultrasound of abdomen, which showed thrombotic occlusion of right common iliac vein and whole of Inferior Vena Cava (IVC). He was then referred to us. All other abdominal organs were normal. X ray of chest was also normal.

On examination, there was no pallor, cyanosis, jaundice or pedal oedema. Jugular venous pressure was normal. Blood pressure was 130/80 mm HG, pulse 76/min, regular. Homans’ sign was negative on both sides.

He was taken up to catheterization laboratory. Femoral venography was done on right side, which showed total occlusion of right common iliac vein. IVC was not visualized. Large collateral was there on the right side of IVC opening just below Right Atrium (RA) in to the IVC (Figure 1). Figure 1: Femoral venography shows total occlusion of upper common iliac vein and IVC. There is large collateral on to the right of IVC.

Terumo guide wire easily crossed through IVC into RA, suggesting that it was occluded with recent thrombus. 60 mm balloon was taken and multiple holes were made in it with femoral puncture needle. It was kept in IVC and through it alteplase infusion 0.001 mg/kg/hour was given for 20 hours. Check angio was done after 20 hours. Common iliac and lower portion of IVC was reanalyzed but upper part of IVC was still occluded. Again balloon with holes was kept in upper part of IVC and 24 hours infusion of alteplase was given through it. Check angio showed recanalization of IVC, but still a lot of thrombus was there (Figures 2 and 3). Figure 3: Recanalization of IVC after catheter directed thrombolysis for another 24 hours, bot thrombus still there in IVC.

9F long sheath was now inserted into IVC and manual thrombus extraction was done. There was good flow, but still thrombus was there and there was narrowing in upper part of IVC (Figure 4). IVC filter was inserted from internal jugular approach (Figure 5), and IVC was dilated with 14 mm balloon (Figure 6). There was good flow in IVC (Figure 7), with hardly any thrombus left. Patient had complete relief of has pain in sacro iliac region and was able to walk normally. He was discharged on tablet dabigatran 150 mg twice a day. Check angio after two months showed no evidence of thrombus in IVC. IVC filter was retrieved. Patient remained asymptomatic. Anticoagulants were stopped after one year. On follow up of two years, patients remained asymptomatic. 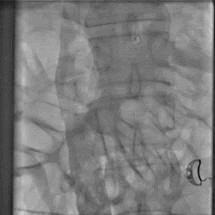 The clinical presentation of IVC thrombosis varies according to the anatomical level of thrombosis, the degree of occlusion and chronicity of the thrombus. Acute IVC Thrombosis (IVCT) is generally accompanied by a sudden onset of symptoms, while chronic IVCT, presents with a more gradual onset, secondary to thrombotic IVC occlusion with already established venous collateralization or gradual narrowing of the IVC [1]. As with DVT, the typical presentation of IVC thrombosis may present with pain, swelling, and cramping of the lower extremities. In addition, and more specific to IVC thrombosis, back and pelvic pain are generally the earliest symptoms. In cases that have renal vein involvement, symptoms may involve hematuria and flank pain whereas bilateral renal venous thrombosis can result in acute renal failure [2].

The cornerstone of treatment is systemic anticoagulation therapy to reduce thrombus propagation and minimize the risk of pulmonary embolization while alleviating lower extremity symptoms .The open vein hypothesis of DVT would seem to translate to patients with IVC thrombosis as well, in that long term outcomes would improve with more aggressive endovascular treatment involving thrombolysis or thrombectomy [10]. Although placement of IVC filter for endovascular treatment of iliofemoral vein thrombosis may not be indicated consideration for placing a filter should be made when treating IVC thrombus given the more extensive and possibly free floating clot [11].

Our patient was unusual in that he presented with pain in bilateral sacro iliac regions, had no predisposing conditions, and had no clinical features of IVC occlusion, and had a very short history.Paksyo and Gormus examined 9640 patients experiencing back pain or sciatica, using MRI over two years.

There were 13 (0.13%) patients who had radicular symptoms that clinically mimicked lumbar disc herniation or spinal stenosis. All of these patients had inferior vena caval obstruction or occlusion that caused engorgement in the epidural and paravertebral venous system, causing nerve root compression.