A conventional electron-ion plasma supports a wide variety of nonlinear waves. These waves have been thoroughly researched since the path breaking study of Washimi and Taniuti [1], who investigated small amplitude ion acoustic (IA) waves in an unmagnetized plasma consisting of cold ions and hot, isothermal electrons by deriving the well known K-dV equation. At about the same time, Sagdeev [2] used his pseudo-potential approach to study the basic properties of arbitrary amplitude IA solitary waves. This study was quickly extended to plasmas containing two components of electrons with different temperatures [3,4]. More than one component of electrons, gave way to more than one component of ions and Ferrante [5] studied the properties of IA solitons in two and three ion plasmas.

Owing to the ease with which it could be observed, the pioneering studies mentioned above were extended in every possible way. Thus various aspects of IA solitary waves were again explored in two temperature electron plasmas [6-13], multi-ion plasmas [14-21], non- Maxwellian component plasmas [22-32], finite ion temperature plasmas [33,34], pair (electron-positron)-ion plasmas [35,36] and heavier pair ion with another lighter ion component plasmas [37-40]. In addition to the very general plasma compositions and models mentioned above, the effect of streaming plasma components on ion acoustic and dust acoustic solitary waves has also been considered. The effect of streaming ions [41-46], streaming electrons [44,47,48] and even streaming dust [49,50,51] has also been exhaustively investigated.

cometary plasma is a genuine multi-ion plasma. While positively charged oxygen ions were expected to be a component formed by the dissociation of water molecules [52], other positively charged ions such as H2 +, He+, He2 +, C+, OH+, H2O+, H30+, CO+, S+ etc. have also been observed [53,54]. However, it was the unexpected discovery of negative ions, in three broad mass peaks of 7-19, 22-65 and 85-110 amu with energies ranging from .03 to 3.0 keV, that made cometary plasmas genuine multi ion plasmas [55]. And, the unambiguous identification of negatively charged oxygen ions (Oˉ), opened up the exciting prospect of modelling O+ and Oˉ as an ion pair [37,38,40,56].

As regards electrons, observations by the spacecraft ICE at comet Giacobini-Ziner revealed the existence of three components of electrons: a cold, mid, and hot component where the mid component was the photo-electrons generated by the photo-ionization of water molecules [57]. In a related modelling study [58], analysis of gas production rates at comets, noticed a double peak structure of photo-electrons. And in a very recent modelling study, two kappa distributions were fitted to the observations of electrons made at comet 67P/Churyumov-Gerasimenko [59].

Thus our plasma is composed of five components: two components of electrons, both described by kappa distributions, drifting hydrogen ions (to model the solar wind impacting the comet) and positively and negatively charged oxygen ions. Previous studies on the influences of streaming components have been mentioned above.

We find that the plasma supports both rarefactive and compressive solitons [60]. Also the amplitudes of both types of solitons are sensitively dependent on the drift velocity of the lighter ions.

where ‘e’ is the electronic charge and kB is the Boltzmann’s constant. T1 is the temperature of the negatively charged heavier ions.

is the dimensionless temperature and κj are the spectral indices [63].

In what follows, ‘i’ denotes streaming ions while the indices 1 and 2 would respectively denote negatively and positively charged heavier ions [64]. Thus the equations of motion for the drifting ions and the heavier ions are given by

. All velocities are normalized by

In the above, symbols n denote the densities; z, the charge numbers and m, the masses. The normalized equation of continuity for the streaming ion is

While that for the heavier ions is

Finally, we need the Poisson’s equation, which in its dimensionless form, is given by

where the index ‘0’ indicates equilibrium values of densities.

We now use equations (2) to (8) for a nonlinear analysis. We therefore define a transformed coordinate ξ = x-Mt where M is the speed of the localized structure moving with the frame [65]. Assuming that all dependent variables are functions of ξ, we can, from (6), obtain the expression for the streaming ion density as

It may be noted at this point that ni reduces to the corresponding expression in Shan and Mushtaq [66] for αi = βi = γi =1. Similar expressions can be obtained for both ν1 and ν2.

Having thus obtained expressions for ni, n1 and n2 and for nse and nce from (1) and substituting into (8) and following standard procedures allows one to write down the energy integral as

Where V(ѱ) is now given by

The small amplitude approximation for V(ѱ) is

As a check on our results we find that expressions (18) and (19) closely resemble that given in [37] if allowance is made for the fact that we now have drifting ions.

is the amplitude and

is the width of the soliton. 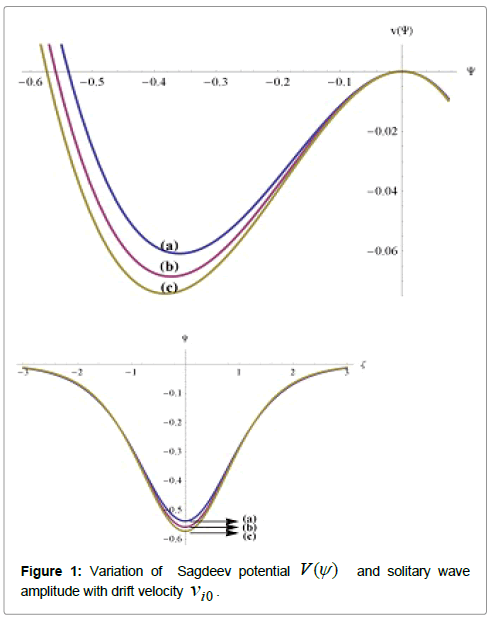 Also a comparison of Figures 1 and 2 show that the amplitude of rarefactive solitons is of much greater magnitude than the compressive solitons.

We have investigated the effect of drifting lighter ions on rarefactive and compressive solitary waves in a five component cometary plasma. Drifting lighter ions, heavier pair ions and two components of electrons, described by kappa distributions, form the five components. We find that the amplitude of the solitary waves is sensitively dependent on the drift velocities of the lighter ions: the amplitudes increase with increasing drift velocities, increasing lighter ion densities and temperatures of these ions. Thus these solitary waves are most likely to be observed under disturbed solar conditions when these parameters of the solar wind are large. And finally our relations can also be considered as generalizations of earlier studies [37,66].