It has been proposed that the end of the T wave on the electrocardiogram (ECG) might coincide with aortic valve (AoV) closure [1]. However, a recent study demonstrated significant variability in the timing of AoV closure with respect to the ECG, when assessed by transthoracic echocardiography (TTE) [2].

Excitation-contraction coupling during systole is well described [3]. Electrical depolarization of the ventricles opens voltage gated Ca2+ channels (ICa), which in turn trigger Ca2+ release from the sarcoplasmic reticulum. Increased intracellular Ca2+ level lead to mechanical contraction and ejection of the ventricular blood that constitutes the stroke volume. However, it is less well established how mechanical relaxation of the ventricles coincides with the electrical repolarization of the heart, latter of which mainly corresponds to the T wave of the ECG. Relaxation is triggered by the reuptake of Ca2+ into the sarcoplasmic reticulum, decreasing intracellular Ca2+ levels, and releasing of Ca2+ from myofilaments. As intracellular Ca2+ concentration decreases repolarization is triggered by ICa inactivation and opening of voltage-gated K+ (Kv) channels in the myocardium cell membrane [4,5]. Therefore, the existence of a precise electromechanical coupling during diastole similar to mechanical systole is less defined. Moreover, the extent and source of the intersubject variability are not clear. Consequently, the ECG waveform is not currently used to predict timing of AoV closure.

In the current study, we examined the timing of AoV closure with respect to the simultaneously recorded ECG tracing in young healthy subjects free of cardiovascular disease at rest and after exercise. Our goal was to obtain insight into the timing of electromechanical coupling during relaxation and to quantify inter subject variability.

This study was approved by The Johns Hopkins Medicine Institutional Review Boards (IRB00074229). Inclusion criteria were healthy adults, age 21-30 years, both genders. Exclusion criteria were subject refusal to participate, known cardiovascular disease of any kind (including hypertension), and pregnancy.

A standard 3 lead ECG was used for continuous monitoring of the ECG. We utilized clinically used standard lead locations as suggested by the American Heart Association (AHA) Scientific Statement on Practice Standards for Electrocardiographic Monitoring in Hospital Settings [6]. More specifically, and in accordance with the AHA Scientific Statement, we used the Mason and Likar variation of the standard limb electrodes [7]. An electronic stethoscope (Thinklabs One, ThinkLabs, CO, USA) was placed on the second right intercostal spaces at the right sternal border to record heart sounds. The start of the second heart sound (S2) on the electronic phonocardiogram was used as a marker of AoV closure [8,9]. We simultaneously recorded lead II of the ECG and the phonocardiogram for 1 minute in the supine position. Electronic stethoscope and wires to the ECG stickers were removed from the subjects and subjects were required to perform 30 squats. The electronic stethoscope and ECG wires were then reattached to the subjects at the original locations and the identical measurements were performed for 1 minute in the supine position. All data for the ‘post-exercise’ portion were collected within 3 minutes of the subjects completing 30 squats.

Data extraction was performed by a computer-automated technique as described previously [10,11]. Briefly, we applied standard 60Hz notch and high-pass filters followed by a smoothing procedure.

We then extracted the peak of the Q and T wave based on a published algorithm by Pan and Tompkins [10]. The end of T wave was extracted based on an algorithm proposed by Lepeschkin and Surawicz [11]. The beginning of S2 on the phonocardiogram was extracted as the first high frequency vibration of the aortic component of S2 [8]. The waveforms underwent manual visual inspection. Only waveforms with clear and distinct second heart sounds were included in the analysis. A mixed model with random intercepts was used to assess the effect of exercise on the ratio of (S2-aT)/(eT-aT). The same analysis was performed for the time interval of S2-eT and (S2-eT)/QT%. A similar approach was also used to assess if all baseline values (variables at rest) affected the degree of change after exercise and to assess intra and inter subject variability. Furthermore, we used this model to assess whether the RR interval or the QT interval duration affected the degree of change after exercise compared to rest values. All analysis was performed in STATA 13.1 (StataCorp LLC, TX, USA). All significance levels reported were obtained from two-tailed tests. Results were considered significant for p ≤ 0.05. GraphPad Prism version 7 (GraphPad Software, CA, USA) was used to construct the figures. 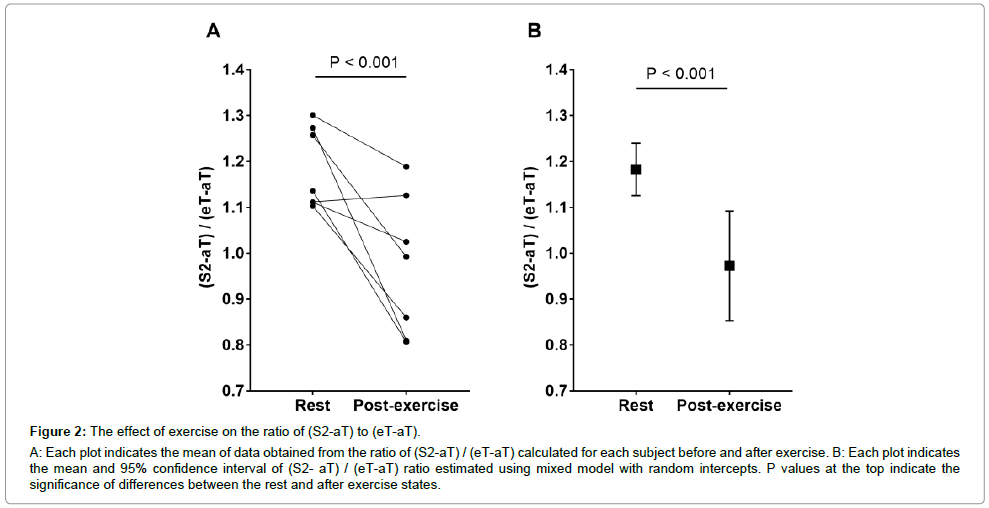 Figure 2: The effect of exercise on the ratio of (S2-aT) to (eT-aT).
A: Each plot indicates the mean of data obtained from the ratio of (S2-aT) / (eT-aT) calculated for each subject before and after exercise. B: Each plot indicates the mean and 95% confidence interval of (S2- aT) / (eT-aT) ratio estimated using mixed model with random intercepts. P values at the top indicate the significance of differences between the rest and after exercise states. 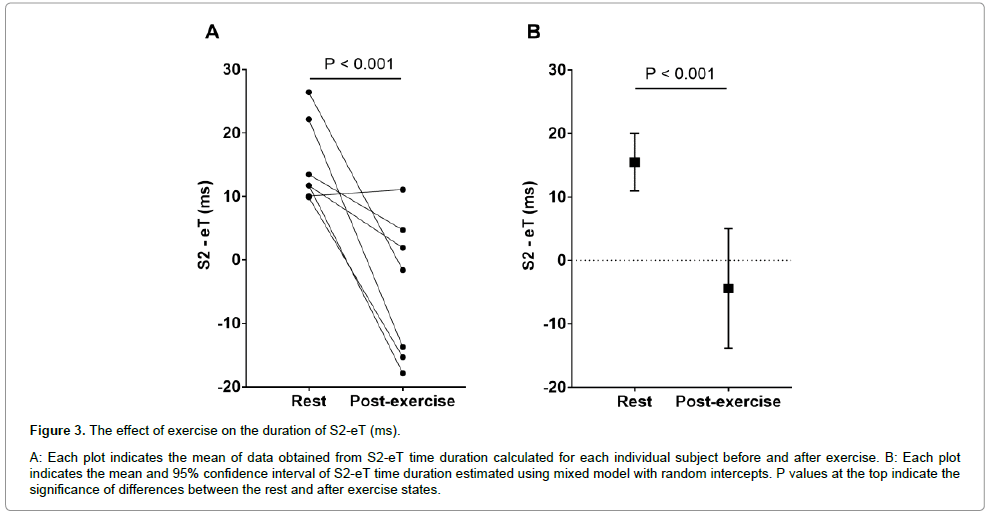 Figure 3: The effect of exercise on the duration of S2-eT (ms).
A: Each plot indicates the mean of data obtained from S2-eT time duration calculated for each individual subject before and after exercise. B: Each plot indicates the mean and 95% confidence interval of S2-eT time duration estimated using mixed model with random intercepts. P values at the top indicate the significance of differences between the rest and after exercise states. 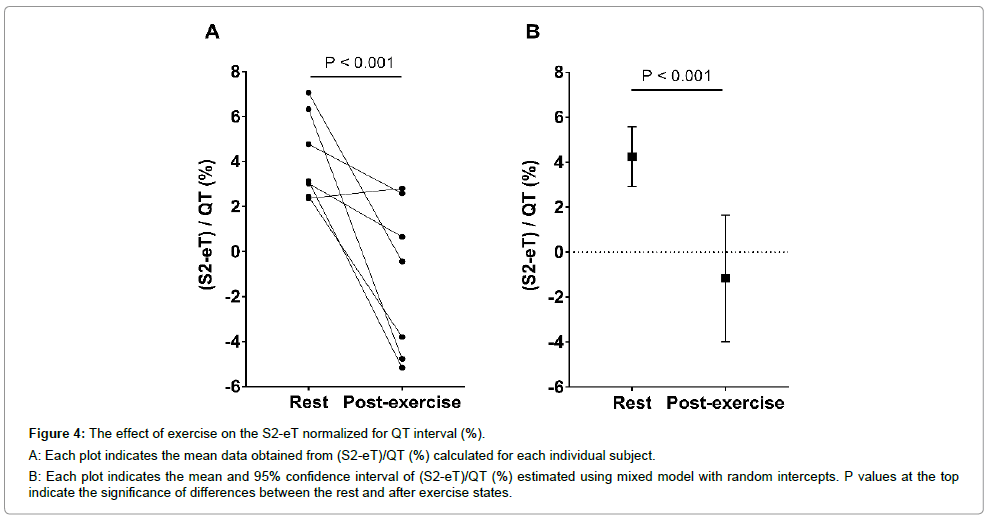 Figure 4: The effect of exercise on the S2-eT normalized for QT interval (%).
A: Each plot indicates the mean data obtained from (S2-eT)/QT (%) calculated for each individual subject.
B: Each plot indicates the mean and 95% confidence interval of (S2-eT)/QT (%) estimated using mixed model with random intercepts. P values at the top indicate the significance of differences between the rest and after exercise states.

Timing of AoV closure depends on the diastolic pressure gradient between the aorta and the left ventricle (LV) [12]. Hence, the exact timing depends on peripheral vascular resistance, mean arterial pressure, and the velocity at which the LV relaxes. Our finding that AoV closure coincides with the end of the T wave provides evidence for the existence of the electromechanical and ventricular-vascular coupling during diastole. From an electrophysiological point of view, the T wave represents the time point when all myocardial cells undergo repolarization and stop contracting. At that moment in time the LV is already past its peak contraction and the LV pressure is decreasing [13,14].

Exercise triggers multiple cardiovascular responses aimed at increasing oxygen delivery. Heart rate, stroke volume, and cardiac output increase mainly due to sympathetic activation [15]. Indeed, it is known that exercise is accompanied by increasing circulating levels of norepinephrine and epinephrine. [16,17]. Blood pressure can increase or remain the same due to idiosyncratic changes in peripheral vascular resistance in different vascular beds [18,19]. Our finding that the aortic valve closes before the end of the QT interval after exercise might be also be explained by the effects of catecholamines. While we did not obtain any cellular data or circulating catecholamine levels, we speculate that the most likely explanation for our finding is the effect of β-adrenergic stimulation on the action potential duration and increased rate of LV relaxation due to its effect on sodium, potassium, and calcium channels [20]. Increased β-adrenergic stimulation will shorten the cellular action potential duration and increase relaxation by increasing the calcium transient (accelerating ICa inactivation), reducing the inward Na+- Ca2+ exchange current, and enhancing both rapid and slow delayed rectifier K+ currents (IKr and IKs) [4]. β-adrenergic stimulation also activates the sarcoplasmic reticulum Ca2+ ATPase (SERCA) and increases the rate of Ca2+ removal and consequently, the rate of cardiac muscle relaxation [21]. Therefore, both LV relaxation and the QT interval (surrogate for the action potential duration) are coupled during exercise. Previous studies showed that both isoproterenol and adrenaline administration shortens the action potential duration in humans and leads to QT shortening as heart rate increases [4,22]. Recently, our own group reported that QT interval shortening occurs mostly due to the shortening of the ST segment as heart rate increases secondary to sympathetic activation [23].

In our study we examined the ratio of (S2-aT)/(eT-aT) to clarify the timing of AoV closure specifically in reference to the T wave for multiple individual heartbeats. In addition, we quantified the exact time duration between AoV closure and the end of the T wave at rest and after exercise, and expressed it as a % of QT interval. We showed that there is significant individual subject variability which can be explained to a large extent by QT interval duration and heart rate.

Several studies have examined the timing of AoV closure with respect to QT interval in patients with cardiovascular diseases. Boudoulas et al. showed that prolongation of the QT interval relative to QS2 (AoV closure preceding the end of the T wave) was associated with increase in 5 year mortality in patients with coronary artery disease [26]. The prolongation of the QT interval occurred mostly after myocardial infarction, indicating a disruption of normal electromechanical coupling during relaxation. Schimpf et al. investigated the echocardiogram derived AoV closure in reference to the end of T wave in short QT syndrome (SQTS) patients and in gender- and age-matched control subjects [1]. They showed that end of T wave preceded the closure of the aortic valve by a mean (SD) of 111 (30) ms in patients with SQTS, whereas in the control group AoV closure occurred during the terminal portion of the T wave (-12 (11) ms), which is consistent with our findings. Their results suggest that electromechanical coupling during LV relaxation is disrupted (electromechanical dissociation) in patients with SQTS.

Our data are consistent with that of Gill et al. who examined the timing of AoV closure measured by TTE in reference to the ECG tracing in randomly selected echocardiographic studies [2]. They demonstrated that AoV closure occurred no earlier than the peak of the T wave and, most commonly, after the peak of the T wave (peak or midpoint of T wave: 12%, down slope of T wave: 17%, end of T wave: 50%, beyond end of T wave: 21%). Their data was extracted from clinical patients at rest, with the only patient characteristics presented being age and gender. They did measure all data manually and did not present actual time delays.

Our study has several limitations. The study was conducted only in young healthy volunteers. All of them had normal T wave morphologies. Exact measurement of time intervals can be difficult in patients with cardiovascular diseases which might have heterogeneous T wave morphologies (bifid, inverted or flat) or the presence of U waves. We standardized amount of exercise (30 squats) but not exercise intensity. Also we did not have ability to measure baseline or post exercise oxygen consumption. Hence same amount of exercise might have elicited different hemodynamic effects in different subjects. The number of subjects included in the study was small. However, we used a statistical approach that accounts for individual subject variability. Finally, we did not measure any additional hemodynamic parameters in our subjects and the final measurements were performed after exercise was concluded. Therefore, there might be a number of hemodynamic responses such as hysteresis effects, which are affected by the time between exercise and our measurements. To minimize these effects we endeavored to acquire all data immediately after exercise was completed, so that the only time delay was due to sensor placement.

The authors received no specific funding for this work.