The Epidemiological Characteristics of 131 Strains of Legionella Pneumophila

Legionella bacteria were isolated from 887 central air conditioning cooling tower water, with confirmed by polymerase chain reaction -direct sequencing, from the year 2008 to 2015, Fujian province, China. The positive rate was 17.77% (131/887) with the highest detection rate in August. Legionella pneumonia (LP) serotype LP1, 5, 6, 7, 8, and 13 were co-existence with other Legionella species and LP1 was the priority to all the isolate strains with 64.89% (85/131). There have 26 different Pulsed Field Gel Electrophoresis (PFGE) type and 50% with magA+rtxA+lvh+ model. It showed Legionella isolated strains existed genetic diversity with strong pathogenicity and good adaptability to the environment.

Legionella bacteria exist widely in soil and water, is gram-negative bacteria, which could spread Legionella disease by water supply system, air conditioning or atomization inhalation of water, that is a modern city civilization disease [1-3]. Fujian is located in southeastern China, land area between north latitude 23°30′~28°22′, east longitude 115°50′~120°40′, is a humid subtropical monsoon climate. Especially in the summer, due to high temperatures, central air conditioning become indispensable to people’s life and cooling facilities, was widely using in hotels, shopping malls, hospitals, supermarket and office buildings and other public places. In the absence of regular cleaning disinfection or cleaning disinfection is not complete, often in ventilation system causing pollution, become one of the potential risk factors of Legionella infection crowd. Therefore this study intends to analysis the epidemiological data of monitoring the Legionella in the central air conditioning cooling tower water in recent years, so as to better carrying out Legionella monitoring works.

The method of Legionella bacteria isolation and identification sample processing and separation of culture identification according to the ISO 11731 water samples Legionella bacteria detection [3]. The method of Pulsed field gel electrophoresis was provided by China disease control and prevention, contagious respiratory ward. Legionella bacteria in the AscI enzyme, the dosage of each sample of 20 μmol/L. H9812 XbaI enzyme, the dosage of each sample is 40 μmol/L. The electrophoresis conditions: 6.8 s to 6.8 s, 18 h. Rubber block after dyeing, bleaching in the Gel Doc XR + imaging Gel imaging system. The analysis of pulsed field gel electrophoresis enzyme fingerprint clustering of the 40 strains of Legionella serogroups and 40 strains LP1 were used by AscI enzyme electrophoresis, and gain the size from 20 to 1200 KB of electrophoresis, different strains of stripe number ranged from 6 to 16, according to the similarity of 100%, there are 26 different type PFGE, named A0001 - A0026. Most belt type contains only one strain, but in A0006, A0008, A0019, and A0023 were all included 3 strains, A0002, A0005, A0011, A0015, A0016, and A0018 included 2 strains, different strains of similarity coefficient between 43.5%-100%.

Date statistical were analysed with Excel 2007 of survey data and laboratory results. Cluster analysis: PFGE image import BioNumerics software package for processing, choose the Dice correlation coefficient and UPGMA method, how they set to 1.5%. According to the similarity coefficient between every two images, construct the clustering tree.

The pollution of Legionella condition

There were 131 strains of Legionella separated from 887 central air conditioning cooling tower water by conventional culture with the positive rate was 17.77% (Table 1). The serotype distribution showed that LP1, LP4, LP5, LP6, LP7, LP8, and LP13 were co-existence with other species (Table 2). The rate of Legionella on the monthly was 1.53% to 45.04% during the June to November (Figure 1) and the regional distribution of the 131 stains of Legionella (Figure 2,3).

Table 2: The serotype distribution of the 131 strains of Legionella. 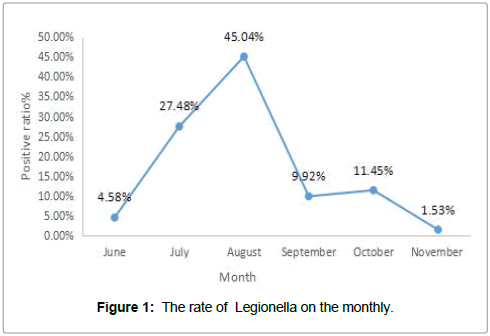 Figure 1: The rate of Legionella on the monthly. Figure 2: The regional distribution of the 131 stains of Legionella; The figure was used the ArcGIS software (version 10.3), the layer is 1:1 million administrative map of Fujian province. 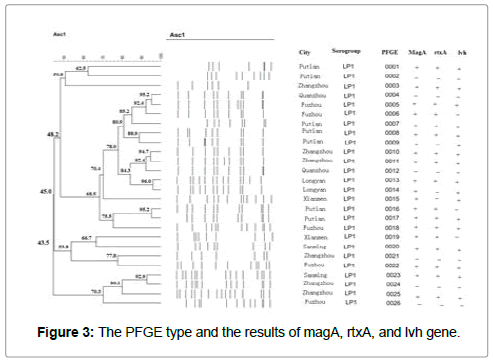 Figure 3: The PFGE type and the results of magA, rtxA, and lvh gene.

With the development of modernization construction, central air conditioning ventilation system has been widely used in public places. But the health problem should be aroused people’s attention. A hotbed of the central air conditioning cooling water is the breeding ground for Legionella, due to the continuous loop filter in the process of gathering a large amount of inorganic salts, organic matter and other nutrients, and has the appropriate temperature (25℃-45℃) and humidity, and is suitable for the growth of Legionella [4,5]. If the cooling tower circulating water contaminated with Legionella, the generated aerosols can carry Legionella through the central air conditioning system of fresh air, doors and windows and ventilation tube to be delivered to the indoor everywhere, such as hotel rooms.

In this study, Legionella detection positive rate was 17.77% (131/887), was lower than other cities in China (Beijing, 52.4%; Shanghai, 58.9%; Hangzhou, 44.8%; Tianjian, 33.3%) [6-9]. The reason maybe that Fujian province had carried out monitoring of Legionella in central air-conditioning earlier from the year of 2008, propaganda to the disinfection of central air conditioning cooling towers. In this study, the results showed that the pollution of Legionella was gradual decline from 31.90% (2008) to 1.00% (2011). But the rate was 26.92% (2013) and 12.97% (2014); the reason may be due to the national youth Games to be carried out in Fujian province, the new large investment in the construction of buildings, more new installation of central airconditioning in the debug. Legionella is a widely exists in the public space environment of facultative intracellular gram-negative bacteria, vulnerable groups after exposure inhalation aerosols containing Legionella can cause Legionella pneumonia or pontiac fever. Spain, Sweden, Japan, Turkey, the United States are reported about the air conditioning cooling water system as a source of infection causing Legionella disease cases of infection [10-12]. To date, about 50 Legionella species have been characterized, and 25 species are known to cause human disease, in Europe and the United States, the Legionella pneumophila serogroup 1 (Lp-1) is accounted for 70%- 90%, but in Australia that only accounts for about 50% [13,14]. In this study, it showed that LP1, LP4, LP5, LP6, LP7, LP8, and LP13 were co-existence with other species, LP1 was the predominately serotype, LP6 (12.21%) and LP7 (10.69%) were rank second to that. The strains accounted for the largest proportion in August (45.04%). Legionella can be checked out all the year round [15,16]. which with the relevant of using the air condition and disinfecting the central air conditioning cooling towers. Legionella pollution is a potential public health risks, should strengthen the monitoring management and risk assessment work.

Gene polymorphism and cloning of sustainability for molecular epidemiology back sends out the theoretical basis of the case or source outbreak and PFGE provides technical means for molecular epidemiology. In this study, 40 strains LP1 were used by AscI enzyme electrophoresis, and gain the size from 20 to 1200 KB of electrophoresis, different strains of stripe number ranged from 6 to 16, according to the similarity of 100%, there are 26 different types PFGE, named A0001-A0026. Most belt type contains only one strain, but in A0006, A0008, A0019, and A0023 were all included 3 strains. A0002, A0005, A0011, A0015, A0016, and A0018 included 2 strains, different strains of similarity coefficient between 43.5%-100%. Most obvious similarity coefficient difference between strains, there is no advantage, visible strain between the more distant relatives, the tip in the central air conditioning cooling water system is separation of Legionella bacteria strains exist extensive genetic diversity.

The pathogenicity of Legionella was mainly through pathogenic bacteria of the genus Legionella intracellular life cycle and virulence island loci, closely related with its virulence carrying case, virulence genes can increase the survival of the bacteria adaptability, is the key to the evolution and its pathogenic bacteria. MagA is virulence island 70 genes in 17th, its coding 20-24 kD protein magA, presumably is an expression of Legionella in late growth of specific protein in cells, to test for the bacteria to grow in the body cells state of useful markers [17,18]. and lvh gene encoding Legionella Ⅳ type A secretion system, and with the icm/dot coded Ⅳ secretion system interaction, through joint action transfer plasmid and strengthen its infectious. rtxA gene encoding an icm/dot regulation holes formed toxin, the toxin in addition to play a role in the process of entering the cell, and adhesion, cell toxicity, pore formation and so on. The lvh and rtxA genes can be used as evaluation index of potential infectious Legionella [19-21].

This study provides baseline data may be used in risk management for Legionella. Supervising of Legionella of the central air conditioning cooling water system and other water system, so the prevention of Legionella bacteria breeding and spreading is one of the best ways to the prevention of legionnaires’ disease. Regularly for the central air conditioning cooling water, ventilation pipe, outlet, such as thorough cleaning and disinfection, to ensure that no pathogenic microorganism pollution.

The authors have no competing interests to declare.

This work was supported by the National Natural Science Foundation of Fujian (no. 2015Y0015) and by the Opening project of Central Laboratory, the 1st Affiliated Hospital, Fujian Medical University. These funding sources played key supportive role for sample collection, molecular analysis of patient samples, bioinformatics analysis. 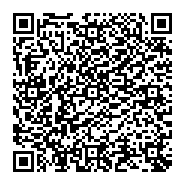