Introduction: Helicobacter pylori (H. pylori) infection in the group of patients with liver cirrhosis may affect the exacerbation of inflammatory injuries in the stomach, which could directly, and indirectly, lead to loss of liver function.
Aim of the study: Assessment of possible relation among H. pylori infection, serum ammonia, and hepatic encephalopathy in the middle of patients with liver cirrhosis.
Patients and methods: This study was conducted in the Hepatobiliary-Gastroenterology Specialized Research Center in Sana'a City Yemen. This is a prospective study and patients from April 2008 to April 2014 were collected. All patients with established Chronic Liver Disease (CLD) with hepatic encephalopathy.
Result:A total of 78 patients with liver cirrhosis included in the present study, there were selected, (n=42; 54%) were males and (n=36; 46%) were females. Clinical and demographic characteristics of the study patients were shown H.E grade had the most significant relationship with H. pylori state (p=0.000). There was a significant relation between stage A, B, C, and H. pylori state (p=0.09).
Conclusion:This study comes to more reliable and confident that is a highly significant association among H. pylori infection, Hepatic Encephalopathy, stage A, B, C, and serum ammonia in cirrhotic patients.

Helicobacter pylori bacteria are rich in the urease enzyme and are recognized to produce ammonia from urea that is fast absorbed from the gastric lumen into circulation. Infection with these bacteria has been shown to be related to elevated blood ammonia levels and repeated attacks of obvious hepatic encephalopathy [1]. The most common biochemical irregularity in patients with chronic Hepatic Encephalopathy (HE) is hyperammonemia [2,3]. Elevated blood ammonia levels have similarly been implicated in the causality of HE [4]. Infection with these bacteria is one of the most common in the world. In highly developed countries, 50% of the population is infected, whereas in the developing countries the percentage reaches as much as 90% [5]. H. pylori infection in the assembly of patients with liver cirrhosis may impact the exacerbation of inflammatory injuries in the stomach, which could directly, and indirectly, lead to deficiency of liver function. This is mainly dangerous in patients with progressive liver disease [6].

In this regard, two theories have been postulated regarding the relationship between H. pylori infection and HE which showed that ammonia has still an essential role in the pathogenesis of hepatic encephalopathy [7]. HE in its numerous grades, according to the West Haven Criteria, is assessed to be present in 30%-45% of individuals with Liver Cirrhosis (LC), while approximately 60%-80% of these individuals show cognitive dysfunction in specified testing. All clinical appearances of HE is considered by the nonappearance of any physical cerebral changes and are possibly changeable by adequate therapeutic management [8,9]. Only a minority of gastroenterologists are prepared to test for HE. In a survey conducted in the USA, 38% of the members of the American Association for the Study of Liver Diseases had never tested for it, although the majority (84%) is aware of the medical problem and the need to test for it [10]. There are only a few data published so far from small prospective clinical studies on the role of H. pylori in subclinical HE, and their findings are inconsistent [11,12]. Elevated levels of ammonia could deteriorate hepatic encephalopathy. As a result, it can be suggested that Helicobacter Pylori infection may possibly contribute to the progress of hepatic encephalopathy [13]. A number of studies showed that ammonia levels both in gastric juice and blood were significantly developed in cirrhotic patients with H. pylori infection than those without [1,14]. The aim of our study was Assessment of possible relation among H. pylori infection, serum ammonia, and hepatic encephalopathy in the middle of patients with liver cirrhosis, and also an assessment of clinical and laboratory characteristics of cirrhotic patients (etiology, age, sex and stage of LC in relation to H. pylori infection.

This study was conducted in the Hepatobiliary-Gastroenterology Specialized Research Center in Sana'a City, Yemen. This is a prospective study and patients from April 2008 to April 2014 were collected. The total number of patients included in this study was 78 patients divided into age groups. They included 42 males and 36 females. According to the etiology of liver cirrhosis, the patients were categorized into the following groups: Group 1: HBV, Group 2: HCV, Group 3: schistosomiasis. Group 4: Autoimmune, Group 5: Idiopathic. Serum ammonia level was expressed as normal (Less than 60 micromol/L) were 10 patients – Mild elevation (60-100 micromol/L) were 38 patients – marked elevation (more than 100 micromol/L) were 30 patients. According to the stage of liver cirrhosis A, B, C, all patients with established Chronic Liver Disease (CLD) with HE. CLD was diagnosed on the basis of the clinical features like finger clubbing, palmar erythema, spider naevi, splenomegaly, hepatomegaly or shrunken liver, or the persistent elevation for more than 6 months of the liver enzymes. Plus a positive abdominal ultrasound for irregular liver margins, coarse liver appearance, and a dilated portal vein > 12mmor). To assess the severity of the liver disease, the patients were scored according to the Child-Pugh classification. This mark is established on the grade of encephalopathy, the existence of ascites, prothrombin time, and the serum levels of bilirubin, and albumin. Accordingly, the patients had either compensated liver disease (Class A, 5-6 points), moderate liver disease (Class B, 7-9 points), or severe liver disease (Class C, 10-15 points).

Diagnosis of viral etiology based on Hepatitis B surface antigen/ Hepatitis C Virus (HBsAg/HCV Ab PCR while Autoimmune depends on sever sero immune markers – ve viral marker hypergamaglobulinemia response to immunosuppressive therapy Schistosomiasis a liver disease depend on the sch.Ag, rectal snip. Whereas idiopathic CLD based on –ve viral, autoimmune markers, -ve evidence for schistosomiasis normal metabolic or even a liver biopsy. Assessment of HE was clinically as well as psychometric test diagnosis of H. pylori infection was made by stool Ag, Universal Backup Tool (UBT), Endoscopy with clo test or biopsy histopathology.

Fasting venous blood samples were obtained from each patient to measure ammonia concentration (micromole/L), according to the manufacturer's instructions.

All Yemeni patients with liver cirrhosis complaining of manifestations suggestive of hepatic encephalopathy whatever the grade. These patients are suffering from liver cirrhosis of different stages and due to different etiologies.

Data were stored and analyzed by the statistical program, Statistical Package for the Social Sciences (SPSS) Version 16. All the quantitative variables corresponding age, blood ammonia levels, and so out were analyzed for mean+standard duration. Frequencies and proportions were calculated for the quantitative variables like gender, Child-Pugh grade (CP grade). Hyperammonemia was stratified amongst disease severity grade (CP grade) to see effect modification. Statistical significance was established at p value<0.05 was taken as a criterion standard. 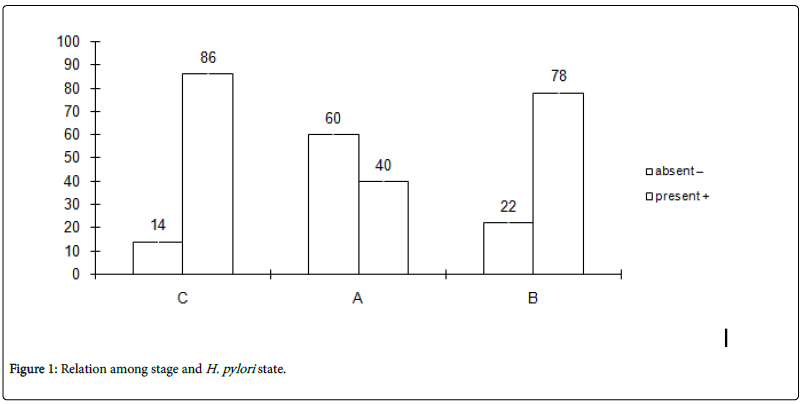 The pathogenesis of H.E is still poorly understood, but raised systemic ammonia concentration as a consequence of shunting of ammonia-rich portal blood away from the liver and impaired urea genesis have long been causally implicated in its development. H. pylori urease activity in the cirrhotic stomach has been proposed to represent a significant source of ammonia, contributing to the development of H.E. This study showed patients were H.E grade the most significant relationship with H. pylori state (p=0.000). Another study by DR. JAHANGIR LIAQUAT(15) et al. found the H. pylori was observed to be rising with the severity of hepatic encephalopathy [15]. Similarly, the study by El-seida [16], et al. exposed a highly significant association between H. pylori infection and MHE in cirrhotic patients [16]. 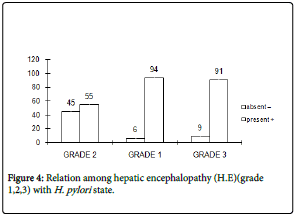 For our colleagues Professor Dr. Mansour A. Al-Amrani, PhD. of Hepatology and Gastroenterology, Faculty of Medicine in Sana'a Yemen. The authors would like to thank the professor. Dr. Xiao Jian. Clinical Pharmacology from Wenzhou Medical University, Wenzhou Zhejiang Province, PR China who helped in arranging this paper for publication.

A statement is declared for no conflict of interest.