The Reversal of Self-Poisoning in Bronze and Albino Corydoras

Objective: Corydoras can self-poison when threatened, a common feature of many species of Corys, which enables them to deliver poisonous mucus from their gills causing surrounding fish to expeditiously die. The process of self-poisoning causes tremendous stress on the Corydoras, often resulting in death. This study focuses on the process of self-poisoning and insight into its reversal in Bronze and Albino Corydoras. Methods: In this study, a hospital tank is filled with 10 gallons (37.9 L) of water with 1 teaspoon of garlic extract mixed in. The water has a pH ranging from 5.8-7.0, a temperature range of 72ºF -79ºF (22ºC -26ºC), and calcium and magnesium levels between 2 dGH -30 dGH. The Corydoras are then submerged for 60-180 seconds depending on the time of reaction while receiving compressions. Results: Every Corydoras that underwent the procedure was able to regain body function within 120 s-180 s. The Bronze Corydoras (144 s) were able to make a quicker recovery compared to the Albino Corydoras (165 s). The increase in pH, calcium, and magnesium level combined with a decrease in the temperature of the water noted between procedures can be attributed to the toxins released from the Corydoras. Conclusion: Both the Bronze and Albino Corydoras were able to make a miraculous recovery from self-poisoning using garlic baths. Knowing that there is a reversal for this self-defense mechanism is groundbreaking and reassuring to marine biologists and aquarium hobbyists. Having the ability to reverse self-poisoning opens the door to save the lives of many Corydoras.

Discovered in 1758 and originally named Silurus Callichthys by Carl Linnaeus [1], the Callichthys callichthys calls the majority of the countries in South America home. Located within the major river drainages such as the upper Amazon River and Paraguay River systems, the Callichthys are known for their armored scales that can grow up to eight inches. Females tend to be larger with more of a monotonous olive-green color and underdeveloped pectoral fin spine, while the males display a light blue gleam and an evolved reddish- brown pectoral-fin spine. During reproduction, the male’s stomach transitions to an orange shade, and his pectoral spines extend longer and thicker. The males are responsible for building a bubble nest with floating plants and guarding it after the female lays her eggs [2].

Callichthys have the ability to live in a wide variety of water environments, ranging from slump water zones that border heavy vegetation to calm flowing streams [2]. Callichthys survive in waters with a pH range of 5.8-8.3, temperature ranging from 64°F-83°F (18°C-28°C), and hardness of 0-30 dGH [1]. Normally peaceful nocturnal fish, Callichthys feed at night on plant matter, fish, and insects [1]. Callichthys also have the inexplicable ability to survive for extended periods outside of water by swallowing air and using its intestines to absorb oxygen, giving it time to find more water [2].

The first Corydoras, the genus in the family of Callichthys, was discovered by Charles Darwin while visiting Buenos Aires during an expedition in the 1830 s and was introduced to the world in 1842. Subsequently, the Bronze Corydoras, shown in Figure 1, is a species in the Corydoras genus that were discovered to be scattered throughout South America, specifically on the eastern side of the Andes, Trinidad, and the shallow waters of the Rio de la Plata basin [2]. This distribution is exhibited in Figure 2. Initially pronounced Hoplosoma Aeneum by Theodore Gill in 1858 and eventually renamed as Callichthys aeneus [2], the Bronze Corydoras are well known for their armor-like exterior, ability to self-poison in life-threatening situations, and vibrant personalities that can light up any freshwater aquatic habitat [3]. The adult size for females is 7 cm with a somewhat larger abdominal region while the adult males are a moderately smaller size of 6.5 cm [4]. For most Corydoras the pectoral, adipose and dorsal fins tend to have a supplementary sharp barb that contains mild poison used as a self-defense mechanism [5]. 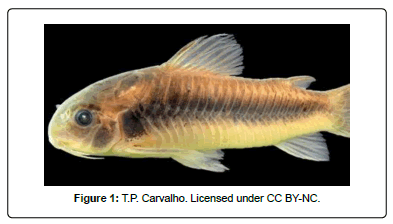 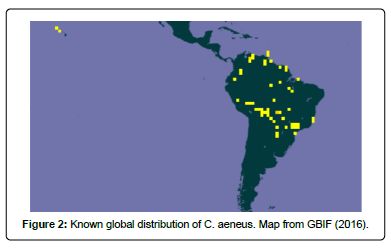 The Albino Corydoras, shown in Figure 3, is another species in the Corydoras genus and is a variation of the Bronze Corydoras that advanced through the aquarium trade. They tend to display a pale pink body with red eyes. The fact that these Albino Corydoras are specifically bred for the commercial ornamental fish trade renders them blind as they are commonly injected with a bright red dye. This contentious practice is known as “painting” fish. Albino Corydoras take part in a peculiar mating behavior with the female attaching herself to the male’s underside and drinking his sperm to fertilize [6]. 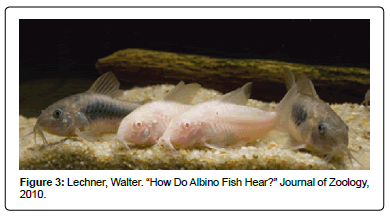 Studies done on the Callichthys family has shown their venom to be neurotoxic and hemolytic [5,7]. Histological study of the Corydoras aeneus has demonstrated that there are paired tubular axillary glands that open near the first pectoral gland that is responsible for this toxic venom [8]. This venom, released when the fish is under stress, is the reason why many Corydoras perish leaving aquarium hobbyists and researchers helpless in their efforts to save the animal. This study is designed to discover if there is potential detoxification of this venom, which to date has not been studied.

Garlic contains many curative properties that include but are not limited to antibacterial, anti-parasite, anti-fungal, and anti-viral. Garlic is often used in aquariums to boost immune support to control and prevent illnesses [9]. In this experiment, a hospital tank filled with 10 gallons (37.9 L) of water with 1 teaspoon of garlic extract added was used [9]. Caution, using too much garlic possibly may irritate the Corydoras’ mucus membranes and may cause anemia due to ironbinding [9]. The aquarium must also contain highly oxygenated water by using an air bubbler.

A hospital tank is filled with 10 gallons (37.9 L) of tank water with pH ranging from 5.8-7.0, a temperature range of 72°C-79°C (22°C-26°C), and calcium and magnesium levels between 2 dGH to 30 dGH. 1 teaspoon of garlic extract is then mixed into the water [4]. The Corydoras will be submerged for one to three minutes depending on the time of reaction while receiving compressions [10].

To produce the garlic extract to be added to the hospital tank, one must first obtain garlic cloves. 1 pound of garlic cloves will roughly produce 1 gram of garlic extract. First, peel the garlic to remove the protective sheaths. Next, place the shaven garlic into a garlic press. The output of the press is then placed into a food processor and pulsed until the oil separates from the solid garlic. This oil is isolated via a strainer. 1 cup of olive oil is mixed in with this highly concentrated extract and left to marinate for 24 hours. 3 drops of this mixture are then added to the hospital tank each time the water is changed.

Before the procedure can begin the pH, calcium, and magnesium, and temperature are measured. These measurements are expected to fluctuate as the Corydoras are exposed to toxins in the hospital tank water from previous Corydoras. The rule is, the hospital tank water must be replaced after two Corydoras have gone through treatment to eliminate the toxins without exposing others to higher toxicity levels. In this experiment the water was changed after Bronze Corydoras 2 and 4, and after Albino Corydoras 1, 3, and 5.

Once the Corydoras has entered a frozen state [4] after selfpoisoning, quickly remove the Corydoras from its original tank and place it in the hospital tank that has the garlic extract added. This is identified when the Corydoras’ armor scales completely harden. In this frozen state, it’s heart will stop resulting in no blood flow through the animal. As a result, chest compressions must be done to restore blood flow and ensure that the garlic water is absorbed, the key element in detoxification [11]. Compressions are done by laying the Corydoras on its’ side and ensuring that there is a strong but gentle grip. Going behind the gill and moving slightly forward, allows easy identification of the heart and ensures correct placement of the gentle but firm compressions. The time between the identification of the frozen state and the regain of body function was recorded.

As mentioned previously, the hospital tank water was changed after the completion of two procedures. As a result, the second Corydoras was exposed to the chemical environment left by the previous fish. Comparing the water environment displayed in Tables 1 and 2 shows that there is an increase in the pH as well as the calcium and magnesium level with a decrease in temperature after a Corydoras has undergone the procedure. The averages of the new water were a pH was of 6.08 (range: 5.9-6.2), calcium and magnesium level of 17.4 dGH (range: 12 dGH-23 dGH), and temperature of 77°F (range 76°F-78°F). The averages of the unchanged water after 1 Corydoras had undergone the procedure were a pH of 6.48 (range: 6.2-6.8), calcium, and a magnesium level of 23.2 dGH (range: 17 dGH-29 dGH), and a temperature of 73.4°F (range: 72°F-75°F).

Table 2: Procedures after 1 Corydoras has completed the procedure and before new tank water was introduced.

Table 3: The difference in pH before and after changing the tank water between procedures. 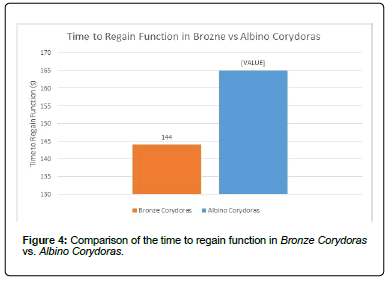 Figure 4: Comparison of the time to regain function in Bronze Corydoras vs. Albino Corydoras.

The increase in pH as well as calcium and magnesium level with a decrease in the temperature of the tank water in between water changes can be contributed to the toxins released by the Corydoras during self-poisoning. The toxin greatly alters the aquatic environment surrounding the fish as it fulfills its purpose of poisoning predators. This harsher environment can also be assumed to be the reason why the second Corydoras in the tank water takes longer to regain normal body function. The toxins leftover from the previous Corydoras combined with the toxins from the second fish creates a harsher environment that is more difficult to recover from. There is no way to measure the level of toxin present in the fish, however, analyzing the shift in pH between procedures demonstrates a greater decrease after an Albino Corydoras had undergone the procedure. It can, therefore, be assumed that the Albino Corydoras has a greater toxin load produced.

Every Corydoras that underwent the procedure of garlic-infused water combined with chest compressions recovered from selfpoisoning. This indicates a potential reversal of this process. The garlic extract is key to detoxifying the potent chemicals produced by the Corydoras. The chest compressions are also vital to ensure that the garlic extract can gain access to the fish. When examining the difference in time to regain function, the Bronze Corydoras on average regained function quicker than the Albino Corydoras. One potential explanation for this is that Albino Corydoras are a result of selective breeding, as such they tend to develop at a slower rate compared to Bronze Corydoras [12].

This study does have some limitations. First, to the author’s knowledge, this is the first study of its kind looking at reversing selfpoisoning in Corydoras. As a result, there is no data to compare and contrast. Next, the sample size is small. This procedure, while effective for this cohort, will need to be examined on a larger scale to demonstrate reproducibility.

Using garlic baths both Bronze and Albino Corydoras were able to make a miraculous recovery from self-poisoning. Knowing that there is a cure for this self-defense mechanism is groundbreaking and reassuring to marine biologists and aquarium hobbyists. Having the ability to revive and reverse the self-poisoning process opens the door to save the lives of many Corydoras. 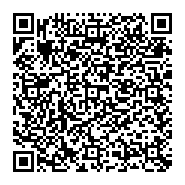