The main objective of the paper is to examine the trends in Economic Growth for Nebraska for the period 1988-2018. The study is presented in four sections. In the first section a brief profile of Nebraska is given. The second section is a short review of literature related to the state’s economy. Methodology and sources of data comprise section three. The focus in the fourth is on results and analysis.

In the late 1600’s, French fur traders first visited Nebraska and fought with Spain over control of the territory. In 1803, the United States obtained part of what became Nebraska through the Louisiana Purchase [1].

Agriculture is the largest land user in Nebraska – the state is a major producer of beef, pork, corn (maize), soybeans, and sorghum. Other important economic sectors include freight transport (by rail and truck), food manufacturing, telecommunications, information technology, and insurance (Figure 1). Much of the nation’s rail traffic passes through the Union Pacific’s giant Bailey rail yard near North Platte. Two major financial firms that call Nebraska home are Berkshire Hathaway and Mutual of Omaha. In 2017, Nebraska ranked as the 34th safest state (see: Wallethub.com). 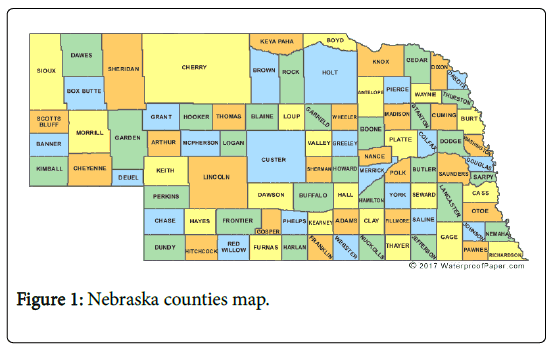 Wind is a growing energy source in Nebraska. In 1999, Nebraska had 3 megawatts (MW) of installed wind power capacity but, by July 2018, there were 1,452 MW of installed capacity, an increase of over 48,000 percent. According to the American Wind Energy Association, in 2013, Nebraska ranked fourth in the nation for wind power potential. There are many environmental and economic benefits to wind power. A 200 MW wind farm generates approximately $1,325,200 in property tax revenue annually (Tables 1 and 2). This would also include cumulative economic benefits of $1.1 billion, some 4.1 million tons in reduced annual CO2 emissions, and an annual water savings of 1,840 million gallons. The University of Nebraska- Lincoln also states that increasing wind production by 20% would create approximately 3,100 long-term jobs, 25,000 temporary jobs, and increase property tax revenues by $31 million annually.

Nebraska is a leading producer of sorghum, corn, and wheat. More varieties of grass, valuable for forage, grow in this state than in any other in the nation [2]. Manufacturing has diversified some in recent years. Firms making electronic components, auto accessories, pharmaceuticals, and mobile homes have joined older industries such as clothing, farm machinery, chemicals, and transportation equipment manufacturing. Oil was discovered in the state in 1939 and natural gas in 1949.

In this section, a brief review of a few selected studies pertaining to Nebraska’s economy is presented (Table 3). “Farm incomes have been driven down over the last four years and are expected to bottom out in 2017, ” said Eric Thompson, director of the Bureau of Business Research. “ Weakness in its largest sector will cap growth in the Nebraska economy, despite strong performances in select sectors like construction and business services.” The Nebraska Business Forecast Council echoed these comments. Farm income is projected to rise nearly 4% in 2018 and more than 7% in 2019 mostly as a result of improved productivity. The forecasters say they do not expect a rebound in crop prices. The outlook for farm income contrasts with the good news that non-farm income is expected to grow by an annual average of about 4% during the next three years – exceeding both population growth and inflation. Job growth will hover around 1% a year.

Policy insights from the Kansas City Fed are reported below.

Nebraska’s economy has remained relatively strong, but recently growth has been slower (Chart 1). Measures of economic output and employment growth both slowed through 2017, alongside historically low levels of unemployment. Tightening labor markets have likely contributed to some of the recent slowdown but wage gains in Nebraska also accelerated. Though unemployment has remained low across the state, economic activity in rural areas has continued to weaken alongside persistently low agricultural commodity prices [3]. 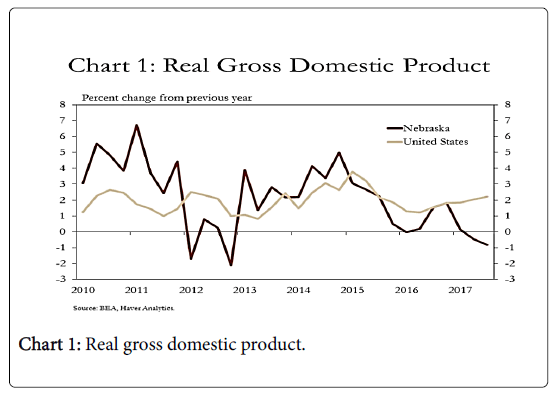 Unlike the country as a whole, rural Nebraska accounts for a relatively large share of the state’ s economy. Omaha and Lincoln account for about two-thirds of the state’s economic activity, but nonmetro regions in Nebraska accounted for nearly 30% of GDP in 2016 (Charts 2 and 3). Nationwide, non-metro areas only account for about 10% of total economic output. Compared to the nation, then, economic growth in Nebraska is significantly more reliant on the economic health of its rural areas. 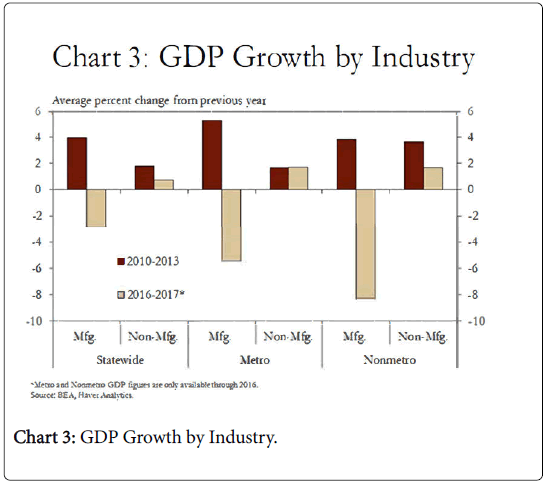 Most of the graphs presented below shed light on various aspects of the trends in economic growth for the Nebraska economy and are taken from the Kansas City Fed study.

This study sheds light on Nebraska growth rates and the contribution of the different industrial sectors to the state’s GDP. Simple regression analysis is used to analyze the trends in economic growth and the performance of the economy.

Where Log Y is the dependent variable and T is the time trend.

In this section, the results obtained from using the tools described in the methodology section are presented and analyzed. The following charts (Charts 4 and 5) represent the performance of various industrial sectors in Nebraska for the periods 1977 to 1997 and 1997 to 2017 (w.r.t. note 1). 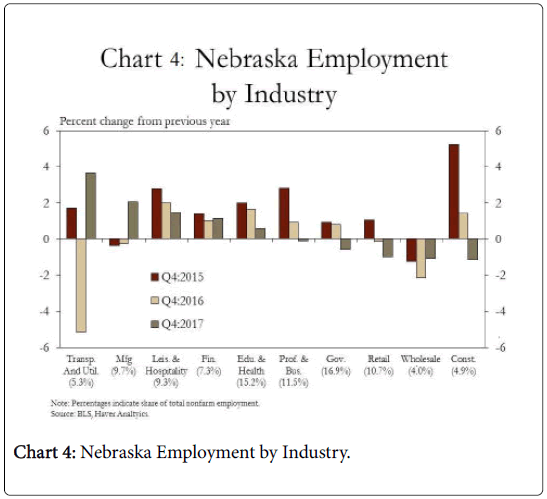 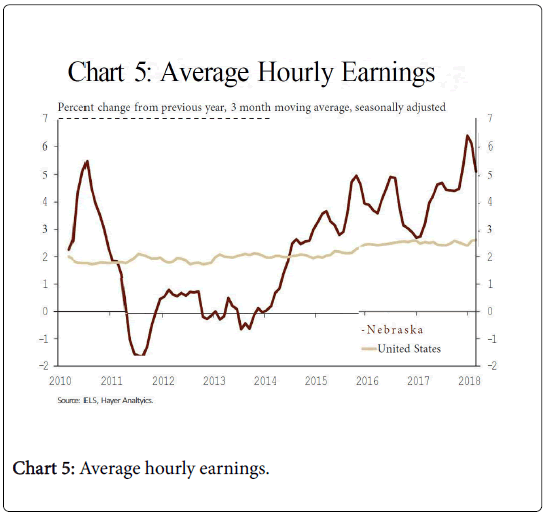 Chart 6 shows that Services had the highest value and most consistent growth trend of the three sectors from 1977 to 1997. Annual manufacturing GDP exceeded that of the Agriculture sector [4-6]. While the Services and Manufacturing sectors grew consistently throughout the period, agriculture stumbled during the later years – from 1992 to 1997. 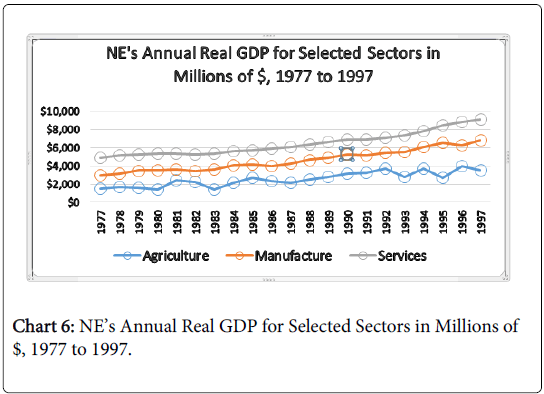 Note 1: The time periods present two versions of GDP numbers by industry. The first presents the GDP by industry based on SIC codes; the second presents the GDP values by NAICS code. So, we cannot generate a continuous time series from 1977 to 2017 because we’d be comparing “apples and oranges,” but we can make rough comparisons of selected industry growth rates for the two periods.

Much of the contraction through 2002 is explained by falling prices for agricultural products between 1997 and 2002.

Observing the graph in Chart 6, it is seen that Services depicted higher and consistent increases in Agriculture followed by Manufacturing sector and then Agriculture sector.

Overall, the Services’ Sector depicts higher and consistent increases, followed by the Manufacturing and the Agricultural sectors.

Although the GDP in the Agricultural sector also depicts an increasing trend over time, it does fluctuate over time. The greatest increase is observed in 1981 (69.47 %), and the greatest decrease in 1983 (-39.67 %).

A similar trend is seen for the period 1997 to 2017 with the difference that the Finance sector has been substituted for Services (Chart 7). It has the highest values followed by Manufacturing, Professional services, and Agriculture (w.r.t. note 2) 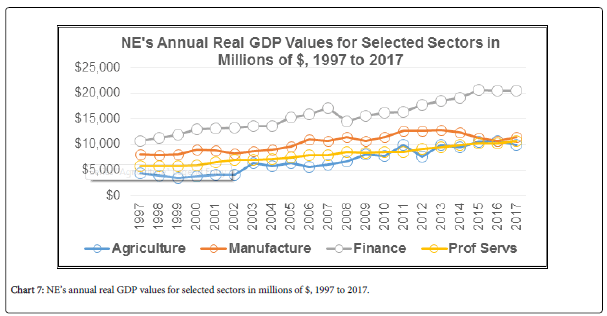 Note 2: The fact the data are divided into two time periods with different industrial categories means we can’t strictly compare the specific industries.

The results obtained by fitting a simple semi-log model are presented in Tables 4.1 and 4.2. For the study periods, the individual growth rates reveal a different pattern than indicated by the preceding charts. The Agriculture sector has the highest growth rate in both periods and grew faster in the second period than in the first – 2.5% compared to 2.0%. All the coefficients are significant, and the Rsquared statistic yielded high values.

Regressing the log of total private GDP on the logs of the three sectors yielded the following growth coefficients.

Table 5 below shows that Agriculture did not demonstrate much difference in the growth rates between the two periods. For the Manufacturing sector, there was improvement in that low growth rates from the earlier period were replaced by a significant growth rate in the second. Services showed a significant growth rate in 1977 to 1997 period. For the period 1997 to 2017, the data for services were unavailable. Finance and Professional services were substituted and considered separately in the equation. Except for the Manufacturing sector in 1977 to 1997 and services in 1997 to 2017, all the coefficients were significant. R-squared yielded high values at .996 and .943, respectively, for the periods 1977 to 1997 and 1997 to 2017.

From 1977-1997, the services sector has been contributing the most to the total of All industry, with an average of an annual average of 17.19%, followed by the manufacture sector with 12.25% and by the Agri, Forestry and Fishing with 6.81%.

Compared to the previous period (1977-1997), the sector of Finance, Insurance, Real Estate, Rental and Leasing has been dominating and contributed the most to the total for all industries, with an average contribution of 16.96%, followed by Manufacture with 11.18 %, Profess and Bus, services with 8.63%, and the agricultural sector [7].

Regarding foreign trade, the analysis was done only for 2008 to 2018 because the data for imports is available only after 2008. Chart 8 suggests that Nebraska has a favorable balance of trade with exports much higher than imports (w.r.t. note 3). 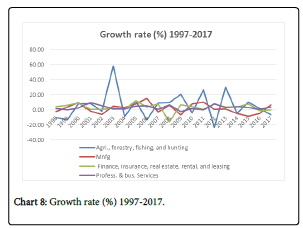 Note 3: Strictly speaking you cannot calculate a state balance of trade using state level imports and exports, because the Census Bureau, which calculates state imports numbers, does not know whether all the imports it attributes being shipped to a particular state are used in that state or are shipped elsewhere after stopping in a state.

In addition, Chart 9 shows Nebraska exports as a percentage of Total Private GDP – it can also be considered a partial Index of Openness [8]. The export share of total GDP increased from 4.48% in 1999 to 6.90% in 2017 (Charts 10 and 11). Nonetheless, Nebraska’s economy is not highly dependent on international markets [9]. 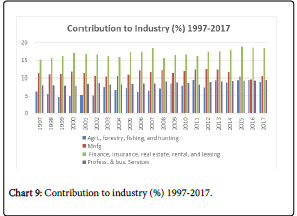 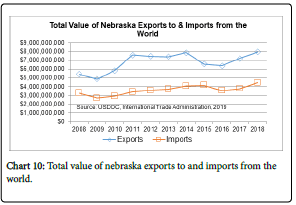 Chart 10: otal value of nebraska exports to and imports from the world. 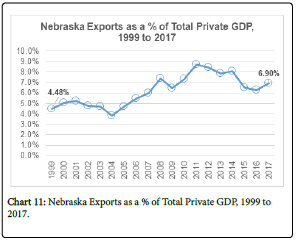 The analysis reveals that Agriculture did not show much difference in the growth rates for the period’s 1977 to 1997 and 1997 to 2017. For the Manufacturing sector there has been some improvement in that low growth rates from the earlier period became significant growth rates in the later period. Services exhibited a significant growth rate in the 1977 to 1997 period. For the period 1997 to 2017, the data for comparable services were unavailable, so Finance and Professional services were substituted for it but considered separately in the equation. Except for the Manufacturing sector in 1997 to 2017, all the coefficients were significant.

As pointed out in one study “One of the signs for a strong economy is (a) low unemployment rate. However, the two factors of tightening labor markets and a weak agricultural economy may limit the potential for maintaining the growth of previous years. As the prices for most agricultural commodities in Nebraska have remained low, industries connected to agriculture such as manufacturing have weakened over the past two years. Limited supply of labor had a positive impact on workers who enjoyed higher wages and wage gains in the state have outpaced recent increases in the average prices of goods and services.

Hence Nebraska households appear to be in a relatively stronger financial position with solid job opportunities.”