Ventricular Repolarization in Patients with Decompensated Liver Cirrhosis and its Relation to the in-Hospital Outcome: Electrocardiographic Study

Methods: We retrospectively studied 75 patients with hepatic encephalopathy. The QTc interval was measured in a 12-lead electrocardiogram obtained on admission.

Results: Patients were divided into two groups according to their clinical outcome during hospitalization. The first group included 53 (70.7%) patients who survived, and the second group included 22 (29.3%) patients who died. QTc interval was significantly prolonged in died patients than patients who survived (p<0.001). There was insignificant difference between two groups regarding age, sex, smoking status, hypertension, diabetes mellitus and basal laboratory findings except for serum creatinine level (p = 0.006) and MELD score (p = 0.033).

A prolonged QT interval was previously encountered in chronic liver disease [1,2]. Hepatic encephalopathy (HE) is a serious condition of decompensated liver cirrhosis that presents as a wide scope of neuropsychological clinical states ranging from negligible encephalopathy to coma. In patients with liver cirrhosis, hepatic decompensation in the form of HE is associated with shorter survival [3]. Interactions between the heart and the liver have been delineated. Affects on the cardiovascular system in advanced liver disease are perceived in the form of left ventricular hypertrophy, impaired diastolic filling, chronotropic inadequacy, pulmonary hypertension, decreased vascular resistance, and cardiac arrhythmias. The term cirrhotic cardiomyopathy describes these changes in the heart; they are related to both histological and fibrotic changes and contribute to risk of electrical heterogeneity and arrhythmia [4-6].

The relationship between cardiac structural heterogeneity and cardiovascular events in patients with liver cirrhosis was studied in some post-mortem research that described edema in the subendocardium, patchy fibrosis in myocytes, and myocardial hypertrophy [7].

Aim of the study

The aim of this work was to study the electrocardiographic QTc interval in patients with decompensated liver disease and its relation to the in-hospital outcome.

A retrospective, observational study was conducted to 75 patients (44 male and 31 female) with decompensated liver disease who were admitted to Banha University Hospital, Egypt, from November 2014 to February 2016. The study populace was orderd into two groups as indicated by their clinical outcome during hospitalization. The first group included patients who survived, and the second group included patients who died. The two groups of patients were retrospectively evaluated. The study followed the principles of the Declaration of Helsinki and and was approved by our research committee. Consent was obtained from patients who survived and permission from patients’ relatives for those who died. The study excluded patients who had baseline changes in their resting electrocardiograms as left or right bundle branch block, pre-excitation disorders, atrial fibrillation, atrioventricular heart block, and pacemaker musicality. Also we excluded patients with a history of ishemic heart disease or revascularization, heart failure, and patients who received any medications that affect QT interval.

A hepatologist obtained the diagnosis of liver cirrhosis and grading of HE for each patient according to the West Haven classification system, from grade 0 to 4 [9].

The following diagnostic tests were analyzed:

Cardiofax C ECG–1150 machine was used to record 12–lead ECGs on admission at speed of 25 mm/s and 1 mV/cm calibration. Heart rate, PR interval, and QRS time, and QT interval were measured. QT interval was surveyed as the time between the principal redirection of the QRS complex and the purpose of return of the T wave to the isoelectric line. QT intervals were measured in leads where it was plainly recognizable, while patients with U waves, flat, or biphasic T waves were excluded. QT interval corrected for heart rate (QTc) was figured by separating the QT interval in seconds by the square base of R-R interval in seconds [11] (Figure 1).

The relationship between mortality as dependent variable and QTc intervals, MELD score and serum creatinine as independent variables was decided by Multivariate logistic regression analysis. Results are reported as odd ratio (OR) (95% confidence interval [CI]). P value less than 0.05 was viewed as significant.

Spearman coefficient was utilized to relate between quantitative factors. Receiver operating characteristic curve (ROC) was utilized to decide the demonstrative execution of the markers. Range over half gives adequate execution and zone around 100% is the best execution for the test. Centrality of the acquired outcomes was judged at the 5% level.

The study cohort consisted of 44 males (58.7%) and 31 females (41.3%) with a mean age of 56 (44–67) year presented with decompensated liver cell failure in the form of HE. The etiology of liver cirrhosis was chronic hepatitis C in 69 (92%) patients and chronic hepatitis B in 6 (8%) patients. The subjects were ordered into two groups as indicated by their clinical outcome during hospitalization period. The first group included 53 (70.7%) patients who survived, and the second group included 22 (29.3%) patients who died. The two groups of patients were retrospectively evaluated. 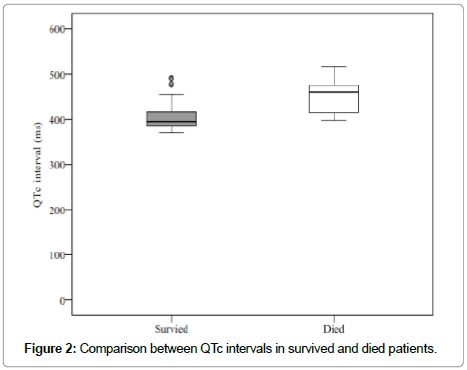 Figure 2: Comparison between QTc intervals in survived and died patients.

Table 1: Comparison between the two studied groups according to patient characteristics, electrocardiographic and echocardiographic data. 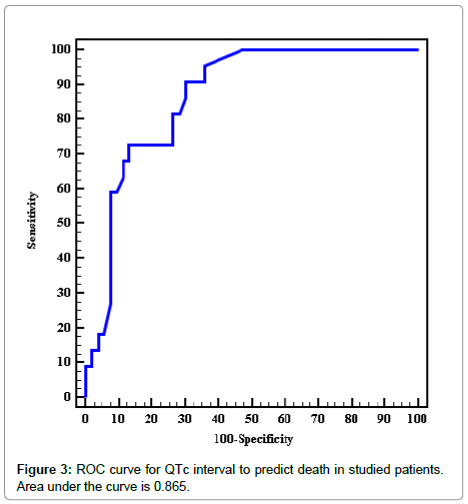 Figure 3: ROC curve for QTc interval to predict death in studied patients. Area under the curve is 0.865.

Table 4: Correlation between QTc with different parameters in all patients.

Cardiac abnormalities have frequently been seen in patients with chronic liver disease, and the extent is proportionate to the extent of hepatic cell failure. These abnormalities are detected in the absence of preexisting cardiac diseases. They include increased left ventricular wall thickness, impairment of diastolic function of the heart and sometimes also the systolic function, chronotropic incompetence, and disturbance of the electrophysiological regulation of the heart with alteration of ventricular repolarization and subsequent electrical instability and arrhythmic risk [12].

The authors reported prolonged QTc interval obtained at the time of admission in patients with who died, as compared to patients who survived. The current study showed QTc interval cutoff value > 410 ms had sensitivity of 81.82% and specificity of 71.70% to predict in-hospital mortality (P< 0.001).

Mozos et al. reported that the degree of liver disease in addition to alcoholic etiology was associated with an increased QT interval in patients with liver cirrhosis [16]. Moreover, prolonged ventricular repolarization as assessed by QT interval may initiate life-debilitating arrhythmias amid stressful situations in patients with chronic liver disease, like bleeding, and it was found to be a predictor of poor prognosis [17].

The results of this study agree with Akboga et al., who showed a significant relation parallel of QTc interval with the seriousness of the liver cirrhosis represented by Pugh–Child and MELD scores. However, he also detected a significant association between the seriousness of liver and fragmented QRS among patients, but we didn’t report this , which could be explained by the smaller number of our study in comparison with Akboga et al. in addition, he involved patients with alcoholic liver cirrhosis as an etiology and we didn’t [18].

Bernardi M, et al. suggested role of sympathoadrenergic hyperactivity in prolongation of QT interval in patients with liver cirrhosis irrespective of the etiology, and may have a prognostic significance [19].

This research did not receive any specific grant from any funding agency in the public, commercial or not-for-profit sector.