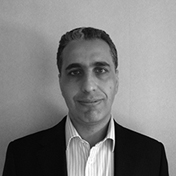 Professor Kefah Mokbel MS, FRCS specialises in the diagnosis and management of diseases of the breast, including breast cancer and cosmetic breast surgery. He is currently the Lead Breast Surgeon at The London Breast Institute of The Princess Grace Hospital and Consultant Breast Surgeon at St. George’s Hospital in London. He is also Professor of Breast Cancer Surgery (Honorary) at The Brunel Institute of Cancer Genetics and Pharmacogenomics. He was named one of Tatler magazines "Top Breast Surgeons" in their 2006 and 2007 Best Doctors Guide.
He graduated from the University of London in 1990. After four years of basic surgical training at London teaching hospitals (the Royal Marsden, Charing Cross, and the Chelsea and Westminster Hospitals), he qualified as a Fellow of the Royal College of Surgeons (FRCS, England) in 1994. His higher surgical training in breast surgery was carried out in London (St. Mary’s and Barts, and The Royal London Hospitals). In 2000 he completed his accreditation and gained the certificate of completion of specialist training in general surgery with a special interest in breast and endocrine surgery. In 2000, he was also granted the Master of Surgery (MS) degree by The Imperial College of Science, Technology and Medicine for his research in the field of molecular biology of breast cancer. Following this specialist accreditation, he was appointed as a Consultant Breast and Endocrine Surgeon to St. George’s Hospital, and an Honorary Senior Lecturer in Surgery. In 2002, he was appointed a Professor at The Brunel Institute of Cancer Genetics and Pharmacogenomics (Brunel University, London, UK) in recognition of his contribution to breast cancer research. In 2005, he was appointed as a Reader in Breast Surgery at St. George’s University of London in recognition of his outstanding research contribution in the field of breast cancer.