The effective elastic properties C of a random heterogeneous medium can be presented in terms of average value C and the fluctuation C . In such medium, the amplitude of spatial correlation function will have non-zero value because the inclusions and matrix will have different elastic properties of. The higher contrast between the inclusions and host rock, the higher will be the amplitude of the spatial correlation function, and viceversa. The heterogeneities having smaller and larger slowness are characterized by positive and negative normalized fluctuation, respectively. Theoretical modeling results, based on normalized fluctuation of traveltime slowness, to detect seismic heterogeneities in 3D random media is shown. We have used the radius of the spatial correlation function to calculate the extension of the inclusion in X-, Y- and Z-direction to demarcate the shape of heterogeneity. Upscaling of the physical properties of the medium is performed to calibrate the result to the seismic frequency range by changing the averaging window size. The properties of the medium inside the averaging window are assumed statistically homogeneous. Results obtained from this method show that as the size of the sliding window decreases the resolution of the heterogeneity increases.

Intrinsic attenuation and scattering are the two main causes of the seismic attenuation. In an attenuating medium, scattering and intrinsic attenuation affect differently depending upon the size of the heterogeneity and the wavelength of the propagating wave and therefore, a medium becomes frequency dependent. The traveltime of seismic wave will be the reflection of the medium through which the wave has traveled. In a heterogeneous medium, each seismic trace is supposedly unique because it travels through unique path and reflects the characteristics of the medium through that path. The information of the medium imbedded in the seismic traces can be deconvolved as seismic attributes which can be used for reservoir characterization.

During the last five decade, exploration geophysicists have come up with more than fifty seismic attributes which have been applied to reservoir characterization. Bahorich and Farmer [1] analyzed the similarity of the adjacent waveforms in inline and crossline direction. They used cross correlation technique on adjacent traces to compute coherence coefficient from the seismic amplitude, and any changes in the nature of the traces was attributed to the seismic heterogeneity or discontinuity. Three traces cross correlation algorithm was modified with the introduction of semblance and eigendecomposition based coherence estimate [2-4]. Another well-known seismic attributes to delineate seismic heterogeneity is spectral decomposition which uses short-window Fourier transform to compare seismic waveform to precomputed waveform [5,6]. Seismic attributes analysis is based upon the concept to find: why the nature of one seismic trace is different than others and finding out geological and geophysical reasons which may have attributed to these differences.

Velocities and their attenuation are two fundamental properties of the wave propagation that provide information about the saturation and structure of in situ rocks [7]. In a random heterogeneous media where size of the heterogeneity exceeds the wavelength of the seismic wave, scattering attenuation becomes more pronounced [8]. The seismic velocity changes are generally related to the physical properties of the reservoir rocks, such as lithology, differential pressure, temperature, fluid saturation, fluid viscosity, frequency and fluid mobility [9-15]. The influence of frequency on the seismic wave propagation in elastic media and porous media is studied by Mukerji and Mavko [16] and Vikhorev et al. [17], respectively.

We have used statistical approach to characterize heterogeneous reservoir using the concept of normalized fluctuation; and the radius and amplitude of the spatial correlation function, to delineate small and large scale heterogeneity. The question arises how the velocity should be treated in order to determine the location and size of fault or karst. In this work we suggest some characteristics derived from 3D seismic data, which are helpful in solving the problem. Application of normalized fluctuation, and correlation function amplitude and radius to detect heterogeneity is rarely available in literature.

Sedimentary rocks, with few exceptions, are characterized as heterogeneous media whose physical properties changes from one point to other in space. A geologic formation is not composed by a single material but consists of a collection of different materials. Such heterogeneous composition occurs in many geological media where depositional processes that act over different characteristic time scales induce spatial patterns with different characteristic spatial scales. Commonly, a region having properties different than its adjacent region is called a heterogeneous system (Figure 1a). In sedimentary rock, lateral heterogeneities are generally related to the depositional environment. But in some cases the lateral heterogeneities might occur due to vertical throw of the faulted block across the fault plane (Figure 1b) or fault plane (Figure 1c). Heterogeneity associated with porosity, permeability, pore fluid properties, and conditions of pore pressure, temperature, and stress are generally post depositional, whereas lateral heterogeneities are caused by variations in the lithology due to facies change are syn-depositional in nature. Some other large scale post depositional heterogeneity, such as fold, fault can develop due to regional tectonics whereas development of karst is the result of dissolution of carbonate rock such as limestone and dolomite.The size of the heterogeneity can vary from less than a millimeter at grain and pore level (microscopic heterogeneity), to manykilometers at basin level (megascopic heterogeneity). Identification of the heterogeneities in sedimentary basin is an interesting task for exploration geophysicist, since the presence of strong heterogeneity often coincides with hydrocarbon occurrence.

In heterogeneous medium, any two points in space is characterized by having different coefficients of the elastic constant. This particular characteristic of the heterogeneous media is responsible for the change in velocity field, as the sound wave travels via different path for every source receiver combination. The cross-section point of each inline and crossline is a CMP in a 3D survey and hence each CMP will give a seismic trace (Figure 2). Normalized fluctuation map constructed for depth converted seismic data shows how the lateral heterogeneity is changing with the depth. This study shows that the normalized fluctuation map, constructed for 3D seismic volume, is a powerful tool for providing comprehensive information of the lateral heterogeneity developed due to karsts and fault.

Let us consider a heterogeneous body of rock in which the inclusions are characterized by different elastic properties than the groundmass. We assume that the 3D seismic data are available for the region to which this technique will be applied in terms of traveltime slownesses. However, similar technique can be applied for velocities. We divide the region into sub-regions with the size of each sub-region being large enough to calculate the statistical characteristics from the seismic data. If we calculate average slowness for each sub-region, the sub-regions containing fault or karst will have significantly different average values than the sub-regions without them. Then, we calculate fluctuations of slownesses for each point by using equation (1).

. The term ‘normalized fluctuation’, at any random point in heterogeneous media, is used to characterize the difference of elastic properties from its average property over a window.

Where FN is the normalized fluctuation of the P-wave slowness at an arbitrary point, r.

Calculating the normalized fluctuation for the area of interest, the heterogeneous zone will be characterized by either having higher or lower values of compliance or stiffness than the surrounding materials and can be reflected in the traveltime slowness. The fluctuation of the elastic properties between heterogeneity and host rock can serve as an index for locating heterogeneities having higher or lower value of the coefficients of elasticity tensor compared to the host rock.

In order to use the normalized fluctuations as an indicator for the presence of heterogeneity, the coverage of 3D seismic volume in plan view should be greater than the size of the heterogeneity. Also, the size of heterogeneity that can be detected should not be smaller than the distance between two seismic traces (commonly 110 ft). An example of the arrangement of seismic survey for fault/karst location is shown in Figure 2. 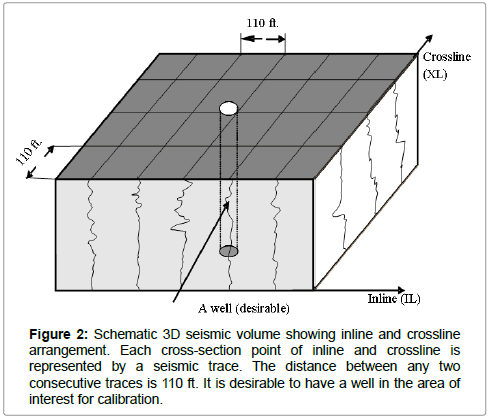 Figure 2: Schematic 3D seismic volume showing inline and crossline arrangement. Each cross-section point of inline and crossline is represented by a seismic trace. The distance between any two consecutive traces is 110 ft. It is desirable to have a well in the area of interest for calibration.

T represents spatial correlation function depending upon the fluctuations at points r0,r ; and

is the correlation function amplitude, and ϕ (r) is a function describing the decrease of correlations in space.

Since, the correlation function amplitude is the product of fluctuations averaged over a considered volume, this characteristic indicates the places of enhanced heterogeneity more pronounced compared to the normalized fluctuation. However, this parameter gives no possibility to determine if the fault/karst is open or healed.

The size of the heterogeneity along three orthogonal axes can be estimated via calculating the radius of the spatial correlation function using equation (5) as follows:

where, Rx (r0 ), Ry(r0 ), Rz(r0 )are the radii of the spatial correlation function in X, Y and Z direction, respectively.

Of course, the aforesaid statistical characteristics are specified for statistically heterogeneous media. However, their analogs formally calculated by formulas (2), (4) and (5) are useful in practice for fault/karst location, which will be demonstrated in the next section.

In order to use the characteristics developed in equations (2), (4) and (5) to identify heterogeneity, we apply a method of running window. The area for which 3D seismic data are available, we define sub-regions (3D windows) for running purpose, containing the number of nodes large enough for calculating average values (at least, greater than 7 over each coordinates). We calculate the parameters using equation (2), (4) and (5) within the current 3D window. The result is based on the value obtained at the central point of the current window, assuming that the window is statistically homogeneous and the central point value would be representative of entire window. Fixing one of the lateral coordinates, we scan our area changing another coordinate and depth to determine the length averaging 3D window along the vertical direction, we specify a frequency which corresponds to a particular wavelength for a given velocity, is calculated for the central point of current 3D window. Then, the length of averaging 3D window in vertical direction is set to be equal to the wavelength found.

3D depth converted seismic volume having trace spacing 110 feet in inline and crossline direction has been analyzed as shown in Figure 2. Normalized fluctuation map of P-wave slowness (inverse of P-wave velocity) is shown (Figures 3 and 4). A layer having smaller slowness will be faster in terms of velocity, and vice-versa. Running window averaging has been applied over the whole 3D seismic volume and the results of normalized fluctuation in Y-Z plane (fixed crossline) is shown at different frequencies (Figures 3 and 4). As we change the size of the running, or averaging, window it corresponds with a particular frequency. The size of the averaging window dictates the resolution of the measurements. Smaller window size can make better detection of the small size seismic heterogeneity having different slowness, than larger window size. Positive values of the normalized fluctuation are represented by notches pointing upward corresponds to the smaller value of FN (blue color), and negative value of the normalized fluctuation are represented by notches pointing down, corresponds to the smaller value of FN (green color). 3D view having X-axis upward in the left column, and plan view of Y-Z plane in the right column is shown in Figures 3 and 4. 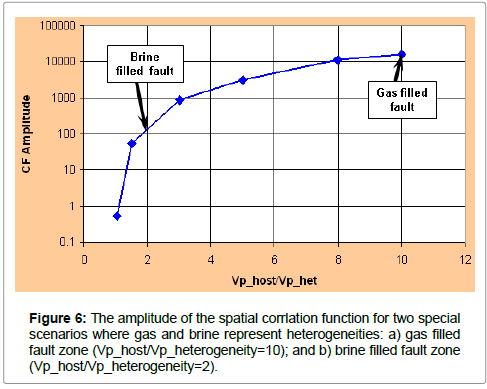