Anterior Bone Loss in an Anterior Cervical Disectomy and Fusion

Background: Anterior bone loss (ABL) has recently been described in cervical disc arthroplasty (CDA). Its cause remains unknown but because it has not been described in anterior cervical disectomy and fusion (ACDF) researchers believe the cause relates to wear debris. Therefore, this study aims to describe ABL in ACDF and therefore support alternative causes for this phenomenon. Methods: Two case reports of ABL after ACDF are presented. Results: Both cases developed early ABL (within 3 months) that was static by one year. Neither patient developed neck pain (VAS 0/10). The functional outcomes of the first case were excellent and no further treatment was required. The second patient developed adjacent segment disease and worsened myelopathy necessitating further surgery. Conclusion: ABL occurs in ACDF, supporting the hypothesis that ABL is a surgical technique rather than implant specific phenomenon. Clinical relevance: ABL is not specific to CDA and therefore not likely to be caused by wear debris, but rather surgical technique or stress shielding.

Anterior bone loss (ABL) in cervical disc arthroplasty (CDA) has recently been described [1]. Some authors suggest that ABL relates to the implant, however, others have argued that it relates to the surgical approach [1-4]. Those proposing a prosthesis related phenomenon, cite the absence of literature reporting on ABL in anterior cervical disectomy and fusion (ACDF) as evidence that it is not a surgical technique but rather a prosthetic complication.

This study is the first to specifically describe ABL in ACDF and supports the concept that ABL is a surgical technique rather than implant specific phenomenon.

We hypothesized that ABL occurs in ACDF and is not unique to CDA. A 57 year old female with multi-level cervical disc degeneration and a C5/6 large central disc prolapse causing severe cervical myelopathy and an inability to walk due to lower limb weakness (MRC grade 4/5) and ataxia, underwent a C5/6 peek Impix-Manta ACDF (Medicrea) through an uncomplicated right-sided antero-lateral approach. The degree of anterior vertebral diathermy and soft tissue clearance was again not recorded. Kaspar distractors were utilized and the posterior longitudinal ligament was resected.

Post-operatively, both patients received oral anti-inflammatories and a soft-collar for 6-weeks.

He made an excellent recovery, without complication. He had immediate resolution of his cervical neck pain and radicular pain. His Oswestry Disability Index (ODI) improved from 18/50 pre-operatively to 2/50 at 5-years post-operatively.

His radiographic follow-up showed early ABL affecting his ACDF and CDA commencing within the first 8-weeks without progression beyond the first year (Figure 3). She made a slow recovery with minimal improvement in her gait and lower limb strength. She denied any axial neck pain (VAS neck 0/10) or radiculopathy (VAS arm 0/10). Her Oswestry Disability Index (ODI) improved from 22/50 pre-operatively to 10/50 at 3 months postoperatively. Her Radiographic follow-up showed early anterior bone loss occurring within 3 months (Figure 5). 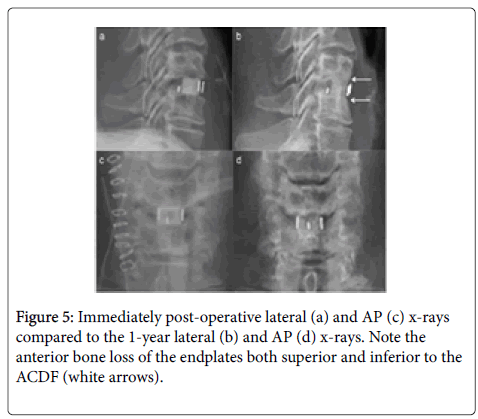 Figure 5: Immediately post-operative lateral (a) and AP (c) x-rays compared to the 1-year lateral (b) and AP (d) x-rays. Note the anterior bone loss of the endplates both superior and inferior to the ACDF (white arrows).

One year post-operatively she had worsening of symptoms (ODI 33/50) with cross-sectional imaging showing both cranial and caudal adjacent segment degeneration and cord compression as well as stenosis at C5/6 from the fusion mass. She therefore underwent a C4/5 and C6/7 ACDF with a C5/6 partial corpectomy with autologous bone grafting and a C4-7 anterior plate (Figure 6). She has made a gradual recovery in her gait but remains with a MRC 4/5 power of her lower limbs. 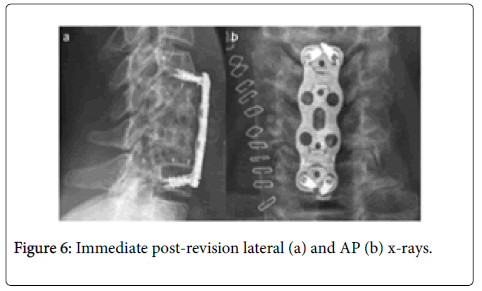 Figure 6: Immediate post-revision lateral (a) and AP (b) x-rays.

This is the first article specifically describing ABL in ACDF. This finding supports the theory that ABL is not arthroplasty specific, but rather related to the surgical technique or insertion of a rigid body on an endplate.

The cause of ABL remains unknown. To date it has only been described in CDA and therefore most consider ABL to be a complication that is specific to disc arthroplasty. Thus, theories have included wear debris, low-grade infection and stress shielding. In our cases we found early ABL without subsequent progression, which is not consistent with wear debris or infection. Furthermore, the patients’ outcomes were excellent, with resolution of pain, improved functional scores, successful fusion and no need for further intervention, which suggest that the ABL identified in these cases is a benign condition. In addition, there was no evidence of implant bone interface lucency, thus, we feel a reaction of the endplates to the specific material of the implants.

Therefore we propose that alternative causes of ABL are more likely. These include stress shielding, the absence of anterior vertebral traction from the resection of the anterior longitudinal ligament (ALL) during the anterior cervical discectomy, a direct osteolytic insult inflicted to the anterior vertebra or avascular necrosis [1].

We feel that the blunting of the anterior vertebral beak superior to the ACDF in case 1 and both endplates in case 2 is consistent with stress shielding and a lack of ALL traction. This is consistent with previous literature and the basis of Dr Ralph Cloward’s original advocacy of ACDF for cervical stenosis because the posterior osteophytes resorb with time. Because of the short timeframe to its occurrence an alternative theory remains a direct osteolytic insult to the vertebral beak during the dissection and anterior clearance.

However, we feel that the time course and severity, as well as the wedge shaped area of ABL of the endplate inferior to the ACDF in case 1 is more consistent with avascular necrosis. We propose that this results from a direct osteolytic insult, such as heat necrosis, inflicted to the anterior vertebra or direct injury of the anterior vertebral nutrient vessel [1,5].

Clearly the causes remain unproven and the low patient numbers limit this report, thus caution needs to be observed in extrapolating the results [6]. Further research into the rate of ABL in ACDF and specific surgical risk factors is necessary [7,8].