Are there Differences in Energy Consumption and Distance Ambulated in Young Healthy Adults Using Canes?

Background: Individuals rely on canes to restore function when facing a mobility issue. In acute care, there is no evidence of the best new cane with a single point for patients. Jointed canes have been favored by some because it mimics the ankle joint. The most common jointed cane is called the Hurricane. There have been no studies that demonstrate these claims. Also, there are no studies which compare single point canes to jointed canes. Purpose: The purpose of our study is to assess the effect of the jointed cane, offset cane, and single axis cane (SAC) on energy expenditure and distance ambulated. Methods: Fifty healthy subjects performed two timed tests while using the three types of canes and wearing pedometers. Blood pressure, heart rate and rate of perceived exertion were taken before and after the timed tests. Results: A Repeated Measures ANOVA assessed non-significant differences between the canes on energy variables. Main effects were found on distance measures, F=163.88, p=.00 (2MWT) and F=4.44, p=.01 (6MWT). Paired t-tests assessed distance differences as p=. 01 for the jointed cane/ SAC; p=.03 offset cane /jointed cane. Conclusion: This was the first study to assess the jointed cane compared to the offset single point cane and traditional handle single point cane. The results demonstrate less distance traveled with the jointed cane as compared to the other canes on timed tests. Energy expenditure was similar regardless of cane type.

Canes are prescribed for instability, such as balance deficits and gait abnormalities. Persons recently hospitalized are about 30% more likely to require a mobility device [1]. There are many cane styles with differences in the base, handle and now the shaft that simulates ankle joint motion. This study assessed for differences between the single axis canes (SAC), offset cane, and the jointed cane, and the impact they have on energy expenditure and distance ambulated. Energy expenditure is the physical demand required by an individual's workload. It is a vital measure in relation to work efficiency and how an individual responds to demands placed on the body. To investigate energy expenditure, heart rate and oxygen uptake are tools that can accurately measure energy consumption. Heart rate is a valid and reliable index of exercise intensity under controlled conditions. Heart rate proves to be linearly related to oxygen uptake and energy cost under submaximal workloads [2]. In addition, the rate of perceived exertion (RPE) is used to quantify an individual's perception of the physical demands of any activity. The most widely used RPE tool is known as the Borg scale. The Borg scale is a psychophysical, scale with rating ranges from 6 (no exertion) to 20 (max exertion) catagorical [3,4].

A study conducted by Jeong et. al., found that the single axis cane was associated with significantly greater energy efficiency, longer distance ambulated, and higher velocity than the quad cane and hemi-walker [5]. This study showed that the single axis cane was more efficient than the hemi-walker and quad cane because it provided the subject with less travel time, greater distance, and walking speed within the six minutes of the test. This finding is supported by the fact that in healthy individuals, there is a positive linear correlation between oxygen expenditure and walking speed [6]. These findings suggest that using a single axis cane to increase balance will facilitate the individual in decreasing the use of less optimal gait patterns that increase energy cost, such as increased muscle co-contraction and step frequency [7].

The handle of the offset cane has a specific purpose to aid in balance support with comfort. In those with wrist pathology, an offset handle allows an individual to feel more comfortable while still getting the benefits of the cane’s function [8]. The handle is designed in a way where it allows the person’s body weight to be evenly distributed over the shaft of the cane. The design calls for a decrease in extension moment while using the cane [9]. However, Beasley et al., recently found that there was no difference in pressure applied when grasping using different types of canes [10]. The jointed cane is a special type of cane that is relatively new to the market. The most common jointed cane is called the Hurricane. According to customer reviews, it is considered to be the best cane they’ve ever used. This cane can stand on its own, has a pivoting base for added stability, a comfortable handle, and can be folded up for convenience [11]. However, the available research on this cane is very limited and difficult to obtain. For this reason, more research needs to be conducted on the benefits of a jointed cane and how this may differ from the other types of canes. The base of the jointed cane can pivot similar to the ankle joint in the human body, which increases balance and stability while walking on uneven terrain [11].

The 6 minute walk test (6MWT) and 2-minute walk test (2MWT) are reliable tools in measuring energy expenditure and endurance. The 6MWT has been widely used to assess functional ability and capacity due to its easy execution and interpretation. The 6MWT performance has become the most common method for estimating functional capacity in individuals with a number of health conditions [12]. In some instances, it was difficult to complete the entire test; therefore, the 2 MWT was alternatively developed as an alternative walk test. According to Bohannon, et. al., the distance walked over 2 minutes for the 2 MWT, can be a legitimate alternative to the distance walked over 6 minutes [13]. Overall, both tests are deemed reliable and valid in the community to measure gait speed, energy expenditure and distance ambulated [13]. The distance an individual ambulates can be measured using a pedometer. These devices are low cost, accurate, and unobtrusive [14]. Elsworth et al., found pedometers to be reliable and accurate at measuring step counts in 13 healthy subjects at a mean age of 29 years [15]. The Yamax Digi-Walker SW-651 pedometer has been found to be a valid resource during the 6 minute walk test (6MWT) among healthy adults with a 3% actual step count [14]. We hypothesized that utilizing the jointed cane during gait would decrease energy expenditure compared to an offset cane and single axis cane due to its design.

Fifty subjects (21 males and 29 females), between the ages of 18-35, were recruited to participate in this IRB approved study. All participants were college students from New York Institute of Technology (NYIT)-Old Westbury campus. This study was a repeated measures design. Inclusion criteria required healthy individuals with no joint pain, the ability to ambulate with a cane safely, and being sedentary (exercise less than 2 times a week). Exclusion criteria included those who took medications that could possibly produce a blunted heart rate, painful gait, exercised greater than twice a week, individuals with an active medical problem, and lastly, pregnancy.

After subjects were consented, resting vitals were recorded, to including HR, BP, and RPE. In order to accurately calculate distance, stride length was recorded for each participant. This permitted the research staff to accurately set the pedometer for each subject. Each subject performed three separate trials where they were randomly given one of the three canes (SAC, offset, jointed cane) and participated in the 2-minute walk test (2MWT) and 6-minute walk test (6MWT). Each subject began with the 2MWT to get accustomed to the protocol, next the 6MWT was completed. Vital signs were collected before and after each trial. Both the 2MWT and 6MWT were completed using a 30 meter track, with each subject wearing a DIGIWALKER SW-651 pedometer [15]. Participants were instructed to cover as much distance as possible in both the 2MWT and 6MWT using a comfortable and continuous pace. In addition, at the end of each trial, pedometer readings and RPE were recorded.

A Repeated Measures ANOVA was used to calculate the collected data within one group for dependent variables. An alpha level of p<0.05 was used for all statistical comparisons. A paired t-test was used to establish origins of main effects between the three canes. Table 1 demonstrates non-significant energy differences (BP, HR, RPE) between the three canes; however, significance was found on distance measures. Further analysis was done to determine the origin of the main effect of distance. As seen in Table 2, paired sample t-tests in regards to the 6MWT, demonstrate the difference in distance achieved with the jointed cane versus the single point canes. A graphical representation of this is seen in Figure 1. 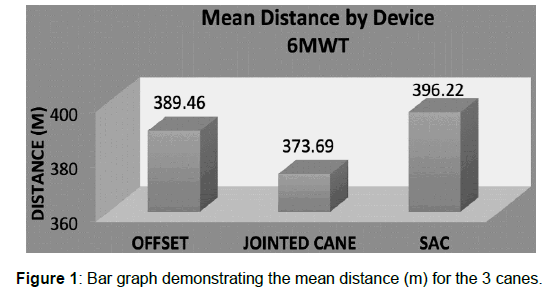 We posit that the increased base of support and the external replication of an ankle joint provided by the jointed cane resulted in fewer steps taken and hence, less distance. The SAC and the offset handle cane allowed subjects to take more steps and ambulate longer distances. The SAC and offset cane weigh less than the jointed cane and do not have the distal weight at the end of the cane compared to the jointed cane. This is supported by Jeong et al., who found gait endurance and gait velocity were greater, while the energy cost was lower in the single point cane compared to the hemi-walker and quad cane [5]. Clearly the weight and bulk played a role. In addition, this research adds to the evidence base of clinical relevance in cane selection. Optimal prescription of assistive ambulation devices must take into account multiple variables; including but not limited to weight of the cane, handle, size of the cane base and the environment in which the person will use the device. According to Chetta et al., 6 minute walk distance ranges from 400-700 meters in healthy young subjects without assistive devices [16]. However, in our study, overall distance ambulated is reduced with the use of all canes. The average distance in a 6MWT with a SAC, offset, and jointed cane is 396.22 meters, 389.46 meters, and 373.69 meters, respectively as shown in Figure 1. This indicates that the use of any assistive device results in fewer steps over time. Utilizing an assistive device for a healthy individual is not efficient. Limitations of this study include the fact that our subjects were all healthy, young college age students. Another factor that limited this study may have been our sample size. Increasing the sample size can improve the power of this study, further validating the research. Further research should include a population with impairments that requires the use of a cane for ambulation. Other studies that apply more sophisticated measures of energy consumption would be beneficial. Another factor to consider or investigate is utilizing the cane over different terrains and its effects on energy expenditure and distance ambulated.

In conclusion, this is the first study to investigate energy expenditure and distance traveled with the 6 minute and 2 minute walk test, while walking with three different cane types in healthy, young individuals. This study found that distance was significantly lower in participants who ambulated with the jointed cane, compared to the SAC, and offset cane. Further research is required with improved measures of energy expenditure and should be conducted on an impaired or elderly population, who requires a cane. 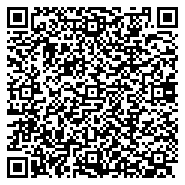