An aged male castrated European Shorthair Cat presented to a veterinarian with Horner Syndrome. The cat had been a long standing patient of the veterinarian and had no relevant health problems before except for recurrent Otitis externa due to infection with Malassezia pachydermatis which was repeatedly treated with antibiotic and anti-inflammatory drugs. According to the chronic otitis the veterinarian suspected an auricular origin of the symptoms and started treatment with the above mentioned drugs.

At the control date one week later a pronounced swelling and hyperemia of both lower eyelids was evident which was indication for surgical excision of the affected lid areas.

Histological evaluation of the excised specimens revealed a systemic affection of meibomian glands by a predominantly solid carcinoma showing sporadically tubular formations. The tumor also invaded the surrounding stroma of the lids

Tumors and tumor like lesions of the eyelids are less common in cats than in dogs [1] but more likely to be malignant [2,3]. Being the most frequent seat of primary eye tumors [4,5] feline eyelids, according to McLaughlin et al. [6] are affected with declining frequency as follows: squamous cell carcinoma (especially in white cats [7], squamous papilloma, uncategorized carcinoma, basal cell carcinoma, fibroma, fibrosarcoma, adenoma, cystadenoma, adenocarcinoma, lymphoma, histiocytoma, mast cell tumor, hemangioma, hemangiosarcoma, melanoma, neurofibroma and trichoepithelioma. This list of frequency may vary from study to study [1,5] but the first place of squamous cell carcinoma seems to be undisputed [8-11]. Together ophthalmic tumors comprise 0.34 % of all tumors in cats [11] and up to 39 % of feline and canine ophthalmic diseases are neoplastic.

A 15 years 3 months old, male castrated European Shorthair Cat presented to a veterinarian with Horner Syndrome: the 3rd eyelid of the right side had prolapsed and miosis of the right pupil was obvious. The cat had been a long standing patient of the veterinarian and had no relevant health problems before except for recurrent Otitis externa due to infection with Malassezia pachydermatis which was repeatedly treated with gentamicinsulfate, betametasonvalerat and clotrimazol (Otomax, Intervet, Vienna, Austria) and dehydrocortisol (Prednisolone, Merckle, Ulm, Germany). According to the chronic otitis the veterinarian suspected an auricular origin of the symptoms and the cat was treated with the above mentioned drugs. Radiographs from the head and thorax showed no signs of pulmonary or bulla tympanica affection. Hematologic and blood chemical results were inconspicuous. Because of a light cardiac murmur at the presentation the veterinarian started with benazeprilhydrochloride (Fortecor, Novartis, Kundl, Austria) treatment.

At the control date one week later a swelling and hyperemia of both lower eyelids was evident which was the reason for the surgical removement of the affected regions.

After resection of the lesions in both lower eyelids the specimens were fixed in 4% neutral buffered formaldehyde and sent to the Institute of Pathology of the Veterinary University Vienna (VUV). The size of the fixed eyelid specimens was 8 x 6 x 5 and 10 x 6 x 5 mm respectively showing irregular thickening and brightening of the eyelid margin.

After fixation for 24 hours in 4% neutral buffered formaldehyde, the samples were dehydrated in rising concentrations of ethanol and embedded in paraffin wax. Sections of 4 μm thickness were stained with hematoxylin and eosin (HE).

Twelve days after surgical treatment the owners called the veterinarian for euthanizing the cat at home. According to the owners the cat was in poor condition and refused to eat. A short optical control of the surgical eyelid wounds (the suture threats still being in situ) seemed without problems. Because of the owners decision to bury the cat in their garden it was not possible to conduct a post mortem examination.

Histology of a longitudinal section of one eyelid revealed a continuous series of parallel orientated, beam shaped, basophilic and cellular structures at the anatomic seat of the meibomian glands as well as numerous cell aggregates between these structures and in the area underneath the structures (Figure 1). The transverse section of the second specimen showed an irregular cell rich proliferation of the eyelid margin apparently affecting the local meibomian gland (Figure 2) but also spreading to the surrounding cutis, presumably mostly inside blood and/or lymph vessels. 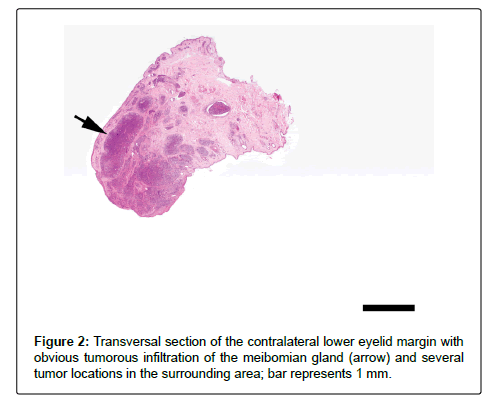 The beam shaped structures obviously corresponded with the original meibomian glands which totally were overgrown by monomorphous, medium sized epithelial cells with roundish to oval nuclei, containing one or a few large nucleoli and eosinophilic cytoplasm with indistinct margins. A few glands at the margin of the gland series showed mostly intact structures with sporadic foci of infiltration (Figure 3). Mitotic figures were frequent (MC=23/10 HPFs) in the tumor regions (Figure 4) and single cell necroses as well as necroses of small cell groups were present. The infiltrations inside, between and beneath the glands predominantly seemed to correspond with capillary structures. Figure 3: Margin of the lower eyelid with completely tumorous overgrown meibomian glands (left side) and incipient to advanced infiltration of intact or remains of meibomian glands (arrows); bar represents 300 μm. The infiltrates largely had solid character except for some cleft like spaces which probably were due to shrinking artifacts. In very few locations aside the glands the tumor showed tubular structures (Figure 5). Figure 5: Presumable intravascular tumor mass in the lower eyelid stroma with a single tubular formation; tightly adjacent a second tubular formation (arrow) which might belong to the tumor (as we consider) but also could represent an apocrine sweet gland of the eyelid; bar represents 40 μm.

We assume that the carcinoma was the result of synchronous malign transformation of apocrine sweet glands (Moll glands?) in both lower eyelids. These tumors are common dermal mass lesions, which can occur in feline eyelids consisting of poorly differentiated epithelial cells showing glandular features and are referred to as adenocarcinomas, but they are said to have benign biologic behavior [7]. The tumors probably invading the Meibomian glands via blood and / or lymph vessels interestingly with high affinity to these glands.

Alternatively the tumor could have emerged from the glands of the third eyelid but those neoplasms are said to usually displace the globe, and in larger tumors there is invasion of the adjacent orbital tissue [8].