A patient presented with acute, painless loss of vision in each eye occurring successively over a few days. He was diagnosed with bilateral central retinal artery occlusions (CRAO) and immediately underwent treatment for possible giant cell arteritis (GCA) while the etiology of CRAO was being determined. Further workup initially proved ambiguous in many respects for GCA verses other types of vasculitis. Definitive diagnosis of GCA was achieved with temporal artery biopsy, though this too demonstrated characteristics of other vasculitides. While awaiting pathology results, empiric treatment for GCA should continue uninterrupted to prevent progression or relapse, as GCA carries a significant risk of vision loss and visual recovery is exceedingly rare. Ultimately, the diagnosis relies heavily on clinical correlation.

Central retinal artery occlusion (CRAO) can occur via a variety of mechanisms, requiring equally varied treatments. While GCA accounts for only a very small number of cases [1], it should always be considered, as treatment must begin immediately to prevent disease progression and subsequent vision loss [2]. Vision loss secondary to GCA is almost universally irreversible [3]. Even new immunologic therapies are directed at maintaining remission and decreasing morbidity from chronic glucocorticoid use rather than reversing damage. This includes Actrema (tocilizumab), a recently approved biologic that antagonizes the IL-6 alpha-receptor and is postulated to play a significant role in the progression of GCA [4]. Unfortunately, GCA can be difficult to diagnose definitively, as many of the signs, laboratory findings, and even biopsy characteristics are insensitive and non-specific [5]. Comorbid causes of inflammation and vision loss may also be present and complicate the clinical picture. This poses a particular challenge when GCA produces CRAO rather than arteritic anterior ischemic optic neuropathy (AION), the pathology with which it is more commonly associated and thud more easily recognized [6]. The 2016 revision of the American College of Rheumatology (ACR) criteria for diagnosing GCA has improved the ability for clinicians to generate a reliable pretest probability [7], but without biopsy may still miss some cases, resulting in devastating consequences for the affected patients. Ultrasound features such as the “halo sign” have the potential to significantly improve diagnostic sensitivity and specificity [8] but requires expertise that is not yet widely available [7]. Biopsy continues to be the gold standard; however, sensitivity remains low (15-40%) due to segmental involvement of the vessels in GCA [7]. Overall, clinical correlation is required for appropriate diagnosis and treatment.

A 63-year-old African American male with a history of hypertension, diabetes and biweekly left frontal headaches for 10 years presented to the emergency department with acute, bilateral, sequential, painless loss of vision described as a “curtain lowering” in the left eye (OS) followed by identical symptoms in the right eye (OD) 72 hours later, with no interval recovery of vision OS. On exam, visual acuity was limited to light perception OD and no light perception OS, with poorly reactive, dilated pupils in both eyes (OU). Funduscopic exam confirmed bilateral cherry red spots (Figure 1) consistent with CRAO. The patient reported decreased sensation to pinprick over the left medial hand and forearm as well as the right hemiface. A soft palate abscess was noted on oral exam. Inflammatory markers were elevated as outlined in Table 1, including C-reactive protein (CRP) 95 mg/L. MRI of the brain revealed an acute lacunar ischemic infarction in the posterior limb of the left internal capsule as well as an old lacunar infarct in the right thalamus. Neither appeared cardio-embolic. Given a high index of suspicion for GCA, the patient was scheduled for temporal artery biopsy (Figure 2). Pathology demonstrated features of ANCA-associated vasculitis as well as a giant cell, the hallmark of GCA. 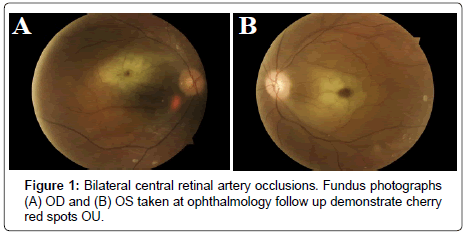 Immediately upon admission, empiric pulse dose steroids were initiated while further investigations were underway. After 3 days of intravenous methylprednisolone 250 mg every 6 hours, CRP and ESR dropped to near normal limits (12 mg/L and 27 mm/hr, respectively). Note that he also underwent surgical extraction of an infected tooth with irrigation and drainage of the palatal abscess during this time. On day 4 of therapy, steroids were transitioned to oral prednisone 80 mg daily with plans for a slow taper over the next 6 months. At the time of discharge, he had only regained vision to hand motion OU. Repeat labs one month after discharge revealed normal CRP and ESR, with sustained normalization of inflammatory markers over the next several months (excluding an isolated elevation at 3 months with CRP 6 mg/L, ESR 27 mm/hr, MPO 123 AU/mL). At 3 months, tocilizumab (162 mg weekly) was started by Rheumatology. Despite continued improvement in laboratory values after discharge, the patient demonstrated no further visual recovery. He is currently on month 4 of 12 of tocilizumab and a prednisone taper at 7 mg daily. He is also on aspirin and high intensity statin therapy for secondary stroke prophylaxis.

GCA can be a devastating disease when not addressed immediately, as demonstrated in the rapid loss of vision in this patient prior to presentation. Steroid therapy should begin immediately in potential cases until the diagnosis can be sufficiently excluded. Laboratory markers can be helpful for ruling in or out GCA but are generally nonspecific. Biopsy may provide a definitive diagnosis but is notorious for being falsely negative. Specificity is generally considered to be 100% when a giant cell is identified, but other features–including vascular and/or perivascular fibrinoid necrosis–may is present in a number of vasculitides. Appropriate continuation of therapy thus requires the careful integration of patient characteristics, laboratory data and diagnostic procedures.

Clinically, this patient scored 2 points on the ACR revised criteria (sudden onset visual disturbance, ESR ≥ 50 mm/hour in the absence of PMR) prior to biopsy and fulfilled the necessary inclusion criteria for a diagnosis of GCA (age ≥ 50 years old, absence of more likely etiologies). Three points are required to establish the diagnosis [7]. He also met the exclusion criteria of ENT inflammation. The headache he described was typical for GCA but had been present intermittently for 10 years rather than new onset.

None of the test results in isolation were sufficient to make the diagnosis, with the exception of the giant cell seen on biopsy. Notably, ESR and CRP may be elevated in the setting of other potential sources of inflammation, such as dental abscess in this patient. Cardioembolic stroke could not be definitively excluded as the etiology of CRAO based on imaging alone. Pathology specimens showed similarities to polyarteritis nodosa (PAN) and ANCA-associated vasculitis (AAV), neither of which fit the clinical picture. AAVs present with multiorgan involvement including, respiratory, renal and cutaneous manifestations, which are absent in GCA and lacking in this patient. Although ANCA is not generally considered in the diagnosis of GCA per se, the ANCA pattern observed here (MPO+) is only infrequently observed in PAN, helping to further eliminate this possibility. Furthermore, granulomatosis with polyangiitis (GPA)– which can also cause CRAO–is associated with cytoplasmic ANCA/ PR3 positivity, which was negative in this case. More importantly, the pre-test probability of a diagnosis of PAN, GPA or AAV was significantly lower than GCA. In cases where ANCAs are positive, the overall clinical picture should remain the basis for diagnosis of the type of vasculitis and therefore guide treatment. Although steroids are used in the initial treatment of GCA and AAVs, further immunosuppressive therapy is different, which may be crucial to prevent relapse and further ocular damage. 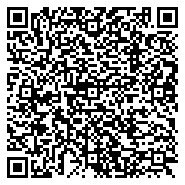