Hilmani S1*, Benjelloun A2 and Lakhdar A1

Background: Chordomas are malignant tumors arising from notochordal remnants and are typically locally aggressive tumors with a high propensity for local recurrence.

Method: We report an extremely rare case of cervical spine chordoma presenting with neurological deficit and retropharyngeal extension in order to assess the clinical presentation and treatment.

Results: We describe a case of 82-year-old man treated simultaneously by a precarotid approach for a retropharyngeal extension of cervical chordoma. He was referred to our institution with cervical pain, and weakness of the four limbs for 3 months, without dysphagia or dysphonia. The preoperative magnetic resonance imaging (MRI) showed a lesion of C5-C6- with epidural space and retropharyngeal involvement. After total resection, the cervical spine was stabilized with an anterior reconstruction and plating, with good improvement.

Conclusion: Among primary malignant tumors of bone, chordomas account for 3-4% of all cases. Chordoma is typically a locally aggressive tumor with a high propensity for local recurrence. Its management involves surgery, radiotherapy, or both. Increased awareness of this neoplasm may lead to earlier diagnosis and better treatment.

Chordomas are malignant tumors arising from notochordal remnants of the axial skeleton and are typically locally aggressive tumors with radio resistance and a high propensity for local recurrence. The most common sites are the sacrum and clivus. The upper cervical region is the second most common site in the spine [1]. Total removal is the technic of choice to improve the prognosis, but with existence of the adjacent critical anatomical structures, it is sometimes impossible to achieve wide-margin resection without sacrificing vital structures, potentially causing severe morbidity or mortality [2].

We report here the clinical futures and surgical technic of patient who were treated in one stage for low cervical chordoma and retropharyngeal extension with good outcome.

A 82-year-old man presented with a 3-month history of progressive motor deficit without dysphagia or dysphonia. There is no significant past medical history. Neurological examination revealed incomplete motor deficit at 2/5 on muscular testing without sensitive disturbance. Physical examination revealed a large, firm and immobile mass involving the right side of the middle anterior cervical region. Magnetic resonance imaging of the cervical spine and neck showed on the T2-weighted images lesion involving the anterior and right lateral portion of C5-C6 with marked retropharyngeal and epidural space involvement, with anterior cord compression (Figure 1). This lesion had extremely high signal intensity with extension into the right prevertebral and retropharyngeal space with a mass effect on the right posterior pharyngeal wall. After injection of gadolinium, inhomogeneous, bubble-like enhancement of the lesion was seen on the T1-weighted image with posterior extension witch encased the right vertebral artery (Figure 2). Surgical removal required a cervicotomy using right precarotid approach (presternocleidomastoid). The retropharyngeal encapsuled mass was removed by an en bloc excision. We then proceeded to an intralesional excision to remove the residual tumor and the portion around vertebral artery. Total resection of the ventral vertebral body tumor of C5 and C6 was performed in the second time, with spinal cord decompression (Figure 3). Anterior reconstruction was achieved with expandable cage. Cervical spine was stabilized by means of C4-C7 anterior plating (Figure 4). Six hours after surgery the patient improved with 4/5 on muscular testing and walked with help after 24 hours without any dysphagia or dysphonia. The patient was discharged from hospital the fourth day after surgery. Macroscopically, the specimen was composed of grey, elastic, myxoid tissue with patchy necrotic and hemorrhagic portions. Microscopic examination revealed tumor cells arranged in cords with a vacuolated cytoplasm embedded in a myxoid intercellular matrix. The final diagnosis was chordoma. Cervical CT scan one month later confirms the total resection without recurrence (Figure 5). Figure 1: Preoperative sagittal T2-weighted magnetic resonance imaging image showing the extension of the tumor from the right C5 and C6 vertebral body to the epidural space with marked retropharyngeal involvement. 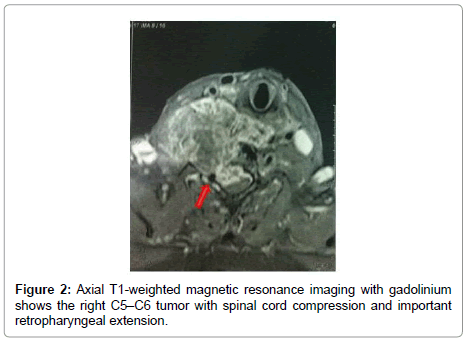 Figure 3: intraoperative photograph before (A) and after (B) tumor removal shows a free right vertebral artery (*). 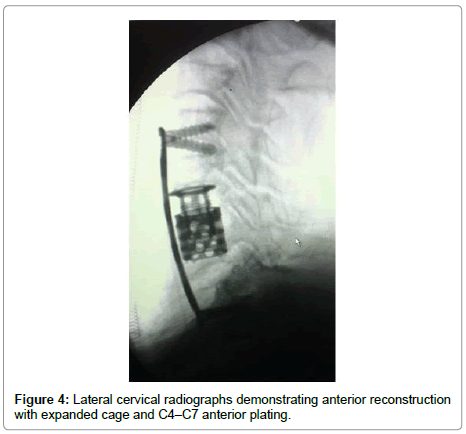 Among primary malignant tumors of bone, chordoma appears to be the fourth most frequent histological type (after osteosarcoma, chondrosarcoma and Ewing’s sarcoma), accounting for 3% to 4% [3]. Chordoma is a low-grade malignant tumor which is rare, generally slow-growing, and has a high tendency of recurrence [4]. The most common sites for the development of chordoma are the skull (32%), spine (33%) and sacrum (29%) [5]. Cervical spine chordomas is very rare and occurs in 4-5% of all location [6-8]. Median age at diagnosis is 58.5 years (range, 3-95 years) and a generally progressive increase in incidence with age [5]. Spinal chordomas frequently produce compression of the spinal cord and nerves with pain, loss of mobility, and sensory motor deficit. Cervical chordomas tend to present as a pharyngeal or lateral neck mass. As the tumor expands, atypical presentations such as dysphonia or dysphagia are reported [9,10]. The possibility of a chordoma should be considered when a destructive lesion of the cervical vertebral body is associated with a large welldefined soft tissue mass that is extremely hyperintense on T2- weighted MR images and presents inhomogeneous enhancement after contrast material injection [11]. MRI detects epidural spread and can be used to evaluate encasement of the vertebral arteries before surgery. The presence of physaliphorous cells and the trabecular or cord-like arrangements with amyxoidmatrix are typical for chordoma. In addition, immunohistochemical examination may be more reliable by showing positive staining for keratin, epithelial membrane antigen and S-100 protein [12]. The presence of microscopic tumor necrosis and an MIB-1 labeling index of more than 5% are considered as poor prognostic factors [12].

The current management of spine chordoma involves surgery, radiotherapy, or both. Chemotherapy has been of little benefit [10,13]. Surgical management of malignant cervical spine tumors can be challenging. The type of the approach depends on tumor location, tumor consistency, and clinical symtoms. Surgery with complete tumor resection is considered the treatment of choice. However, total resection is challenging due to the proximity of vital structures (e.g., the vertebral arteries, spinal cord, and cervical nerve roots). When the tumor englobes the epidural space or infiltrates the nearby structures total resection and, in particular, en bloc removal are not always possible, as emphasized in previous studies and resection of vertebral lesions may be less efficient than for other locations as vertebral tumors are often more developed at the time of diagnosis [2,4]. On the other hand, intralesional resection of cervical chordomas, which used to remove vertebral and epidural tumor, results in a high local recurrence rate, with up to a 70% long-term mortality rate [13,14]. In our opinion, a more aggressive strategy, which has a high morbidity including vertebral artery injury, respiratory failure, retropharyngeal wound dehiscence, and nerve or spinal cord damage, is not allows justified as reported in some publications which have shown that there are no important differences between patients operated on using an aggressive strategy (spondylectomy) and those submitted to corpectomies [15,16].

Anterior approach below a good control of the vertebral artery, multilevel corpectomies, removal of the epidural space component of the chordoma, spine reconstruction, and anterior plating. A single anterior approach is substantially easier and could provide spinal stabilization after removal of tumor. However, a posterior approach is indicated or associated to anterior approach due to multilevel disease, previous radiation, difficulty in retraction of trachea and esophagus, and in cases where circumferential fusion cannot be done due to patients’ poor medical condition. Anterior column reconstruction with a methylmethacrylate and titanium expanded cage, such as used in our patient, can provide immediate stability and can be used as alternative to bone fusion [10,17,18].

Chordomas are considered to be radioresistant tumors and local control can only be achieved with high radiation doses. Proton beam radiation therapy offers the advantage of increasing the dose delivered to the tumor while minimizing radiation to surrounding normal tissues [15,19]. The small numbers of patients reported make optimal treatment difficult to define. We think that Chordomas of the cervical spine can be managed by surgery and it seems reasonable to reserve radiotherapy for incomplete removal, recurrences and inoperable tumors. The 5- year and 10- year overall survival rates are 60% to 70% and 35-40% respectively [5]. Tumor recurrences occur typically in the form of multiple bone masses. Chordomas metastasize most often to lymph nodes, lung, bone, and liver, with a higher incidence among chordomas of the mobile spine [9].

Chordomas of the mobile spine have a poor prognosis and traditionally have been difficult to manage. Earlier diagnosis of smaller lesions may have a significant impact on their management and prognosis. Despite this, the treatment of choice remains the total resection, as much as possible, followed by proton beam radiation. 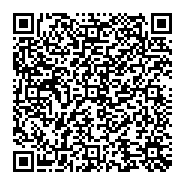