Clinical Practice Variability in the Management of Patients with Alveolar Proteinosis

Alveolar proteinosis is a diffuse lung disease characterized by the accumulation of an amorphous and lipoproteinaceous of inorganic powders and HIV infection. Characteristic bronchoalveolar lavage is diagnosticated (presence of positive PAS material in the alveoli (pulmonary surfactant). This disease can be congenital, primary/idiopathic (due to alteration of the stimulating factor of macrocytic colonies) or several clinical conditions like hematological diseases, inhalation proteinaceous material, PAS positive). Total lung lavage (TLL) is onsidered the gold standard treatment of this pathology.

One problem related to alveolar proteinosis is the great variability in the management of the patients suffering alveolar proteinosis. A recent study in which 30 centers worldwide specialized in TTL were surveyed, reported that variability is specially significant in certain aspects of the technique, such as the time interval between the lavage of both lungs, the choice of the first lung to be washed, the position in which the technique is performed, contractions, methods and followup schedule, use of thoracic percussion and amount of fluid used in total [1]. In the present report we have analyzed our experience in TLL with special attention to these controversial aspects.

Our sample consists of 17 patients, with a mean age of 41.11 years old. The distribution by sex is 14 men (82.35%) and three women (17.64%). Fourteen were smokers (82.35%), 2 were not (11.76%) and the other one was not aware of smoking (5.8%). All patients were symptomatic before the procedure, but only 8 had a respiratory failure according to arterial blood gases (47.05%). Ten of the patients had a restrictive spirometric pattern before the procedure (58.8%), while the remaining 7 had a normal spirometry (41.17%). Fourteen patients had a diffusion (DLCO) disorder (82.35%), of the 3 remaining, this data was not available. All patients had radiological involvement (except for a patient whose this information was not available). Five of them had an alveolar pattern and 11 had an alveolointerstitial pattern. Eleven bipulmonary lavages were performed, 5 had no indication and the remaining one did not tolerate it.

It is generally preferred to leave a time interval of 1-2 weeks between the lavage of both lungs; however, it has also been shown that bilateral simultaneous total lung lavage is a safe and effective technique, which improves symptoms, function pulmonary and gasometry of patients with alveolar proteinosis [2-4]. It is important the time interval or not?

In our series of cases, in 6 patients bilateral lavage was simultaneous, one was bilateral, with one week between the lavage of both lungs and another was unilateral due to intolerance to the contralateral lung lavage. Four of the six patients who underwent bilateral simultaneous lavage, improved PaO2, one got worst and in the other do not have this data. The DLCO improved in one patient. Another one remained the same value and we do not have this information of the remaining four. We do not have FVC in three of these patients, 2 worsened, and the rest maintained the same. In the only patient who left one week between the lavage of both lungs, PaO2, DLCO, FVC and clinical was improved. We do not have radiological information. We do not have information on the evolution of the only patient who unilateral pulmonary lavage was performed, due to intolerance to the procedure (Figure 1). 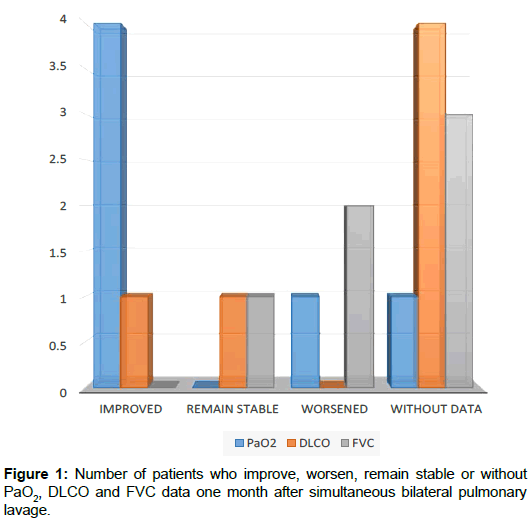 Figure 1: Number of patients who improve, worsen, remain stable or without PaO2, DLCO and FVC data one month after simultaneous bilateral pulmonary lavage.

The most accepted contraindications are coagulation disorders, anaesthetic risk, and cardiopulmonary instability. In our series of cases there was no contraindicated case for total lung lavage and there was only one case in which the procedure had to be stopped due to intolerance to it.

The first lung to be lavaged is the one that is most affected [5]. Three of the four patients in whom the choice of the first lung was not determined by radiological involvement, PaO2 improved, this data is unknown in the rest of them. Three of them improved the DLCO, while the rest worsened. FVC improved in one patient, remained stable in two and the rest is unknown. Clinically two improved, one worsened and another remained stable. Radiologically one remained the same and the others did not have such information.

In two patients, we do not have radiological information about which lung is most affected. In the two patients in which the decision of the first lung to be washed was determined by compliance (starting with the most affected lung), in one of them PaO2 improved. We do not have any additional information. In one patient, the first lung washed, had less radiological involvement. The result was an improvement in PaO2 and FVC, however the DLCO worsened. He remained clinically and radiologically stable. The mean increase of PaO2 in patients in whom the first lung treated was random was 6.73, the improvement of PaO2 in the patient who started to wash the most affected lung was 9 points, the mean increase in PaO2 in the patient who started to wash the lung less affected was 8 points (Figure 2). 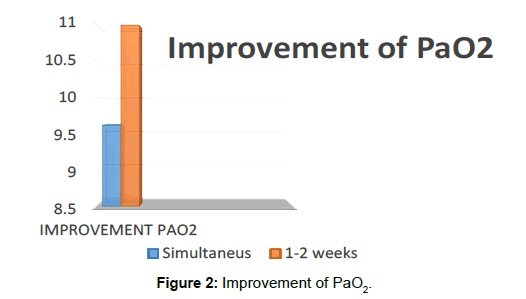 Regarding the position in which the technique should be performed, both prone and lateral decubitus are effective techniques [6,7].

Regarding the methods and timing of follow-up, the literature describes that 50% of patients needs only one lavage, while the rest needs repeat washing in 6-12 months [12,13]. With the information available, we can affirm that three patients in whom the bilateral pulmonary lavage was simultaneous, did not need a new lavage until 10, 6 and 3 months respectively (6.33 on average). In a patient in whom the time interval between the lavage of both lungs (simultaneous or leaving 1-2 weeks) was unknown, he did not require another lavage until 28 months.

Regarding the first lung to be washed, we know that in a patient started by the lung less affected, he did not require another lavage until 48 months. In two other patients of whom we did not have radiological information it took 10 months and 3 months simultaneously until the next lavage. Another patient in which the decision of the first lung to wash was randomly (Figures 3, 4a and 4b) he needed 6 months until the next lavage. 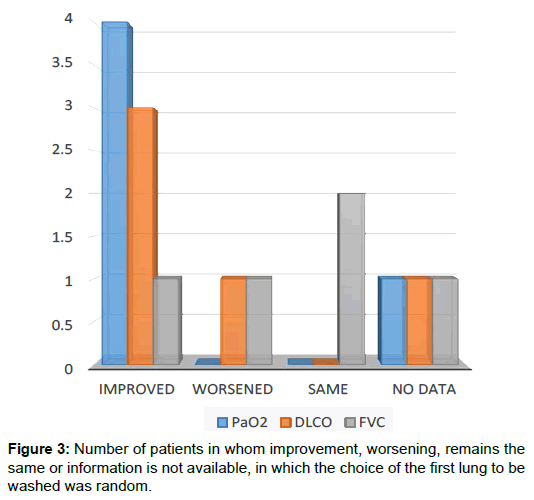 Figure 3: Number of patients in whom improvement, worsening, remains the same or information is not available, in which the choice of the first lung to be washed was random. 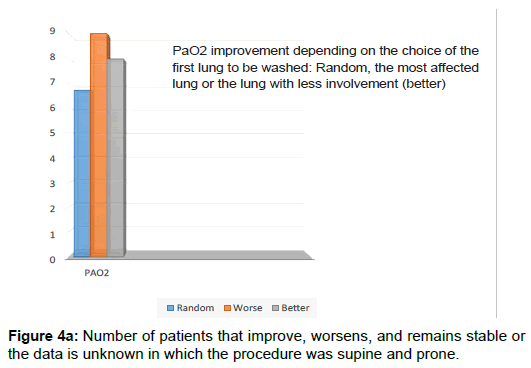 Figure 4a: Number of patients that improve, worsens, and remains stable or the data is unknown in which the procedure was supine and prone. 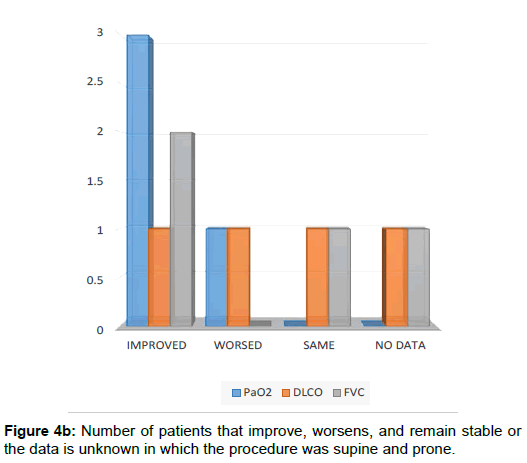 Figure 4b: Number of patients that improve, worsens, and remain stable or the data is unknown in which the procedure was supine and prone.

- In our series of 17 cases, both bilateral simultaneous lung lavage and bilateral lung lavage leaving one week between the lavage of both lungs were safe procedures.

- In 4 of 6 patients (66.66%) in whom simultaneous bilateral total lung lavage was performed, PaO2 improved one month after the procedure.

- Regarding the position, in all our patients the technique was performed in supine position and prone position, with good results, especially in the improvement of PaO2 and FVC.

- Due to the characteristics of this study, we do not have enough information to know whether simultaneous bilateral lung lavage requires the use of more litters than bilateral lung lavage, leaving 1-2 weeks between both washes. We also do not know if the patients who started with the most affected lung required less liters than those who started randomly, or considering other criteria.

- In conclusion, our experience reflects the variability in the management of patients suffering alveolar proteinosis. It would be interesting to carry out a prospective study to analyze these issues.