Dengue fever is wide spreading and Government has taken initiatives to control it. However in rural areas it is still required to create awareness and appoint doctors for regular check-ups. In the proposed system is based on the advancement of new innovative technology and Internet of Things which act as a screening device for Dengue identification. It allows doctors to attend multiple patients in rural areas without constants focusing on a single patient.

At current scenario Dengue fever is consider as a deadly disease [1]. The disease usually is self-limiting but in some people can present with life-threatening complications such as Dengue Haemorrhagic Fever and Dengue Shock Syndrome [4]. Dengue fever is wide spreading and Government has taken initiatives to control it. However in rural areas it is still required to create awareness and appoint doctors for regular check-ups. In the proposed system is based on the advancement of new innovative technology and Internet of Things which act as a screening device for Dengue identification. It allows doctors to attend multiple patients in rural areas without constants focusing on a single patient. Internet of Medical Things (IoMT) [2] is an amalgamation of medical devices and applications that can connect to healthcare information technology (IT) systems using networking technologies. It connects patients to their physicians and allows transfer of medical data over a secure network, which in turn reduces unnecessary hospital visits and reduces the burden on healthcare systems largely. In this project an IoT (Internet of Things) [3] system will develop to detect early Dengue symptoms and to monitor the patient with this chronic disorder using cloud data logging. The Dengue identification is achieved by RBC count measure by passing infrared rays in the finger of human body. The developed system can also be used to monitor various other parameters of patients such as Respiration, Body temperature, Pressure and the same can be logged every 20 seconds on cloud services. The doctors can monitor the patient’s data using his mobile phone by logging into the cloud service and take necessary actions according to the parameters measured. When the patient’s immunity level goes below a critical level, it is informed to the doctor through mobile notification.

One of the first activities undertaken by the project was a series of dengue affected people surveys to gather data on screening symptoms of the dengue fever. The results from these surveys will feed into

The design phase of the device with the technologies being promoted. Specifically, the survey was designed to identify the initial symptoms.

A major aspect in the healthcare system is the monitoring of the patient's vital signs such as temperature, blood pressure and heart beat rate [3]. Many monitoring devices that display the patient's vital signs are commonly present in the critical care units in operating rooms. But there could be instances where the doctor couldn't be alerted in time when there is an emergency; despite of 24 hours of monitoring. This project incorporates sensors to measure important parameters as well as body immunity to identify Dengue and enables round the clock monitoring of Dengue patient. We are detecting the human body immunity levels by using immunity bio-sensor as well as we are monitoring the Pressure level and breathing level by using the Pressure sensor and Respirology sensor respectively. All the measured data are logged into cloud service using Internet of Things [4]. The patient’s clinical data can be interpreted by Physicians from remote place by accessing into the cloud service.

An Internet of medical things can be built to collect patient’s clinical data parameters and is used to upload the same to the cloud services. A simple pragmatic solution to this problem can be made using Raspberry pi, a credit card sized single board computer. The Raspberry pi is used for our IoMT implementation by developing algorithms using Python programming language. The algorithm focuses on collecting the data from the sensor array, perform calculations to measure the immunity and to the feed the data to the online cloud services over the internet through Wi-fi. The functions of the various Internet of Medical thing components are

Raspberry Pi is a credit card sized single board computer weighs only 50g [4]. It uses power rating of 5V, 700mA and cost effective than an actual computer. The board comes in different models A, B and a more advanced version B+. The B+ model has 512 MB RAM, runs on ARMII processor and has an operating frequency around 700MHz Many bootable Operating systems like Raspbian, Pidora, and Raspbmc can be installed using a SD card. Different peripherals like mouse, keyboard, and Wi-Fi adapter can be connected using its four USB2.0 ports to make it a full size computer. Also the board consists of an Ethernet port to connect to network, GPIO pins to interface and control switches, sensors, LEDs and other devices. All kinds of monitors like projectors, LCD screens, TVs can be connected using HDMI port. Some additional features include the audio jack and the camera connector to interface camera. These numerous features enable the users to use Raspberry pi in wide range of applications (Figures 1 and 2). 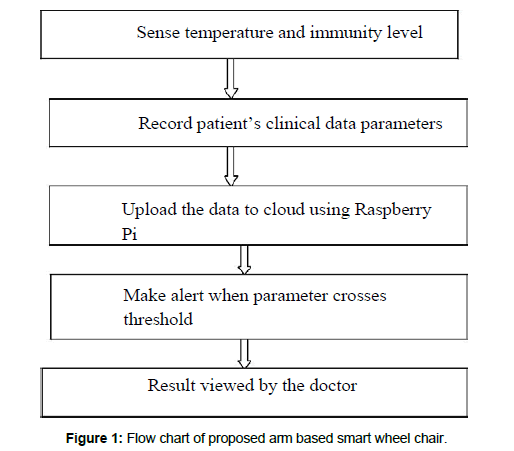 The Sensor array consists of five sensors, which include a Heartbeat sensor, Respirology sensor, temperature sensor, pressure sensor and most importantly Pulse Oximeter sensor [5]. The temperature sensor may be a digital sensor (DHT11) or analog sensor (LM35). The pulse Oximeter sensor provides the analog information of oxygen level in the blood, which is used to determine the RBC count and immunity of the patient. An Analog to digital converter is used to interface the pulse Oximeter sensor to the Raspberry pi. The dengue is identified from the immunity calculations and is intimated to the doctor [6,7]. The other parameters of the patient are constantly monitored and logged to the cloud. If anyone of these parameters go beyond a threshold level, it is notified to the doctor immediately.

The proposed system will be developed to detect early Dengue symptoms and to monitor the patient with this chronic disorder using cloud data logging. It can be used to allow the doctors to attend multiple patients in rural areas without constant focusing on a single patient [8- 10]. The proposed system will be implemented by integrating features of all the hardware components mentioned. All modules will be organized and placed properly to the best working of the system.

1. Pre-screening which avoids severe attack on the patient.

2. It will be used in creating awareness among rural areas.

3. Flexible communication between doctors and patients irrespective of distance.

1. Used in pre identification of this deadly disease.