Renal cell carcinoma (RCC) accounts for 0.5–1.5% of all canine tumor types and is very aggressive, rapidly growing, and metastasis-generating, culminating in the death of the animal. The management of canine RCC lacks predictive biomarkers. The aim of this study is to conduct an epidemiological and pathological analysis of dogs affected with RCC.A retrospective and descriptive review of studies published between January 2001 to December 2019 was carried out using the following electronic databases: Web of Science, PubMed, SciELO, Science Direct. Twenty-one articles from 11 countries were included in the study, totaling 258 cases. Histopathological analysis based on cytological criteria showed that cromophobic and clear cell carcinoma were the most frequent subtypes. The histological classification revealed that papillary and tubular carcinoma accounted for 70% of the cases. Vimentin, Pax8, CKs (CK AE1/AE3, CK CAM5.2 and CK7), COX-2, Napsin-A, CD10 and CD117 were the most commonly used diagnostic biomarkers, corresponding to 80% of cases. Moreover, 14-3-3σ and COX-2 were also used as predictive biomarkers for canine RCC.

In conclusionVimentin, Pax8, CKs (CK AE1/AE3, CK CAM5.2 and CK7), COX-2, Napsin-A, CD10 and CD117 were the most commonly used diagnostic biomarkers, corresponding to 80% of cases. Moreover, 14-3-3σ and COX-2 were also used as a predictive biomarker for canine RCC.

Malignant neoplasm is a result of nonlethal damage to the cell genome leading to self-sufficiency in growth signals, escape from apoptosis, angiogenesis and metastasis. Cancer affects both wild mammals and domestic animals, and among domestic animals, dogs and cats are the most affected species [1]. Cancer is the major cause of death in pet dogs [2].

Primary renal neoplasia accounts for 0.5–1.5% of all canine tumor types and renal cell carcinoma (RCC) is the most common [3,4]. RCC is most commonly observed in male adult dogs (average age – 8 years), with no breed predilection [5-7]. Dogs with RCC frequently present a history of a palpable abdominal mass, anorexia, weight loss, fever and hematuria [6].

Canine RCC has been classified according to histological (papillary, tubular, solid, and multilocular cystic) or cytological (chromophobic, eosinophilic, and clear cell type) subtypes [8]. The histological/cytological subtypes show no significant correlation with the disease outcome. Thus, there is a need for additional tools to help in the diagnosis and theragnostics [9].

Immunohistochemistry (IHC) is a powerful tool in human and veterinary medicine. However, due to the lack of specific antibodies, its application in veterinary diagnostic pathology is not common [10]. The aim of this retrospective study is to describe the tumoral markers that have been used to determine the prognosis and therapeutic management of canine RCC.

A literature search was carried out on Web of Science, PubMed, SciELO, and Science Direct, using the keywords dog, canine, renal cell carcinoma, immunohistochemical, and pathology. The papers selected (on the basis of their content) were published from January 2001 to December 2019.

A total of 21 articles (12 case reports and 9 research articles) were selected. Six studies were conducted in the United States of America, 3 in Korea, 2 in the UK, 2 in Turkey, 2 in Brazil, 1 in Greece, 1 in Canada, 1 in Taiwan, 1 in Japan, 1 in Portugal and 1 in Italy. Figure 1 shows the percentage representativeness of each country. 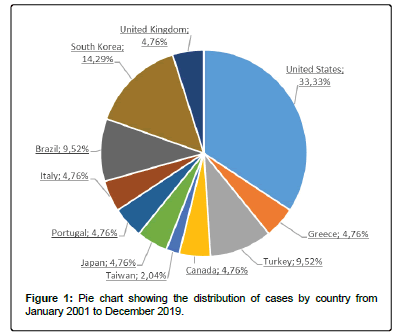 Figure 1: Pie chart showing the distribution of cases by country from January 2001 to December 2019.

A total of 258 cases were included in this study. The case reports concerned 8 males and 3 females (male to female ratio 2.7:1), and the research articles (data recorded) included 135 males and 112 females (ratio 1.5:1). The age at diagnosis ranged from 1.3 to 14 years and 86.8% of dogs had a primary disease while 13.2% had a metastatic disease. No breed predilection was identified. RCC was classified by histological or cytological criteria. Cytological criteria were applied in 21 cases, 13 (62%) of which were cromophobic and 8 (38%) of which were clear cell carcinoma. A total of 166 cases were histologically classified (Table 1). Papillary and tubular carcinoma were the most frequent subtypes (almost 70% of cases).

Not all selected studies performed an immunohistochemical (IHC) analysis. However, we extracted data from 161 cases, and in some of them more than one antigen was used. The tissue markers that produced positive staining in tumor tissues are listed in Table 2. 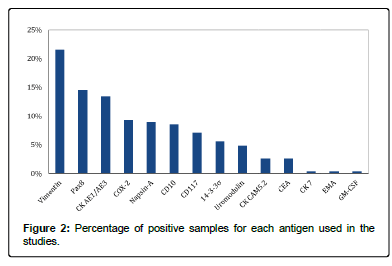 Figure 2: Percentage of positive samples for each antigen used in the studies.

This study comprised 258 cases. The sex ratio in the case reports was 2.7 males to 1 female, which is higher than that previously observed in dogs and humans [11].This unexpected ratio could be related to the small number of cases studied. This explanation is somewhat supported by the ratio (1.5:1) found in the cases included in the research articles, which was similar to ratios cited in the literature regarding dogs [8,12].

This study reviewed the histopathological and IHC findings of canine RCC reported in the last two decades. Twenty-one out of 258 cases used the cytological criteria for pathological classification of tumors, with the chromophobic subtype being the most common subtype. This finding is consistent with the literaturebut contrasts with the situation in humans, in whom the most frequently diagnosed subtype is clear cell carcinoma (almost 75% of human RCC) [13].

A total of 166 cases were classified by histological subtype, with papillary (33.3%) and tubular (33.3%) subtypes being the most frequent. IHC analysis was performed in 12 out of 21 studies, including 161 cases in which 14 potential RCC biomarkers for diagnosis and prediction were evaluated.

Vim is a type III intermediate filament protein commonly found in mesenchymal cells. It is not usually present in normal epithelial cells; however, it is highly expressed in various epithelial cancers including human RCC [14]. In the present study Vim staining was present in primary (chromophobic, tubular, solid and tubulepapillary) and metastatic lesions. Beyaz et al. [15] reported staining of this marker in primary renal tumors and also in the adrenal glands, regional lymphatic nodes, lungs and thyroid glands. Vim staining was used to identify neoplastic sarcomatoid cells as canine chromophobe RCC [14].

Pax8 is a transcription factor involved in the organogenesis of the kidney neural tube and the thyroid [15]. PAX8 is required for the survival of differentiated epithelial cells and has been considered a specific marker for primary and metastatic RCC (mRCC) [16]. The IHC staining of PAX8 in canine solid, papillary and tubular RCC tumors had an overall positive rate of 97.5% (39/40). Pax8-positive staining was observed in both primary and metastatic tumors [17].

CKs are proteins of cytoskeletal intermediate filaments, and are expressed in epithelial cells. In humans and animals, the differential expression of broad-spectrum and specific CK markers is useful for the diagnosis of RCC [18,19]. In dogs CK staining was found in primary tumors (papillary, papillary–cystic, tubulopapillary [3,12,15]. Moreover, strong positive staining of CK AE1/AE3 was detected in lung metastatic RCC [3].

COX-2 (cyclooxygenase) is an inducible enzyme that is key in the biochemical pathway leading to the synthesis of prostaglandins. Several studies have demonstrated the role of Cox-2 in human tumorigenesis and in domestic animals [20]. Thus, OX inhibitors might be a therapeutic target for certain cancers in domestic animals [21]. Furthermore, high levels of COX-2 may play a role in the modulation of neoplastic cell growth and its expression was considered an independent prognostic factor for canine RCC [21-23].

Napsin-A is an aspartic proteinase present in normal lungs and the proximal and convoluted tubules of the kidney [18]. Napsin-A immunoexpression has been reported in humans, mainly in papillary RCC. However, in dogs Napsin-A was found to be expressed in solid, papillary, and tubular RCC and also in metastatic tumors. [19].

CD10 is a cell-surface glycoprotein expressed in normal cells and also in a variety of tissues and malignancies [24]. In humans almost all clear cell RCCs and papillary RCCs stain positive for CD10, whereas other types of RCCs stain negative [14]. In dogs, Costa et al. [18] showed CD10 immunostaining in only 3 of 13 cases and there was no association with any specific histological pattern. Peat et al. [25] demonstrated that papillary RCC presented a weak and scattered reactivity and tubular and papillary RCC showed weak positivity with cytoplasmic expression. In metastatic RCC CD10 expression was observed in only 50% of cases.

CD117 is a transmembrane tyrosine kinase growth factor receptor that triggers signaling pathways that lead to cell proliferation and resistance to apoptosis. In humans, CD117 staining is frequently observed in chromophobe RCC (78% of cases). In this retrospective study CD117 positivity was found in chromophobe, papillary and papillary–cystic RCCs [8,14,26].

14-3-3σ is a member of a family of highly conserved acid proteins. 14-3-3σ is only expressed in epithelial cells and has a role in cell cycle checkpoint regulation and apoptosis. 14-3-3σ expression is low or absent in many human cancers, suggesting its role as a tumor suppressor [27]. On the other hand, other studies have associated overexpression of the protein with malignancy [28-30]. Immunohistochemical analysis revealed the absence of 14-3-3σ immunolabeling in normal kidneys and neoexpression in 37.5% of canine RCCs. Furthermore, 14-3-3σ was positively associated with a shorter survival time [28].

Uromodulin is a glycoprotein expressed exclusively by tubular cells lining the thick ascending limb of the loop of Henle of the mammalian kidney. It has been used to detect renal cell tumors in humans, cattle, and dogs.Costa et al. [19] demonstrated that papillary, tubulopapillary, papillary–cystic, solid and sarcomatoid subtypes stained for uromodulin. The same authors tested CEA as a possible marker. CEA is an oncofetal glycoprotein that is overexpressed in adenocarcinoma and is used as a circulating marker in human colorectal cancer [31]. The authors found only moderate immunoreactivity in three solid RCCs.

EMA is a transmembrane protein with a large extracellular tandem repeat domain and its expression was noted on the luminal surfaces of the distal tubule and collecting duct epithelium [12]. Its expression was detected in renal cell carcinoma tissue and skin metastases [12]. GM-CSF, is an inflammatory cytokine that has been shown to be important for the survival, proliferation, differentiation, maturation and functional activation of hematopoietic cells. It is thought to support paraneoplastic leukocytosis in the animal [32].

The present study showed that Vimentin, Pax8, CKs (CK AE1/ AE3, CK CAM5.2 and CK7), COX-2, Napsin-A, CD10 and CD117 were the most commonly used diagnostic biomarkers, corresponding to 80% of cases. Moreover, 14-3-3σ and COX-2 were also used as a predictive biomarker for canine RCC.

The author(s) declared no conflicts of interest with respect to the research, authorship, and/or publication of this article.